Rear-biased SUV is more than just a Giulia on stilts

Alfa Romeo’s wilderness years seem to be drawing to an end.

The first hint of a renaissance was the Giulia sedan – the ripping 375kW QV is a BMW M3 beater. And now, in the new Stelvio Q, Alfa has delivered the fastest production SUV you can buy. That’s the claim, anyway. Alfa bases its bold claim on the Stelvio QV’s eye-opening 7:51.7sec Nurburgring lap time, which is an SUV record. 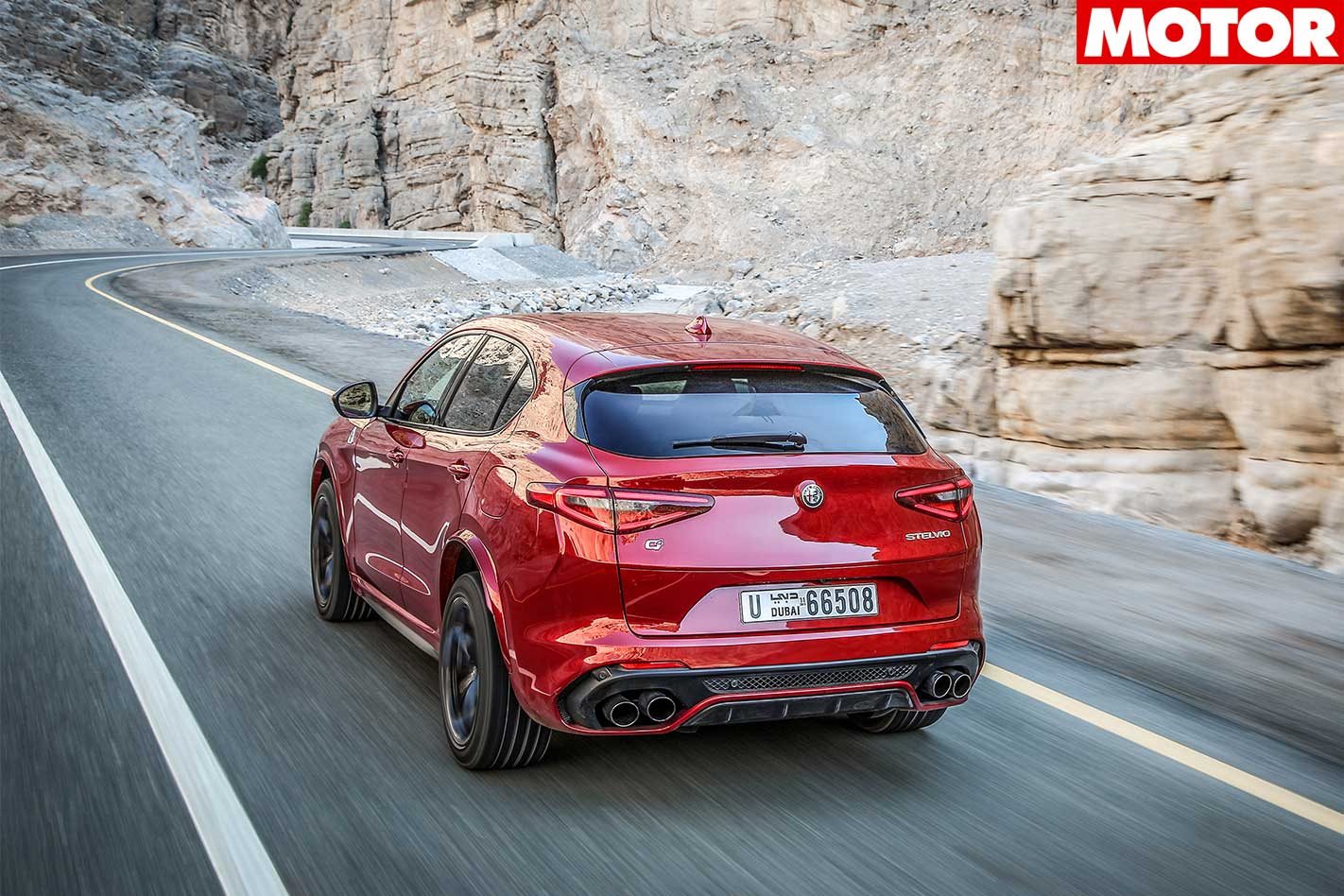 Designed and developed by the same team that brought us the class-leading Giulia QV, the high-performance Stelvio is dripping with genuine sports-car hardware. The 2.9-litre twin-turbo V6 and eight-speed automatic gearbox are borrowed from the Giulia – with specific calibration and ratios – but here drive is sent to the road by Alfa Romeo’s Q4 all-wheel-drive system.

In normal driving, 100 per cent of the torque is sent to the rear wheels and only when they begin to slip is drive shunted forwards. Even then, only 50 per cent can be diverted to the front axle, so it’s a very rear-biased system.

The car is suspended by double wishbones at the front and a multi-link set-up at the rear, with adaptive damping. The engine is mounted mostly behind the front axle line to aid weight distribution, and the use of carbon fibre and aluminium panels keeps weight to a minimum. Still, at 1830kg, the Stelvio Q is no featherweight.

There are various drive modes, including Eco that reduces fuel consumption by shutting off three cylinders – although this can also happen in Normal – and Dynamic that sharpens throttle response, reduces gearshift times, tightens up the dampers and adds weight to the steering. Race mode turns everything up another notch while standing down the stability control system and, notably, it is possible to switch the dampers back into an intermediate setting in Race. 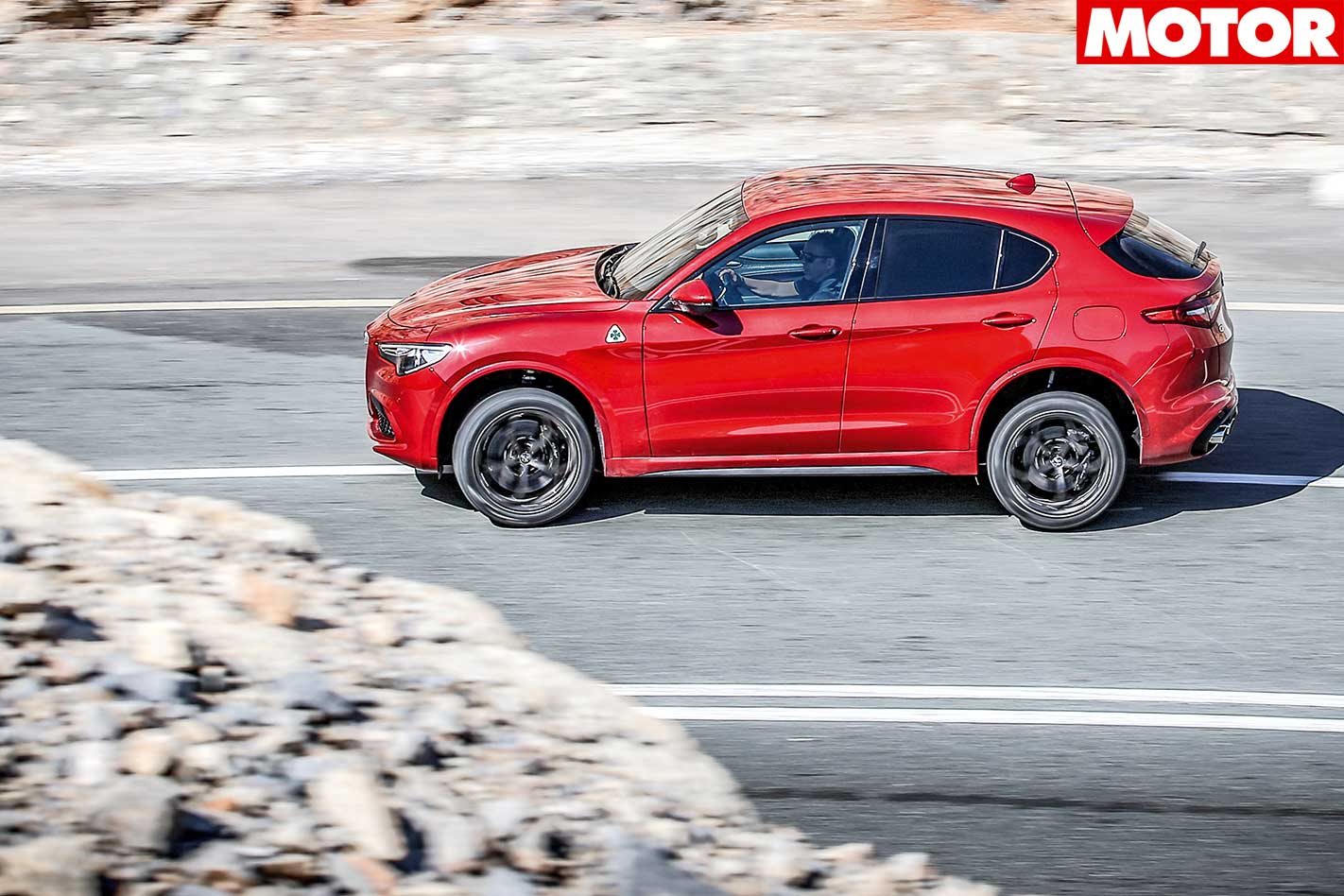 There are several very powerful SUVs on the market that are colossally fast in a straight line and just about composed enough in bends, but there aren’t many that are genuinely entertaining to drive. The Stelvio Q is undoubtedly one of the few.

Inevitably, its high ride height, chunky kerb weight and lofty centre of gravity mean it’s nowhere near as planted or as responsive as the Giulia, but there is a remarkable level of precision and body control here. The steering is direct, quick and very intuitive, and the front end finds reasonable turn-in bite. The car will understeer when you really chase it, but there’s enough front-end grip to carry proper sports-car-rivalling pace on a winding road.

The four-wheel-drive system makes light work of transferring all that power and torque to the road. If you’re really clumsy with the throttle you’ll upset the car, but with a little care all four tyres hook up perfectly and slingshot the car away from the apex. 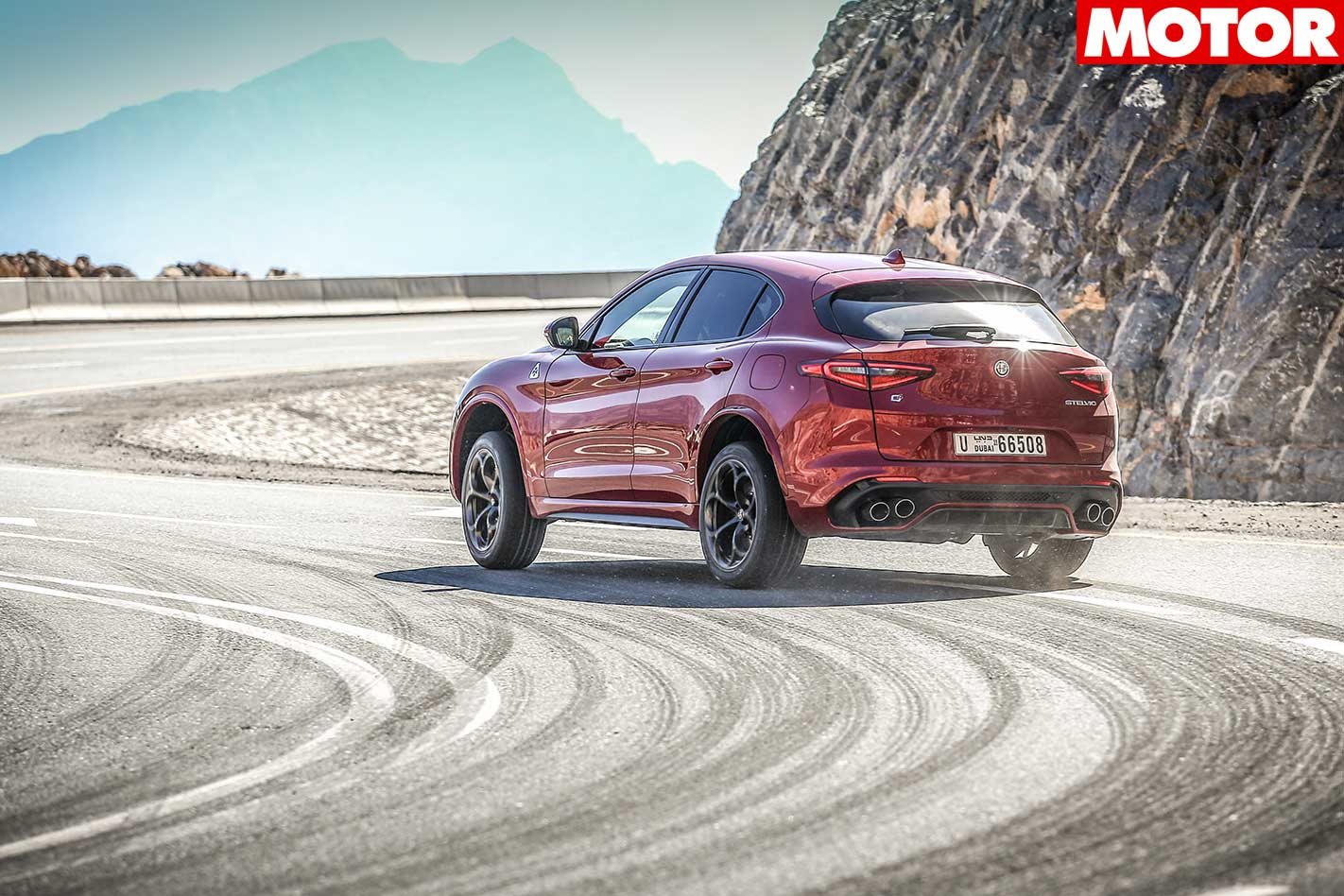 There isn’t the on-throttle adjustability or playfulness you get in the rear-driven Giulia but, thanks to the torque-vectoring trickery, you do get very positive drive away from the apex and a level of agility that seems at odds with the raised seating position. The chassis is also poised enough that you can adjust your line mid-corner.

On very smooth Emirati roads, where we drove it, the Alfa’s ride was settled and composed, but we’ll have to wait and see how well this car deals with typical Aussie tarmac. 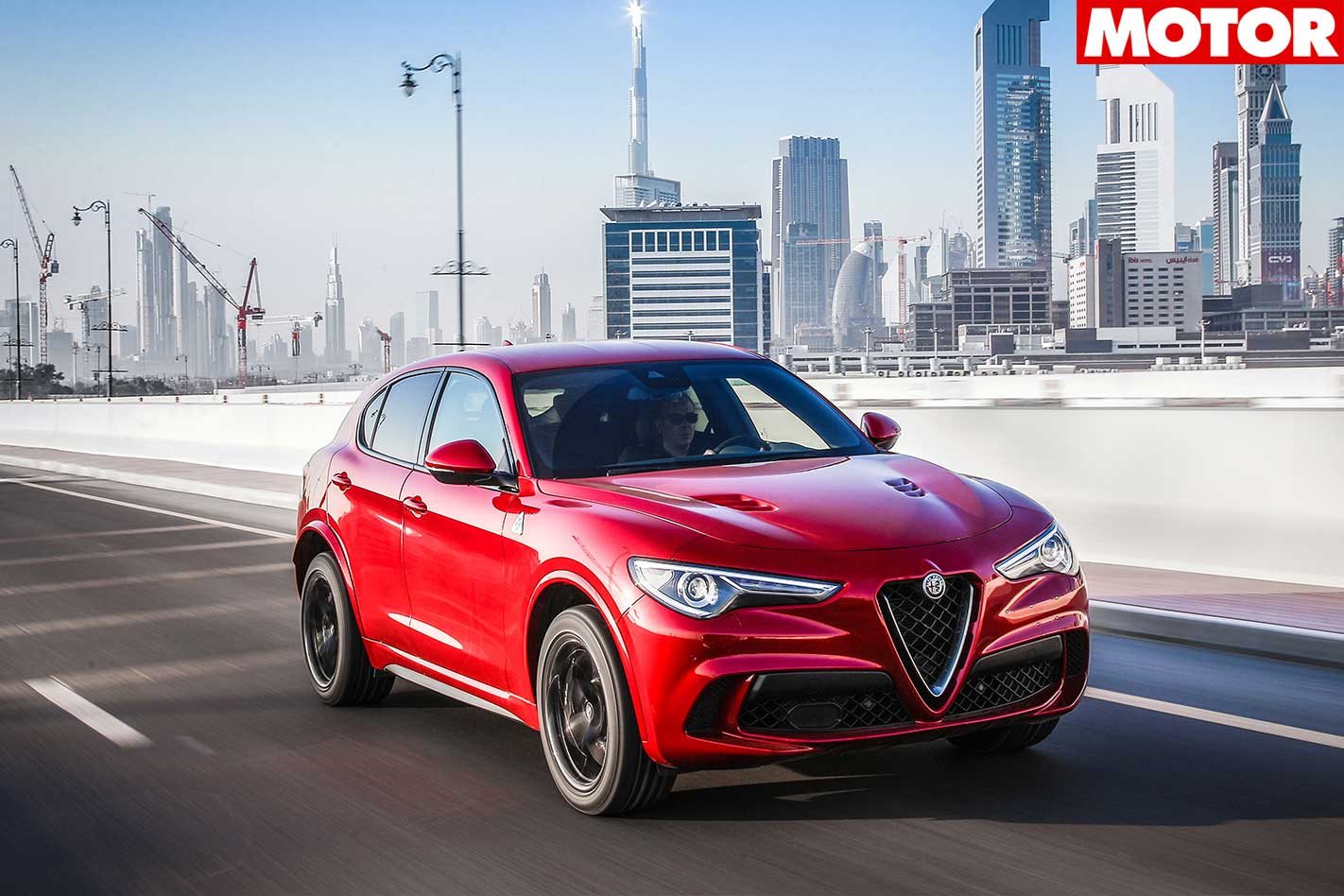 Just as it is in the Giulia, the 2.9-litre V6 is a sharp, responsive and rev-hungry unit that delivers massive straight-line performance. The soundtrack is even quite evocative, which is unusual for a turbocharged unit. The auto ’box, meanwhile, is plenty quick enough – in Race mode it’s almost as snappy as a dual-clutch transmission – and it’s smooth and refined at low speeds too.

Where the Stelvio falls short of its competition is within the cabin. Some of the plastics are a touch brittle and the switchgear looks and feels mainstream rather than premium, but there’s nothing offensive about it. The seating position is very good, though. 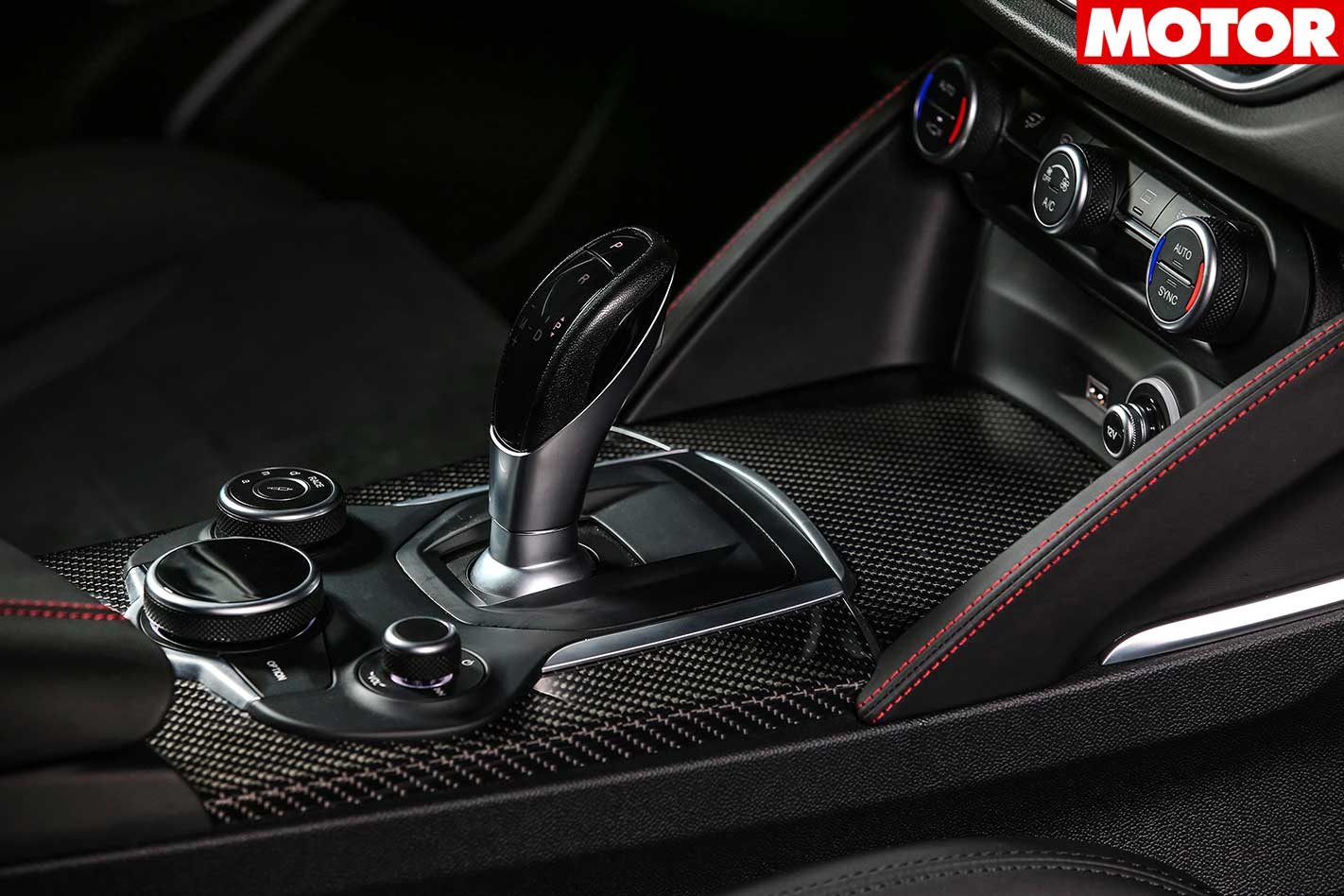 The Stelvio Q is genuinely fun to drive along a demanding road, but if that sort of engagement really matters to you, you’ll be better served by the equivalent Giulia. However, if you really must have a hatchback boot and lofty driving position that comes with an SUV, the Stelvio Quadrifoglio would make a very fine substitute. 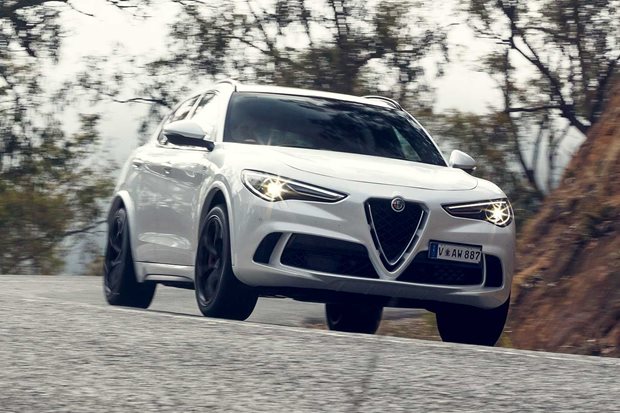 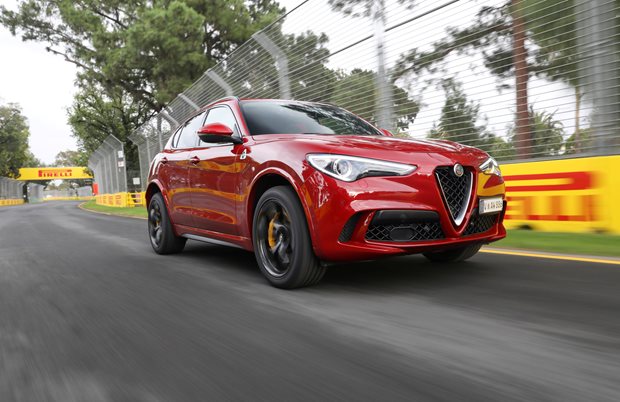 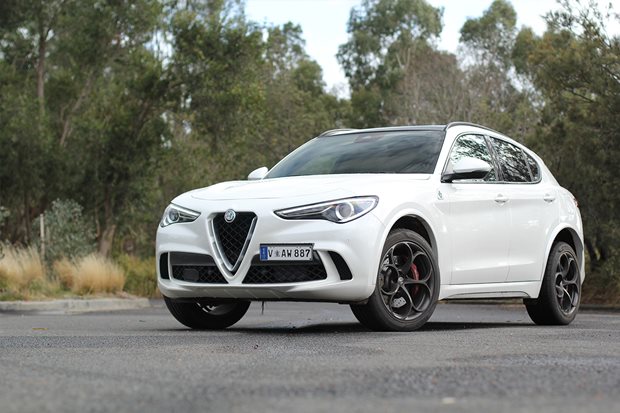 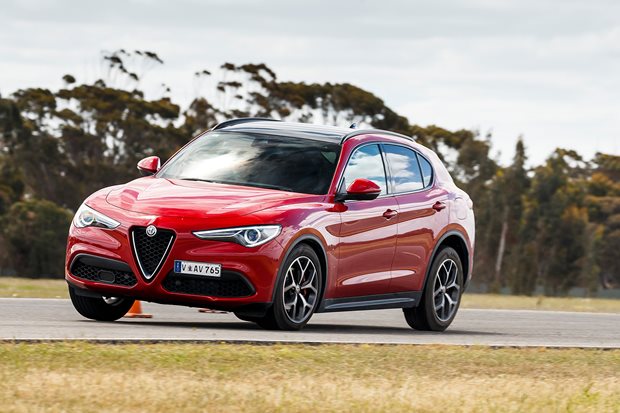 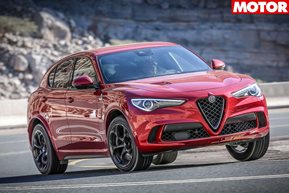