As far as the M3 is concerned, the Club Sport (CS) could be ‘the one’.

With the G20-generation rumours hinting at electrification (for a total output close to 368kW) and all-wheel drive, the $179,900 CS could be the last hurrah for the F80 M3 as we know it. Plus, no more than 1200 examples of the M3 CS will leave BMW’s Regensburg. 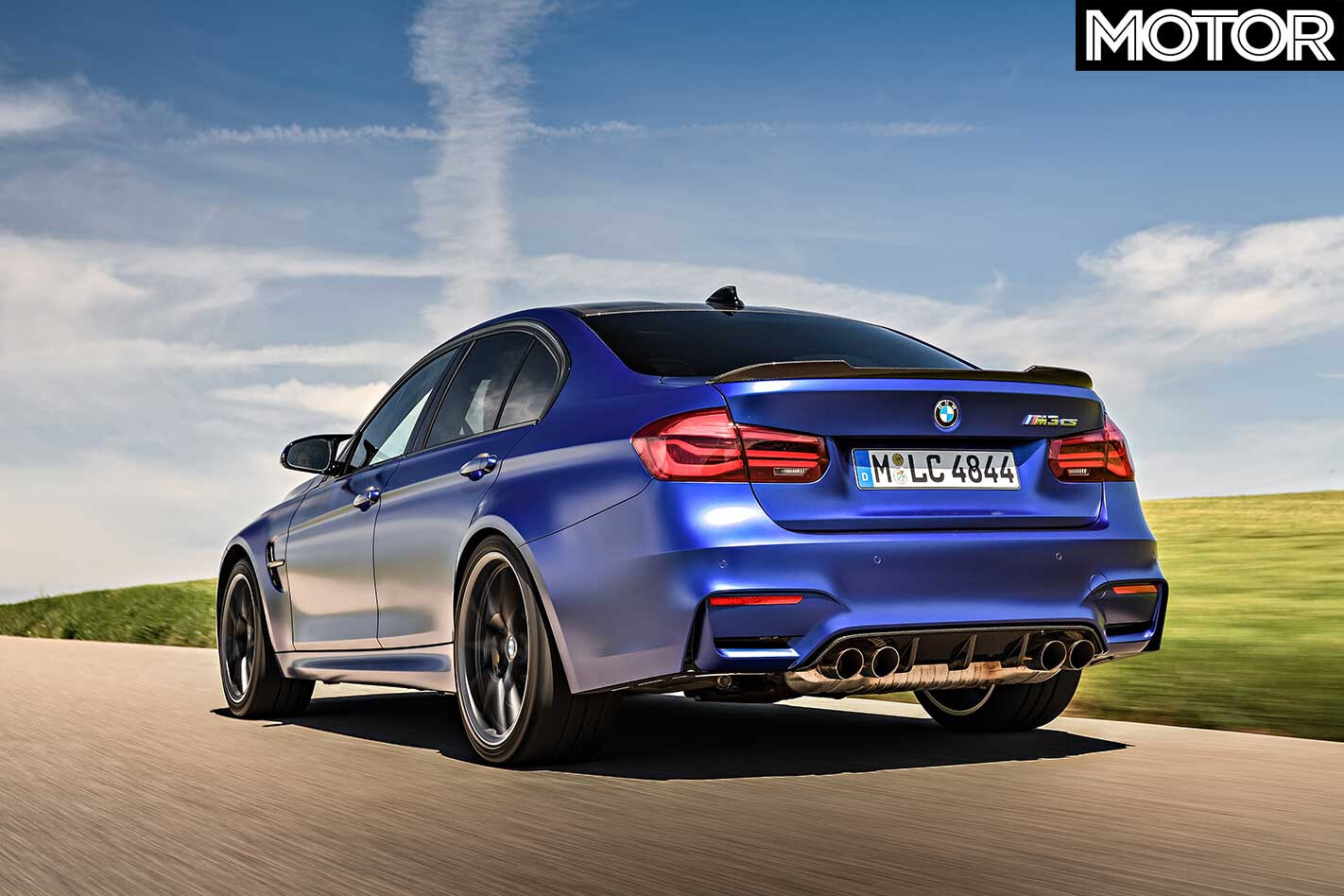 Still, given how cheaply you can pick up an M3 Pure, the CS will have to prove itself. What you’ll get is basically the same formula as the M4 CS. The body features a profiled carbon-fibre Gurney flap to match a similarly aggressive front splitter.

Painted on top, but naked underneath, so too is the bonnet full of carbon-fibre-reinforced plastic (CFRP) – it’s 25 per cent lighter than that of a standard four-door M3. And you can barely get a cigarette paper between the rear wheel arches and the semi-slick Michelin Pilot Sport Cup 2 tyres. They’re wrapped around lightweight forged alloy wheels, 20-inch at the rear and 19-inch at the front.

Inside the persona is hardcore, even if you don’t get the lightweight door cards from this car’s M4 sibling (which is a bit of a bonus).

Despite an asking price to make you wince, BMW’s S55 3.0-litre twin-turbocharged straight six doesn’t benefit from the water injection system of the M4 GTS. It doesn’t need that technology, developing only 7kW more than the 331kW you’ll find in a M3 Competition Pack. And honestly, does a sedan capable of reaching 100km/h in just 3.9sec before running on to a governed 280km/h need to be any quicker? No, but it could be lighter.

Strangely, this car’s substantial use of CFRP results in a saving of only 10kg over the Competition Pack car, but the centre of gravity is said to be usefully closer to the road.

Given the tyres in question, warm weather plays heavily into this car’s hands, and straight away the precision with which an M3 CS turns into corners is startling. Indeed, it’s only the trio of steering modes, those wheels and tyres, and the calibration of the electronic stability control and the active M differential in the rear axle that separate Club Sport from Competition.

The rack and its gearing remain unchanged, as do the spring rates and suspension geometry, so there is still roughly 0.5-degree more negative camber than on the standard M3. This is now a chassis of extraordinary composure, resulting from reserves of tightly controlled pliancy than you might imagine.

With less unsprung mass, there’s a predatory manner to direction changes, and a palpable feeling that the chassis sets itself a touch earlier during the entry phase than a M3 Competition Pack does.

Our test car has BMW’s optional carbon-ceramic discs (denoted by gold calipers) and they feel pleasingly light on assistance, biting firmly and progressively and permitting you to lean increasingly hard on a front axle that almost never wilts into understeer.

Such are the adhesive properties of the tyres, in fact, that third-gear sweepers can rapidly boil down to mind over matter, and you get the gratification of feeling that differential, recalibrated for vast grip, subtly nudging the nose inwards under power. The M3 CS then explodes out of corners with just a hint of squat and almost mid-engined poise.

Aside from a seven-speed dual-clutch transmission that seems reluctant to downshift early, our only objective complaint is that while the sensory relay from contact patch to steering rim is improved, it’s still a marginal affair.

The engine has never been the most affable device, although in this application, it barks viciously through a sports exhaust. It also seems to punch harder through the mid-range, which is the result of an improved electronic mapping. In the face of more powerful rivals, the M3 has long wanted for greater in-gear shove at moderate crank speeds, and now it has it.

This F80 M3 has become deeply intuitive and likeable. As you may have surmised, from a driver’s perspective, the M3 CS is the most rewarding product M division currently offers. It is a deadly serious product, less playful or extroverted than an Alfa Romeo Giulia QV or Mercedes-AMG C63 S, but equally usable and fulfilling. It would also run rings around those cars at a track day against the clock.

Yet, in the cold light of day, even such a phenomenal bandwidth is not enough to justify the premium over an M3 Competition Pack. Then again, the contentment of owning ‘the one’ would linger long after the sting of that early expense had faded.

Rating: 4 out of 5 stars
Like: The best M3 yet, impressive level of agility and body control, strong engine
Dislike: Price of entry, Cup 2s can be hard to ‘switch on’ in cold conditions, steering feel