Carbon-ceramic brakes used to be the preserve of only the most exotic of cars.

The technology was originally developed for the high-speed rail industry, but the first auto application was unveiled at the 1999 Frankfurt motor show. Its production debut came in 2001 as an option on the Porsche 911 GT2, before being adopted by the early-2000s supercar trio of the Ferrari Enzo, Porsche Carrera GT and Mercedes-McLaren SLR.

There’s a reason that until recently carbon-ceramic discs have only been available at the upper end of the market, and that’s because the production process is extremely time-consuming. In fact, it can take up to 20 days to produce a composite disc. Despite this, like all technology, it has slowly filtered down to the point where the lightweight stoppers are an option on the likes of the Audi RS3. Early attempts at carbon-ceramic brakes had some pretty serious flaws. Gordon Murray investigated using them on the F1 but couldn’t get the brakes to work effectively at the wide range of temperatures experienced by a road car. Composite brakes work best when hot, so braking performance at low temperatures wasn't great.

Low-speed pedal feel was also poor, with early Lamborghinis and the Merc SLR in particular requiring an ‘all or nothing’ approach to braking. Porsche and Ferrari got on top of this quickly, however, despite assurances that carbon-ceramic brakes would last the life of the vehicle, owners quickly found themselves with five-figure replacement bills when their cars were driven hard on circuits. Nonetheless, like every technology, things improved and the latest carbon-ceramic braking systems from Porsche, Audi, Ferrari and AMG are stunning in their power and resistance to fade.

1. RAW INGREDIENTS
The raw materials of a carbon-ceramic brake disc are a heat-mouldable silicone resin and chopped bits of carbonfibre, which are combined in an aluminium mould to create the shape of a brake rotor. Aluminium inserts are hammered into the side of the mould to create the ventilation slots.

2. PRESSING MATTER
A press then applies 20,000kg of pressure to this mixture and heats it to 200 degrees Celsius, which compresses the carbonfibre and transforms the resin into plastic. The disc is then dunked in water to cool. 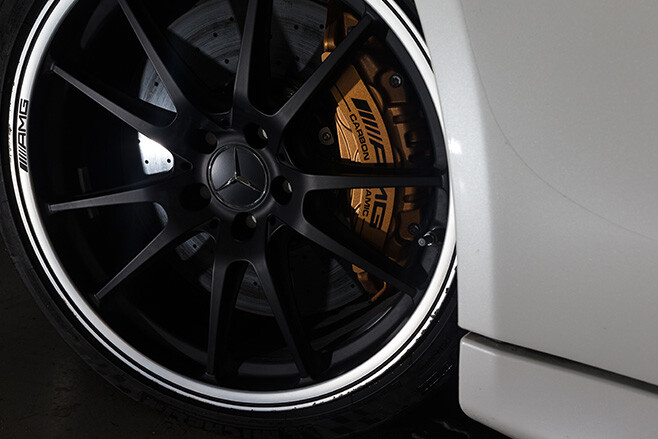 3. FEELING THE HEAT
The disc is gradually heated to 1000 degrees Celsius over two days, which transforms the plastic into carbon. More silicone powder is added and it's back into the oven, this time heated to 1700 degrees over 24 hours under vacuum, melting the silicone and sucking it into the disc ring which creates silicone carbide.

4. FEEL THE BURN
Oxygen burns carbon at high temperatures. You may have seen this occur during F1 races, with clouds of black dust emerging from wheels under heavy braking as the discs disappear. To prevent this each disc is painted to prevent oxidisation, which extends the life of the brakes under extreme temperatures.

5. WHAT A GRIND
The paint leaves a white residue when cured, so the final step is to remove this, polish the disc and inspect it at a micron level to ensure there are no flaws. Then it's time to fit the hats and attach to the car.

FOR THE vast majority of drivers, carbon-ceramic brakes are unnecessary. Unless you're a regular track-goer, the only difference you'll feel is a slight improvement in ride quality, as composite brakes are lighter and therefore reduce unsprung weight.

However, if you do decide to take the plunge, you'll need fairly deep pockets. At the supercar end of town, carbon-ceramic brakes are increasingly common standard equipment – all Ferraris, for instance, come so equipped, as do Porsche's Turbo S models.

AMG offers front carbon-ceramics for $9990 on the C63, which are signified by gold calipers. BMW's M Division also uses gold calipers to identify cars so equipped, but charges $15,000 for the privilege on the M3/M4, though it does throw in composite rears as well.

Porsche, the company that started it all, uses yellow calipers for PCCB-optioned cars, and you'll need $19,990 to add these to your 911 or $17,990 for your Boxster or Cayman. Bentley likewise charges $20,000 for the ultimate in braking while Audi asks for $20,940 on the RS6/RS7 but helpfully writes 'ceramic' on the grey calipers to remind everyone that you are as brave with your financial decisions as you are with the middle pedal.

Just remember, they cost just as much at replacement time.