It’s loud, thirsty and expensive, but so what?

The new 380kW Giulia Quadrifoglio Verde (QV, Italian for four-leaf clover) is a sedan on steroids and Alfa Romeo’s answer to the Audi RS4, BMW M3 and Mercedes-AMG C63 S. It epitomises all that can make Alfa great again – if it stacks up.

Dubbed Project Giorgio, the new Alfa Romeo Giulia was delivered in 33 months, three months ahead of schedule. “Giulia is only the beginning,” says new R ’n’ D director, Roberto Fedeli. “It is instrumental in redefining the brand for its climb to former glory.” But enough small talk. Strapped into a leather and Alcantara-swathed carbon seat, behind a leather-wrapped multi-function steering-wheel, I push the red start button, choose Sport on the DNA drive mode selector and join the ‘Lange’ circuit of Alfa’s Balocco track, a long loop composed of curving country roads, dips and crests and surface changes.

The clutch is light and positive, but Aussie buyers will be denied its use as only the eight-speed auto will arrive locally. This news will disappoint purists, but it’s not the end of the world as the six-speed manual seems better at stirring emotions than changing ratios swiftly and can’t match the self-shifter’s rapidity. 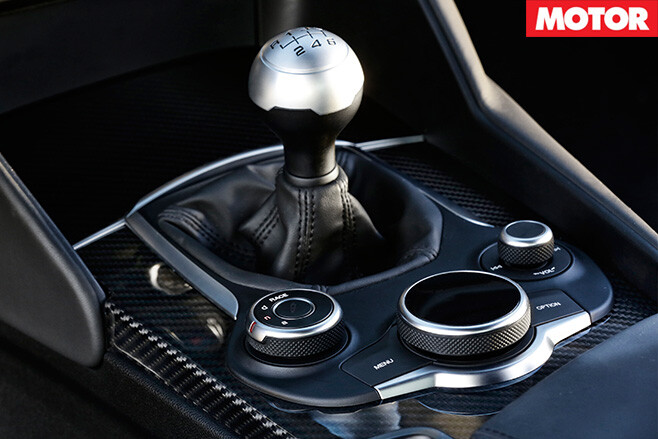 In first, second, and third gears, the engine spins to the redline quickly, keeping your right hand busy working the aluminium-knobbed shifter. Fourth takes the Giulia into triple-digit territory, fifth is the perfect autobahn ratio, and we only need sixth on the high-speed oval.

Selecting Race on the DNA controller instantly morphs the Alfa into attack mode, disabling the traction and stability controls and engaging the quickest steering calibration, tautest damper setting, and quickest throttle response. And the broadest grin.

Even with its electronic safety net fully deactivated, the Giulia QV is no black widow ready to punish the driver for the slightest mistake. While it can carry serious speed down straights and through corners, this high-end Alfa is a positively seamless piece of kit with the added security of optional carbon-ceramic brakes that bite hard and fast, lap after lap. 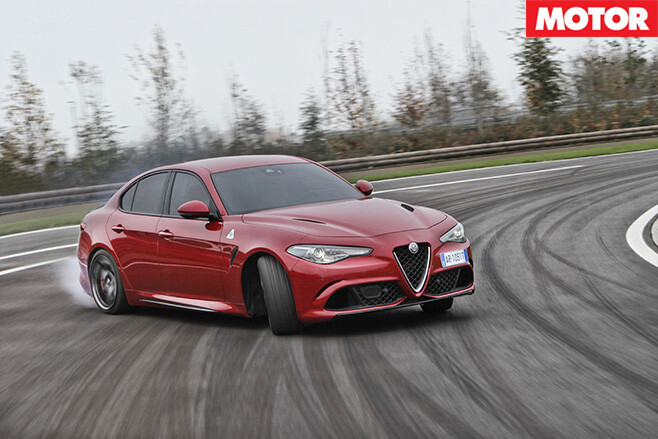 We’re still in Race as we join the inner handling circuit and the fast-dying Pirellis are objecting loudly at every apex. The electric power steering feels meaty and sharp and relays all the information you need while sorting out irritations like longitudinal grooves and transverse expansion joints. Steering weight, damping and ratio are spot-on.

Mentally comparing the Giulia QV with its Teutonic rivals, the M3 feels edgier, the RS4 lacks that reassuring connectivity, and the C63 AMG is even looser overall.

But compared to its German opposition, the shoe-string budget Giulia QV is missing the latest technical gadgetry like head-up displays, LED headlights, switchable anti-roll bars, rear-wheel steering and the latest driver assistance systems. There will be an all-wheel drive version, though again not for right-hand drive markets. 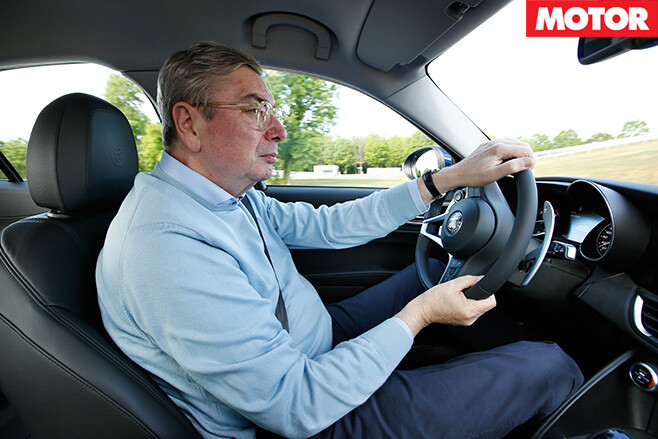 On the credit side, the QV does get an intuitive infotainment system with a multi-directional controller (instead of the increasingly popular touch screen), Active Aero Splitter, Forward Collision Warning, Autonomous Emergency Braking, and rear view monitoring and warning.

As far as perceived quality is concerned, though, the Italian contender has some catching up to do. It’s not so much the layout of the cockpit and available features which disappoint, but the ho-hum surfaces and seven-out-of-10 build quality. Measuring 4639mm in length, the Giulia QV is a proper four-seater with a 480-litre boot and a 58-litre fuel tank and Alfa claims this top-of-the-line QV will average 8.5L/100km. Not the way we’re driving it it won’t.

Despite its extrovert styling and startling performance, the new Giulia QV doesn’t need a driver with a sixth sense to match wits with it. At the limit it remains calm, the chassis couldn’t be more composed, and the controls are cooperative.

Even in Race mode, when driver input versus car response can tread a fine line between high-speed satisfaction and embarrassing pirouette, the live-wire rear axle can be reliably intercepted by the relaxed rather than ultra-quick steering, and progressive rather than ultra-sharp throttle response. 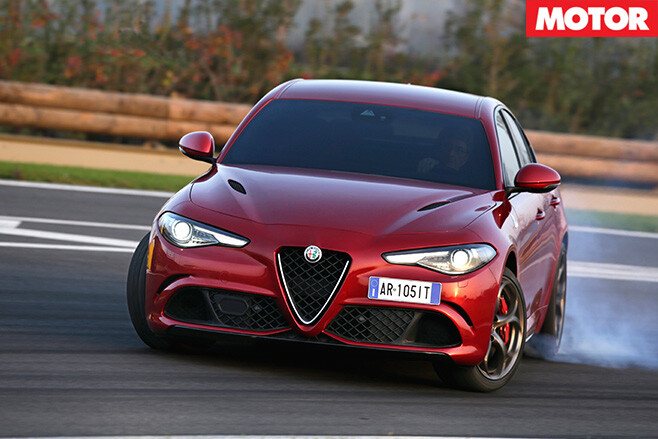 The result is a sweet and safe handling balance which helps builds up the confidence it takes to fully explore the car’s remarkable potential. In this respect, the Alfa Romeo Giulia QV is more like AMG’s C63 than M Division’s M3, but throws in ride comfort that bests Affalterbach’s finest.

It’s that subtle extra measure of compliance and composure that makes the Giulia QV a winner.

LIKE: A real return to form for the Alfa brand
DISLIKE: Build quality, could be pricey