While SRT’s designers and engineers were busy developing the earth-scorching Demon, they also discovered that some of the necessary changes could be translated to the Hellcat.

After transferring the Demon’s 9cm wider bodywork to the Hellcat, it’s now available in Widebody flavour, which may be the best way to enjoy a Hellcat.

The increased width of the Challenger SRT Hellcat Widebody gives it a distinctive presence. That width lends the Dodge the proper broad shouldered look of a 527kW muscle car. Subtle in some colours, but it’s downright menacing in black.

The new flares aren’t tacked on, in the traditional JDM style, but carefully shaped and properly manufactured. Even the American-spec side markers are shaped to flow into the new wings. The Demon’s wider splitter is another carry over to the Widebody. 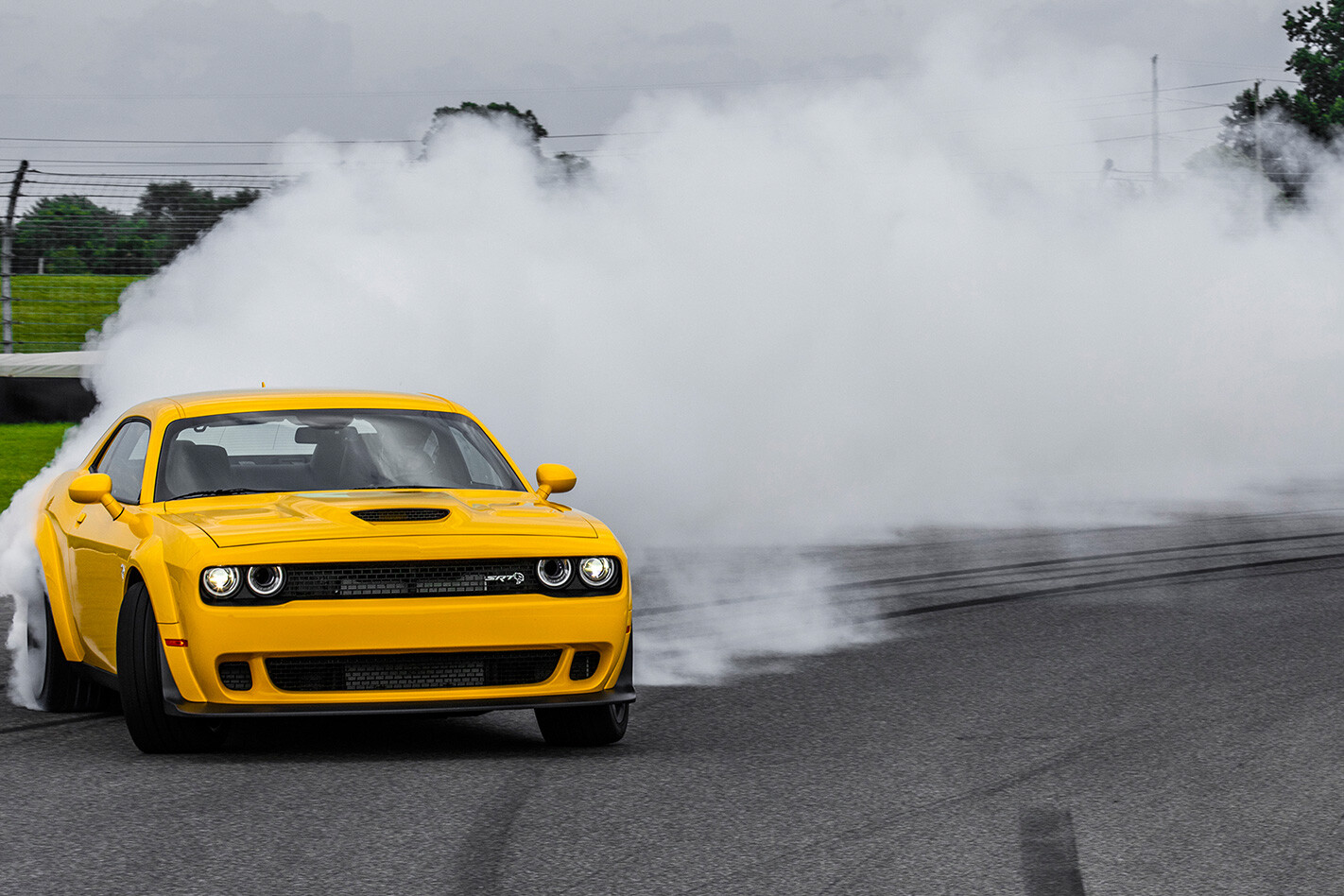 While the Demon rolls on 18-inch drag-spec wheels and tyres, the Hellcat Widebody isn’t so constrained. SRT engineers were able to focus on using all of that newfound width under those wings.

There’s an all-new 20-inch wheel design for 2018 that’s 11 inches wide, and all of that width is pushed outward. Mark Trostle, head of Performance Vehicle Exterior Design, is known to enjoy washing his own cars, and every shape is important, including the wheels. Thus, the design of the new wheel is not just attractive, but open and accessible for those who wash their own.

With eleven inches of wheel width to use, SRT went with the latest generation Pirelli P Zero tyre, sized 305/35ZR20 in all four places, a significant increase in width from the standard Hellcat’s 275mm rubber and considerably more advanced than the old Hellcat tyre. 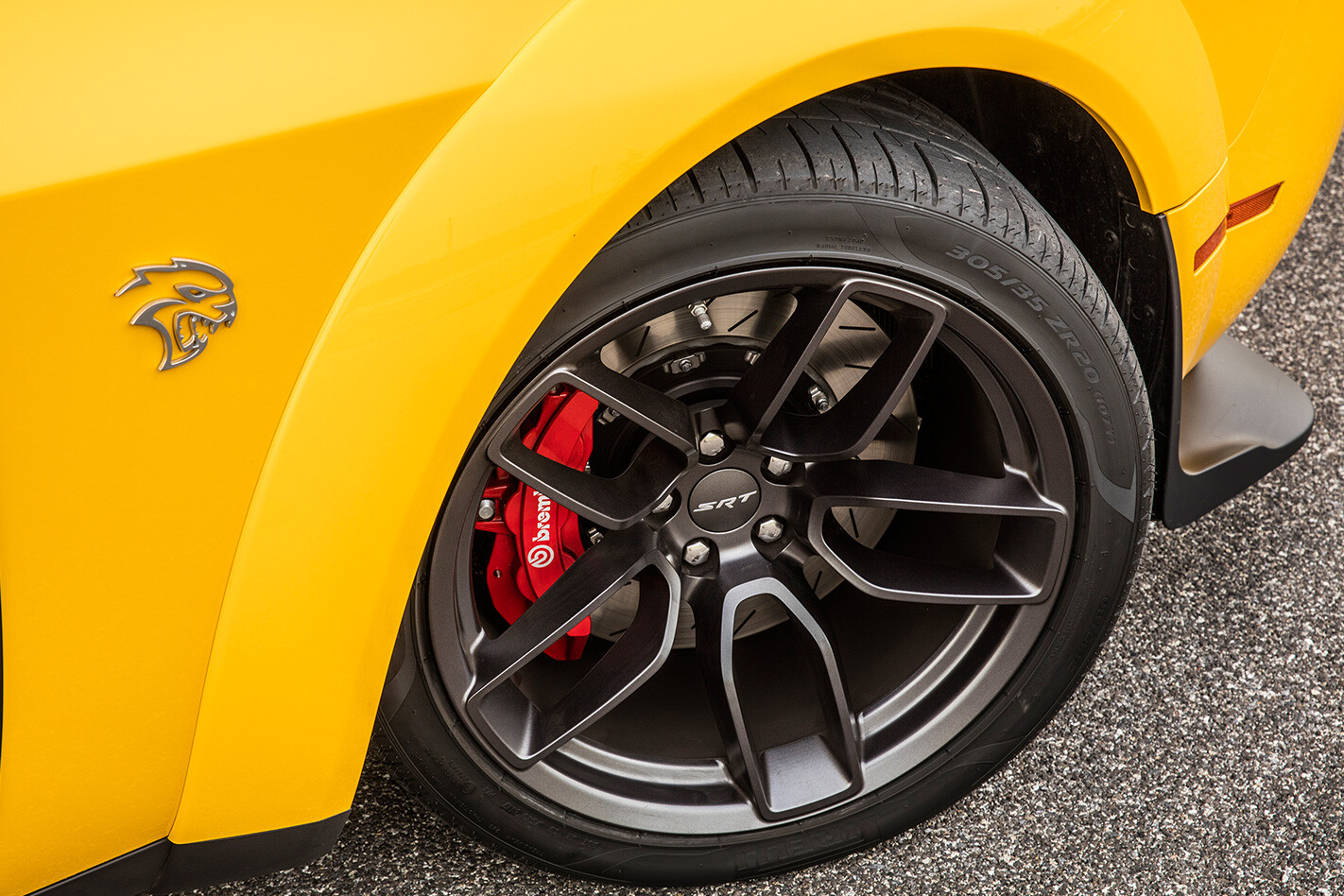 With greater tyre loads being generated through the suspension, SRT chose to switch to an electric power steering system, similar to that found in its big brother, the Demon. The standard Hellcat retains its original hydraulic set up.

Electric power steering gives the Widebody some additional flexibility, permitting distinct assist levels of assist in the different SRT drive modes. Track is perfectly suitable to circuit work, Sport has mid-level assist, while the base mode offers the lightest steering effort with the greatest level of assist. 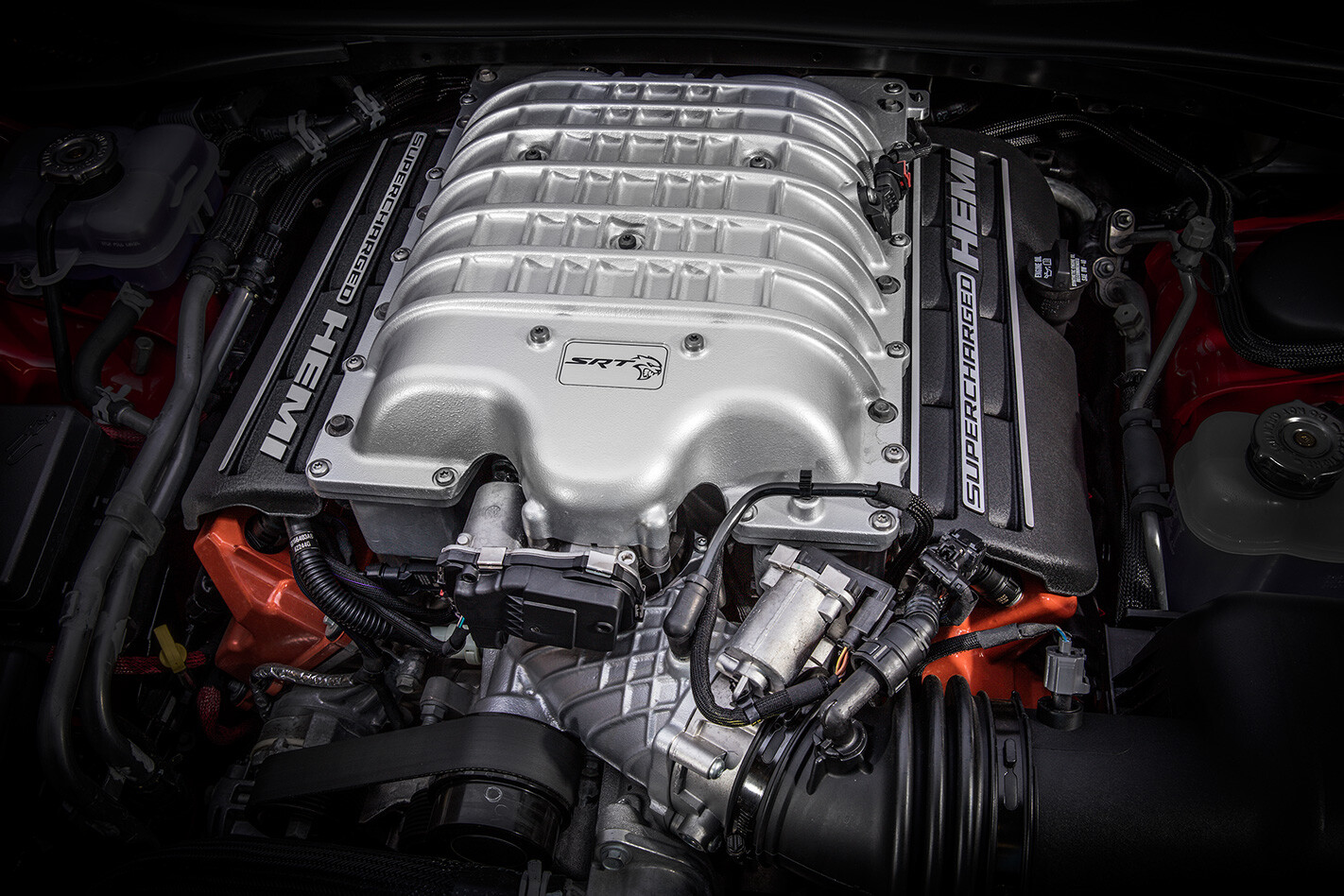 That extra rubber and additional track width translates into more performance, making the Widebody quicker around a racing circuit, but also more enjoyable on the road. Dodge says that the new tyre and track width are worth about two seconds per lap over their home 2.7-kilometre road course.

That new tyre and wider track also translates into a 0.3 second better quarter mile time, significantly better lateral grip (0.97G for the Widebody versus 0.93G for the standard Hellcat), and a slight improvement in zero to sixty times, which is down to 3.4 from the Hellcat’s 3.5. Not that we could notice, to be honest, because the thrust of that supercharged HEMI is so enjoyable.

What we did notice, however, was not just the increased levels of grip, but a new level of confidence through high speed corners. Around portions of Indy’s Grand Prix circuit, it only took a handful of laps before we started confidently sliding the Widebody through mid- to high-speed corners. 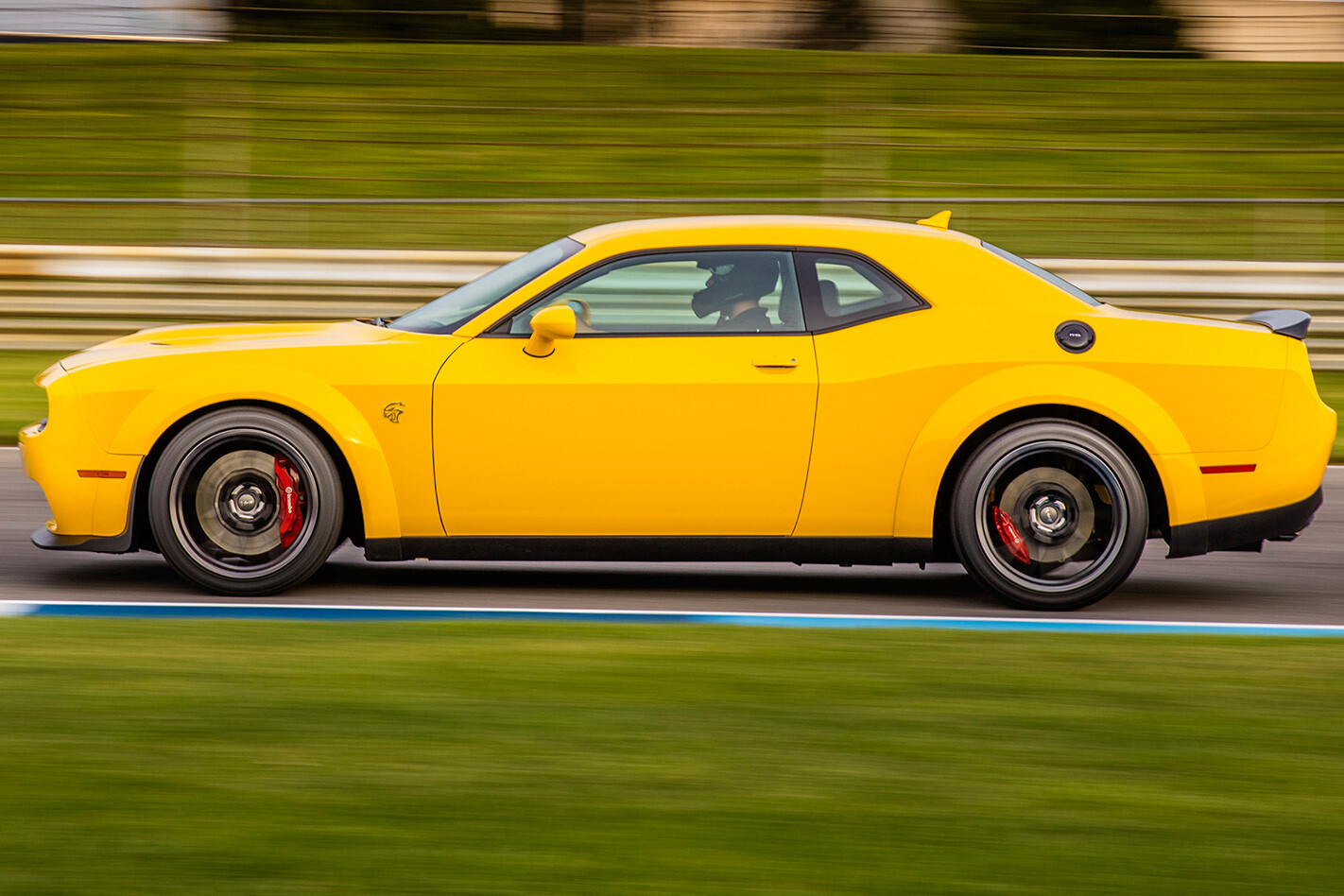 Where the Hellcat earned its reputation as a tail happy musclecar, the Widebody gives the drivers significantly more confidence. There are no handling surprises and the additional grip is entirely usable.

As it turned out, the wider track and additional grip from the new Pirelli P Zero suited the existing Hellcat’s suspension, traction, and stability system calibrations. No changes were made to spring or sway bar rates, nor to any of the settings for the Hellcat’s adaptive dampers. 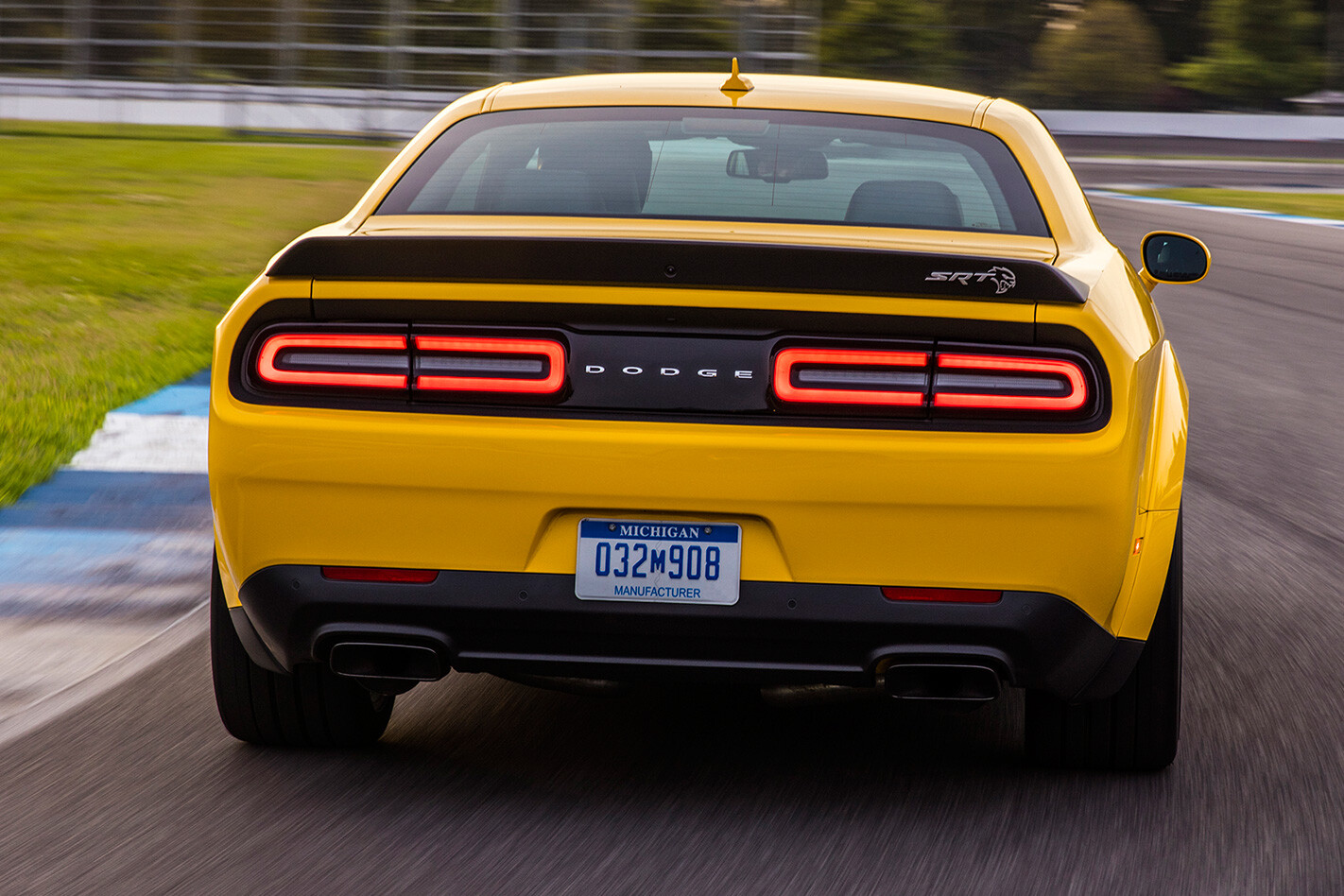 Given the complexity of those systems, it may seem surprising that changes weren’t necessitated, but behind the wheel the Widebody remains a Hellcat, though with a much better resolved handling set up that drivers will appreciate.

Currently, there are no plans to officially import the Widebody to Australia, but that won’t stop some adventurous blokes from converting some to right hand drive spec. If a refined and massively quick muscle car is your sort of ride,