We get behind the wheel of Porsche's ballistic 991.2 GT3 RS at the Nurburgring

The ultimate incarnation of the naturally-aspirated Porsche 911. The circuit-oriented GT3 RS marks the last hurrah for the 991-generation of the 911.

When Porsche asks if you'd like to drive their new 911 GT3 RS at the Nurburgring, it's unlikely you're going to say no. Okay, so it was the GP circuit rather than the Nordschleife, but we're not complaining.

High-end track specials like the Ferrari 488 Pista and the Lamborghini Huracan Performante might also make a compelling claim on your dollar.

The GT3 RS has long represented Porsche at its very best. Shorn of the compromises imposed on its humbler road cars, the RennSport cars showcased Weissach's competition savvy in a road legal package, perfect for soaking up trackday punishment. This latest 991.2 generation car is an evolutionary version of that which preceded it, but the incremental changes have added up to a major improvement. If you've ever wondered what it's like to drive a GT3 Cup racer, you're going to get a pretty good idea of it in the spectacularly capable GT3 RS. It's a masterpiece.

I'M REALLY not sure where to go with this one. To give you the full breakdown on what Porsche has done to improve the latest 911 GT3 RS requires a cool head, a slightly nerdy affinity for historical detail and the analytical focus of an engineer. The trouble is, I've just been poured out of the car after a series of laps of the Nurburgring's GP circuit, a sweaty, gibbering wreck. This 383kW berserker will do that to you. Time for a sit down and a few minutes to decompress. 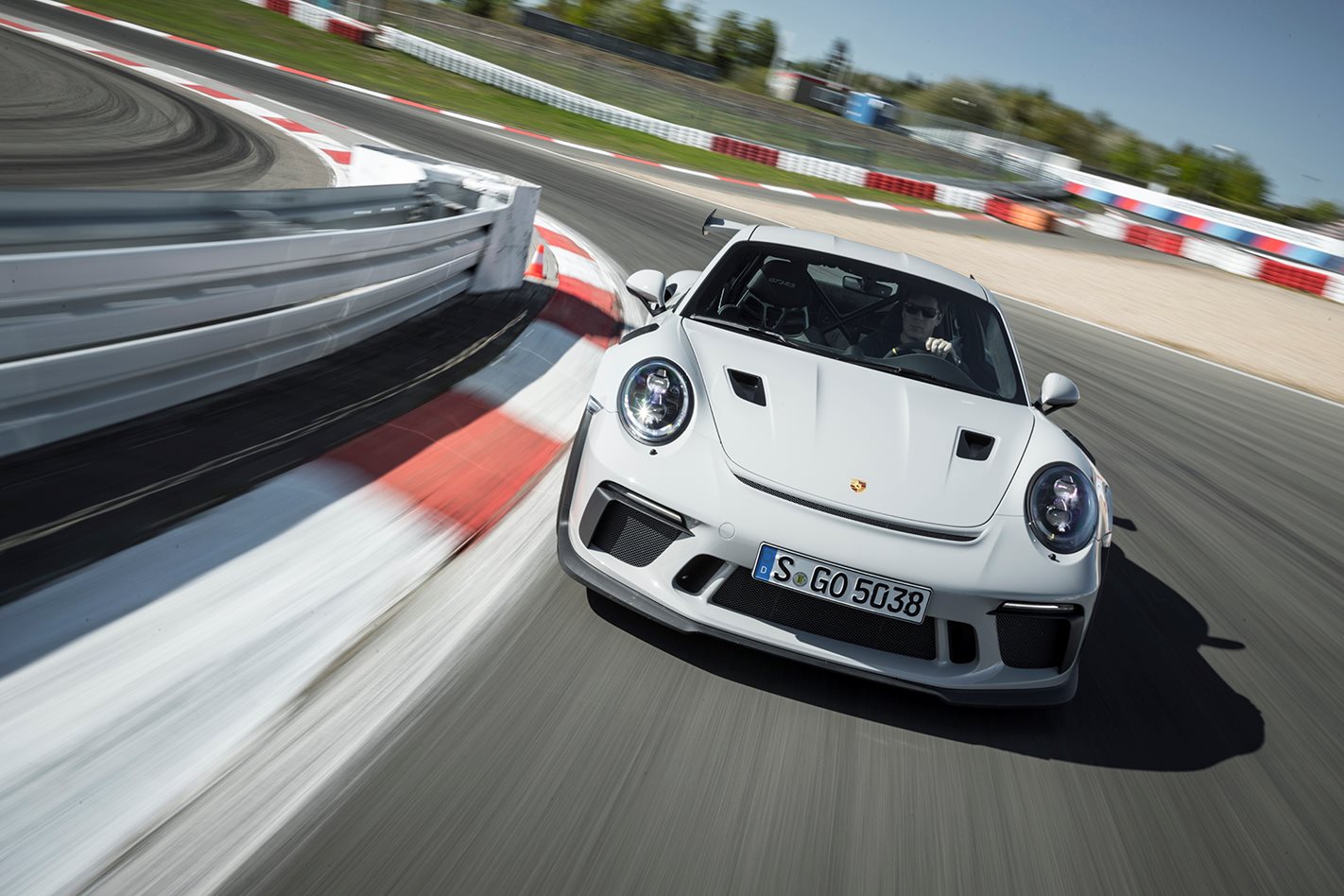 Before we go any further, a history lesson. Skip the next trio of paragraphs if you're up to speed on Porsche 911 GT3 RS evolution. The 2003 996-series GT3 RS was a car built effectively to homologate parts for the 911 GT3 RSR race car. An after-hours project initiated by GT product line director Andreas Preuninger, the car aped the classic 1973 Carrera RS in styling and went on to outsell even Porsche's most optimistic predictions.

READ NEXT: Everything we know about the next-gen 992 Porsche 911 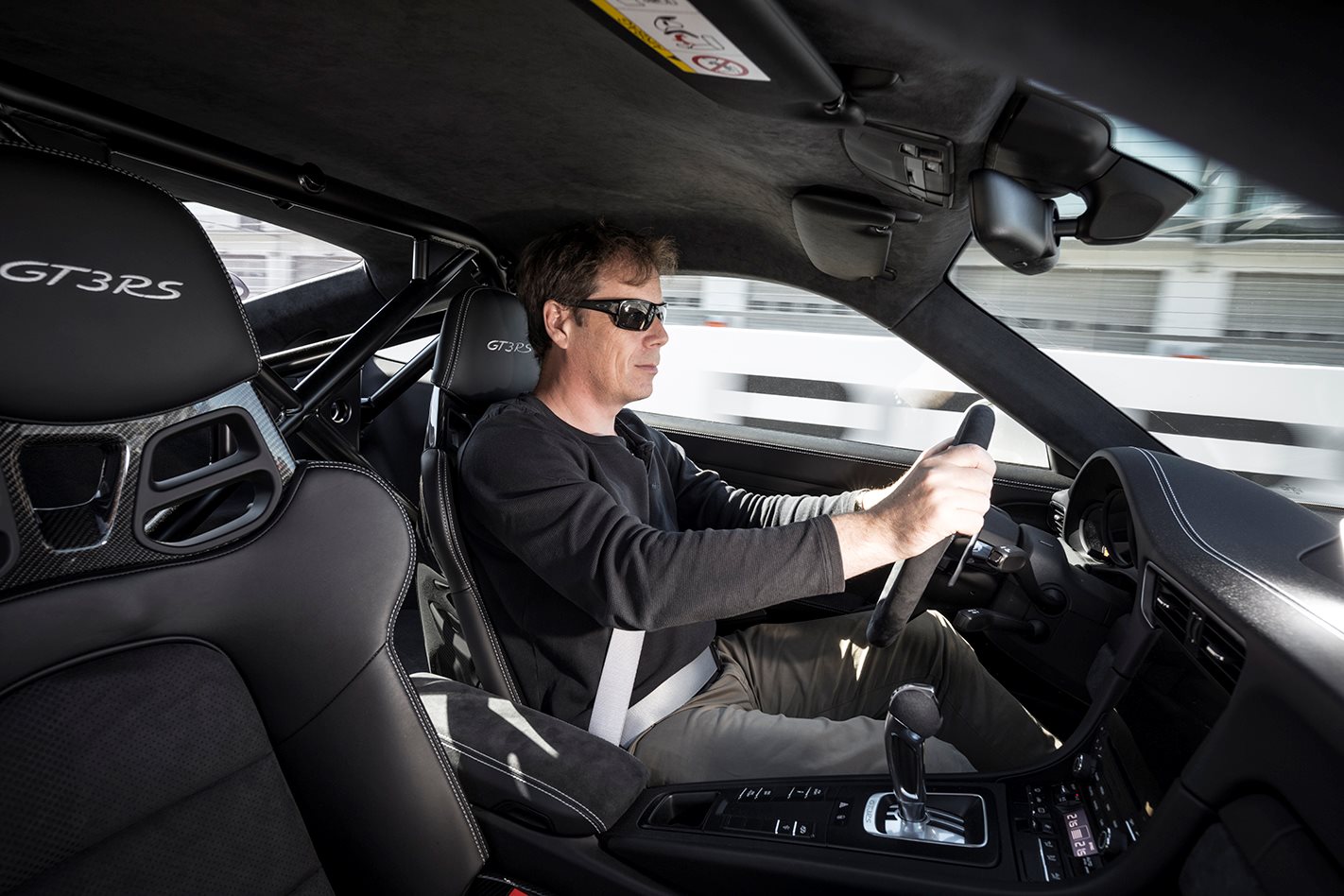 Then came the 991-generation car. Bigger and heavier than before, some suspected that in its dotage, the 911 might have gone a bit soft. The early Carrera models, introduced in 2013, at first appeared to speak of a beautiful GT coupe that had morphed into a role pre-ordained by the old 928, seemingly content for the Cayman to take up the mantle of Porsche's designated sportster. Then in 2015 we got the 991.1 GT3 RS. It seems our fears were unfounded. It instantly made the 997 feel a little quaint, delivering a big step up in grip and composure and featured the wide-arched body of the 911 Turbo. 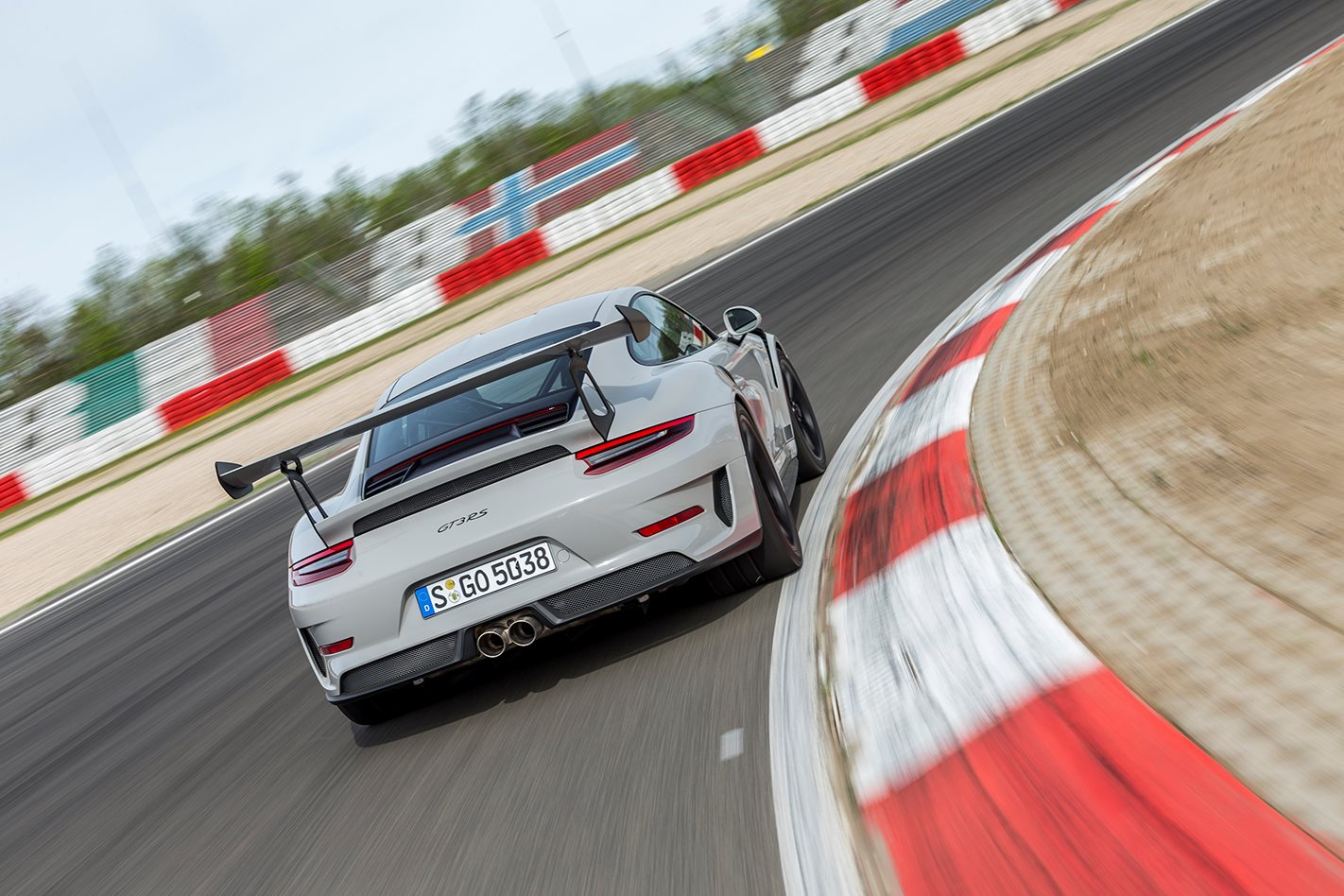 Now we have the 991.2 GT3 RS. At first glance it looks fairly similar to its predecessor. Play spot the difference and the most obvious changes are a different front air dam and the addition of a pair of air ducts in the bonnet. It doesn't even make a great deal more power, just another 15kW compared to the 2015 car.

None of which explains the fact that in the 12 years between the introduction of the 996 GT3 RS and the 991 version, the Nurburgring lap times improved by 26 seconds. Yet this car carves a massive 24 second chunk off its predecessor's lap of the Green Hell, recording a faintly gobsmacking 6min 56.4sec mark.

Granted, you probably don't have the skills of Porsche factory driver Kevin Estre so therefore this might seem a bit academic. I know I don't have anything like that sort of pedalling talent, but knowing there's the capability beneath you is somehow reassuring. 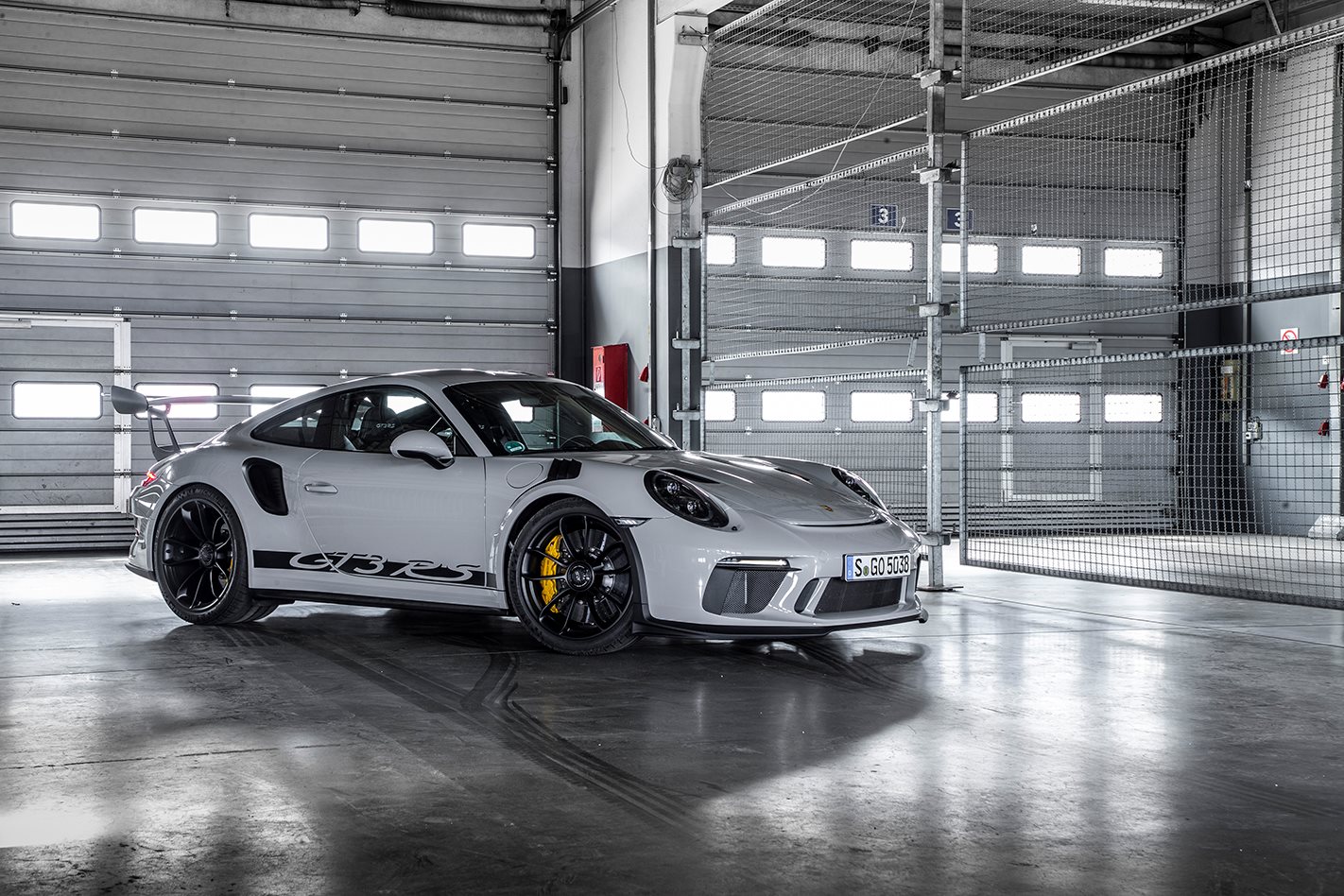 It feels rock solid on track, as you'd expect from a car whose engineering lineage to the GT3 Cup, GT3 R and 911 RSR race cars is anything but a marketing concoction. Do you notice that extra twenty horses? Not really. It's a mere four percent or so increase in power.

READ NEXT: Porsche 911 GT2 RS: everything you need to know

What you do notice is the immediacy of the car's front end, the way it translates steering effort into lateral grip at the front tyres. That old GT3 RS trait of easing the front end into a corner to feel out its purchase and then having accomplished that, set to work managing the rear grip post-apex is a thing of the past. This 991.2 feels all of a piece, with far sharper turn-in and superior ultimate grip allowing you to pick up the throttle earlier and harder. 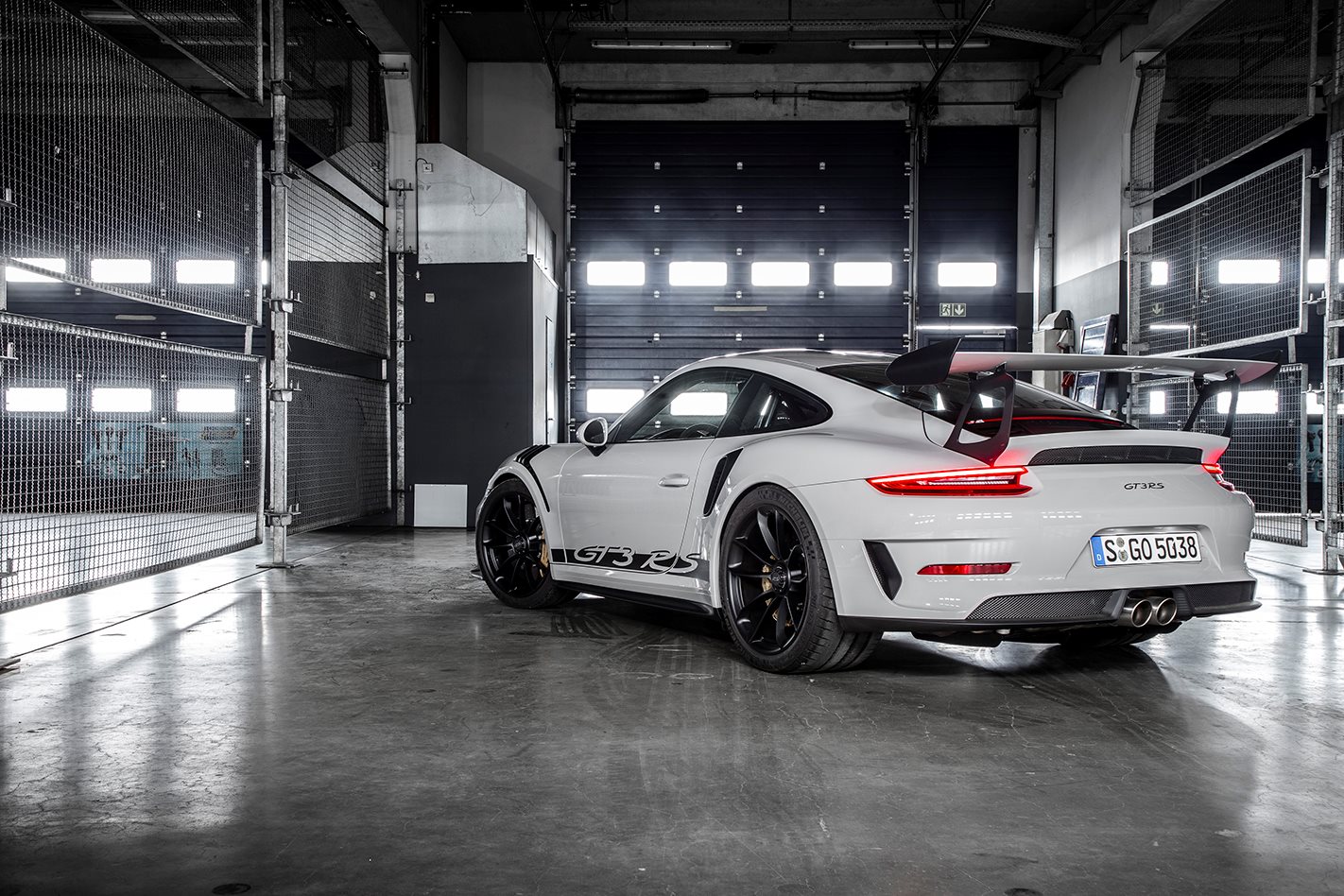 That immediacy hasn't come by accident. Porsche has been through the suspension of this car and has, as far as it can, gone on a search and destroy mission for rubber. The elastomer bushings of the old car have been replaced by twenty all-metal uniball bearings, reducing the variables the chassis engineers have to work with and ceding responsibility to the damping. 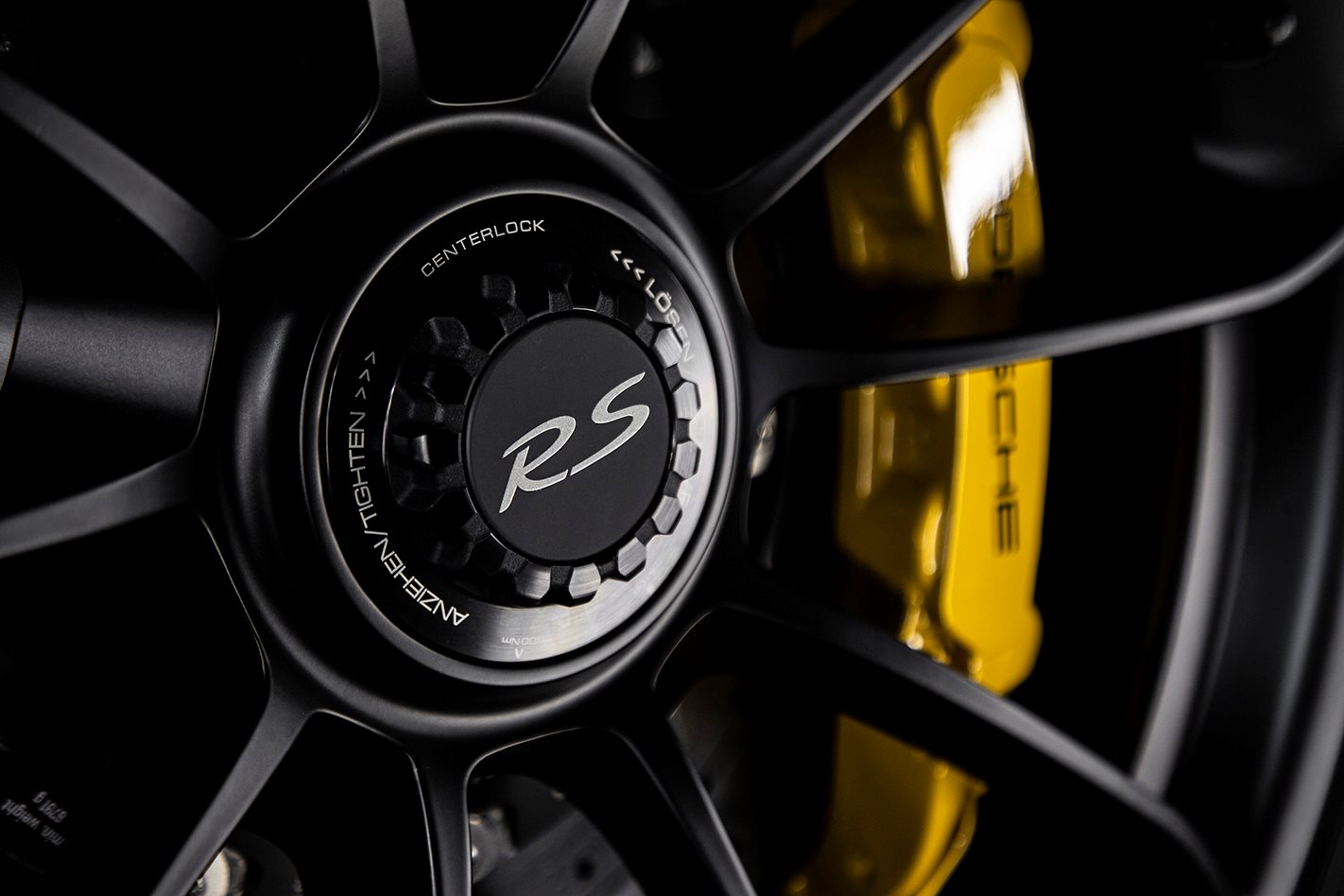 The aerodynamic package is responsible for a big chunk of that laptime improvement. The GT3 RS now delivers more downforce than any Porsche road car. Yes, that even includes the mighty GT2 RS. With no turbochargers and less cooling airflow required, the GT3 RS can instead put that airflow to work delivering real downforce, some 350kg of the stuff at top whack.

Crank the manually-adjustable rear wing to its most aggressive setting and the 991.2 delivers 40 percent more downforce than its predecessor. That's a massive step change in high-speed grip and a lot of work has also been devoted to making the car stable and aerodynamically effective during high-speed braking. 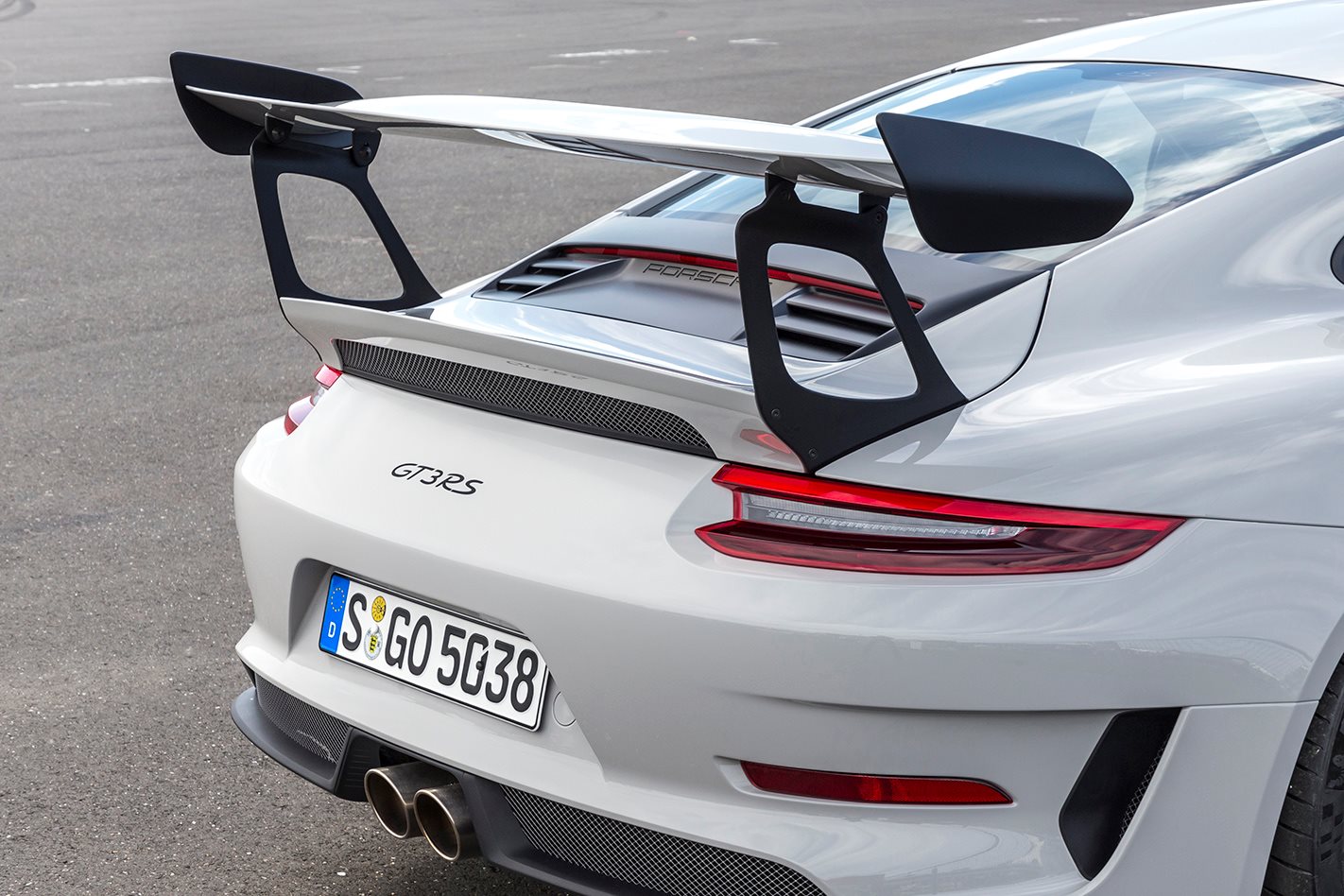 The front end of the 991.1 directed cooling air to its front brake discs, venting high pressure air back out of the arches through the gills atop the front guards. This latest car instead uses the front air intakes to funnel air to the front diffuser, which then hands it over across the flat floor to the rear diffuser.

Brake cooling is handled by those NACA ducts punched into the bonnet, which create tumbling air vortices that draw fast-moving air into the scoops, overcoming a problem of early recessed scoop designs where they could only draw in relatively slow-moving boundary layer air. 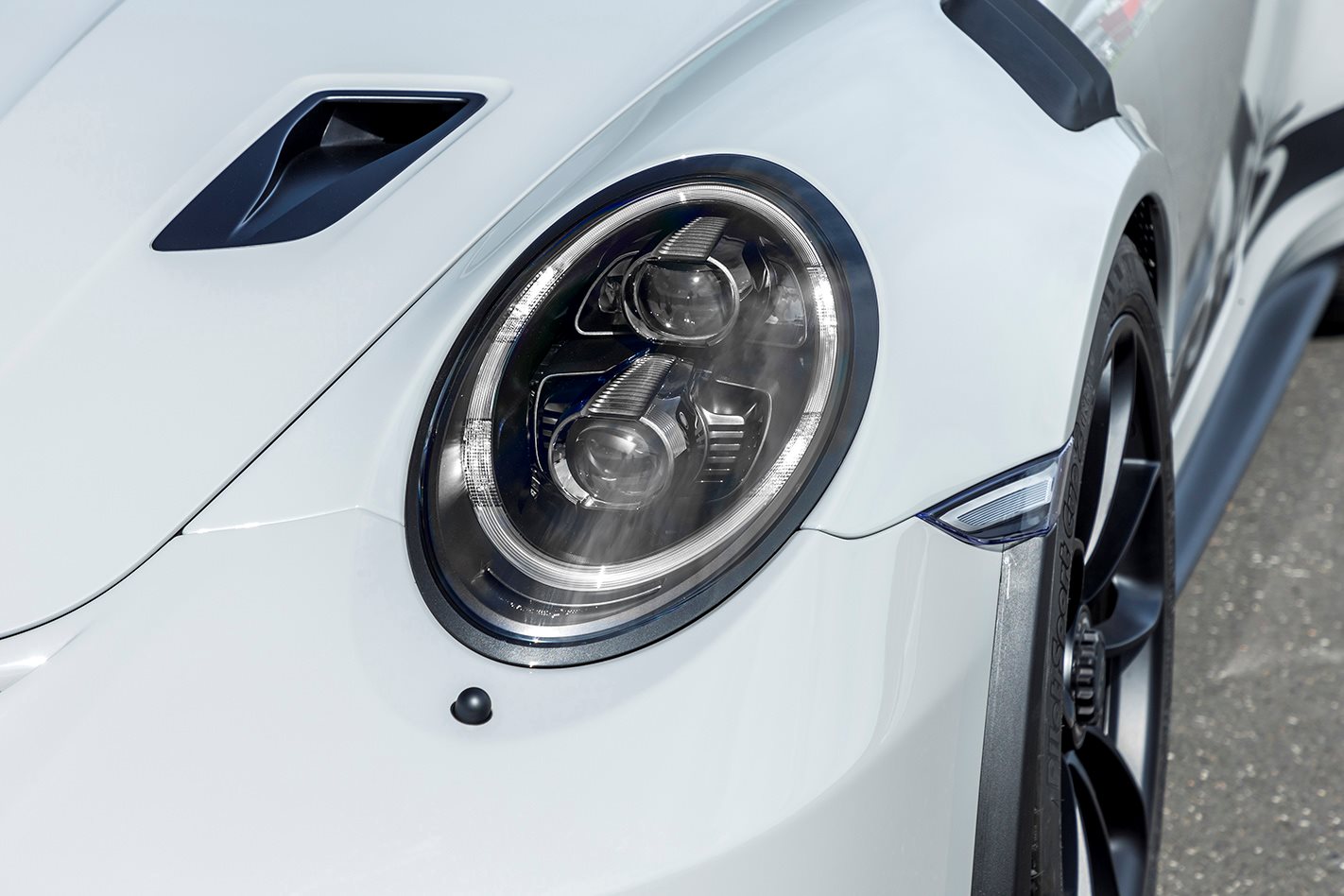 There are a pair of three-part turning vanes ahead of the front tyres that reduce drag and send turbulent air down the underside of the car outboard of the diffusers. The wider front wings and sculpted front wheels direct air onto the broader sill extensions, which generate maximum downforce immediately ahead of the rear arches.

The integrated rear spoiler does most of the aerodynamic donkey work at the back, kicking inefficient vortices way behind the car, while the rear wing can be adjusted through four steps of -1, +1, +3 and +5. The underbody diffusers help reduce body pitch at speed, improving stability under braking.

As you'd expect, all of the electronic systems that control the four-wheel steering, the stability control, transmission logic and the torque vectoring have been recalibrated and optimised to accommodate the additional effects of the improved aero package. 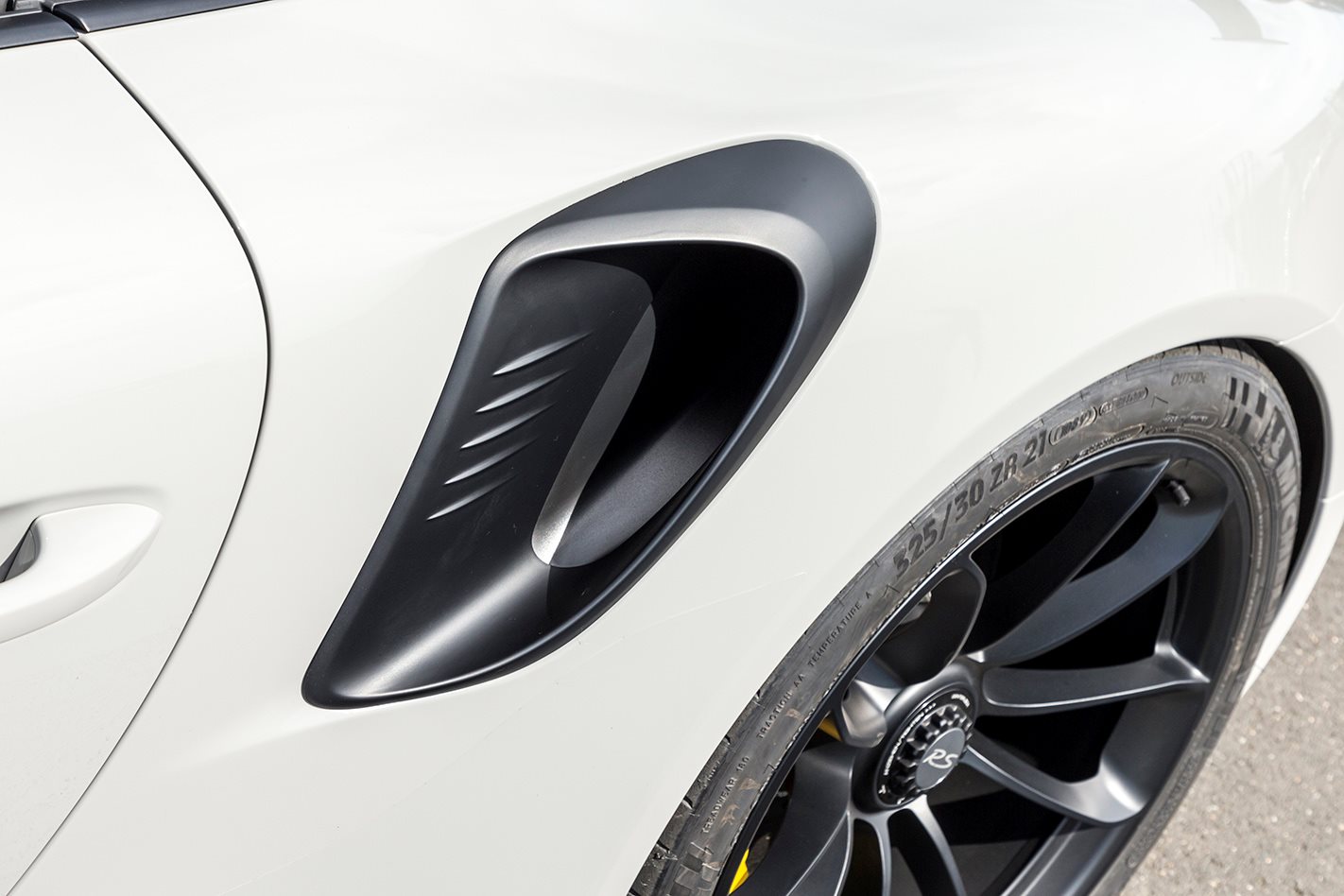 Porsche quotes a kerb weight of 1430kg for the car which makes the car appear to have become a trifle porkier than its predecessor, but Preuninger has responded to that accusation by saying that “if you compare apples to apples the new car is about 10kg lighter, but we can’t show that on paper because the certification process has changed. You used to be able to take the lightest spec the customer can choose and quote that as the car’s weight, which is fair, but now we have to have some more equipment in the car.”

In case you really wanted to pare weight out of the car, the optional $34,390 Weissach pack saves 16.5kg and swaps the magnesium roof panel for a carbon fibre reinforced plastic (CFRP) item, while the bonnet is also CFRP, as are the front and rear anti-roll bars and coupling rods. Rear wing and mirror shells and six-point racing harnesses are also included, but the forged magnesium alloy wheels (which save another 11.5kg) are an extra expense and are only available from February 2019.

Throw another $7600 Porsche's way and they'll take further weight out of it by swapping out the no-cost option steel roll cage for a titanium item. Or you could tack $21,590 to the bill and get the car with Porsche Carbon Composite Brakes, which are 50 percent lighter than their steel equivalents.

In July, an even grippier Michelin Pilot Sport Cup R tyre will be made available as an option. As you might well have figured out by now, there probably won't be any Aussie GT3 RS cars leaving the Porsche dealers at the flat $416,500 price before on-roads. 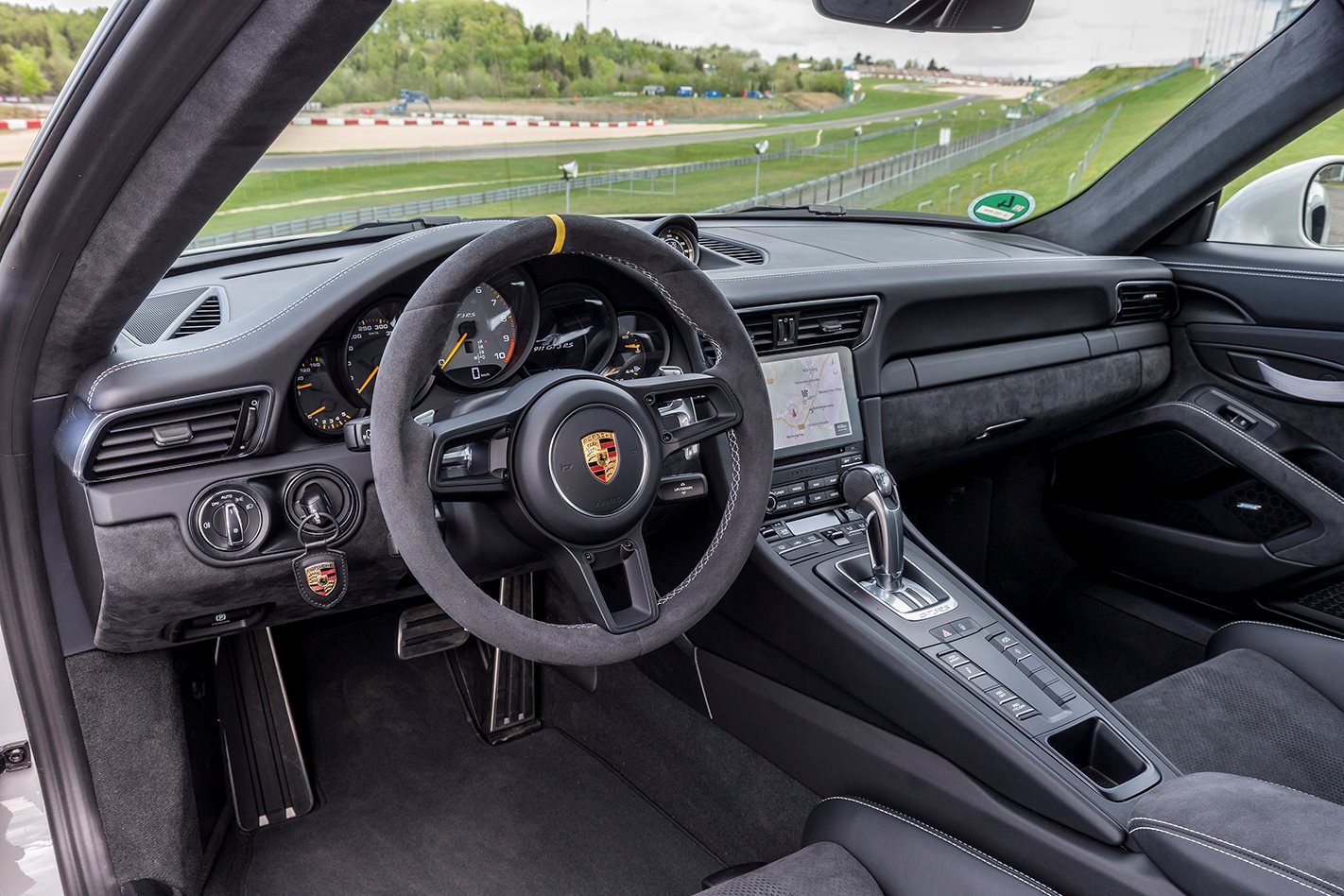 And they'll be a rare sight. Although Porsche Australia is at pains to stress that this is a low production volume model and not a limited edition, you'll need to be a very good Porsche customer and pretty quick on the draw to land one of the low double-digit build slots that have been earmarked for Down Under.

Production will continue for another 12 months before this generation car is superseded by a new model and the local importers are keen to land additional allocation, but it's by no means guaranteed.

Yes, it's an evolutionary model but, as we've seen, evolution sometimes takes rapid leaps forward. It's the product of incremental gains or, as Andreas Preuninger says, “11,000 parts made to feel like one.” If you're one of the lucky few to get a slot, you'll have landed possibly the finest sports car for sale at any price.