A HEART transplant from the Vitara gives the latest Suzuki Swift Sport a turbo under its bonnet, and a bona-fide performance boost.

At the same time, it’s gone on a sizable diet in an effort to get fighting fit, and the result is a hot hatch that’s not only a bargain buy at $25,490, but a damn fun whip to boot. 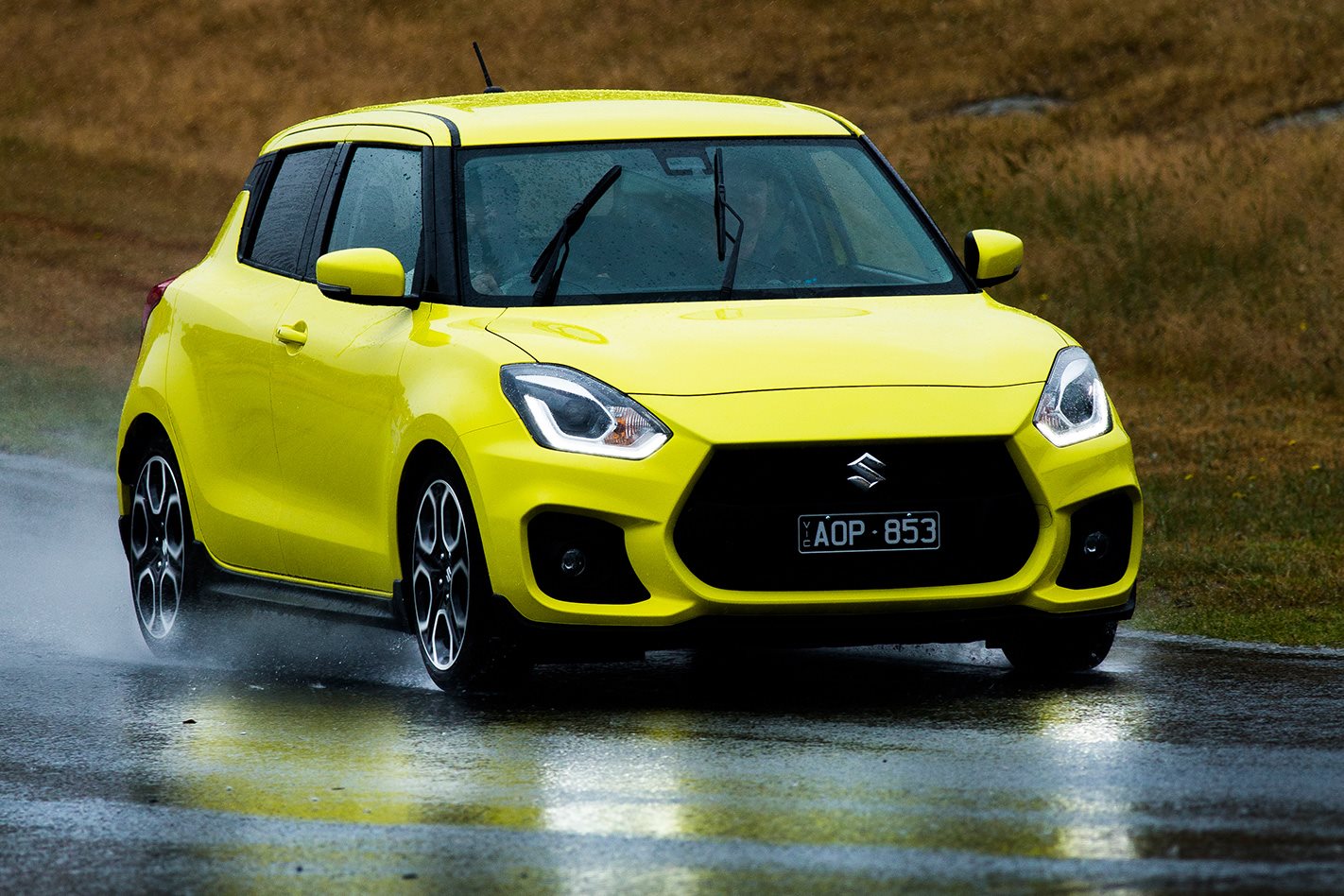 Because we love fast n’ frisky hatches, but also because our first experience with garden-variety Swift variants last year suggested that it could only be improved by the addition of more power. We’re also curious about whether the switch from atmo to turbo has robbed the Swift Sport of some of its charm.

Crisp handling has always been the Swift Sport’s calling card, but now it can at least keep up with the rest of the compact hot hatch players when it comes to traffic light showdowns. Thank heavens for turbos. On top of that, driveability has improved markedly while the specification level should leave owners wanting for very little. Miraculously, weight has gone down despite its external footprint increasing, and the core Swift Sport attribute of superb handling has remained well and truly intact. 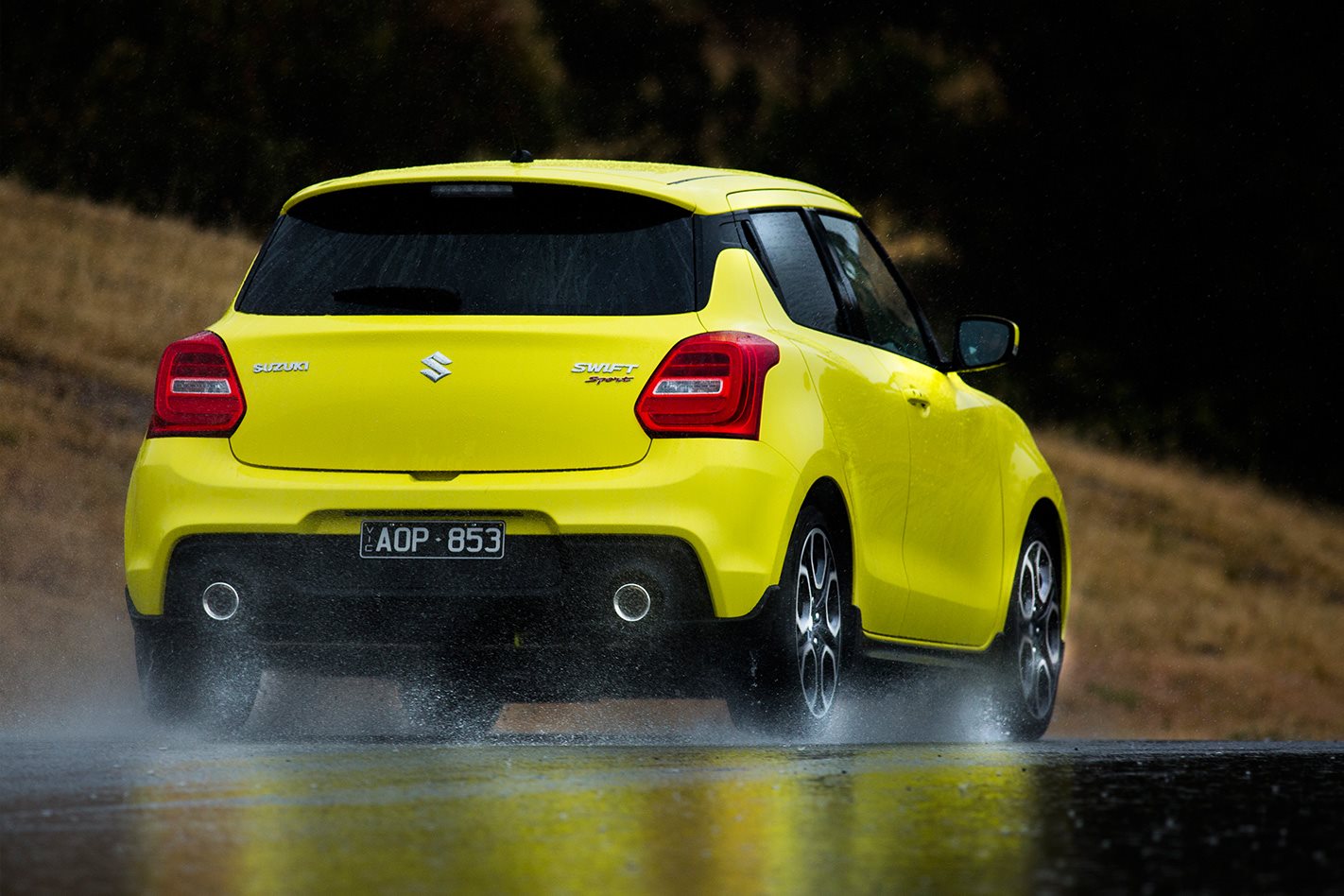 MINUS: Road noise; needs an LSD to be properly quick

CHOPPING 80 kegs off the kerb weight of a car is bound to improve performance. It’s simple physics. Adding 70Nm of torque has a similar effect, but do both at the same time and it’s a recipe for massive gains. Any gym rat will tell you that shedding mass and adding muscle is a good thing.

And that’s exactly what’s happened to the Suzuki Swift Sport: it’s turned into a fitness junkie. Now headlining the fifth-generation Swift range that arrived last year, the Swift Sport has undergone a significant shift by moving away from naturally aspirated engines and toward turbocharging, borrowing the 1.4-litre force-fed four-pot of the Vitara Turbo to replace the 1.6 atmo of its predecessor, a move that yields the aforementioned 70Nm torque growth.

The Swift Sport’s 1.4, tuned for a fatter midrange, makes 103kW and 230Nm – small numbers in the hot hatch realm, but enough to deliver a respectable 7.2 second 0-100km/h time that’s within cooee of the Polo GTI’s 6.7-second sprint time. 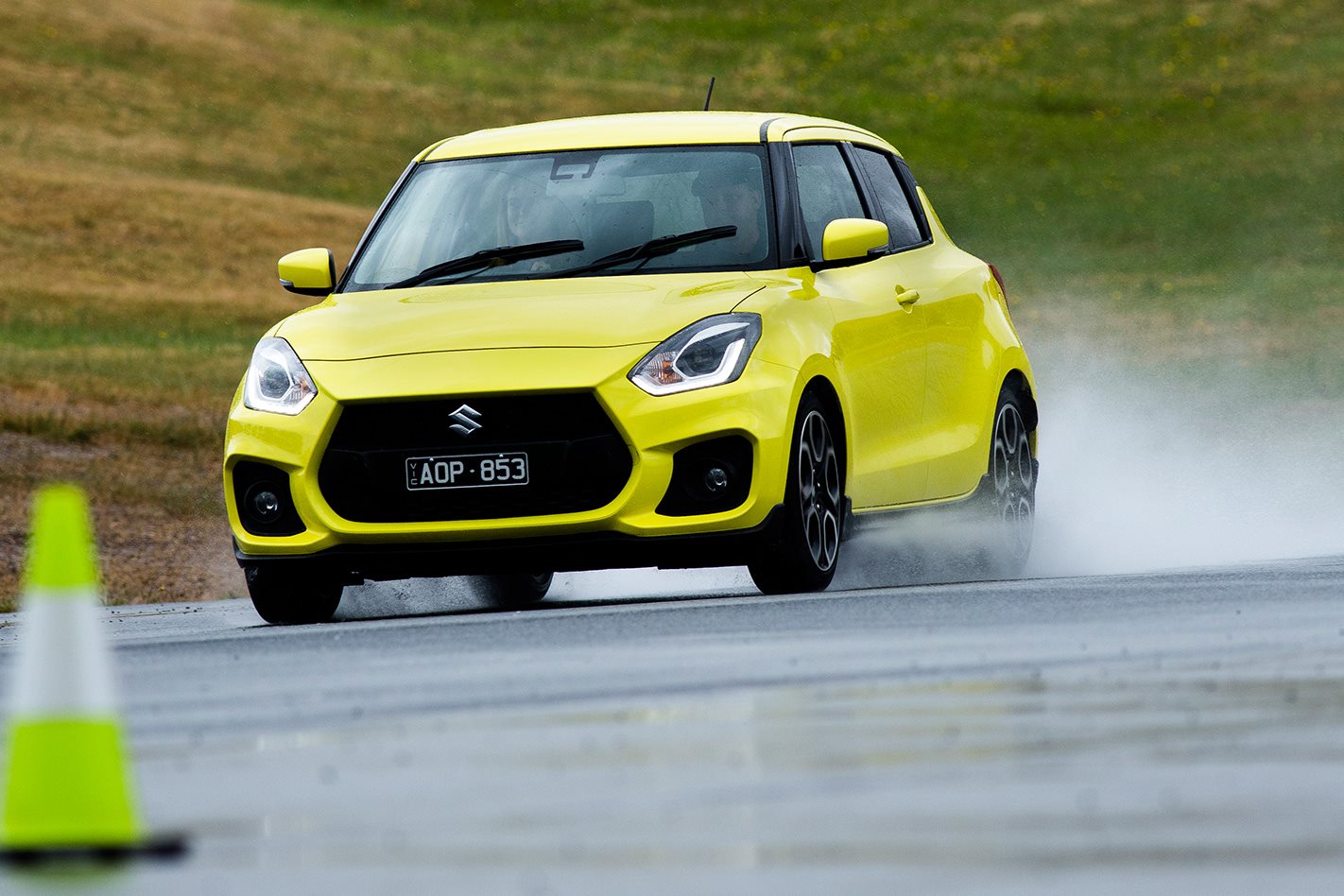 But the other side of the power-to-weight coin is the more important one. With a kerb weight of 970kg giving the new Sport an 80kg advantage over its predecessor, it also weighs 200kg less than its Volkswagen rival, and make it more than 330kg lighter than a Veloster Turbo. That translates to a lithe chassis that’s as nimble as a gymnast. Driven on track, the Swift Sport displays keen turn-in via its initially light steering, which then gives way to a progressive and natural-feeling build-up in weighting that does a good job of transmitting how much grip remains at the front.

The understeer threshold is impressively high, and with all driver aids turned off the Swift Sport will play the lift-off oversteer game if you provoke it hard enough. Pitch it into a corner with some trail-braking and it rotates neatly, but is never spiky – its limits are always approachable.

Body roll is minimised by fatter roll bars, but the Sport nevertheless exhibits modest amounts of movement in the pitch and roll axis. That roll gets in the way of the task of driving fast by unloading the inside front wheel and inducing performance-sapping wheelspin – a mechanical limited-slip differential would work wonders here. 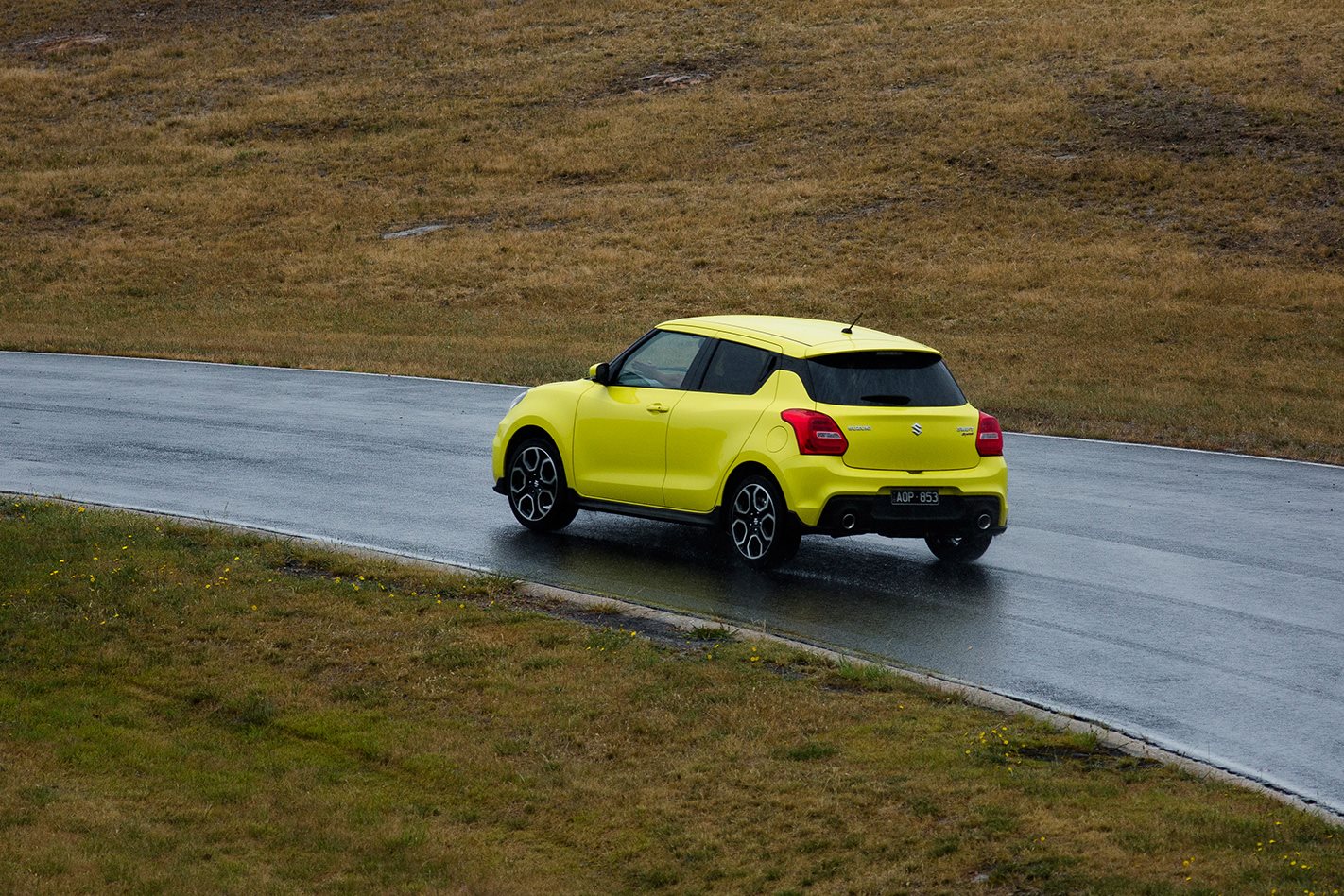 The suspension is firm on the street, but has just enough compliance to keep it livable. The Polo GTI, with its adjustable dampers, has an advantage here but the Suzuki won’t exactly shake your fillings loose. A greater concern is excessive road noise at highway speeds on coarse chip – something we haven’t noticed in other Swift variants. We’ll blame the Continental ContiSportContacts for that.

Torque steer is minimal, and rowing through the six-speed manual gate is a delight aided by the shorter throw of the 2018 model. Changing gears is one thing you’ll be doing less of though, thanks to the turbo engine’s generous mid-range torque. On the circuit it was hard to fight the temptation to constantly chase redline – a necessity in the old car – and instead drive a gear higher and exploit the midrange urge that’s available from 3000rpm and up.

That extra twist also delivers benefits on the street, with urban schlepping now a much more relaxing activity. Flex the accelerator from just off idle and the Swift no longer struggles – it just goes. More good news for daily drivers is a reduction in average fuel use to just 6.1L/100km for both manual and auto, the latter of which is now a far more agreeable six-speed auto rather than the fun-sapping CVT of the old Sport. 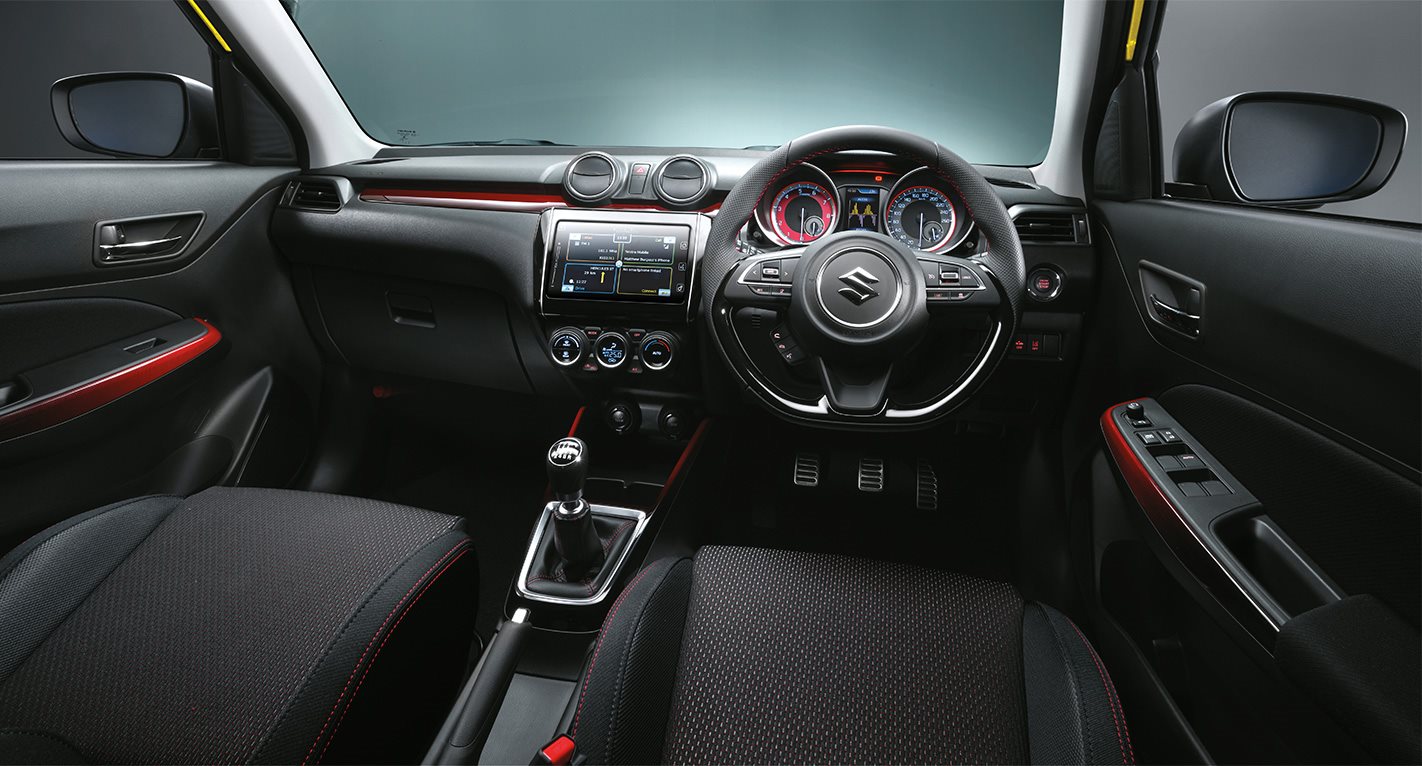 On top of that is the huge array of in-car tech that’s been lavished on the Swift Sport. High-beam assist, active cruise control, AEB, lane departure warning, climate control, keyless entry and ignition, smartphone mirroring and a highly functional infotainment touchscreen are all standard on the Swift Sport. And then there’s the tall-bolstered front seats, which have just the right amount of torso grab without going full Weinstein.

The Swift Sport’s move to turbo power has definitely set it on the right path. Only lunatics will miss the frenzied revving that was needed to drive the outgoing model. Is it enough of a boost, pardon the pun, to give the Swift Sport a leg-up against its core rival, the $27,690 VW Polo GTI?

Badge chasers and the power-hungry will probably still gravitate toward the vee-dub, but those looking in the direction of Suzuki will find a hot hatch that epitomises the cheap n’ cheerful mantra. 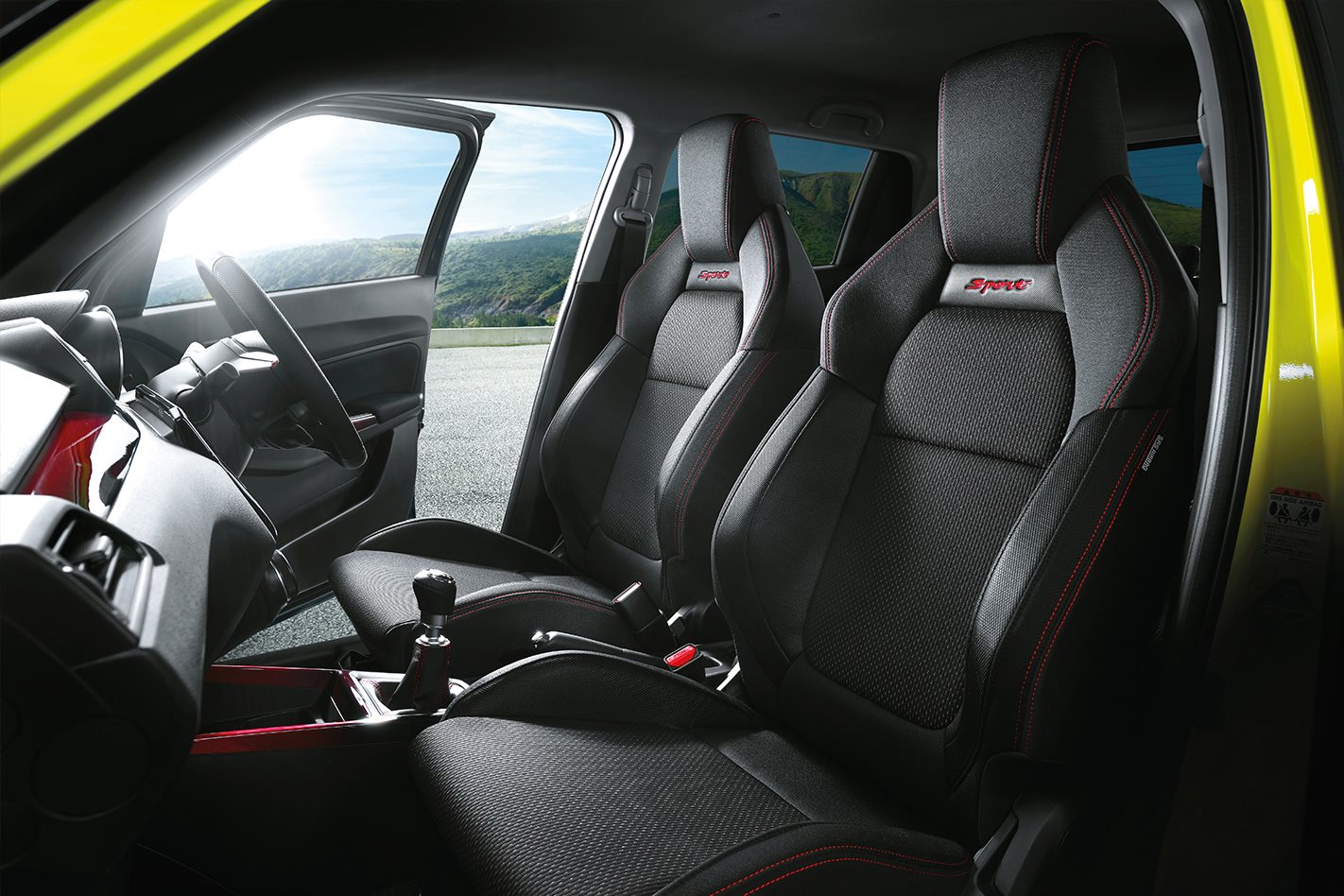 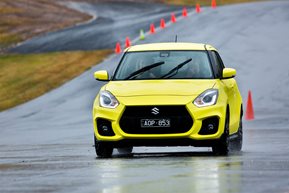