Suzuki’s timing is somewhat insensitive. At a time when many are suffering the waistband-stretching after effects of another festive season of gluttonous over-consumption, the all-new Swift Sport lands boldly boasting of an 80kg diet.

Weighing in at just 970kg in manual guise, putting aside British featherweights from Lotus and Caterham, Suzuki’s baby hottie is the lightest performance model on-sale in Australia.

Mazda was rightly lauded for its ND MX-5 scraping in around the one-tonne mark (1009kg in its lightest form), but for Suzuki to deliver a five-door turbocharged hatchback with a five-star safety rating carrying such a paucity of pounds is deeply impressive. The majority of the saving comes from the bodyshell, the latest Swift Sport using Suzuki’s ‘HEARTECT’ platform – presumably a natty marketing acronym which isn’t expanded on – but kilos have been shaved from virtually every area.

Light weight is the holy grail of car engineering; according to the likes of Gordon Murray and Adrian Newey, anyway, both of whom I’m inclined to believe. The Swift Sport’s lack of mass certainly pays dividends in a number of crucial areas, but let’s cover off the negatives first. 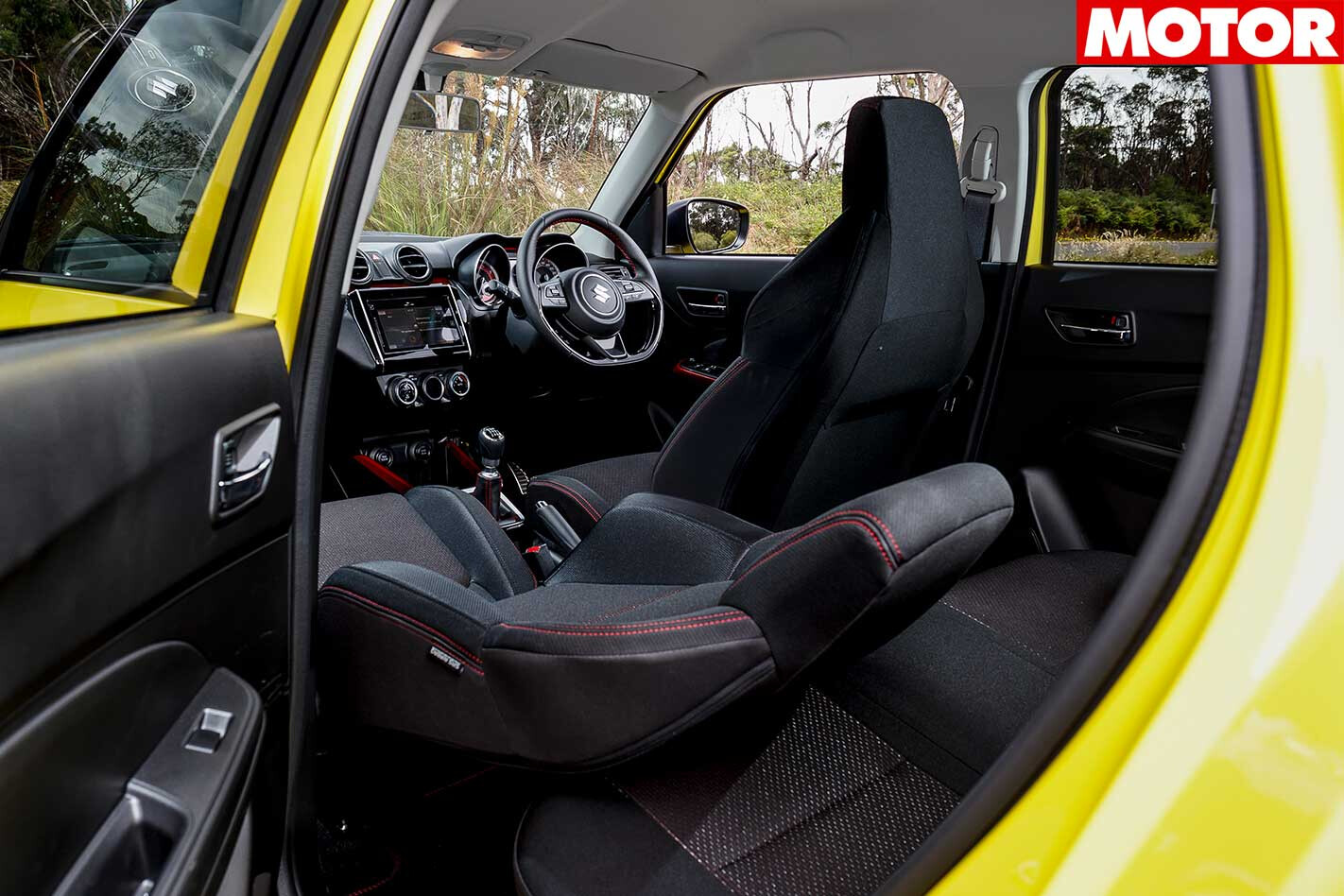 It’s clear that crucial kilograms weren’t wasted on sound deadening, as the little ’Zook makes a hell of a racket at highway speeds. Thankfully, the excellent stereo has sufficient grunt to drown out the road roar, while also taking your mind off the hard, scratchy plastics that make up most of the interior surfaces. It’s obvious the Sport is the range-topping variant of a budget city car.

Nevertheless, the essentials are right. The seating position is elevated but the relationship between the wheel, pedals and gearshift is a harmonious one, helped by tilt and telescopic adjustment for the steering column.

Great front seats, too. Despite its diminutive dimensions there’s ample space front and rear – adults in the back are no problem – and while the 265L boot isn’t enormous, you can always fold the back seats down for larger objects. 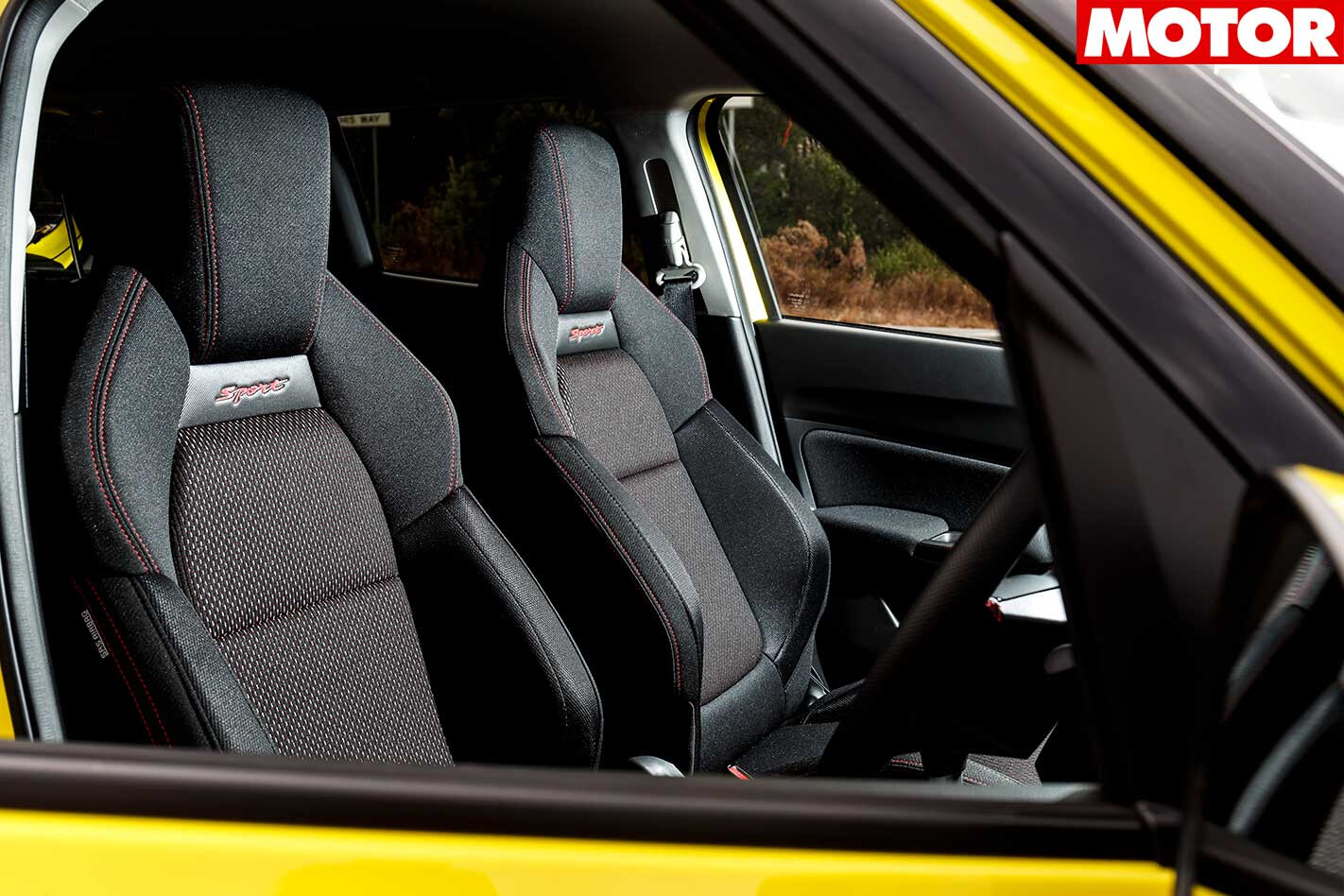 The Swift Sport is also packed with features that until recently were the preserve of cars costing 10 times its $25,490 (add $2000 for the automatic), including smartphone mirroring, adaptive cruise control with speed limiter, keyless entry and go, autonomous emergency braking, lane departure warning and LED headlights.

But enough of the boring consumer stuff, what’s the Swift Sport like to drive? Fast Swifts have a cult following in Australia – funnily enough, earlier generations were known as a Cultis in Japan – primarily due to rev-hungry engines (and a popular one-make race series) in the early-’90s and polished, entertaining dynamics in more recent iterations. It’s pleasing to report that this new car combines the best of both worlds. Even at this end of the market, performance cars are having to embrace downsizing and despite its diet the new Swift Sport has ditched its previous 1.6-litre atmo four for a 1.4-litre turbocharged unit. Power increases just 3kW (though the power-to-weight ratio swells from 95kW to 106kW/tonne) but torque balloons from 160 to 230Nm developed across a much wider range.

Suzuki doesn’t claim a 0-100km/h time (its 6.1L/100km fuel figure is deemed of greater value at this price point) and sadly we could not run straight-line numbers this occasion, but 7.5sec feels about right.

Of greater importance is how the engine feels and here the 1.4 ‘BoosterJet’ delivers in spades. Its teeny-tiny turbo spools up quickly to eradicate lag, yet a linear spread of power continues all the way to the 6000rpm cutout, which is oddly set 300rpm before the redline. In a perfect world we’d trade 20Nm of torque for 10kW extra power, simply to give the engine a bit more sparkle at the top end, but really the Swift Sport’s powerplant provides little to complain about.

The grunty engine delivers tremendous flexibility – full throttle in sixth gear at 50km/h results in instant response and useful acceleration – aided by super-short gearing. First is done at 50km/h, second runs out at 88km/h and third stretches to a mere 118km/h; opportunities for cog-swapping are frequent, so it’s just as well the six-speed ’box encourages snappy changes, while the pedals are placed nicely for heel-toe downshifting.

We wouldn’t buy the six-speed auto, but plenty will and they’ll still find plenty to enjoy. The ratio spread is a little wider but it doesn’t cost the car any pace and the ’box itself works very well, with quick shifts and great response to throttle inputs. Only a frustrating reluctance to accept seemingly reasonable downshift requests spoils the fun. And fun is what the Swift Sport delivers in spades. 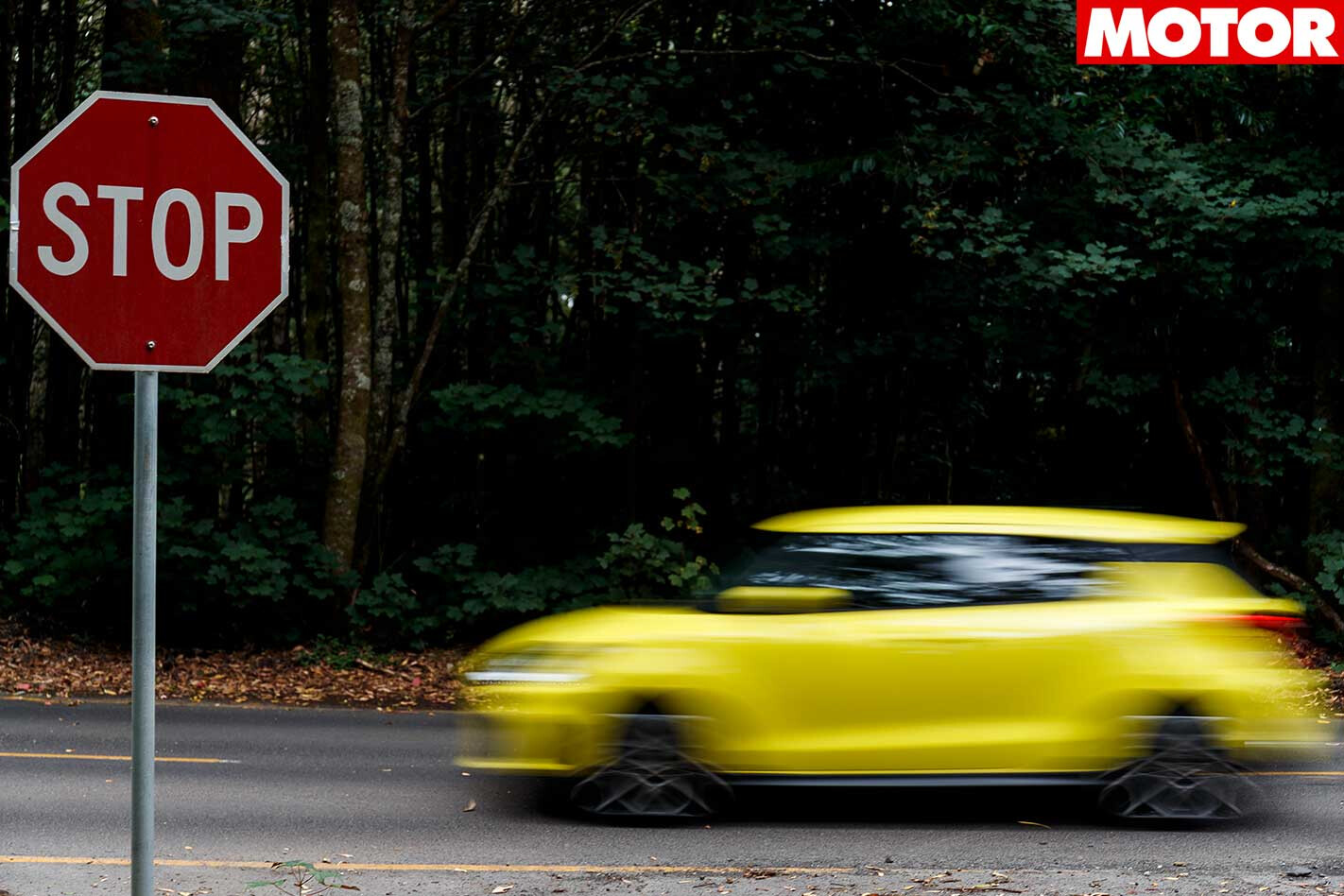 If, like us, you care more about what a car does than how fast it is, then you’ll find this little Suzuki very easy to enjoy. It shares not only a lightweight ethos with the MX-5 but a soft suspension setup that is happy to bounce over bumps and roll through corners and to hell with the lap times.

Outright grip levels aren’t high, but unlike a Toyota 86, which achieves this through rubbish tyres, the Swift Sport uses decent rubber – Continental ContiSportContact5 in this case – in a narrow 195/50 size.

They provide j-u-s-t enough traction to avoid inside wheelspin being an issue while gamely hanging on laterally before progressively releasing their purchase on the tarmac. The soft-ish setup results in plenty of pitch and roll – though nothing like the comedy levels of the MX-5 – allowing the driver to have a profound influence on the attitude of the car.

There’s a satisfying degree of adjustability in the chassis; trailing the brakes on corner entry or a well-timed throttle lift pivots the rear, not enough to require opposite lock, but enough to tighten the line.

The previous-gen Swift Sport had its similarly playful handling balance stifled by electronics, but the new car’s ESP allows plenty of latitude, only intervening when things get seriously out of shape. Even driven in a neat and tidy fashion the Swift entertains, bouncing along a bumpy road like a hot hatch of yesteryear; there doesn’t feel to be a whole lot of nuance or sophistication to the Monroe dampers but Suzuki’s team has done an excellent job with the tune, offering enough body control to avoid feeling unruly.

The other fortunate side effect of the Swift Sport’s setup is a ride quality rarely found in the warm-to-hot hatch segment – certainly the likes of the Ford Fiesta ST and Renault Sport Clio RS feel jittery and uncompromising by comparison. 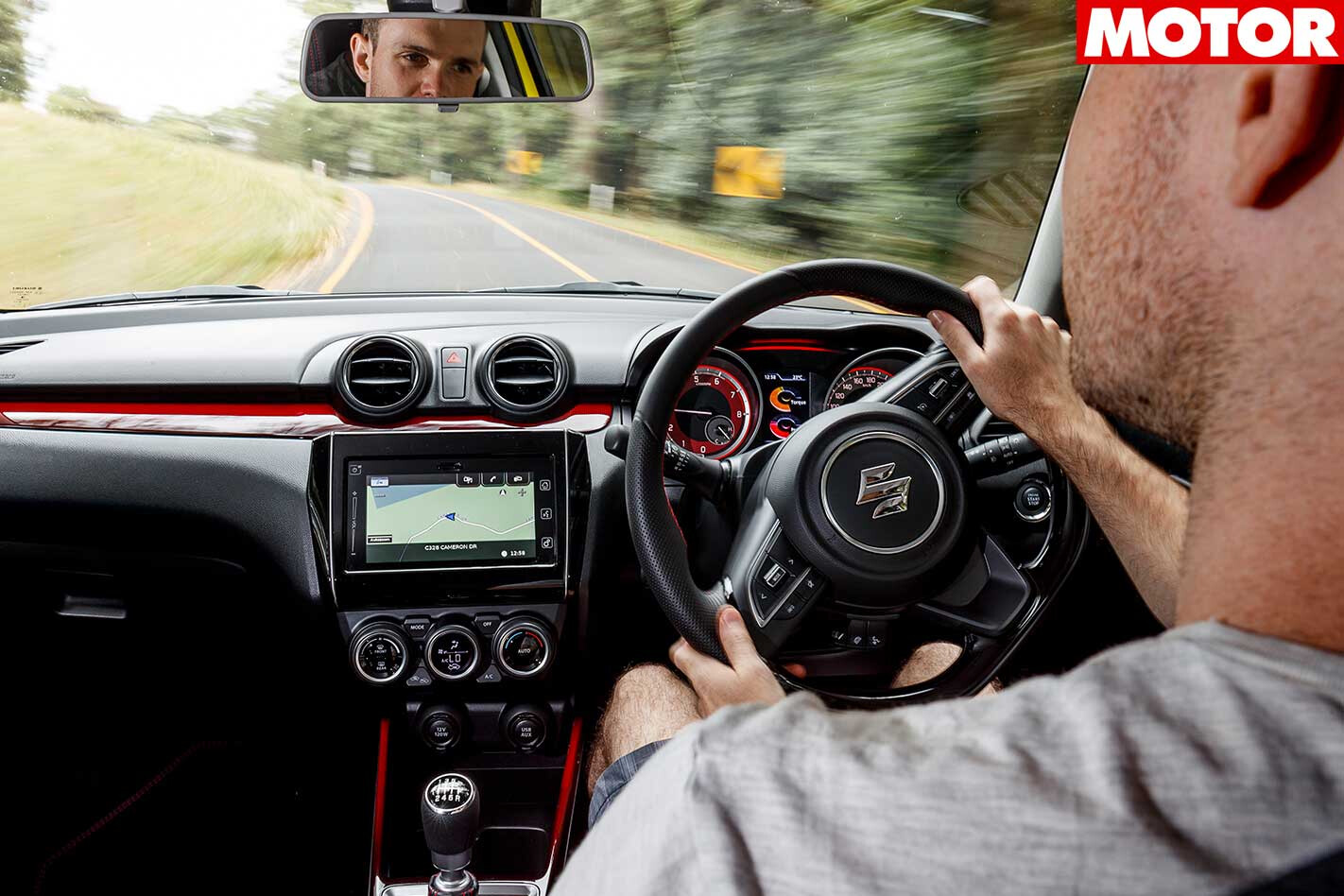 Suzuki’s timing might be insensitive (just kidding, Suzuki) but it’s also inspired. The Swift Sport’s closest rival, the aforementioned Fiesta ST, has ceased production with only a handful left in dealers and the VW Polo GTI will soon be following suit as a new model is due later this year.

Regardless, Suzuki should be congratulated for using clever engineering to revive the cheap and cheerful sub-tonne warm hatch. All that’s left is for the driver to do their bit – where’s that gym membership?