That sounds ****ing mental.” I’m surprised to see the lone Telstra worker sitting at the end of this long and twisting mountain road, but he’s not surprised to see me. The Roush RS3 has been announcing its approach for quite some time, belting out its bent-eight aria, but then this supercharged Ford Mustang has plenty to yell about.

The RS3 is the latest and greatest creation from iconic American tuner Roush Performance, put together and sold by Roush’s authorised Australian agent Mustang Motorsport in Melbourne’s eastern suburbs. The $59,660 kit effectively doubles the price of a standard Mustang GT, but the addition of an Eaton TVS R2650 supercharger lifts outputs to a healthy 560kW at 7000rpm and 908Nm at 4600rpm.

Keeping the resultant temperatures under control is an extra supercharger intercooler, extra radiator, larger primary radiator, transmission cooler and differential cooler. It all works. Not once during our test does the RS3 show any sign of heat-related stress. 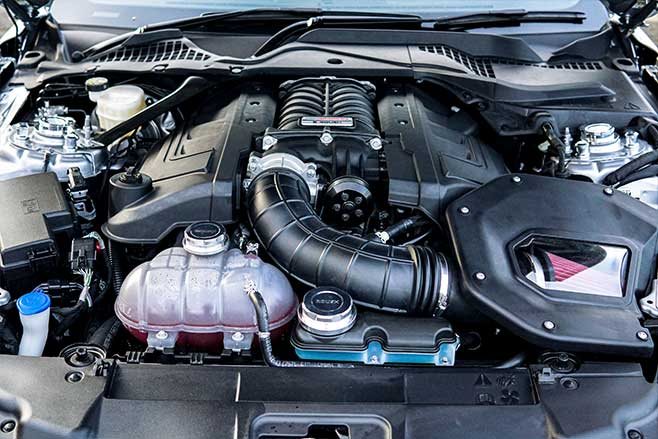 Roush recalibrates the MagneRide suspension (or provides the option of one- or three-way adjustable coilovers for passive suspension cars) and adds lowered springs, while wider wheels and tyres are added to the front, the RS3 now wearing 20 x 9.5-inch rims and 275/35 Continental ContiSportContact 5Ps at both ends.

READ: 2020 Ford Mustang R-Spec review
Engine aside, these changes alone alter the character of the Mustang, whether for better or worse will depend on your preferences. Whether as a result of the wider wheels and tyres or simply the altered geometry, the steering is a fraction heavier and less ‘crisp’ in its communication, though it controls a front end that’s now much keener to stick to the road. Swings and roundabouts. Roush’s MagneRide remap is firmer than both the standard car and Ford Performance’s effort, the resultant ride being sportier if you’re feeling charitable or more uncomfortable if you aren’t. 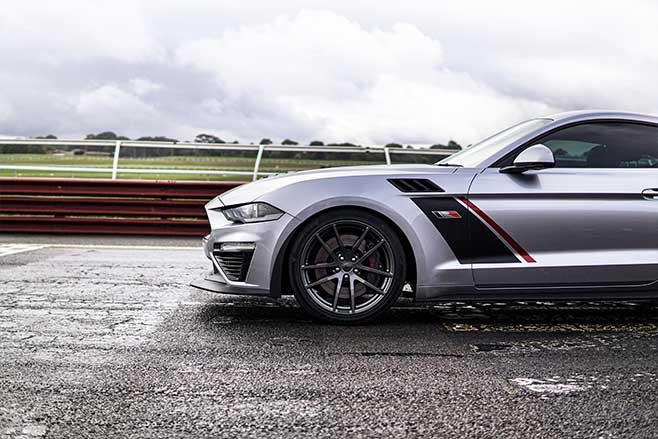 A prod of the starter button instigates a mighty roar, the optional X-pipe upgrade well worth the $660 for the extra volume. Despite the prodigious amount of ponies on tap, the RS3 isn’t a difficult or intimidating car to drive. Throttle tip-in is dull (presumably deliberately) but there are none of the hiccups and hesitations that afflicted Roush’s early MY18 tunes, the power delivered smoothly throughout the rev range.

The 10-speed auto fitted to our test car gets a bit confused, slurring some gears and gently jolting others and that’s when it can figure out which one it wants to begin with, but the standard Mustang can also struggle with decisiveness at times. It’s not really a hindrance, just something you’re aware of. 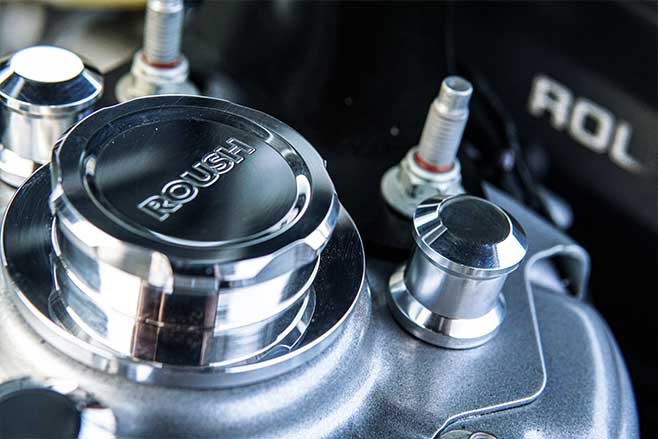 It doesn’t take long for patience to wear thin and the desire to feel the full force of the supercharged V8 take priority. Floor the throttle, wait for the auto to downshift to the appropriate gear then hang on as all hell breaks loose along with the rear tyres’ grip on the tarmac.

With traction control activated the electronics rush in but it’s slightly skin to bringing a bucket of water to a bushfire, a furious struggle between hardware and software ensuing. With the TC off the rear end squirms and the revs flare as the rear Contis are smeared across the road. And this isn’t from standstill, but an 80km/h roll-on in third gear. Or fourth. 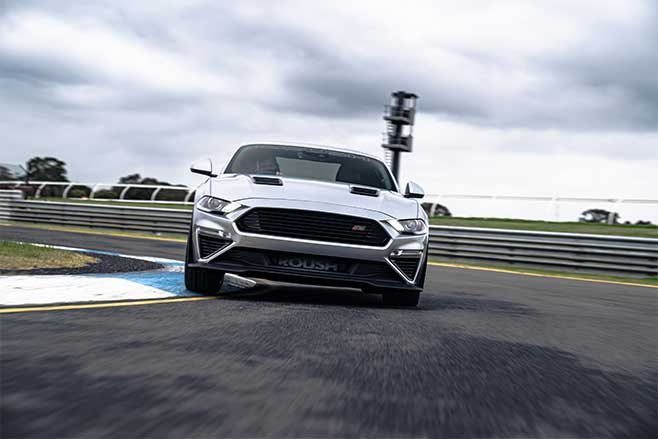 This car requires respect. Roush’s chassis mods have strengthened the front end and correspondingly loosened the rear; trailing the brakes will rotate the car and in steady-state cornering this Mustang now feels to distribute its weight evenly front and rear.

As such, applying power quickly alters this steady state into oversteer and it doesn’t really matter how fast the corner is, the option is always there. Exits of slower corners need a gently, gently approach and though the roads today are thankfully warm and dry, patches of runoff illustrate what an adventure the RS3 would be in the wet.

It’s raw and extremely exciting, held back only by, again, the gearbox. In this case the Mustang’s 10R80 is like the regular kid that’s parachuted into the genius class at school; in isolation they’re fine but all of a sudden everything’s happening a lot quicker and the thought process can struggle to keep up. 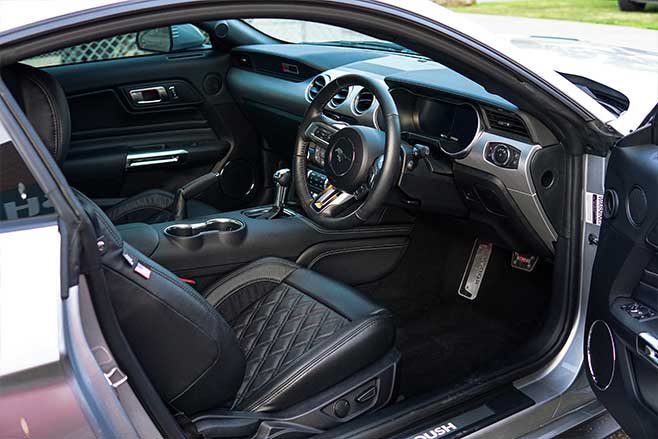 The lower gears are devoured so quickly that the transmission constantly feels a step behind, for instance when you lift off approaching a corner and want to hold the current gear but the ‘box selects the next ratio at the most inopportune time.

It’s easy enough to drive around; simply select fourth and let the monumental torque do the work, for when the RS3 finally unleashes all its horses it is savagely, rabidly fast. Sounds good, too, as our Telstra friend so eloquently expressed. 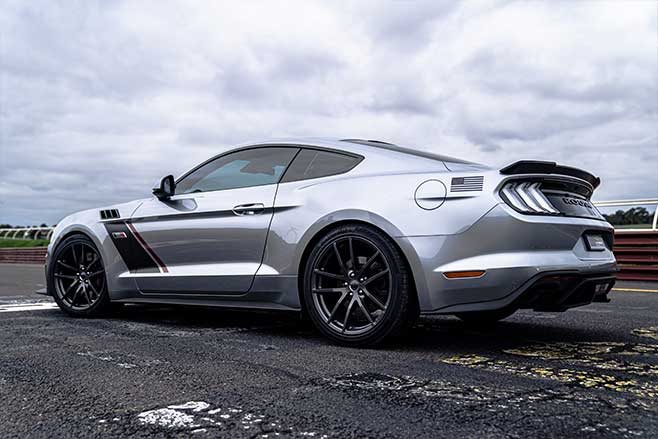 If I was to nitpick - and obviously I will - in attempting to better control the weight Roush has made that weight more apparent; the slightly delayed responses to inputs can no longer be attributed to body roll or setup, just physics. Likewise, the Conti 5Ps, while excellent day-to-day, feel a little outside their comfort zone for hard use in a car with this much power, Michelin Cup 2s or Pirelli Trofeo Rs would work a treat.

The idea of spending $130K on a Mustang will be absurd to some, but the Roush RS3 can back up its price tag. Not just with its outright performance, but small touches like the extremely comfortable retrimmed seats and illuminated Roush logo on the intercooler surprise and delight. 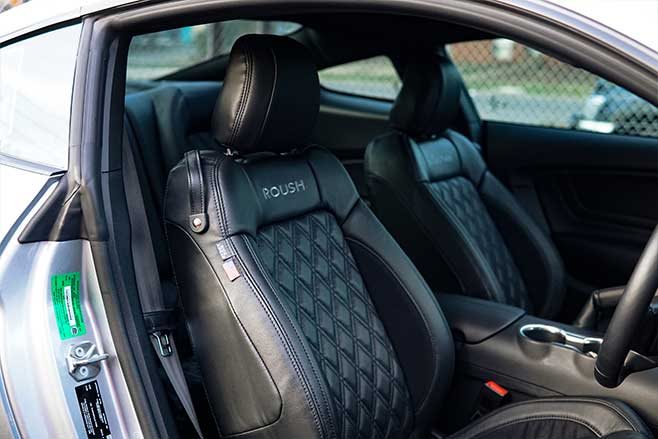 The RS3 reminds me, funnily enough, of the Chevrolet Camaro ZL1, a car with hot rod attitude but enough manners to work every day. Just remember, wherever you're going, everyone's going to know you're coming.