Traction controls are the definition of a hot-button issue for the enthusiast driver. Some would argue you should treat that switch in your car as if it will electrocute you on contact, others say you can’t really ‘feel’ a car without turning off the electronic nanny, and even racing drivers will admit you’re going to record faster hot laps if you leave traction on.

And then there are BMW M4 customers, who apparently desire a vehicle with no fewer than 10 traction control settings (it’s called M Traction, as in “Mmm, I really can’t decide”).

Personally, I can’t see why you would want more than three – On, Off or Look At Me/Heroic (sometimes called Dynamic Traction Control by BMW). Yet seven extra levels of traction control aren’t the only unnecessarily show-offy software additions to the new BMW M4 Competition; indeed, they’re not even the most absurd. 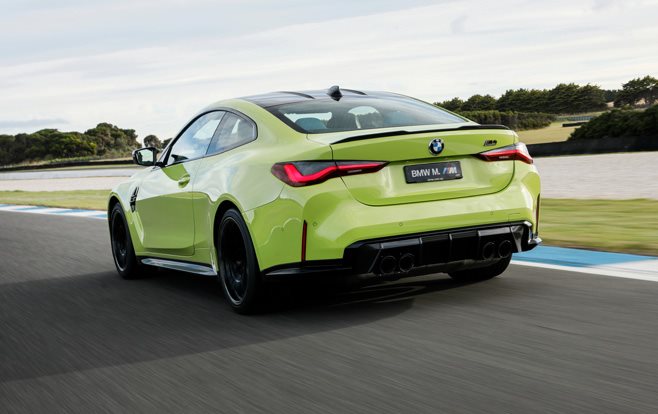 This admittedly sideways-oriented coupe – with 375kW and 650Nm from its TwinPower Turbo 3.0-litre six-cylinder engine all going to the rear wheels – has something called an M Drift Analyser, which seems to have been dreamed up by someone in the BMW PR team who thinks provoking shock and outrage on A Current Affair is a good way to garner publicity.

The first thing that M Drift Analyser does is to disable all 10 kinds of traction control. I’m sure that buried somewhere in the manual is a legal advisory about never actually using this feature, and particularly not in front of a TV tabloid journalist, but if you happen to have access to a giant, wet skidpad, as we did at the car’s launch, then it’s game on.

And gamification seems to be what the Drift Analyser is all about, which made me alarmed to think how young some M4 buyers must be now. 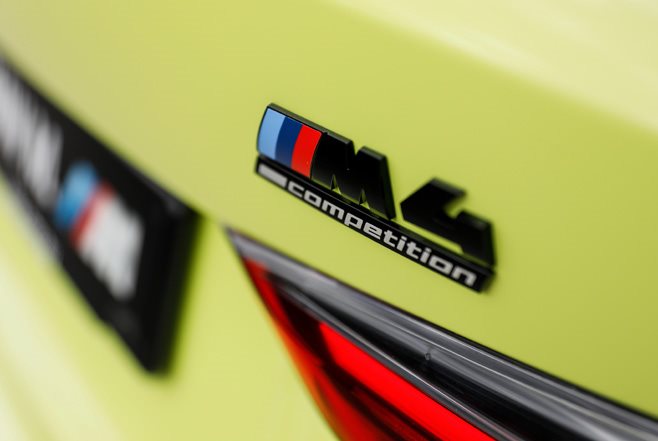 With the help of some highly skilled drifting coaches – men with cast-iron stomachs and titanium-strength patience for being spun around in circles by over-enthusiastic idiots – we were encouraged to find the M4’s perfect drift balance.

With so much power, instantaneous throttle response and quick-flick steering, it’s a wonderful car to drift once you get the hang of it. It’s also stupidly large amounts of fun.

Getting the M Drift Analyser to award you its maximum five-star rating is not so easy, though. It’s hard to say how the car’s algorithm decides the difference between a four- and a five-star drift, but happily it does also provide statistics on how far you have drifted, how long you held the drift for and what angle the car was cocked at at the time. No, I don’t know how I lived without that information for so long, either.

With that fun and frivolity over, we were finally unleashed on the Phillip Island race circuit in a collection of brightly coloured M4s and M3s, some of which were fitted with the optional $7500 M Carbon bucket seats. 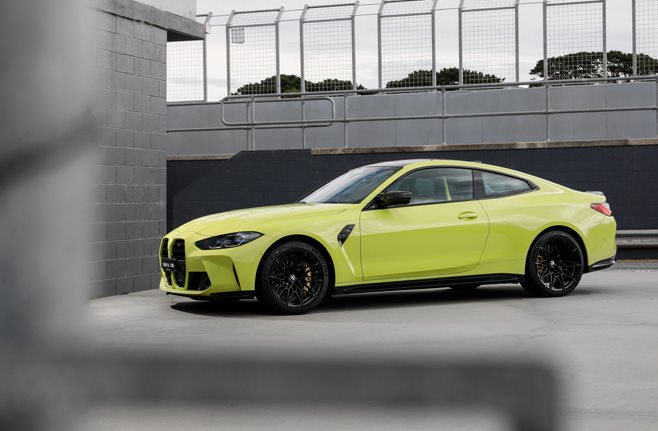 Much like the M Traction, these seats suggest the typical M4 buyer is very much intending to track their vehicle regularly. While they look fantastic – and include a removable headrest pad so that you can sit in them more comfortably with your racing helmet on – these seats are on the firm side of hard. The side bolsters are also so high that you may need to put your thighs into pilates classes to deal with getting in and out over them, and the little carbonfibre lump between your legs could be challenging to sperm production if you’re going to be braking hard.

Even without those buckets (and the standard M Sports Seats are excellent), you get plenty of carbonfibre goodness as standard in your M4 Competition (yours for $159,900, which is $5000 more than the four-door M3 Competition, because style is more expensive than practicality), which really does look and feel like a seriously focused machine inside.

The classy splashes of carbon on the properly chunky-feeling steering wheel are particularly lovely and behind that you will find the two most perfectly formed and fab-feeling shift paddles I’ve ever encountered. Ferrari paddles are too big and Lamborghini ones feel like they’re going to cut your fingers off, but these BMW ones are just right.

You could choose to go without them, of course, by opting for the non-Competition version of the M3 or M4, which is available with a manual gearbox, an option that BMW says sets it apart from its competitors (which tends to suggest it doesn’t see Porsche as competition). 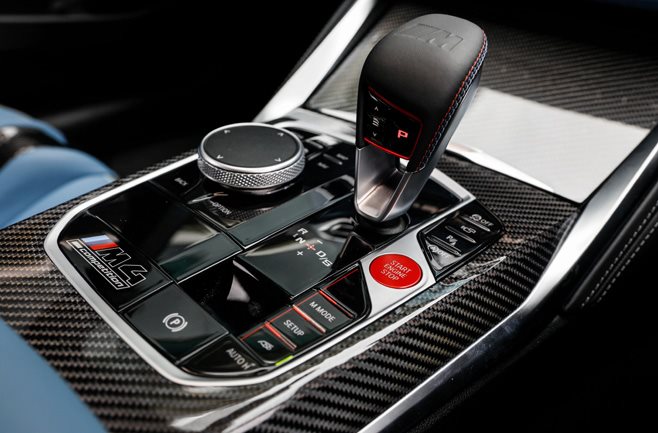 They didn’t have one for us to drive, which is a damn shame as I’m sure I would have loved it, even though you’re forced to put up with a detuned version of the engine making 353kW and 550Nm simply because the manual ’box can’t cope with more torque than that.

Around a track as epic and intimidating as Phillip Island, of course, it’s a boon to have one less thing to worry about, and with your various M systems set to maximum attack (using the pre-set bright red M1 and M2 buttons on the wheel), the shifts from the eight-speed M Steptronic Sport transmission are whip-crack wonderful (sadly, I can’t tell you anything about eighth gear, though, as even at 230km/h I didn’t need it).

With maximum torque arriving at 2650rpm – before max power arrives for a truly howling symphony of goodness at 6150rpm – you really don’t need to shift as often as you think you do, anyway. 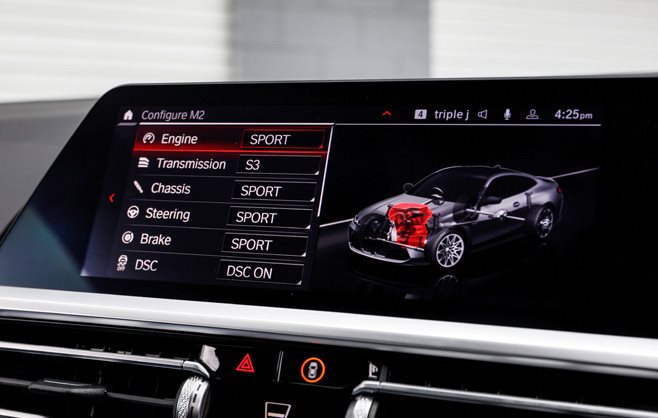 There’s so much rich torque on offer that you can take third-gear corners in fourth, while what would be second gear bends in other cars are easy third-gear fare for the M4.

This does give you the enticing option of dropping a gear lower at any time, planting the throttle and letting the tail dance out just enough for you to feel like Vin Diesel before one of the many levels of traction control puts you back on the right path.

My instructor, former Supercars ace Cameron McConville, pointed out that this was only making me slower and that holding a higher gear was the better option for fast laps, but I pointed out to him that I didn’t care.

This is the sixth generation of the legendary M3 (which used to come as a coupe and a sedan, before the arrival of the M4 back in 2013) and, while it is one of the first cars I ever fell deeply in love with, back in its E46 days, I haven’t loved them all. 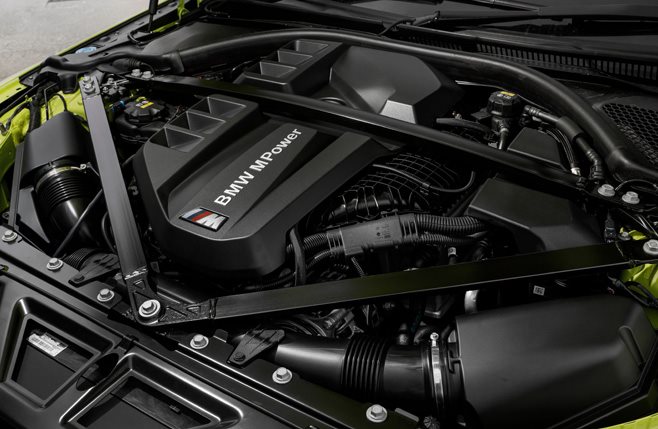 All you need to do is glance at this new version to realise that the car’s original ethos of being a bit of a sleeper – you had to know what lay beneath that M badge to realise just how special an M3 was back then – has been put to sleep forever.

The designers at BMW’s mad M division seem to have been pushing more and harder over the years for this vehicle (and the sexier M4 versions in particular) to look as tough, lairy and racy as they actually are.

With its muscular shape, bulbous bonnet and vents aplenty, it certainly doesn’t hide its light under a bushel any more, and the M4 in particular looks instantly desirable, at least from most angles. Somehow the giant kidney grille looks slightly better on the M version of the 4 Series than the standard one, perhaps because it’s frameless here.

While recent versions of the M4 I’ve driven seemed to have slightly misplaced the magic dust sprinkled on previous models – somehow feeling more digital rather than personal – today it feels like the magic is back. There is just an inherent rightness to the way this M4 handles, accelerates and communicates what it’s doing to you through that phat steering wheel. 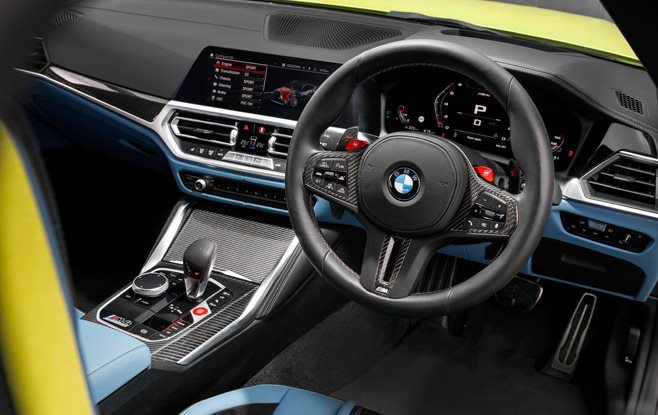 It feels seriously planted to the road, and tighter than a Scottish drum, with “an extensive package of interlinked bracing elements” increasing longitudinal and torsional stiffness.

The new car is a not insignificant 123mm longer and 26mm wider, giving it a better stance, and achieving that hard-to-define goal of perfect balance.

Unfortunately it has also piled on some pounds, with the kerb weight up 170kg to 1730kg. That is not a light track car, yet there was an M2 CS on hand for us to drive on the day as well, and while it felt more sprightly it just didn’t seem to be anywhere near as fast or exciting. Nor did it feel like it would ride particularly well on public roads; we didn’t get to try that, but the level of compliance of the M4, as we tooled down pit lane and I had time to notice, felt excellent.

I’ve also long been a fan of BMW’s steering feel, although I’d say for the past few years it has not been quite as good as it used to be, but this M4’s tiller is tactility at its best, and the M cars, at least, seem to be right back where they belong in the pantheon of steering greats; just below Porsche. 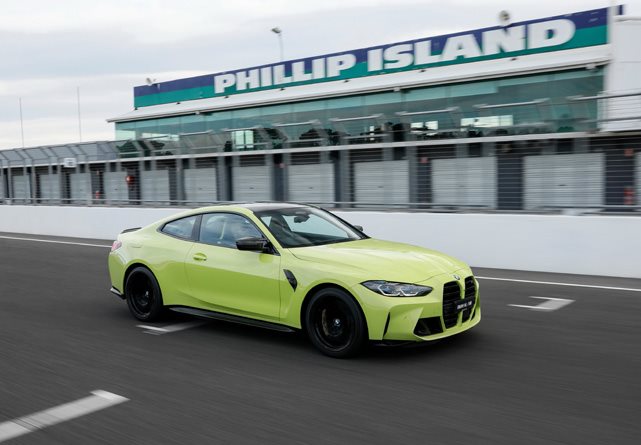 The standard steel brakes (380mm discs at the front and 370mm at the rear) are also particularly impressive, something you really get to appreciate at a track day, although I question why the car offers two levels of brake feel – Comfort and Sport. I just want good brakes all the time.

Overall, though, I have very few complaints and many compliments. Some years ago I saw some reader research that suggested Wheels enthusiasts coveted a Porsche 911 as their dream car, but their more realistic goal vehicle was a BMW M3.

The M3 is, once again, my perfect family car, but if I didn’t have children, I’d choose the M4 for sure, just because it looks so much hotter.

There were some people at the launch who believed they could detect differences in the way the M3 and M4 handled the track, and suggested the M4 felt just that tiny bit sharper and more involving than its sensible sedan brother. To be honest, I was equally blown away by both of them. 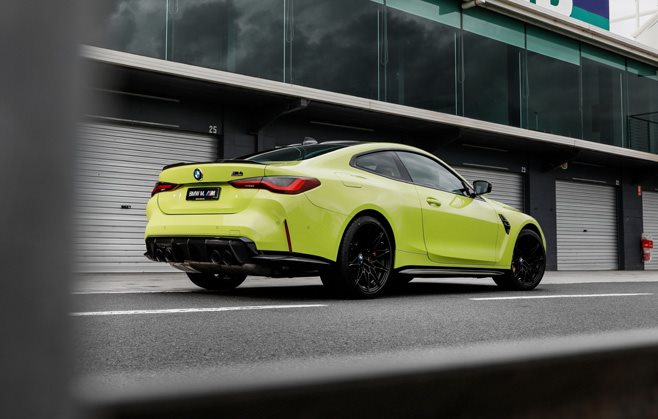