If you’re new to the Toyota Corolla ZR, there’s a chance you’ve got one of two preconceptions about this version of the most popular of hatchbacks.

The first could be that you’ve been to Toyota’s website and seen phrases such as “turn up the fun” and “takes performance to new levels,” and therefore expect a hot hatch.

The other is that, like many misinformed enthusiasts, you believe the Toyota Corolla to be something of an appliance on wheels, a car built merely to get somewhere and with no thought to driving dynamics.

Thankfully, and perhaps part of the reason for the Corolla’s continued dominance as the most popular car in the world, neither of these is true.

Toyota’s current 11th generation Corolla, first introduced in 2018, has in the company’s own words “ushered in a new era for Toyota's venerable small car”. And it’s not wrong. 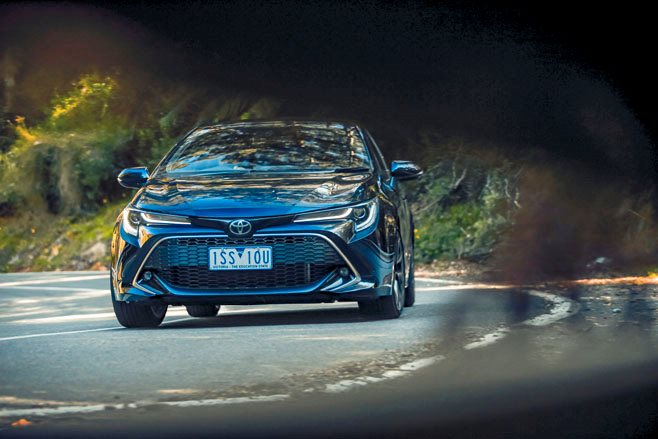 Using the same Toyota New Global Architecture (TNGA) platform as most of Toyota’s current range, including its much-lauded GR Yaris hot hatch, the Corolla is designed to be able to be driven in just about any manner the driver chooses.

This isn’t to say it’s a sports car, but there is plenty to like about it. In ZR specification, the top badge for the current range, the Corolla is comparatively crammed with features and conveniences the brand hopes will lure buyers to its $32,695 (plus on-roads) asking price.

The version we’re reviewing here has Toyota’s 2.0-litre naturally aspirated four-cylinder engine, with 125kW and 200Nm at its disposal. The engine is also available in Ascent Sport and SX models, delivering the same outputs across the range. Another $2000 on the ZR’s price gets you a hybrid drivetrain. In the ZR, the engine is mated to a CVT transmission with a single traditional gear for launching before the CVT takes over. A six-speed manual gearbox is only available in the Ascent Sport base model.

Setting Melbourne as an example city with Toyota’s pricing calculator reveals the more accurate driveaway starting price as $36,916, which includes Toyota’s standard five-year warranty. If you hope to sell a Corolla after a couple of years, the good news is that the Corolla benefits from a solid reputation and won’t lose much value – many are still asking for more than $25,000-$30,000 in decent condition. The downside for used sellers? That there are so many available. 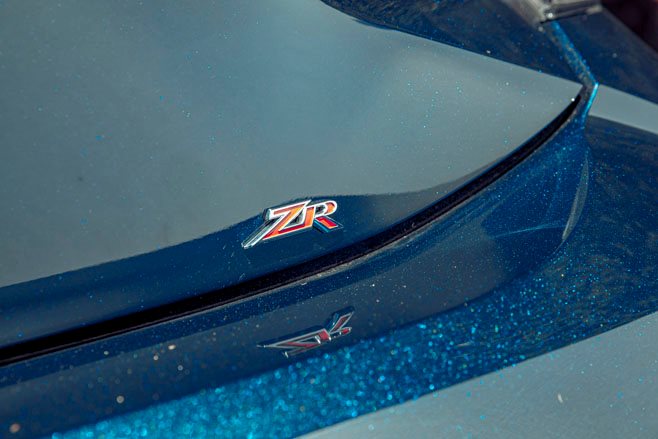 Toyota also allows buyers to see the prices of servicing in advance, with the first several intervals costing $180 each for the Corolla ZR, until the 90,000km service that jumps to $793 due to it involving the inspection and tightening of nuts and bolts on the car’s body and chassis. Prices then vary between $250 and $800.

For the Corolla's asking price, there’s a fair list of standard equipment to be had. On the ZR, one of the most immediately obvious additions is its 18-inch alloy wheels, rather than the smaller 16s on Ascent and SX trims. From the outside you can also note the chrome-look trim around the side windows, front bar, and exhaust exits, which is just black plastic on the lower Ascent Sport and SX variants.

Overall, the exterior steps away from the sometimes-dowdy looks previous Corollas have served up, leaning into a more stylish and sporting design. That theme continues for at least parts of the ZR’s interior, where the top-spec variant gets a pair of leather-appointed, sports-oriented bucket seats with a suitable balance between comfort and bolstering. 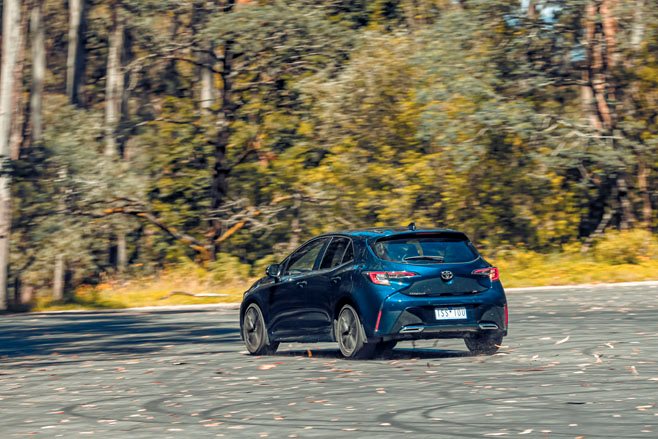 While the interior feels generally upmarket thanks to features like its head-up display, eight-speaker JBL sound system (which sounds decidedly better than most basic systems) and its larger 7-inch display (all exclusive to the ZR), it’s still relatively modest in terms of visual flair. The leather on the seats can be had in red for a little more visual zing.

For the phone-dependent, the ZR keeps the wireless phone charger pad that’s also available in the lower SX spec, while Android Auto and Apple CarPlay are both now available across the Corolla range. Phone mirroring wasn’t available when the current-gen Corolla launched, much to the frustration of many.

One thing the Corolla did get when it launched, however, was a five-star safety rating from ANCAP, helped by its suite of driver-assist tech including active cruise control, lane assist, pre-collision system, auto high-beam, and a road-sign detection system that keeps the driver aware of the speed limit. 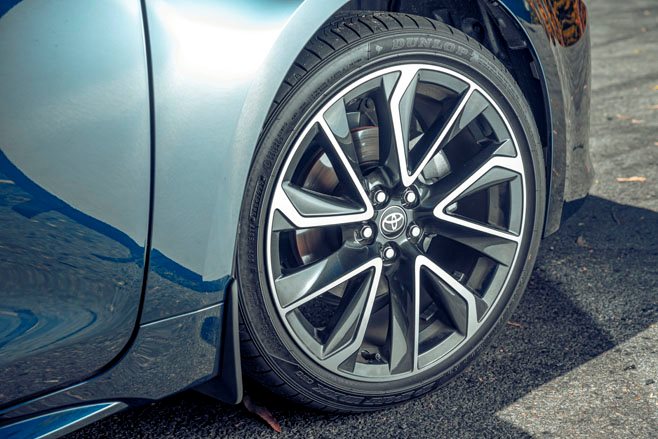 While these elements, and the fact the Corolla is a very easy car to drive, are all decidedly set on keeping a driver out of trouble, it also has seven airbags just in case, standard across the Corolla family.

How it feels to actually sit in the Corolla ZR is harder to convey with words than a list of features, but it’s a pleasant surprise to feel so comfortable and ‘in sync’ with the car in terms of its driving position and ergonomics. It’s clear that Toyota’s designers and engineers know this car needs to be incredibly easy to use and drive.

The seat itself is positioned for comfort and ease of access to the features that are likely to be used regularly, the touchscreen is within reach and the gear selector sits comfortably positioned for use in a relatively neutral posture.

The steering wheel is also sufficiently adjustable and fits nicely in the hands, being well-shaped for a 9-and-3 position with the wheel buttons easy to reach with your thumbs.

It’s got plenty of useful, albeit pretty standard features at the driver’s disposal. The two centre cupholders, however, are a little awkward to reach and sit in a spot at risk of elbow bumps. Storage spaces are a little small too. The console storage bin isn’t much bigger than a couple of cans of drink, and the glovebox sits a little awkwardly under the dash. 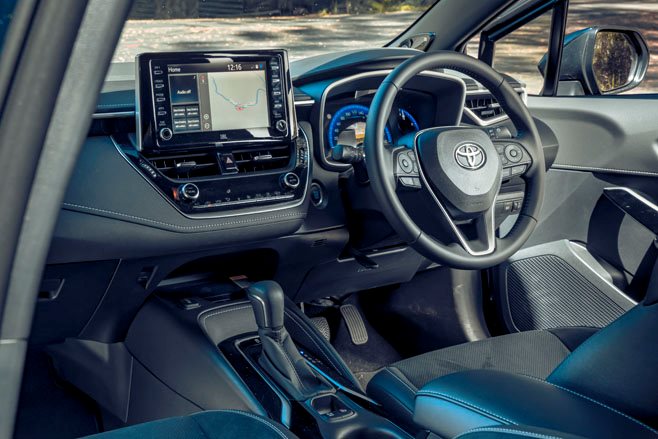 We’d like to say there’s at least plenty of storage in the boot, but there isn’t. The Corolla’s boot is a comically small 217 litres, due in part to its spare wheel under the boot floor. Compare this to rivals, like the 295 litres in the Mazda 3, or a cavernous 395 litres in the Hyundai i30, and the Corolla’s boot is put into perspective. On the upside, front occupants can fit a couple of 600ml bottles in each door.

In the rear seat, storage is once again lacking. Rear passengers get cupholders in the door armrests and document holders behind the front seats, but the seating positions allow for relatively tall adults to be comfortable with decent headroom and kneeroom. The rear does look a little more cramped than it really is, which we’re chalking up to the lack of light due to privacy glass, and the rising rear window line.

One aspect of the Corolla, as well as its showroom stablemates, that we feel Toyota could still work on is its infotainment system. While the physical touchscreen is fine and the addition of smartphone mirroring means it’s likely not a dealbreaker for most, the system is still a little awkward to use and comes across as dated. It feels like something the largest carmaker in the world could benefit from a little investment into updating. 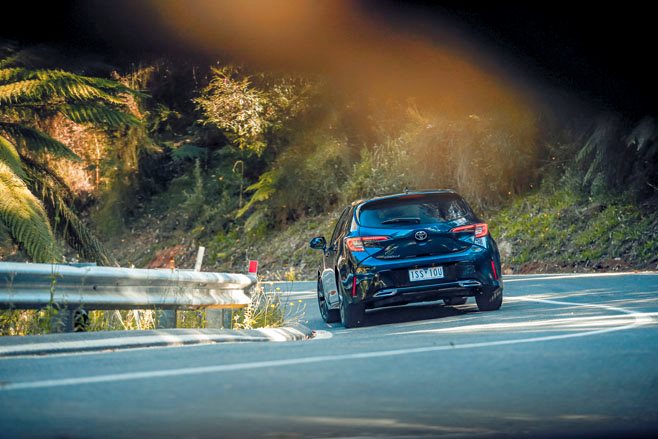 A much smaller frustration that Toyota has overlooked here is the HVAC controls. Or at least, their design. The climate settings are all in a row of 10 buttons for things like temperature and fan speed, but the icons that display which of the near-identical buttons does what are on a gloss black panel which reflects light easily, meaning it becomes a struggle to see what you’re changing. Potentially quite distracting.

With those small issues considered, the Corolla is still above average in its class for comfort and usability, though the mechanicals and driving dynamics of the car leave even more to be discussed and dissected. Let’s start with the engine. While the functionality of the engine is hard to fault, its 125kW is behind the curve for a car that claims to make driving fun, and its characteristics when paired with the CVT gearbox leave much to be desired when driving spiritedly.

The launch gear in the CVT helps smooth out what would otherwise be slightly rough take-offs, but the gearbox takes some nudging to get enthusiastic, and the engine can sound a little overworked when it’s being pushed. 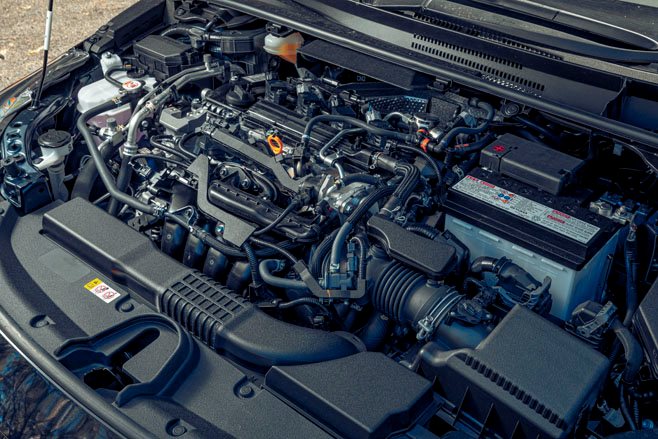 Thankfully, the chassis is brilliant, benefitting from the TNGA platform this car is built on. Toyota’s engineers have made the car easy and responsive to steer while allowing feedback to the driver without sacrificing comfort. The car is able to turn into corners or, if needed, swerve quite adeptly, and has also been granted an understeer prevention system that uses the brakes to keep the Corolla on your chosen cornering line.

It's not quite sharp to the point of being a ‘hot hatch’, or even warm, given the drivetrain isn’t eager enough to really push the chassis to its limits, but there’s talent there that an enthusiastic driver could have plenty of fun with.

And that seems to describe the Corolla well – a car that does just about everything well, but probably won’t blow your mind day-to-day. With the benefits the current, TNGA-based Corolla has under its belt, plus the comforts of the ZR, its approximate driveaway price doesn’t feel unreasonable.

It's not hard to see why the Corolla is the most popular car in the world, with such broad appeal, value, and competence at its disposal. 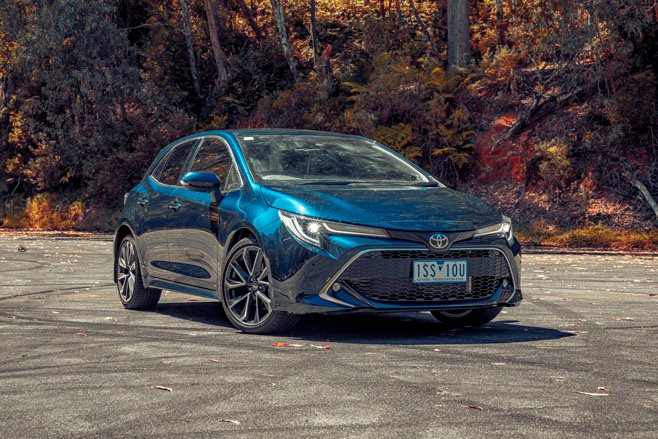