AUDI has launched the second generation of its largest sun-loving four-seater.

It’s not for everyone, but for those who like the option of transforming the Audi A5 into a sun lounge for the soul in 15sec, the new A5 Cabriolet is a welcome improvement. 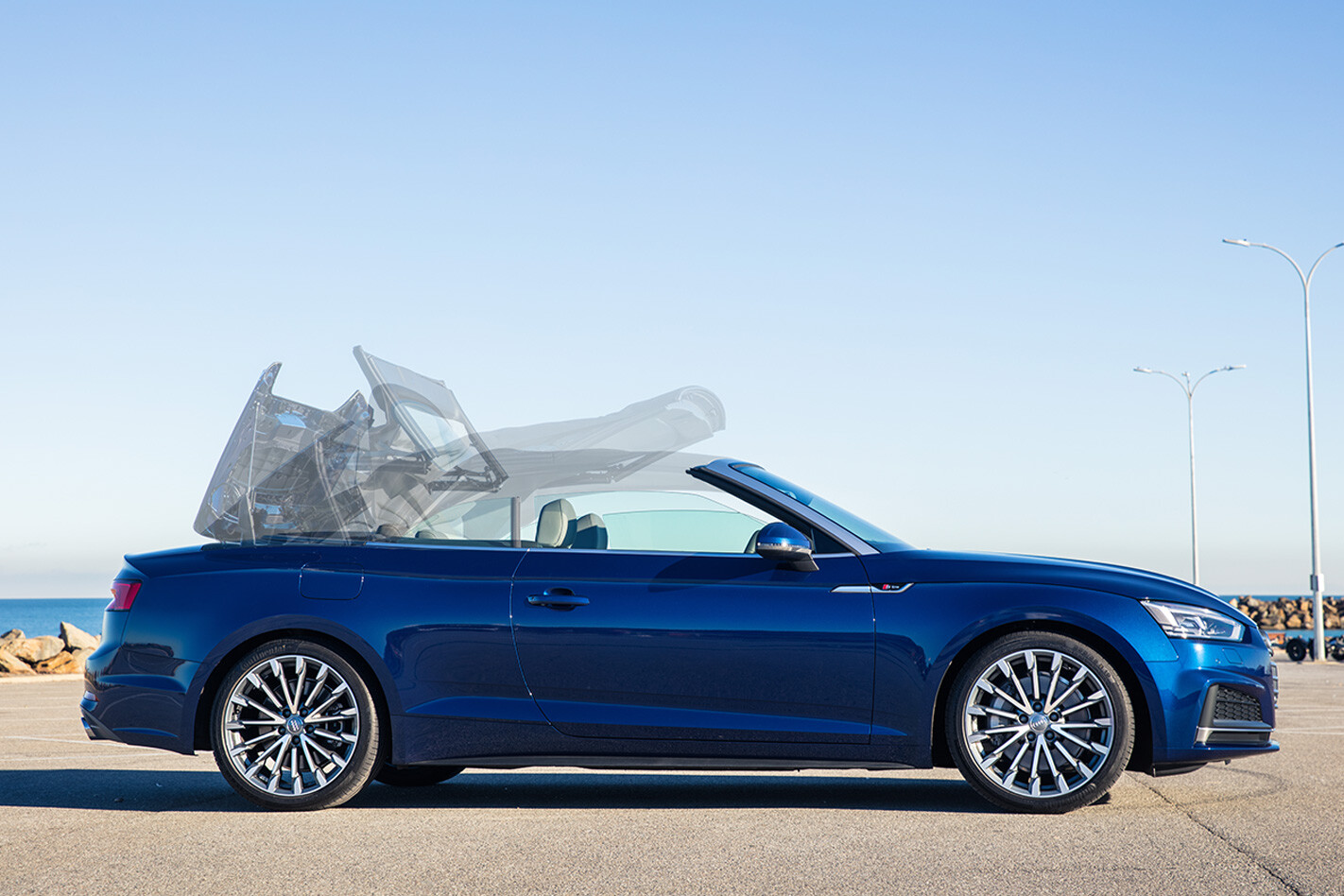 The second generation of Audi’s A5 Cabriolet. This generation drops the diesel engine — it only represented one in every 20 sales anyway — and sticks with two cooking petrol models with either front- or all-wheel-drive options.

The new A5 Cabriolet spins off the same transverse MLB platform that underpins the Audi A4 sedan and wagon, and A5 coupe and Sportback. More high-tensile steel in the right places makes this generation much stiffer than the one it replaces, hinting that the dynamics of the softest A5 in the stable may have improved.

The open air experience comes much quicker and over a wider range of operating conditions in the new and improved A5. And sometimes you’re better off shopping down the Audi range for the sweetest engine in the line-up. MINUS: Expensive options; breezy, cramped back seat; corrupted ride whether or not the roof is up or down

AUDI’S A5 Cabriolet is back, bigger, stronger, lighter, and with just two mainstream models on offer. Priced from $83,400 for the bum-dragging 2.0T – it drives nicely enough, but you’d get used to the front tyres scrabbling for traction – the quattro all-wheel-drive version is priced from $95,000. That’s more expensive than the old car by a couple of thou now that the former entry-level 1.8 TSFI is no more, but still less than what the main rivals will hit you up for. Add the $1846 metallic paint, $2500 S Line styling package, and $5600 Teknik pack (that adds LED headlights, a head-up display, and cracking 20-speaker B&O roof-down doof-doof system), and it starts to get a bit expensive.

This generation will drop its new five-layer “K-fold” cloth roof in 15 seconds via a long press of the key fob, or a push-once-and-forget console-mounted button – though putting the roof back up requires constant finger pressure. You can also raise or lower it at speeds below 50km/h. It’d be easy to dismiss the A5 Cabriolet as little more than the old one wearing a new skin. It’s not. Underneath, the open-air A5 uses the same five-link axle configuration front and rear as the closely related A4. However, seeing as the A5 has become the technology and design clotheshorse for the full Audi suite, the drop-top’s sculpted interior is simply stunning. It gets the full 12.3-inch digital dashboard, the wide expanse of air vents, cold-touch aluminium highlights, pleasing-to-the-touch plastics with a special heat-reducing coating on the leather-trimmed upholstery, and thicker glass that help cut out noise.

The more heavily sound-insulated cloth roof has a flatter rear window than before, and, in a neat little trick, reading lights for the two cramped back seats (they now have a whole 18mm of extra legroom) are built into the headliner. A pair of protective hoops will explode up from behind the rear headrests in the event that things go a little tits-up. The front seats have a built-in neck warmer that puffs harder when the roof is down, whereas microphones built into three different points in the seatbelt help the Audi deal with roof-down voice quality no matter how short, or tall, the driver happens to be. 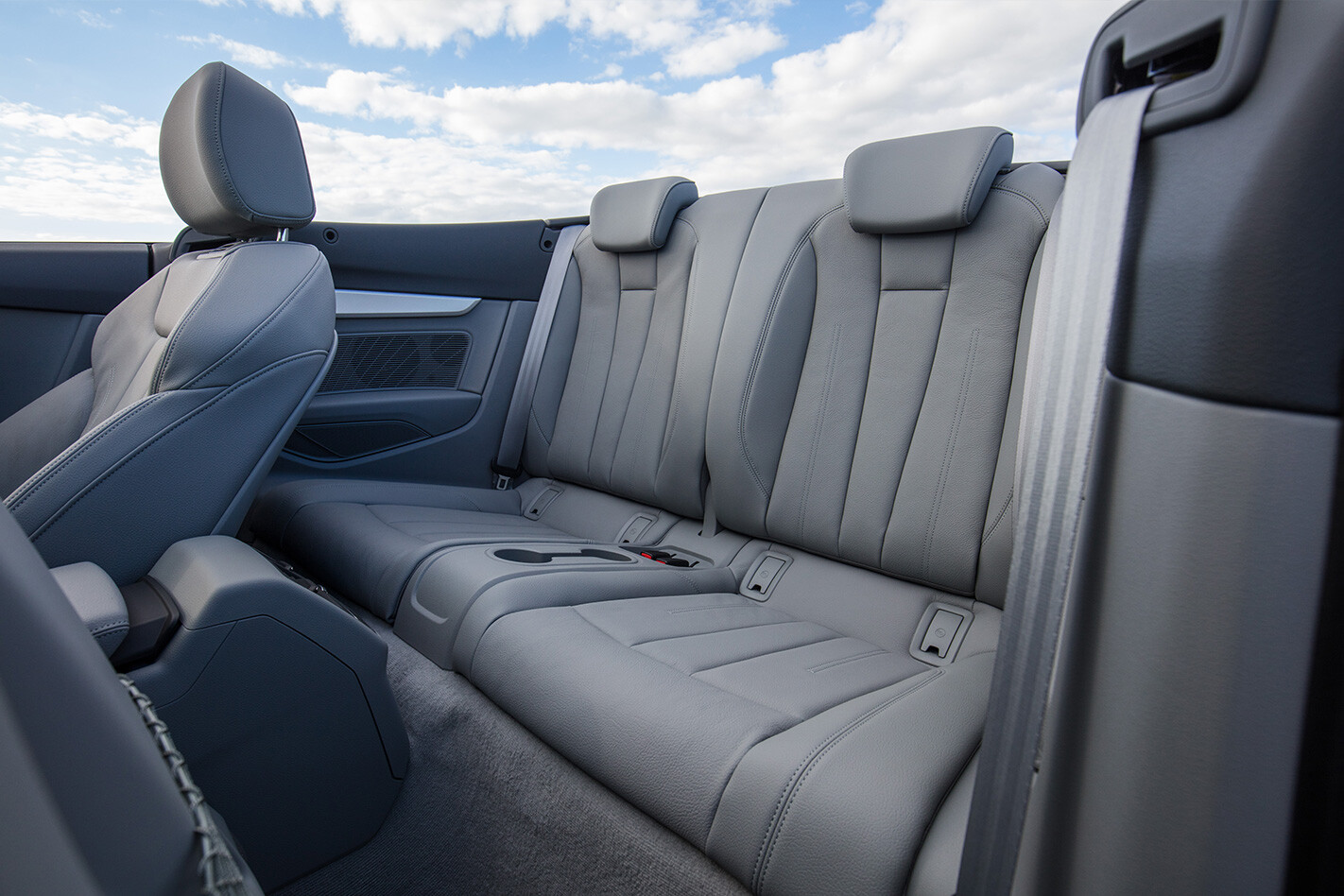 The new cabrio is also 25kg lighter than the previous generation, partly thanks to a more extensive use of high-strength steel used in the chassis, suspension towers, and bulkhead, but mostly via aluminium suspension bits that shed 10kg alone, and lighter brakes that strip off another 5kg. Rigidity has improved 40 percent, even if the A5 does still get a bit jiggy over rough sections of road.

And yes, that’s where things do get jiggy. This version of the A5 uses Audi’s cracking Miller cycle four-pot producing 185kW and 370Nm, but tap it and the A5 cabrio will show you what happens when the rigidity the roof once provided is lost. Yes, it’s good for a cabriolet, but the firmly damped ride on the 19-inch Bridgestone rubber means the arse end will dance around in the rear-vision mirror. And every now and again a deep shudder will pass through the suspension as the front and rear ends lose their connection, roof up or down, and it only becomes more noticeable as the $2210 adaptive dampers firm up. It’s a shame, because roof up the A5 Cabriolet is a pillarless quasi-coupe that tries hard. In Sport mode the steering, although a bit light and somewhat feel-free, has enough precision to make the boulevard cruiser feel like a sports car. Rapid-fire gear changes via the dual-clutch seven-speeder help to tap the engine’s performance, although it does lack aural excitement even with the roof down. And you’ll know you’re in the quattro too. By comparison, the front-drive 2.0 will sometimes scrabble for traction as it tries to lay its hamstrung 140kW onto the road. The more powerful quattro all-wheel-drive version, though, will just squat slightly in the rear and get on with the job.

The previous-generation A5 Cabriolet was a niche seller, and against the more handsome, practical, and dynamically capable A5 coupe and five-door Sportback, it will likely continue to be that way. Diesel is a dirty word

Audi elected to not offer a diesel-engined version of the A5 cabriolet in Australia despite having one in the previous generation’s model mix. The car maker claims uptake of the oiler was “very, very low” – snaring only about one in every 20 sales – and the engine was better-suited to markets such as Europe where emissions targets shaped the sales mix. In other words, it wasn’t worth the bother.