Acrid brake smoke rises from all four wheel arches as MOTOR pulls up at the designated driver changeover point in Marbella, Spain.

Bentley boss Wolfgang Dürheimer is nearby, and he’s not taking it as a compliment: “Would you drive as hard as this if it was your own vehicle?” he demands. “Better take it to the next village and back for a cool-down drive.”

Er, okay then. A few kays down the road, the brakes begin to recover. The pungent stench dissipates and the bite returns to the previously spongy pedal. But there is no smoke without fire and, in this case, the incendiary stoppers are lit by the 2442kg kerb weight of Bentley’s first foray into SUV territory. 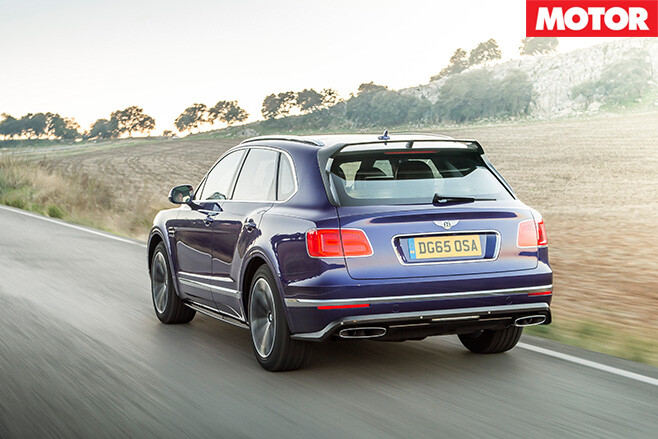 Measuring 5140mm in length and 2240mm wide (with mirrors), the Bentayga delivers fierce acceleration from its 6.0-litre W12, and consequently puts massive demands on its four huge steel discs.

Why steel when there are surely carbon-ceramics in VW Group’s parts bin? “Because the carbon-ceramic brakes are not quite production-ready yet,” admits senior engineer Rolf Frech. He assures us they are on the case, but it’s a curious admission.

Earlier that day, we did push the brakes to the brink of self-destruction onmore than one occasion. When the Bentayga’s hunched hind quarters felt the W12’s whip, the brakes copped a beating. Yet we never overshot an apex or ran out of road.

This surprisingly benign attitude at the limit is largely masterminded by the active body control system dubbed BDR (Bentley Dynamic Ride). Explains Frech: “Unlike other mostly hydraulically-operated applications, BDR is powered by small electric motors which respond a lot faster.” In combination with the air suspension and the adjustable dampers, the modular anti-roll bars are fundamental to achieving what Bentley predictably claims is best-in-class vehicle dynamics and controllability.

Thanks to BDR, turn-in is sharp and devoid of excessive bodyroll, early understeer or a momentarily wayward rear end. Even when cornering at the limit of adhesion, the heavyweight SUV remains flat and composed, stable and attentive.

Most owners could probably live without the swarm of pricey assistance systems, but the aforementioned BDR (standard only in North America) is absolutely essential. We know this for a fact, because a software glitch intermittently deactivated the system, quickly converting the agile and sure-footed crossover to an indifferent and ponderous colossus.

At least the variable-rate steering is linear, precise and responsive. By selecting Custom mode via the Drive Dynamics Control (DDC) knob on the transmission tunnel, you set the calibration of steering, chassis and driveline to your preference. After two days and plenty of experimental fiddling, Sport emerged as the most involving set-up and the best comfort-versus-handling compromise. 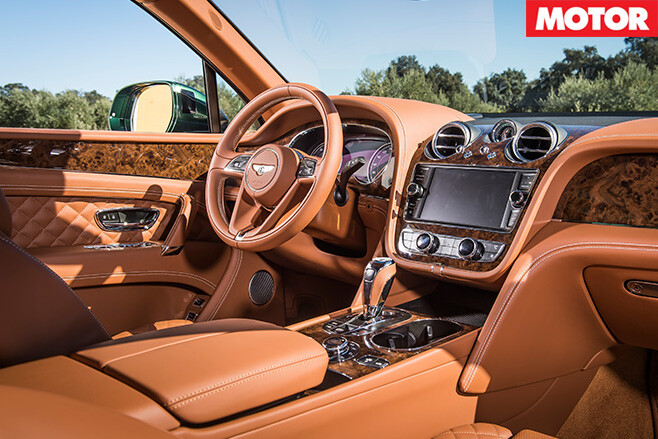 At a later stage in its lifespan, the Bentayga will be offered with less expensive petrol and diesel V8s, as well as a plug-in hybrid powertrain. To begin, though, the only available powerplant is the re-engineered 6.0-litre W12, which now boasts cylinder deactivation, a combination of direct and indirect fuel injection, and a start-stop system which cuts the engine long before the coasting vehicle comes to a halt.

Its power output of 447kW falls only 20kW short of the muscular Continental GT Speed, yet beats it for maximum torque, with 900Nm (up 80Nm on the GT Speed) on tap from 1250 to 4500rpm. Assisted by the standard all-wheel drive system, the bruising Brit can rip to 100km/h in 4.1sec, with rivals from Munich, Stuttgart and Solihull hot on its heels.

Beyond around 270km/h, though, the Bentayga is without peer. Thanks to its remarkably slippery drag coefficient of 0.34, relatively small frontal area, and low ride height, the Bentley is the only SUV which can crack the 300km/h barrier.

As for the design, the olde worlde styling, garnished with even more wood, leather and chrome, adheres to predictable Bentley fundamentals. Driver and front seat passenger travel in superior style and comfort, rear head- and legroom disappoint. 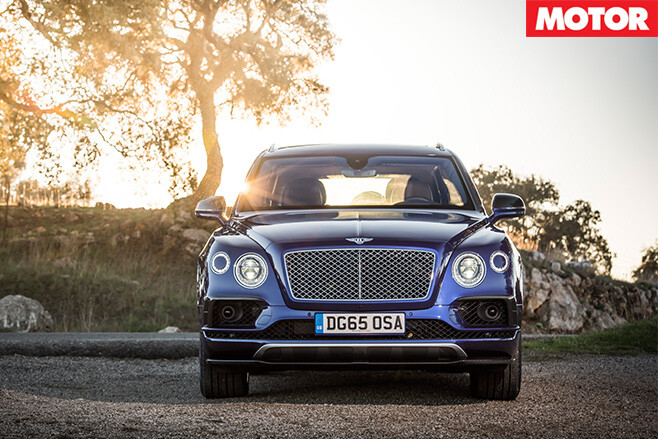 Current guidance for Australian deliveries is the third quarter of 2016. As usual, Bentley’s pricing is ambitious. Expect to pay around $500,000 before you even open the “configure my Bentley” web page, making the average on-road price owners will part with somewhere north of $600,000.

Still, the company only plans to build around 5500 units annually and most of that is already spoken for until the end of 2016.