An NFL line-backer in a suit

If you said the USA doesn’t build some of the fastest cars around, a few years ago at least, you’d be right. Today, though, you might be wrong.

Earlier this year, Chevrolet pressed the reset button with the introduction of the new Corvette Z06. It’s loaded with power, handling, brakes, and the necessary aerodynamics to back up its supercar benchmarks. Then there’s the all-new Camaro that promises to be light years ahead of the old one.

Cadillac, on the other hand, is keeping its end up, starting with the wicked-fun ATS-V and now the all-new, third-generation CTS-V sedan. 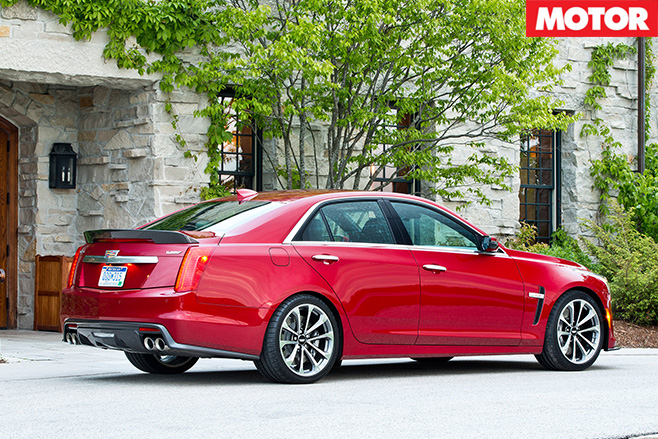 Ten years ago, this was the car that created the notion of a high performance Cadillac and it followed the basic hot rod formula – drop a one-size-too-big engine into a one-size-too-small sedan.

At the same time, performance cars were engaged in a horsepower war, but the new CTS has gotten even bigger. To speed-crazy Cadillac engineers, that meant their new grand sedan would need a serious boost in performance handling if it was to be worthy of the CTS-V badge.

And boost it they did, literally, using a similar supercharged 6.2-litre V8 to what’s found in the Corvette Z06 (there’s a theme here, we reckon) that makes a staggering 477kW and 855Nm. 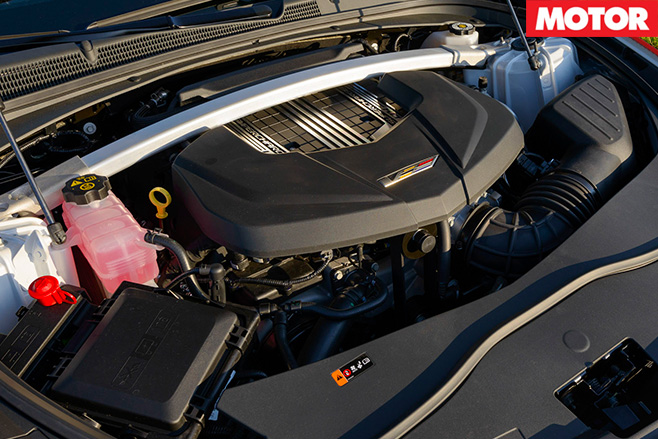 That’s just a few digits shy of the Z06’s supercar numbers, primarily due to exhaust packaging constraints in the CTS platform, according to Cadillac engineers. Regardless, that’s still more power than a Mercedes-AMG E63 S or BMW M5. Or HSV GTS, for that matter.

The cabin reflects modern Cadillac design, with clean lines and straightforward controls. Drivers enjoy a near perfect seating position with excellent forward visibility. When parking, we appreciated the back-up cameras and sensors. The optional Recaro buckets are worth the additional spend for an ideal combination of long distance comfort and on-track support.

There is only one transmission option for punters, and it’s a good one. GM’s developed an entirely new eight-speed automatic ’box that’s said to shift faster than Porsche’s renowned PDK on upshifts and nearly as rapidly on downshifts. 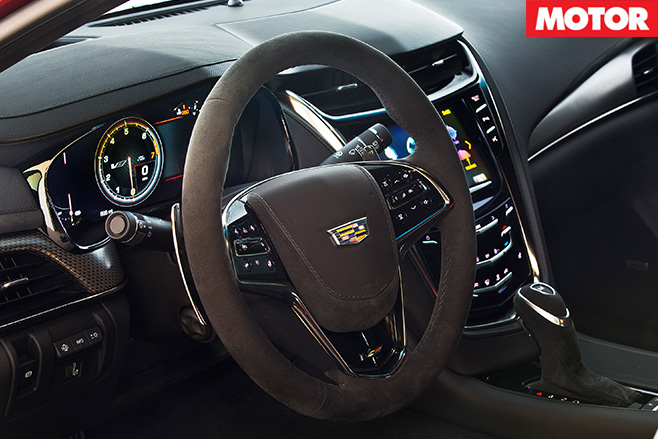 It does indeed shift quickly, though whether the shifts are indeed quicker than a top dual-clutch can’t be discerned by any human being, at least on this earth.

What’s more, while driving on the high speed Road America circuit, manual shifting wasn’t necessary, due to the 'box's excellent calibration and inherent ability to recognise that we were asking the car to hustle. Even in those conditions, the transmission chose gears with impeccable precision. The Corvette Z06’s automatic option? Same transmission.

Power gets to the ground through an electronically-controlled limited-slip diff, just like Corvette Z06 (there’s that theme again), which performed flawlessly for us. It always delivered the right amount of lock shooting out of Road America’s high speed corners and under braking it transitions to open for superb stability, which gives the driver even more confidence. 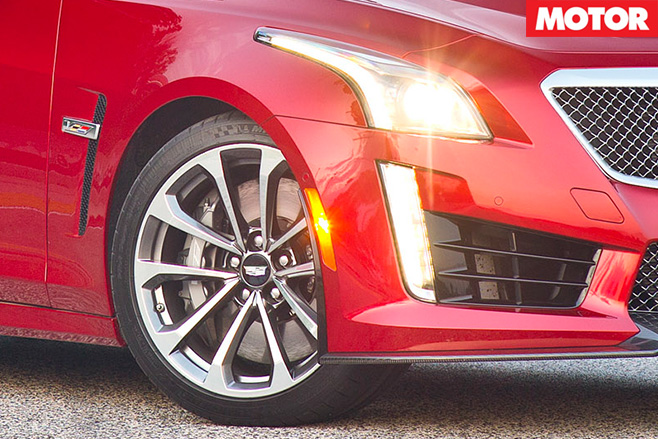 Braking is handled by Brembo. There are 390mm two-piece rotors up front, clamped by six-piston calipers, with four-piston calipers out back clamping 365mm rotors. Of course, for the CTS to handle all of the additional forces of the V treatment, the platform is stiffened front and rear with a range of strengthened components, braces, and bars, with the addition of a more rigid electric power-steering rack. Overall, chassis rigidity is up 25 per cent over the standard CTS sedan.

Handling is outstanding, which lends real confidence to the driver given the CTS-V’s monstrous grip and ample chassis, particularly for a four-door sedan that crosses the scales at nearly 1900kg. Rear drive and nearly two tonnes aside, this Cadillac certainly delivers. Nought to 100km/h happens in under four seconds. 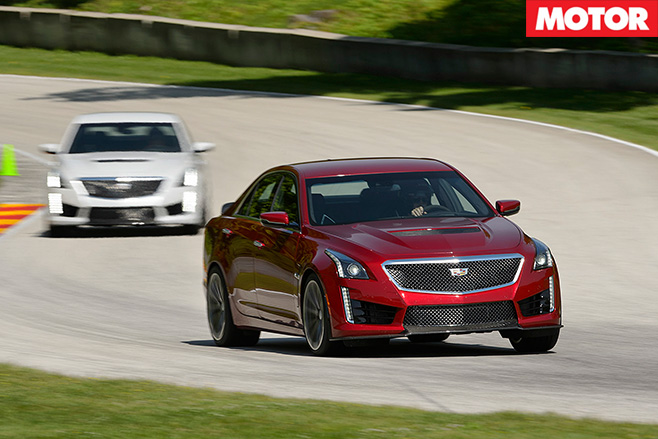 All handling credit is due to the latest-gen Magnetic Ride Control dampers and tyre choice. These GM-developed dampers are 40 per cent faster than the previous generation with discernible differences between comfort and more sporting modes. Michelin provides 265mm and 295mm-width ‘specially designed’ Pilot Super Sport tyres, which maintained consistent grip over multiple, high-g track sessions.

Perhaps the key to the CTS-V’s handling prowess is the Performance Traction Management system, with drive modes ranging from snow to track. Integrating multiple systems – ABS, traction, stability, dampers, and the e-diff – PTM optimises all of those variables for near-legendary sedan performance. 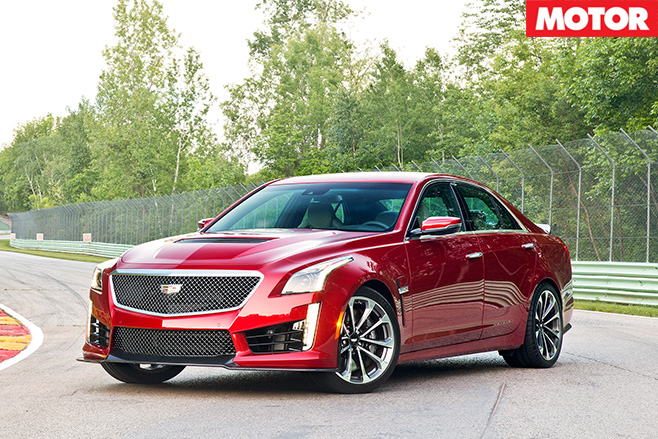 Aesthetically, the CTS-V is visually distinctive with its wider wings and spoilers, but don’t be fooled. The front splitter, rockers, and rear spoiler are all aero-optimised to be effective up to the sedan's 320km/h top speed.

Despite the similarities in theme, this isn’t a four-door Corvette. Nor does it have the little bit of crazy found in the likes of a HSV GTS. No, it’s much greater than that. It’s a proper, sophisticated super sedan – with the performance cred to stand up to anything from Germany – but with a distinctly American flavour. 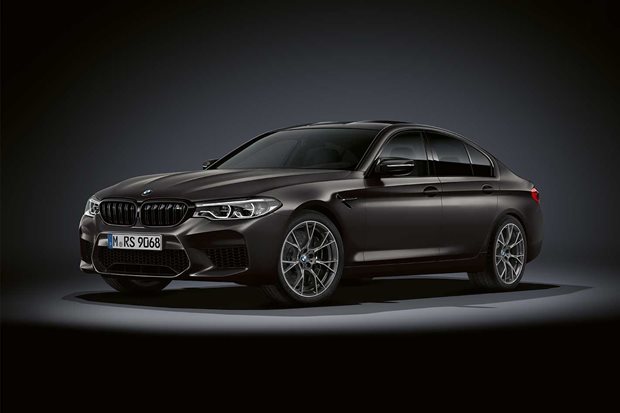 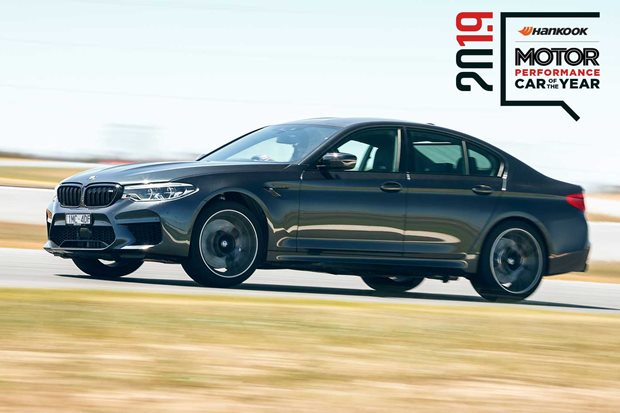 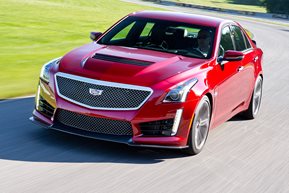