Reinforce the doors, lock your children in the garage and sharpen your kitchen utensils. Australia is under attack.

Supercharged V8 invaders have breached our borders, threatening to devour untold litres of high-octane unleaded and terrorise tyres regardless of size or compound. They might wear American badges, but this power-mad pairing hail from the underworld, muscle cars built to prowl Route 666. 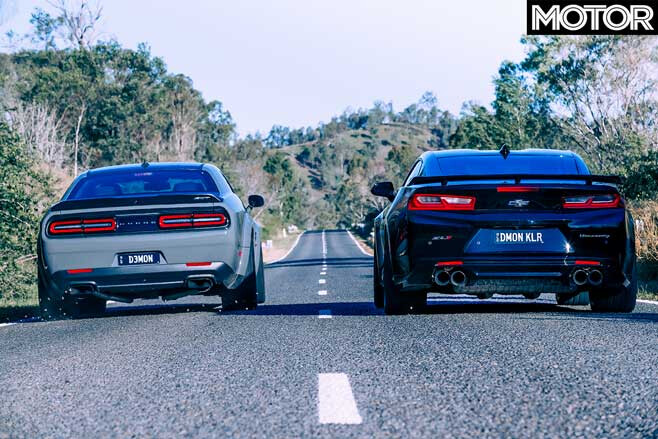 The Dodge Challenger SRT Hellcat Demon – Dodge Demon to its mates – is the world’s quickest-accelerating production car and has the Guinness Book of World Records entry to prove it. A full-throttle launch will pin your head against the seat with 1.8g of acceleration and lift the front tyres off the ground as it storms past 100km/h in 2.5sec on its way to a 9.65sec quarter mile at 225km/h, a time and trap speed that saw it banned by US drag racing body the NHRA.

In terms of production cars, the Demon is the muscle-car king, but as is typically the case, the aftermarket has gone a step further. Texan tuner Hennessey Performance never met a horsepower it didn’t like and is famous for sending outputs into the stratosphere. When it needed to vanquish the Demon, it created the Hennessey Exorcist, a Chevrolet Camaro ZL1 with a really bad attitude. Hennessey backed up its ambition by clocking a 9.57sec quarter at a crazy 237km/h, passing 97km/h (60mph) in 2.1sec and 161km/h (100mph) in 4.7sec. Top speed is a proven 349km/h.

There is only one right-hand-drive Hennessey Exorcist in the world, and it’s currently rocking side-to-side in a McDonald’s carpark on the outskirts of Brisbane, its idle as lumpy and aggressive as month-old milk with an alligator in it.

It’s the work of Adelaide-based KPM Motorsport, the only officially recognised Hennessey workshop outside the US. The process of turning a standard Chevrolet Camaro ZL1 into an Exorcist isn’t quick or cheap, but then screwing 1000 horsepower out of anything isn’t exactly easy.

Installing the Exorcist modifications takes around two weeks and involves a comprehensive upgrade of the LT4’s top end while also improving the cooling and exhaust systems. The valve springs, retainers, intake and exhaust valves, pushrods, lifters and intercooler are all upgraded, the cylinder heads are ported, a custom camshaft, high-flow catalytic converters, stainless steel headers and mid-pipes are installed, and the whole lot is topped off by a high-flow supercharger pumping in 14.5psi of boost.

Just 100 Exorcists will be built worldwide, with three allocated to KPM. Presumably the final two will be based on HSV-converted ZL1s, but the owners of this original example were so eager they imported a US ZL1 and had it converted to right-hand drive by Brisbane outfit SCD American Vehicles, which kindly supplied the Dodge Demon for this feature.

Local exposure to these mighty Mopars has been extremely limited and the first surprise is just how vast the Challenger is. At more than five metres long and two metres wide, it dwarfs the Camaro, occupying a similar amount of real estate as a Range Rover.

The 18-inch wheels look like 15s, but the massive Nitto NT05R drag radials it wears as standard are evidence of its unique nature. Put simply, the Demon is unlike any other production car. It’s designed to live its life a quarter mile at a time, but for those 10 seconds or less it’s definitely not free, as the landed cost of this beast is around $300,000 depending on exchange rates. If you need the looks but not the performance, the regular Challenger R/T can be yours for under $100K. Do that, though, and you won’t be treated to the shrill supercharger whine that accompanies every metre you travel in the Demon.

Compared to a Challenger Hellcat, the Demon’s 6.2-litre HEMI V8 scores a larger 2.7-litre supercharger, stronger connecting rods and pistons, an improved lubrication system, two dual-stage fuel pumps (instead of one), larger injectors, strengthened fuel lines, a larger air box and an increased rev limit, up from 6200rpm to 6500rpm. On 100-octane race fuel and the optional engine controller, you will have access to 626kW/1040Nm; sadly, today on 98RON we are limited to ‘just’ 603kW/972Nm.

From the outset, the Demon punches the Ferrari 812 Superfast in the face and becomes the most powerful car I’ve ever driven. But it’s not some grumpy, over-fuelled nightmare in morning traffic; on the contrary, it feels extremely normal.

The interior will be familiar to anyone with a Chrysler 300, as you sit high on large, squishy seats that offer little in the way of lateral support, the only evidence of the right-hook conversion the cramped foot-operated park brake operation.

There’s even a 373kW mode for cruising (or you can limit power to this using a black key rather than the standard red one); this makes the Demon feel like a Mustang Ecoboost, which should illustrate how berserk it is at full noise because even in low-power mode it’s probably as quick as a Mustang GT.

It’s also extremely comfortable. The Demon’s suspension is much softer than the Hellcat it’s based on, the spring rates dropped by 35 per cent front and 28 per rear and the anti-roll bars by 75 per cent front and 44 per cent rear. This is all in the name of promoting weight transfer on the drag strip, but it also makes the Demon a 600kW supercharged sofa, lolling lazily over large bumps and ironing out road imperfections. What’s better, the Performance Pages screen in the infotainment allows the drivetrain to be switched to maximum attack while leaving the suspension soft.

The Exorcist instantly feels fitter, firmer and more focused, though the Magnetic Ride Control dampers still provide more than acceptable levels of ride comfort. You sit lower than in the Demon, though still relatively high, but the cabin architecture and pillbox-style view out of the Camaro’s turret-like glasshouse make you feel more ensconced in the car. This is just as well, for if you’re driving an Exorcist you’re in for a wild ride.

It’s remarkably civilized given the outputs. There is more mechanical noise than in the Demon, but there are no hiccups or stumbles on light-throttle operation – often an Achilles’ heel with high-output cars – and the power arrives smoothly and progressively. Before long, temptation takes over, the accelerator is floored and all hell breaks loose.

There’s a pause as the 10-speed automatic scrambles for the right ratio before the Exorcist unleashes an assault on the senses; your ears overflow with V8 snarl and supercharger scream, your body is squashed into the seat and the world outside becomes a blur as the traction control frantically tries to stem the tsunami of torque being fed to the rear wheels.

The experience is difficult to process. Full-throttle acceleration is accompanied by the rapid rise and fall of the tacho needle as the Exorcist consumes the close-ratio gears as quickly as you can count them. Electronic intervention is the only way to control the power; relax the ESP via GM’s Competition Mode and the 305/30 Goodyear Eagle F1 Supercar 3s don’t stand a chance.

It’s not often that a Dodge Demon will offer a comparatively calm experience, but with less power, more weight, fewer gears and wider tyres, it’s a more cohesive machine. If that sounds a bit boring, or your friend happens to have an Exorcist, KPM can upgrade the Demon with Hennessey’s HPE1000 or HPE1200 kits.

Consequently, you’re often a gear higher than feels natural, but it makes no difference to the Dodge’s rampant performance, each straight devoured in a furious rush of supercharger whine.

The eight-speed auto is expertly calibrated, keenly and quickly firing in downshifts under braking of its own accord, freeing the driver to focus on the corner ahead. This is particularly important, as there’s a shock coming when the wheel is turned and very little happens; the chassis work that makes the Demon such an effective cruiser and drag strip warrior does it no favours in the bends, resulting in a two-tonne muscle car with soft suspension and fairly approximate steering, by modern standards at least.

It can still be hustled along at a fairly rapid pace, primarily due to the massive rubber footprint, but it’s not a hugely rewarding experience. Its size inhibits it on smaller roads, and wider, more flowing stretches exacerbate its weight and softness, substantial body roll produced in response to even moderate levels of attack.

Switch the focus from fast to fun, however, and the Demon delivers in spades. Seemingly limitless power, a massive wheelbase (35mm longer than a VF Commodore) and a chassis built for comfort, not for speed, makes for an A-plus drift car. On public roads it displays only a hint of its potential, but the progression with which it loses grip provides strong evidence that on a track the Demon would be a tyre-slayer almost without equal.

Initial impressions that the Exorcist is the sharper machine are solidified from the first turn of the steering wheel. There’s greater precision courtesy of the quality of the base Camaro ZL1. In true weird Camaro style, the steering is very heavy, but once accustomed to the heft the Exorcist can be placed accurately and the car’s stiffer set-up and grippier tyres ensure it doesn’t deviate from the chosen line.

The exception is in tight corners under heavy load, where the steering freezes, all assistance seeming to evaporate, which is disconcerting to say the least. Thankfully, the occurrence is infrequent and the steering never locks completely.

The other caveat is that the above assessment refers to flowing the Exorcist from bend to bend, enjoying the strong brakes, balanced chassis and responsive gearbox, which doesn’t once deny a downshift and delivers snappy upshifts. Attempt to unleash the full fury of 746kW, however, and this steroid-fed Chevrolet morphs into a monster.

I’ve never driven another car that commands such respect on dry, warm roads; fifth-gear throttle-steer throughout 100km/h sweepers is not difficult to achieve without getting near full-throttle. The electronics obviously heavily restrict such behaviour when fully activated, but using Competition Mode to gain a glimpse into the Exorcist’s ultimate abilities provides enough slip that the driver needs to be very much awake. I mention fifth gear, but to be honest the Hennessey’s potency is such that it would probably oversteer in 10th given the opportunity.

It’s absolutely overpowered. Of course it is. Adding 300kW (this car was dyno’d at 1035hp, or 771kW) to a car without changing the suspension or tyres is always going to upset the equilibrium. But it’s also incredibly exciting in a way no modern OEM vehicle can match, providing limitless power and leaving it largely up to the user to exercise it responsibly. The flipside of the engine-only approach is the Exorcist’s sleeper potential; delete the badges and stripes and you could be looking at a standard Camaro ZL1. Until it starts up and idles like a Funny Car.

There is a certain irony to the name – Hennessey set out to build a Demon tamer, yet it’s the Exorcist that feels the most unhinged – the more likely to spin around spewing green slime.

In contrast, the Demon is relatively mild-mannered. Its pumped guards and gaping ‘Air Grabber’ bonnet suggest a fearsome beast, but its behaviour when driven hard is more BeetleJuice than Nightmare on Elm Street.

Better still, it feels like an old-school muscle car built with new-school know-how, a throwback to over-engined monsters like the Ford Mustang Boss 429, Dodge Charger R/T 440 and Plymouth Road Runner. It wants to cruise in comfort and dominate the quarter mile; after all, there aren’t any corners in Detroit.

Open the door, let the kids out and put away the kitchen knife – these invaders are more than welcome to stay.