It’s not easy to buy a Dodge Challenger SRT Demon in Australia, nor is it cheap. But it is possible.

If you want one like the right-hook example you see here, supplied by Queensland company SCD American Vehicles, by the time it’s imported, complied and converted you’ll be looking at around AUD$300,000, a fair increase over the US$84,995 it costs in its homeland. 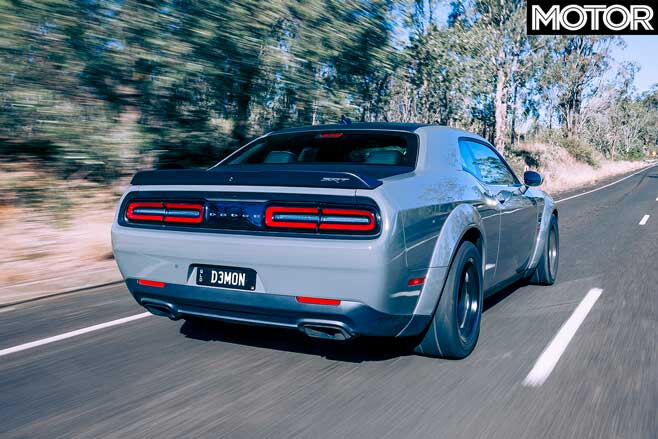 Then again, the Demon is in the Guinness Book of World Records as the fastest-accelerating production car in the world, capable of 0-97km/h (60mph) in 2.3sec and a 9.65sec quarter-mile at 225.4km/h. It’ll even lift its front wheels off the ground on launch.

To do those times and access everything the Demon has to offer, you need to delve into the depths of the optional ‘Demon Crate’ and pull out the narrow front-runner drag wheels, performance parts, throw away the passenger seat and mirror and, crucially, plug in the powertrain control module, which unleashes the full 626kW/1040Nm if there’s 100RON fuel in the tank.

Sadly, we didn’t have any of this and were thus limited to a mere 603kW/972Nm, the former still sufficient to make the Demon more powerful than any other production car on-sale in Australia.

Even without the extra goodies, Dodge’s ultimate Challenger is still a special piece of kit. Compared to a Hellcat the 6.2-litre supercharged HEMI V8 scores upgraded pistons, con-rods and valves to cope with the added stress of a larger 2.7-litre supercharger, 14.5psi of boost and a higher 6500rpm rev limit.

The Air-Grabber bonnet scoop gulps in air, two dual-stage pumps feed in masses of fuel and the Power Chiller sends the charge air through the air conditioning refrigerant to keep temperatures under control.

Unsurprisingly, it’s a berserk engine, but only when you want it to be. Its manners are impeccable in suburban driving, the eight-speed auto slurring through the shifts and the constant supercharger whine the only hint of the nuclear bomb that lies under the bonnet.

Floor the throttle and the gearbox instantly stands to attention, slotting the appropriate gear to unleash hell. Unusually, for a car with more power than the eastern seaboard’s electricity grid, the gearing is very short, each ratio a blur as the electronic speedo struggles to keep up.

MOREHey Charger - why FCA needs to bring back a legend

The Demon is a heavy car at almost two tonnes yet this monster of a powerplant picks it up and throws it down the road like it’s made of pure carbon fibre. To put it in context, drive it in 500bhp mode and it feels like four plug leads have fallen out, despite the fact that 373kW and 1900kg-odd is still a pretty potent package.

At no point in the Demon’s development were corners involved. Compared to a Hellcat, the springs and anti-roll bars have been softened significantly and while in its lightest guise the Demon is 89kg lighter, our test car has a full interior and is thus no skinnier than standard.

With that in mind, it handles fairly well, but the corner speed it develops is almost entirely down to the enormous 315/40 ZR18 Nitto semi-slick tyres it wears at each corner. The steering is quite vague around the straight-ahead and there is an initial moment of alarm when nothing seems to happen on corner entry.

It feels big and heavy, rolls significantly and the process isn’t helped by a driver’s seat that is set high and offers very little lateral support.

It’s also hilarious fun. With such enormous power, a massively long wheelbase – the design hides the fact that Challenger is a huge car – and soft suspension, when the Demon starts to oversteer it happens in slow motion.

On a track, it would be a tyre-shredding drift car extraordinaire, but even on the road there’s huge enjoyment to be had slithering from corner to corner at not especially high speeds, particularly as the gearbox is extremely responsive, decisively choosing the right ratio, and the engine always has power to burn.

The upside to this suspension setup is truly remarkable ride quality; the Demon is an extremely comfortable car. SCD does a good job of the conversion, too, the only evidence of the switch the cramped foot parking brake operation.

The interior is identical to that in a $65K Chrysler 300 SRT, it handles like a boat and the fuel use is truly terrifying. But the Demon is a true successor to the over-engined Detroit monsters of the late-1960s. Unlike the Camaro and Mustang, it’s not a sports car trying to be a muscle car.

In a garage that already had one of everything (or most things) there should be a space for a Demon (or any Hellcat variant). It’s a comfortable cruiser that looks awesome and is capable of destroying tyres and terrifying passengers at a moment’s notice. God bless America.