Poor 2019 Ford Mustang EcoBoost. This is a car written off by too many, too early, for being some inferior creation, blotted out by the large, hulking shadow of its V8 bigger brother.

But only the close-minded would think having half the cylinders gives the irritatingly-named EcoBoost (something that should be nothing more than a badge saved for the bootlids of Mondeos) half the appeal. Certainly that’d be true if not for an exhaust-driven air pump attached to the side of the engine. It’s very easy to imagine standing around with mates eyeballing a Mustang and someone jokingly wondering what it would be like with a 224kW/441Nm Focus RS engine between the front strut towers, a much lighter engine with a much better specific power output than the V8 (97kW/litre vs 68kW/litre). Would you not be excited to see what it’s like?

And it’s in this vein that, personally, I can appreciate the EcoBoost for what it is, not what it isn’t. (And probably this is why I’ve got it down in sixth place where all the other judges do not – they’re wrong.)

This is a car that, yes, looks like it should have a V8 but makes an odd, thrummy, hissing turbocharged noise complete with blow-off valve when you’re up it. To the point that, if you’d never heard the V8, you’d at least think the EcoBoost sounds enthusiastic.

With decent acceleration (a 14.38sec quarter from another test isn’t terrible), it’s more the handling that gets your attention in the EcoBoost when driving back to back with the V8. Manual and auto, the EcoBoost weighs an average of 66kg less than the V8.

And because of this, there’s a much more eager front end, with a lot more life to it, making the V8 feel to have a 60/40 weight distribution. And so on a track, it’s refreshing to find a more agile handler in the EcoBoost, and a car that’s slightly easier to drive fast. Indeed, this is a better handling Mustang. Particularly in wet conditions.

You’ll still get smoked by the V8 down the straights, of course, but you can imagine the EcoBoost attracting a very different customer. And both people loving their cars equally (even if they’d never fraternise).

Where this turbo ponycar doesn’t fully pass muster is its price. Yeah, $49,990 in manual guise is a good $13K cheaper than a manual Mustang GT, and this is more or less why it finishes 10th and the GT 11th. But the 5.0-litre Coyote V8 in the GT gets the blood flowing such that one thumb of the starter button and you’ll be thinking about how to make that $13K work.

While it might have a lot more than half the appeal of the GT, objectively it’s still a less exciting proposition, and to balance this it really needs to cost more like $45K. Something with which this year’s extra-subjective BFYB formula seems to agree. Campbell - 6th
“Net it all out and it could be the ‘better’ sports car than the V8.”

Morley - 8th
“Like watching a car chase with a fart-joke soundtrack.”

Scott Newman - 10th
“Added character welcome, but not quick enough to back up its looks.”

Luffy - 8th
“The biggest difference between the EcoBoost and the GT is the lower weight over the nose with the turbo-four. Also, the damping is better to allow more pitched roll on entry to load the tyre. The engine feels unrefined through the rev-range but it was really good on change of direction through all the tight stuff.It’s probably easier to drive on the limit than the Mustang GT.” 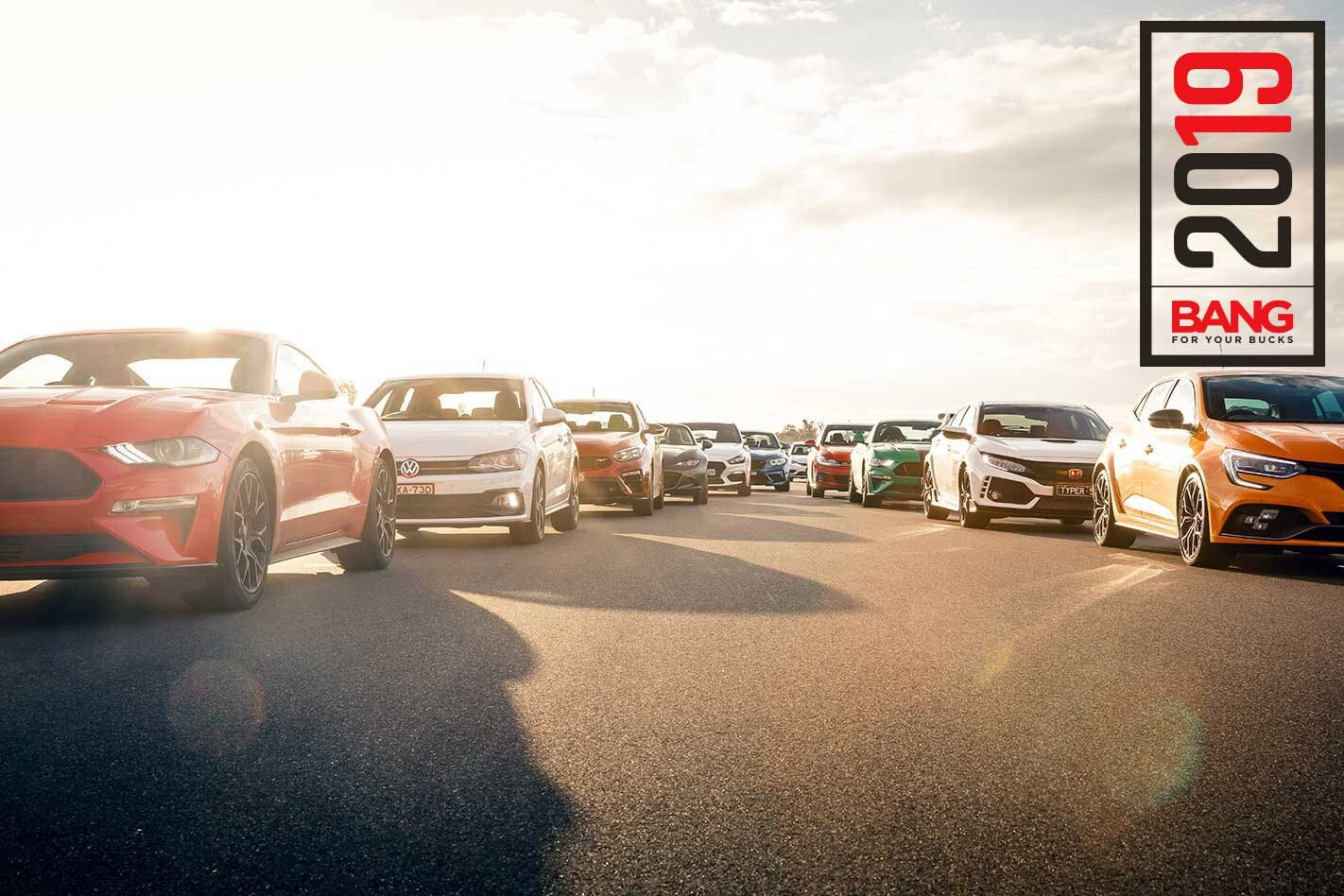