BEING particularly useless at suspense, I’m going to start with a spoiler.

The Golf 7.5 isn’t markedly different to the Golf 7 it has replaced. Volkswagen’s claim to have digitised the Golf hasn’t altered its fundamental character. We know the Golf 7 was great, so expect more of the same from iteration 7.5. Are we focusing on plot rather than character development here? Is this as much of an intro as we need to really get under the skin of the “new” Golf? To get the bigger picture, the answer is yes. Details? Well, a zippier 110kW unit replaces the old 92kW petrol engine, with a marked increase in torque on tap (up from 200Nm to 250Nm at 1500-3500rpm). The only transmission is a DSG dual-clutch, introduced at a time when the market seems to be leaning towards more rugged torque-converter automatics. The driver interface has indeed enjoyed a digital makeover, with the option of an Audi-style virtual cockpit should you choose to start showering your VW dealer in supplemental currency.

In other words this is a Golf 7 that’s been slugging back that energy drink that promises to improve you a bit. The Hyundai i30 SR Premium, on the other hand, can’t really be compared with what has gone before, so markedly improved is it in virtually every regard. Against the European haughtiness of the Golf, Hyundai still seems like a bit of an emergent brand, and the i30 SR a vehicle that in some prospective buyers’ eyes will need to perform twice as well to be thought of as half as good. 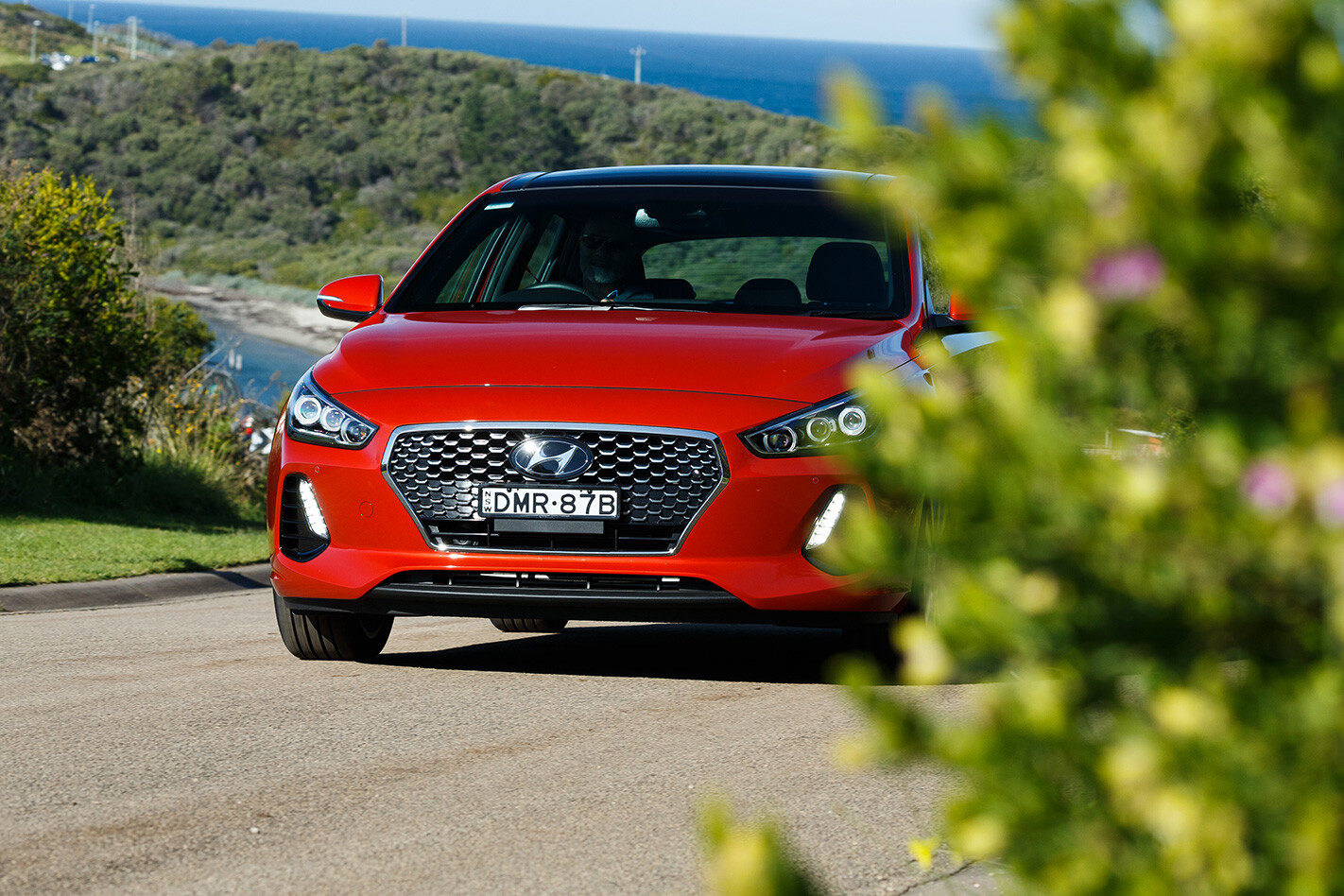 The Hyundai is a definite ’50-metre car’ though. You know, one of those vehicles that you only need to drive half the length of a footy field to realise is pretty well-sorted. It’s initially soft in its responses, but there’s an expensive feel to the controls. The suspension is supple enough, the throttle map ramps up gamely as you roll through the first third of the pedal arc, and the seven-speed dual-clutch feels on a par with the Golf’s. The only initial gripe would be a brake pedal that needs a decent prod before it bites with any great conviction.

The Hyundai’s cabin is well finished, too, with anodised-look red details on the steering wheel, vent bezels and air con controls. I admit, this does sound terrible, but there’s just enough maroon in the palette to make them look anything but cheesy. The 1.6-litre SR Premium is a warm hatch and sometimes it doesn’t hurt to be reminded of that fact. The other way to alert you to its position in the i30 hierarchy is to mash the throttle pedal. At the Heathcote dragstrip, we recorded 0-100km/h in 7.3 seconds, with the 1.4-litre Golf a full second slower. Embarrassing admission time: the Golf was misfuelled with 95RON juice compared with the Hyundai’s 98RON, but even on a cold and rather damp track, it came within a tenth of Volkswagen’s quoted claim. The 150kW Korean’s advantage extends as the physics of drag intervene more strongly. It blows through 140km/h 2.4 seconds quicker than the Golf, and the 400m sprint. Bigger brakes (305mm discs up front versus the Golf’s 288mm rotors) also see it haul back down from 100km/h to zero in 38.6m to the Volkswagen’s 40.4m showing. It’s starting to look as if the Golf has found itself a long way out of its depth.

Pricing doesn’t help that perception. With no options and before on-roads, the i30 SR Premium costs $33,950, with the Volkswagen Golf 110TSI Highline adding $540 to that asking price. I can hear you wondering why you’d pay more for a car with a smaller engine, less power, a hugely inferior warranty, and which also consumes more fuel, has a smaller boot and a less-generous equipment provision. We did. Spend a few days with the cars and you start to understand why you would. Part of the appeal of the Golf is that the car’s development followed a continuous and logical path. Each model – even the maligned Golf MkIII – has followed an unemotional strategy of improvement, Volkswagen responding to customer demands and forensically analysing what works for buyers and what doesn’t. It’s a little like a Porsche 911 or a BMW 3 Series in that regard, with each generation becoming ever more sophisticated. This is not a game that you can just jump into and expect to be on the pace.

Hyundai’s a fast learner, and the i30 manages to land a few body blows on the Golf, but not enough to score a knockout. Or a decision on the judge’s scorecards, come to that. The Volkswagen is just too polished, the ergonomics are just so well thought through, the dynamics of the vehicle so exquisitely honed that it makes the Hyundai appear something of an arriviste. The genius of the Golf is in being better at all the things that aren’t immediately apparent; the aspects of a car’s development that require a deep and measured understanding. The Hyundai’s faster against the clock, but drive the two cars along a challenging cross-country route and the Golf’s chubby rump disappears into the distance. It can carry more speed into corners, the brakes are easier to modulate, the transmission software that bit smarter, the suspension tuning  more nuanced, the stability control calibration better tuned to the demands of the keen driver and so on; a multitude of marginal gains that together add up to a significant and decisive advantage. There’s less rev hang, less jounce on bad roads, less pitch and heave from the body. And less, in this instance, is more. You get the picture.

Even when you’re not driving like a berserker, you’ll appreciate the Golf’s classier interior touch points, the beautifully logical dial pack, the lower hip-point in the car and the better seats. An example of Volkswagen just coming up with a better solution is the starter button. On the Golf it’s in plain sight on the centre console next to the shift lever. Think through the actions you need to make to start the car. Brake pedal in, press button, move shift lever to drive. One fluid action. 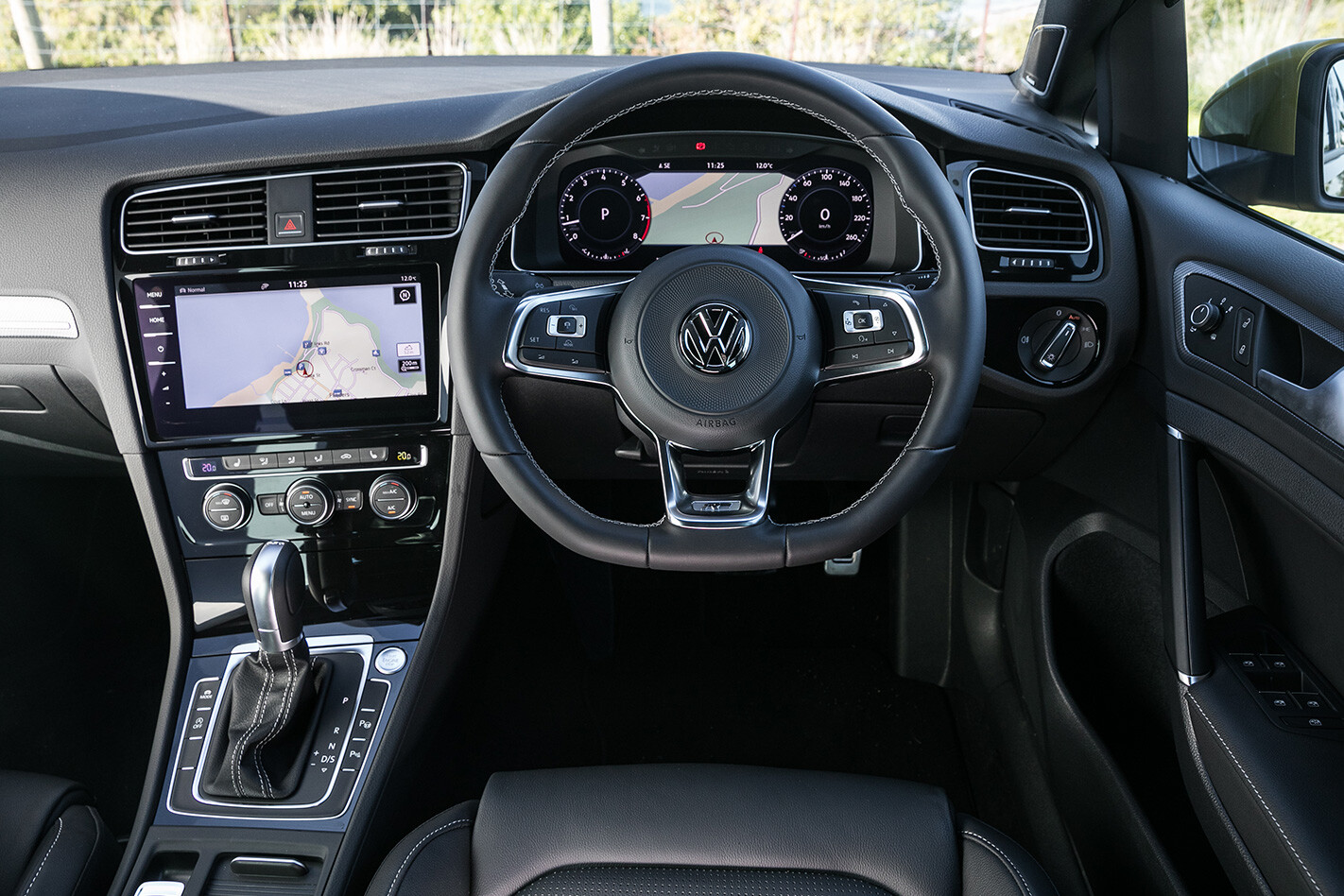 In the i30 it’s hidden behind the left-hand side of the steering wheel. You grope for the unsighted button. What do you usually have on the inside of your left wrist? A metal watch clasp. What’s one of the softest and most vulnerable parts of the entire car’s cabin? Probably the soft cover on the steering wheel. You’re going to nick it sooner or later and you’ll curse Hyundai for not being cleverer.

So while we were extremely impressed by the Hyundai, to quote an old TV series: “Come at the king, you best not miss.” The i30 SR Premium is a very accomplished warm hatch, and it’s one that we’d issue a firm “buy” recommendation for. If the warranty holds significant value for you, it’s doubtful that you’d experience too much in the way of buyers’ remorse. But the Golf is just a more cerebral thing, a car with qualities that – we trust – Wheels readers will see the value of. But you knew that already. Like I said, I’m useless at suspense. 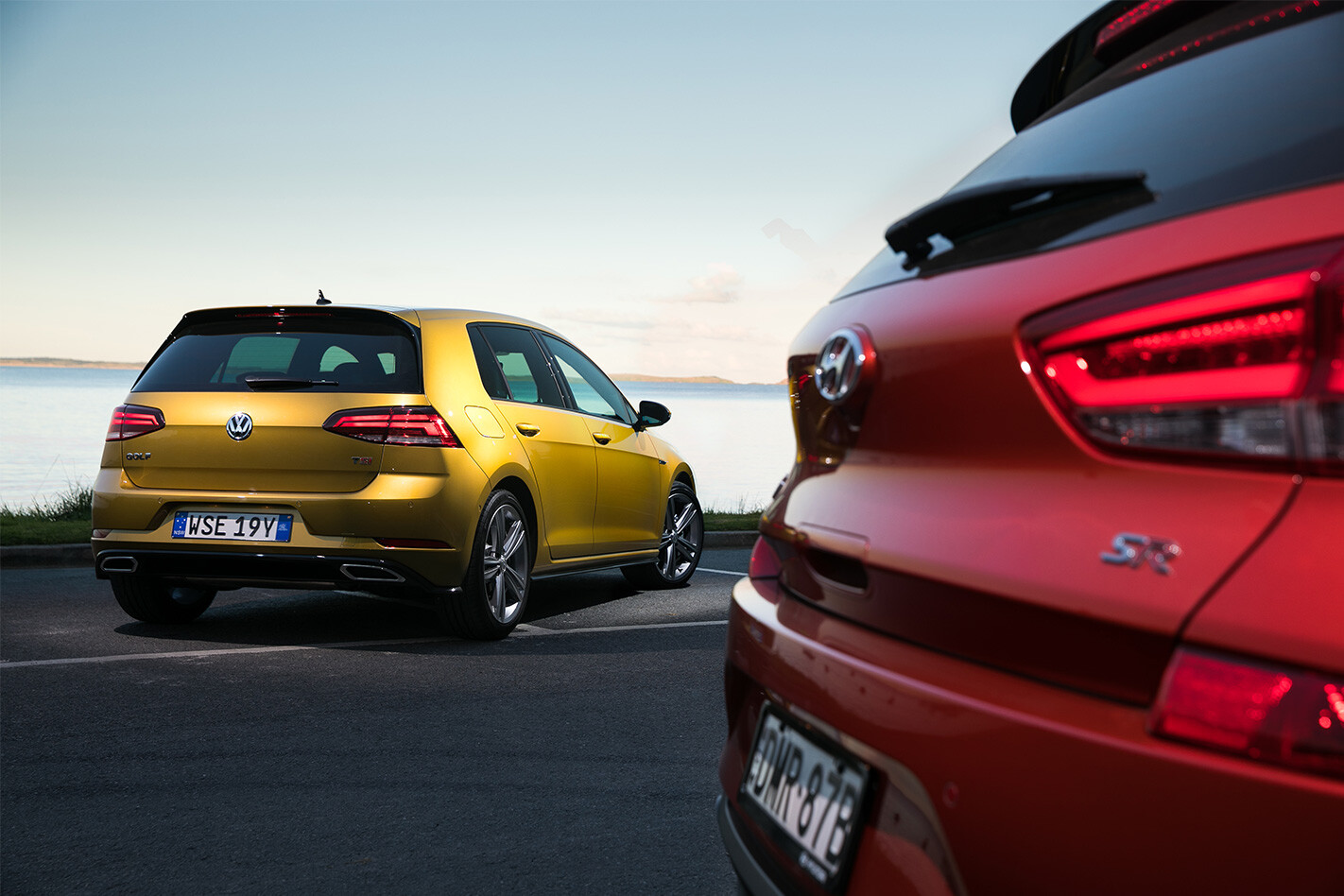