There’s nothing quite like the experience of jumping in a rare, classic vehicle, and fortunately for us here in Australia, prices of classic old four-wheel drive vehicles mean this retro experience is still relatively attainable.

This article was originally published in the July 2013 issue of 4X4 Australia.

Early LandCruisers, Patrols, Jeeps, Landies and Range Rovers can be picked up for a couple of grand, and good roadworthy examples for less than $10k. Real early stuff, such as WWII Jeeps and Series I Land Rovers, can be yours for a lot less money than buying classic cars of the same vintage, although prices are on the way up. Things are different on the other side of the Pacific, where old LandCruisers are harder to come by, not only because of their age, but compounded by the fact they were only imported to the US in very limited numbers. FJ40 Cruisers are highly sought after and while still nothing like the domestic muscle cars, they fetch big dollars from collectors.

Californian Jonathan Ward saw the growing interest in early Cruisers in the US and in 1996 he formed TLC. Tender Loving Car, Toyota Land Cruiser; call it what you want but the company set out to be a one stop shop for early Cruiser sales, service and restorations, concentrating on the legendary FJ40 but also delving in to FJ45 and later 55 and 60 Series Cruisers. After many FJ restorations, Jonathan saw that original parts were getting harder to find and collectors were still willing to pay a lot of money for retro vehicles. Toyota itself had even commissioned TLC to produce three prototype vehicles for what eventually became the modern FJ Cruiser.

“As our global reputation grew and grew, I began to work as a consultant for Toyota, and TLC began to handle special projects for Toyota, ranging from outfitting vehicles for special events to eventually being asked by Mr [Akio] Toyoda to build three running and driving prototypes of what became the 2007 Toyota FJ Cruiser. Our original prototypes paid more direct homage to the LandCruiser tradition than the new FJ Cruiser,” Jonathan says. 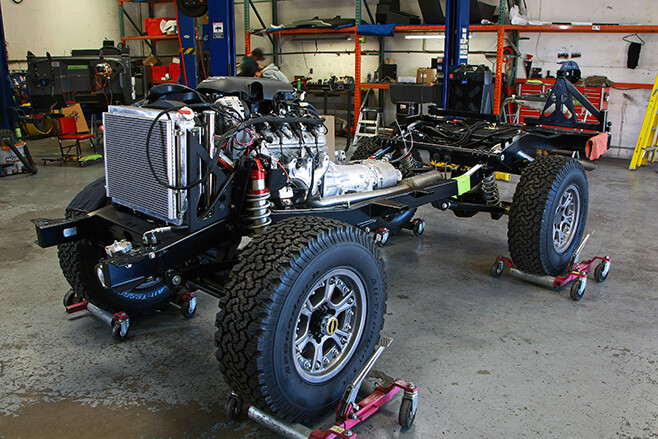 This project, and seeing how Toyota transformed it in to the FJ Cruiser, prompted Jonathan to ask himself how he would build a tribute to the original FJ and hence ICON was born. ICON builds 4X4 vehicles that pay homage to the originals but utilise modern materials, technologies and manufacturing practices to create vehicles that drive as you would expect of a modern car, yet still have that old school cool that only a classic car can provide.

ICON started with the FJ40, 45 and 43 models, but has since expanded its line to include the Jeep-inspired ICON CJ3 and Ford Bronco-inspired ICON BR series vehicles.

ICON vehicles are built to order; if you thought the price of restored original Cruisers was high, you will be gob-smacked by the price of an ICON. Depending on your specs, an ICON FJ will cost you from US$125,000 to US$195,000. They are available in short (FJ40), mid (FJ43/44) and long (FJ45) wheelbases; with petrol V8 or four-cylinder turbo-diesel engines and a range of drivetrain, trim and feature options for buyers to choose from. Anything from a leaf-sprung replica to a race-bred Baja brawler is possible, although the leaf springs are no longer offered as standard. 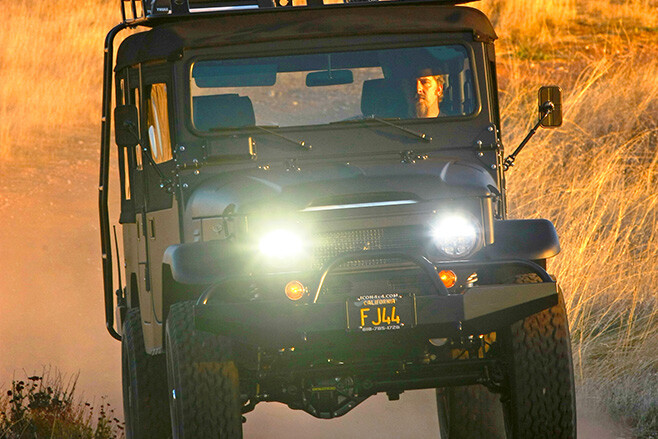 The vehicle pictured here is a bit of a phantom FJ and shows the scope of ICON’s inventiveness. Toyota never made a four-door FJ but the inquisitive minds of the crew at ICON thought it would be a cool idea.

“Over the years we looked at ways of taking the brand forward and we did a quick rendering of what a four-door would look like,” says Jonathan. “We shelved the plan while we developed the CJ range, but people kept asking for it, and this one guy persisted with it. I couldn’t talk him in to a FJ43 so I emailed him the rendering and he said ‘Yeah, that is it’ and after we sold five of them in a month, it became our newest model.” 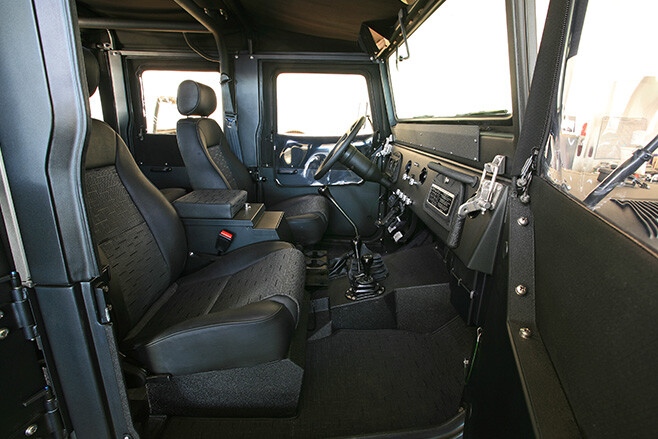 The FJ44 is similar to a four-door Jeep Wrangler in concept, although this one is set up with seating for six, in three rows of two bucket seats – just the thing for taking the family out on the tracks. The 44 rides on a 2895mm wheelbase, whereas the ICON FJ40 sits on a 2362mm wheelbase and the FJ45 ute has 2971mm between the front and rear wheels.

As all the ICON bodies are hand-made from aluminium, creating the four-door was no special task. All the panels, bar the bonnet, are 5052-H32 aluminium; the bonnet is a new steel part from Toyota. The panels are powdercoated in a special material developed for ICON, while the undersides are polyurethane coated for protection and reduced heat and vibration transfer.

It’s when you start talking hand-made body panels that you see where the money goes in one of these beauties. The chassis is specially manufactured for ICON, this time by renowned chassis shop Art Morrison. Each one is made on a jig using 2”x 4”x 0.180” mandrel-bent mild steel rails and state-of-the-art bending technology to create rigid, wrinkle-free rails. All accessory mounts are precision laser-cut and formed to exact dimensions to ICON’s specification.

Morrison helped with the suspension design as well, with a triangulated four-link used on the rear and three-link and panhard rod used under the front. Adjustable coil-over shocks are used at each corner, as are front and rear blade-style sway bars. The sway bars and lower control arms are made the same front and rear so as to be interchangeable in the field and require less spares to be carried. Diffs are a Dana 44/60 front/rear combo from Dynatrac, manufactured to ICON’s specs. ARB air lockers are one option, another is the Stop Tech brake package featuring six-spot calipers on the front and four-potters on the rear, grabbing massive custom discs. The standard brake package uses OE parts from GM over slotted and vented rotors.

ICON offers numerous powertrain options for the FJ, including two petrol V8 engines and a 2.8-litre, four-cylinder turbo-diesel that is tuned to run on biodiesel.

The intercooled turbo-diesel engine comes from International Harvester and uses a VNT to help it make 101kW at 3800rpm and 375Nm at just 1400rpm, with far better fuel economy that the V8s. Petrol V8s are the engines of choice in the US and this FJ44 runs the 5.7-litre LS V8 from GM, making 313kW at 5500rpm and 620Nm at 4500rpm. The transmission is a four-speed auto, also from GM; a five-speed manual is also available. The transfer case is the indestructible Atlas II off-road unit, with 3:1 low range as standard or ultra-low 5:1 gears for crawler work.

Like all the drivetrains offered in the ICONs, this one is designed to offer simple and reliable performance, with servicing and replacement parts easily available from regular suppliers. It works with the other modern components used in the cars to give that ‘new car’ performance and drive experience while wrapping the package up in a head-turning retro body. 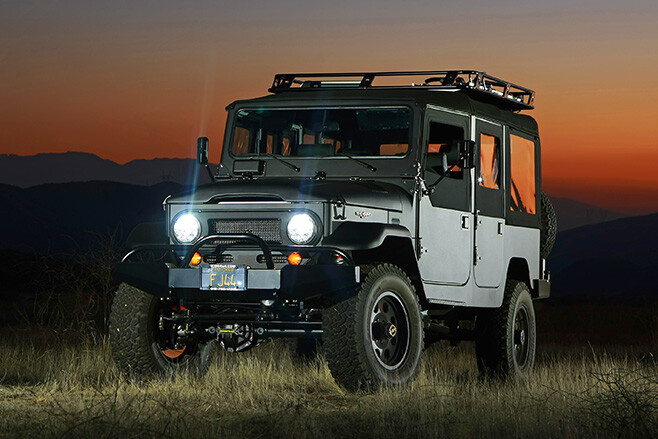 This FJ44 is even more neck-snapping – any Land Cruiser enthusiast who sees it will know that Toyota never made such a vehicle. And, on top of that, its four-door configuration makes it stand out even more from the “standard” ICON FJ.

NOT A TOYOTA FAN?

Like the idea of a classic 4x4 with a modern drivetrain but not keen on a FJ? Then maybe an ICON BR or CJ would be more to your liking.

Just like the ICON FJs, the CJ and BR feature a specifically made chassis with modern suspension and brake components, contemporary drive lines and hand-made body panels styled to replicate the classics from Jeep and Ford. They can be built to retain the full classic look or with some more modern features visible. The BR Bronco tribute is fitted with a 5.0-litre ‘Coyote’ V8 engine, as found in the latest Ford Mustang, and it is backed by a five-speed manual gearbox, Atlas II transfer case and Dynatrac Dana diffs.

The CJ stays true to the original with a small 4-cylinder power plant but it’s a modern 2.4-litre ECOTEC petrol engine from General Motors. Again backed by a five-speed manual gearbox but with a NP transfer case and Rubicon spec Dana axles. Take your pick of either a Toyota, Ford or Jeep tribute from ICON and you’re sure to have a unique vehicle in Australia. Jonathan Ward says there is no reason an ICON can’t be made in right-hand drive configuration and the possibilities are only limited by your budget and imagination.

Local road registration would be another story though.