NISSAN’S Y62 Patrol might have polarised the Patrol faithful when it replaced the venerable GU in Australia back in 2013, but it has steadily built up a strong following among four-wheel drivers as more and better equipment has become available to tweak the big wagon to our needs.

While many lament to the lack of a diesel engine and live axles, there’s no disputing the Y62’s VK56 petrol V8 engine is one of the best mills on the market and rewards the driver with awesome performance and a killer V8 howl.

When we asked long-time live-axle Patrol owner Anthony Barr what he loves most about his Y62 he said with a grin, “The noise and the power”, adding the ground clearance afforded by the independent suspension at each corner. Turn the sound up when viewing the video of the Patrol and you’ll understand what he’s smiling about. 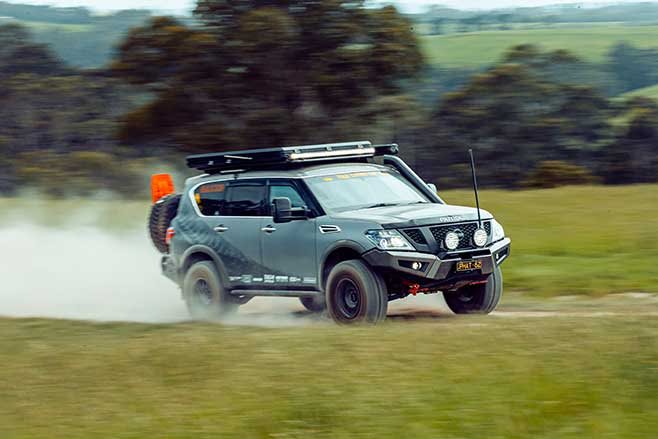 Anthony has had what he says are ‘countless’ GQ and GU Patrols over the years but has been sold on the Y62 from the time they came out. It was only more recently that he was in the position to get one.

“I was a trainee sales person for Nissan back in 2013 when the big boss owned one,” Anthony recalls. “He once told me to go do a fuel run in it and from that day I wanted one. Then once I found out how capable these things could be it was all I needed. 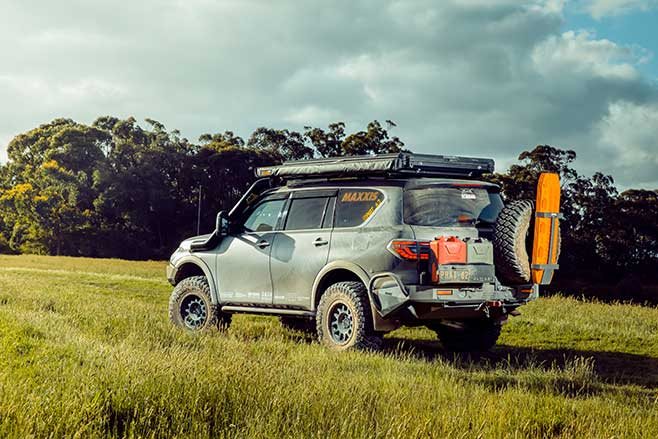 That budget meant a used car and it took Anthony a while to find the specific model he wanted. He was chasing an STL spec model without the Hydraulic Body Motion Control (HBMC) system so it would be easier to lift and modify. He finally found one of the original 2013 models and it didn’t take long for the build to begin. “It had some bar work and a lift, but all that has changed now,” he said of his latest Patrol.

“It’s built for tough touring. I can point it up any track, drive 1000km a day in comfort, and have a quick and simple camp set up and packed down within minutes.”

Even though the Y62 has been available in Australia for seven years, and 10 years internationally, there are still relatively few shops who know how to build them right. Melbourne’s On Track 4x4 built its business on older Patrols but have become the go-to workshop for 62s in more recent times.

Some of the earliest upgrades to come from Ontrack for the Y62 included a suspension lift for the fully independent suspension and addressing the GVM limit. The On Track lift raises a Patrol 50mm, although Anthony’s Patrol goes a bit further utilising adjustable remote reservoir coil-overs from Radflo. 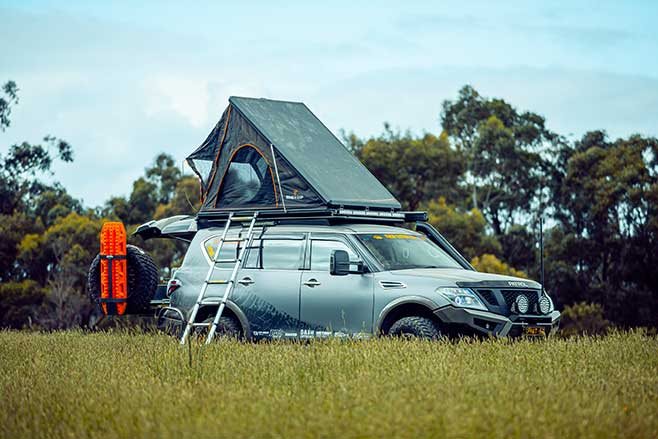 Increasing the GVM required more work and the capacity of the rear control arms was an issue. On Track designed and manufactures billet alloy replacement arms to increase the rating of the rear and, along with replacement front lower control arms, this ups the GVM from 3500kg to 4085kg. Of course Phat 62 has these fitted as well. Anthony does a lot of towing with the Patrol and the rear suspension is bolstered with a set of bags from Airbag Man for such occasions. 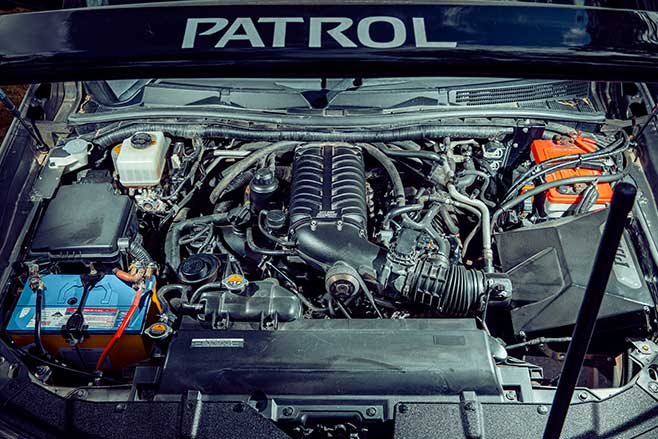 Being set up as a touring rig there is a lot of kit in Anthony’s Patrol so it needed that GVM upgrade. The cargo area is set up with a custom drawer system, Clearview drop-down fridge slide and cage, a pair of Kickass 120amp/h AGM batteries, a 1500W inverter, ARB dual-pump air compressor and a 12-volt travel oven. Battery management is handled with a Redarc BCDC unit and Victron Bluetooth monitor.

The Pioneer and Kicker amplifiers are also mounted on the back of the drawers and they drive six Kicker speakers and a subwoofer to boost the audio system.

Speaking of boost, there’s more of that producing incredible sounds under the bonnet. A Harrop supercharger kit ups the ante of the V8. It’s deep breathing is aided by a 5-inch PDC snorkel and airbox on the intake side, with Pacemaker headers and Manta exhaust system getting rid of the combustion by-products. A custom tune was done by HPF to make the most of the hardware. Keeping fuel up to the blown V8 on long drives is a Long Range Automotive 140-litre second fuel tank which is in addition to the factory 140-litres carried by the Nissan. 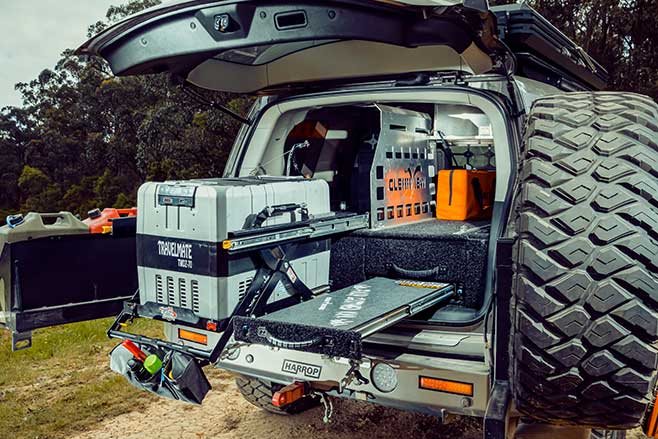 Another company to take on gear for and building Y62 Patrols is Dash Offroad, and you’ll see one of their Predator front bars on the front of this rig. The bar conceals a Runva 13XP winch and mounts a pair of Stedi lights. Additional lighting upgrades come with the custom headlamp replacements and the Baja Designs light bar up on the rack.

Also up top are a Motop roof tent and 23Zero awning; just the things for those quick set-up campsites.

Another smaller Melbourne company doing great things for 4x4s is Raslarr Engineering and it made the rock rails and rear bar for the Patrol. The rear bar has swing-outs for the spare wheel and jerrycan holder, plus this one has extra protection for the rear quarters afforded by the bars on the sides. 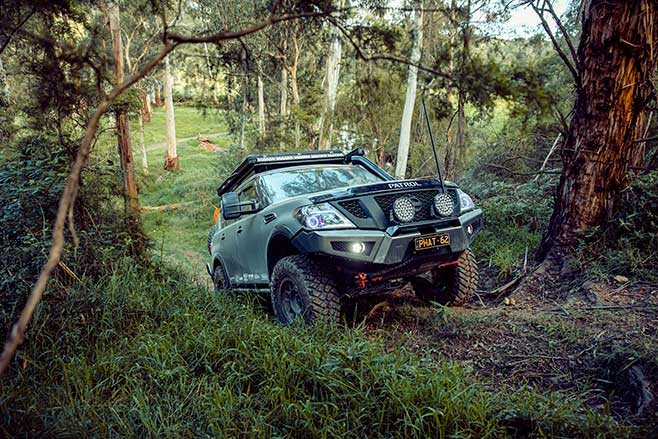 With improved engine performance, suspension, wheel tyres, equipment and protection, Anthony has created what could be his ultimate Patrol but he does miss the versatility of his old dual-cab GU.

“I’m pretty happy with it as it is,” he said, “but if I did damage the back of it I’d probably cut it and make it a dual-cab. But right now it’s pretty much done and in my eyes, that’s the ultimate touring vehicle.” 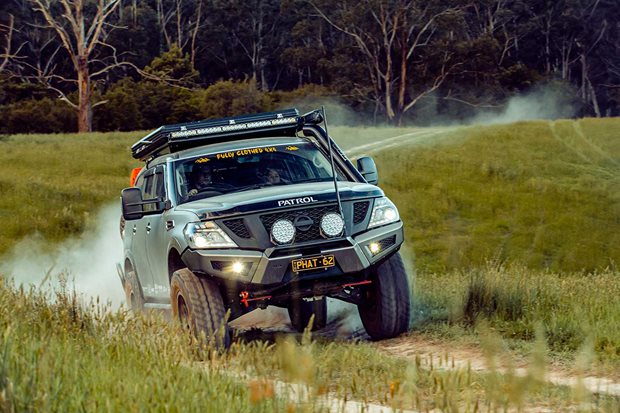 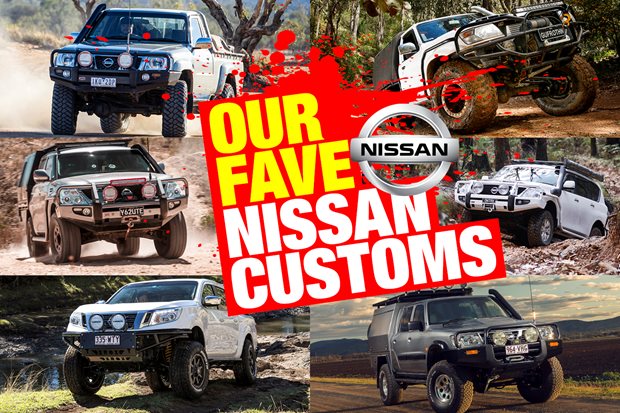