Maranello, Monday morning. The weather forecast predicts a 99 per cent chance of rain.

Heavy rain. Though the atmosphere among the visitors – snapper, scribbler, PR man – is decidely chilly, the actual temperature is even colder, the gauge reading a mere 7.5C. It's difficult to think of less appropriate conditions for tackling Fiorano, Ferrari's test track, in the most ferocious Prancing Horse ever built.

But surely LaFerrari was engineered for such extreme conditions? Surely the ESC can cope, surely the track will dry when it stops raining later in the day. Surely. But right now, we must wait.

At last, the electric roller door opens and two LED headlights project into the gloom outside. Ferrari's chief test driver, Raffaele de Simone, points at me, then at the passenger seat. Yessir, I'm coming, but give me two minutes to adjust the four-point harness. 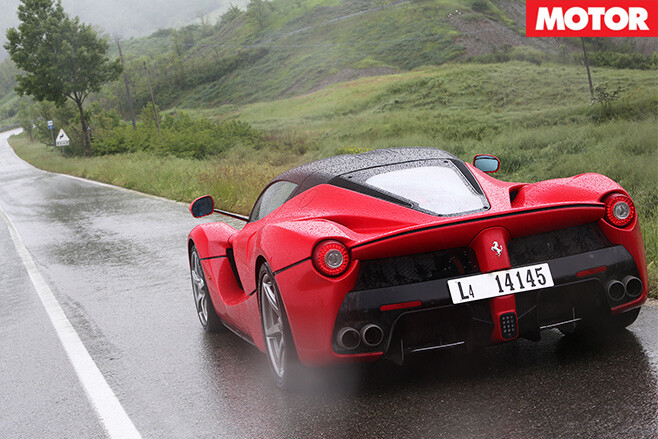 With a stab at the red starter button, the man who replaced the legendary Dario Benuzzi stirs 12 electrically-assisted cylinders into life. A brief smile, a quick pull at the upshift paddle and we're off like greased lightning, but the circuit feels more like grease than lightning, so the wiry wheelman decides to take it easy: “Aquaplaning everywhere! I suggest you follow a slightly different line. And be careful with the manettino...”

Now it's my turn, but for a moment excitement turns to despair as it becomes apparent the one-size-fits-all seat carved into the carbonfibre passenger cell fits all but me (Georg stands well over two metres tall – Ed).

The only adjustable element is the pedal box, and it doesn't slide far enough forward to accommodate my giraffe-like legs. A friendly mechanic removes the seat cushion and then the backrest. I feel like an idiot, but at least I can reach the pedals now, with the right shin chafing the knee bolster and the left thigh clasped solid in a vicelike position. With the seat in place, LaFerrari's centre of gravity is a ground-hugging 375mm, 65mm lower than the 458 with which it shares its wheelbase. Pushing the driving position 60mm closer to the road completely alters the field of vision and with it the perception of the turf ahead.

The all-new, full-width technicolour instrument panel appears to be almost at the same level as a head-up display, the quartic steering wheel sits unexpectedly close to the chest, and the scalp needs to find and occupy the only sweet spot which clears the massive gullwing door. Thanks to the deep cutaways in the sills, though, entry and exit are managed with something approaching grace.

During every Ferrari launch I have attended, they routinely call you back to the pits after five laps. One warm-up lap, three fast laps, one cool-down lap. Then the crew swarm out, adjust tyre pressures, check the brake temperature, clean the windscreen, interview the driver. Today, everything is different. There is more time to adjust. To the car, the conditions, the mix of fear and anticipation inside. If only there was more room to move. The cockpit is familiar, but also not, like seeing a close friend from school after two or three decades. The steering wheel, with the integrated LED rev counter, looks and feels odd, with the ratio a whopping 45 per cent faster than the Enzo.

Opposite lock is reduced to a token gesture, especially in the rain when there is not enough front-end grip to establish a reassuring handling balance. The slim shift paddles must be the longest in the business, made possible thanks to the relocation of all the major controls from column stalks to the front of the steering wheel. 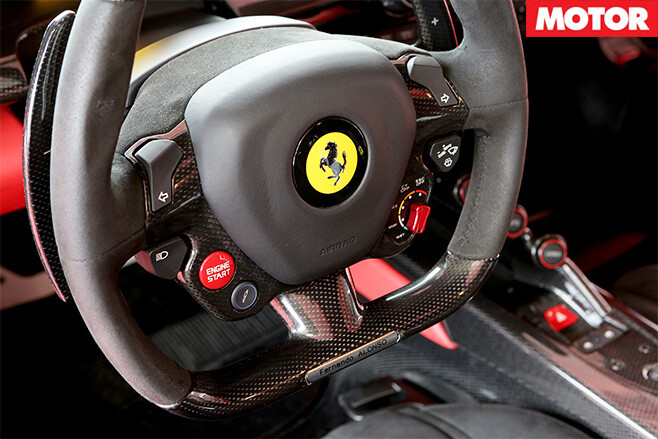 A 10,000rpm tachometer takes pride of place in the redesigned instrument panel, supplemented by a horizontal green ribbon that shows the level of available electrical charge and a circular energy-flow display that lights up segments when the drivetrain is boosting, fast charging, pre-loading and regenerating through the brakes or via the e-differential.

The first five laps are embarrassingly slow. I brake too early, turn in too early, step on the gas too late. Despite leaving the manettino in its default Sport setting, feeding 708kW and "in excess of 900Nm" (Ferrari press kits have never been particularly specific) through just the rear tyres creates drastic traction difficulties. After all, the all-wheel drive Bugatti Veyron had just 28 more kilowatts.

The next five laps are more coherent, but while the specially-made 345/30 ZR20 Pirellis warm up quickly, the fronts struggle for grip, understeer increasing with each lap. I pit and ask for advice. 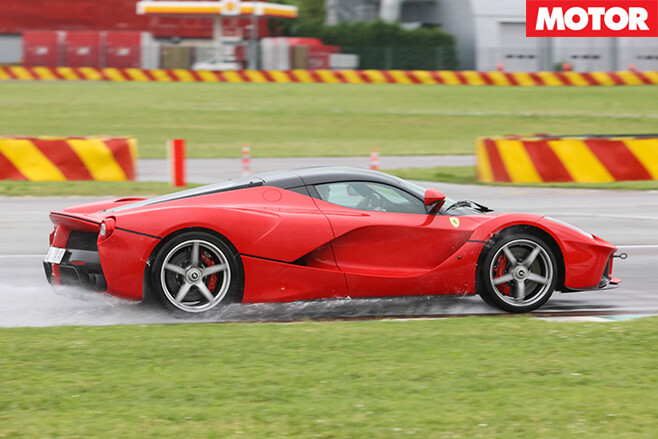 “You need to zig-zag down the straight like the F1 boys to build up grip”, suggests Raffaele. “And you should brake late and hard. In addition, we are going to take a couple of psi out of the front tyres.”

Three laps later, the character of the car has changed completely. With the tyre temperature display now showing four green symbols, the bespoke P Zeros are beginning to conquer the moisture, so at the end of lap 15 I venture into Race. Down the straight, I dare to push the mighty 6.3-litre V12 to its 9250rpm limiter for the first time in third and fourth gear before braking, again too early, for the right-hander that follows.

The incredible powertrain utterly dominates the experience. While you're never consciously aware of its operation, the 120kW/270Nm electric motor is always providing assistance, beefing up bottom-end torque before letting the 588kW V12 have its head as the revs soar. Unlike its two main rivals in the hypercar stratosphere, the McLaren P1 and Porsche 918, LaFerrari cannot be plugged in and has no electric-only mode. This doesn't make it any less clever, it simply means Maranello's mad scientists had a different set of priorities.

The hybrid system exists exclusively to boost performance, which meant weight was a key factor. The entire hybrid system, consisting of a high-voltage generator that replaces the alternator, 2.3kWh lithium-ion battery pack, dual-clutch transmission hooked up to the electric motor, cooling system and the power electronics complete with inverters and converters, weighs just 146kg.

Like the 918, LaFerrari recuperates energy under brakes, but, unlike the Porsche, from the rear wheels only to avoid the cost, complexity and weight associated with an electric front-wheel drive system. The resultant 1430kg kerb weight undercuts the P1 by 20kg and the Veyron by an incredible 450kg. Translate this into power-to-weight and it's clear which car holds the high ground. LaFerrari's 495kW/tonne overshadows the P1's 464kW/tonne and relegates the Veyron's 391kW/tonne, thought unsurpassable a decade ago, to mere also-ran status.

With the numbers in mind and a reputation to uphold – both mine and Maranello's – it's time to get our act together and put this beast to the real test. This is easier said than done. The approach to turn one, where the pros hit an indicated 270km/h, is a palm-moistening 230km/h even in the wet.

With an extra helping of courage, through the following corners LaFerrari slips into ground effect mode, sucking itself to the tarmac like Brabham's infamous 'fan car'. The secret behind this amazing aerodynamic stability is a set of motorised flaps and air dams which automatically change the balance from minimum drag resistance to maximum downforce. There are two adjustable wings, a small one incorporated in the nose cone and a large one on the car's trailing edge.

The supporting act consists of five underfloor flaps – three in the front and two in the rear – which modulate the air flow for enhanced cornering grip or maximum velocity. At 200km/h, the aero kit increases vertical load by 360kg.

It takes a while to get used to these suction-cup talents, but after 20 or 25 laps I am slowly beginning to get the hang of it. Geared for total efficiency with no further input required, this is a very special, if somewhat eerie, driver assistance system.

As always, trust builds confidence, confidence breeds courage, and courage is required to explore the limits of adhesion and ability. Although it's still pelting down, LaFerrari and I now and then consciously overstep the mark. Even in comparison to the 458, the steering is ultra-quick, changing direction so promptly the term oversteer gains a whole new meaning. Everything this car does seems to happen in warp speed. Throttle response is claimed to be twice as quick as the Enzo, hard acceleration making LaFerrari jolt forward as if forced by some invisible hand. Only the very best from McLaren, Bugatti or Koenigsegg even come close.

Fiorano, late Monday afternoon. It's still raining, the sombre light looks suspiciously like early evening, and the men in their red anoraks are about to call it a day. After lunch, we complete seven more laps before disappearing for a three-hour blast through the Maranello hinterland, becoming a mere red streak through the lush green hills from Vignola to Pavullo and back. Despite the foul weather, fascination always loomed large. While those sudden bursts of twitchiness burn small holes in the seat of the pants, tasting the awesome oomph planted the desire for more action, more noise, more physical satisfaction.

Can we please come back on a sunny day? Fat chance. All 499 LaFerraris are long spoken for, despite the steep asking price of €1,190,000 ($1.77m). The even more extreme FXXK version, of which only 30 units will be made, will not be road-legal, but perhaps we can get a go in the Spider, which is bound to be even more exclusive and expensive than our tight-fitting, fixed-head plaything.

Living quarters
Ultra-compact passenger cell allowed the bodywork to be shrink-wrapped around it. This created both a narrow glasshouse and the opportunity to use the bodywork to influence airflow. Access issues solved by creating deep cutaways in the car's sills.

Spreading the load
LaFerrari's centre of gravity is an incredible 375mm, 65mm lower than a 458 and 75mm lower than a Toyota 86. The HY-KERS system places a crucial role in this, lowering the powertrain by 35mm, as does dispensing with conventional seats. It's the key to LaFerrari's incredible stability. Diffusing the situation
LaFerrari has no conventional wings. Rather, its downforce is produced by a series of hidden motorised flaps that automatically change at speed. There is one hidden in the nose cone, one on the car's trailing edge and five under the floor. Together, they produce 360kg of downforce at 200km/h. 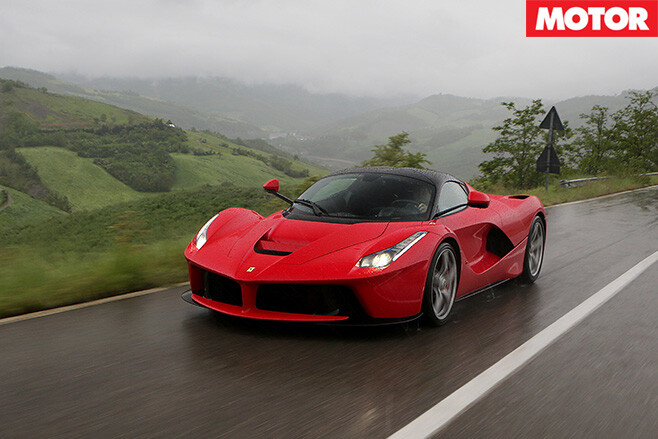 Horses for courses
Modified 6.3-litre V12 develops 588kW/700Nm, while 120kW/270Nm electric motor, developed in conjunction with Magnetti Marelli, bolts onto the back of the gearbox. Electric motor boosts low-end torque, allowing the internal combustion engine (ICE) to be tuned for top-end power.