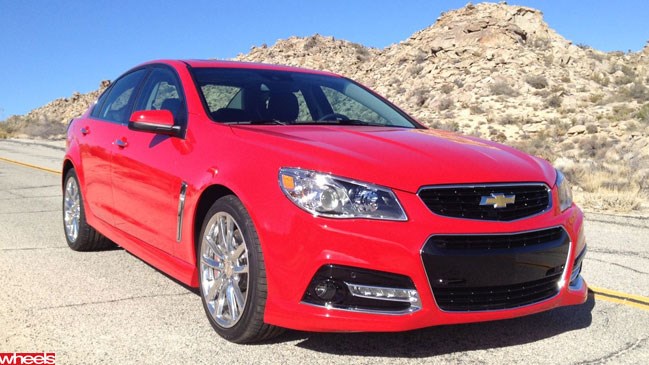 You only need to start the Chevrolet SS to realise this is not just a Commodore with a bow-tie badge on the nose.

I'm in Palm Springs, in the desert country of California for the US launch of the new Chevrolet SS, the first of its kind in 16 years.

You might recognise it as Commodore SS, but you would be wrong. The SS sold as a Chevrolet in the US is a cross between an Australian VF SS-V Redline and an HSV Clubsport. It also has a few extras that aren't available in Australia, so you best not read on if you own an Australian SS because it could just make you angry.

You notice one big difference when you press the Start button. It fires up with a roar that instantly gives away that this even louder than its HSV engine donor. This is a result of more lenient drive-by noise test levels used the US.

Then there is the price. The American Chev SS costs a smidge under $50,000 in Aussie money at the current exchange rate. That is about $4000 less than the SS-V Redline it is based on, even though it has the gruntier LS3 engine under the bonnet.

The American journos certainly seem impressed, with Car and Driver giving the SS a clear win in a scrap with its nearest competitor, the Dodge Charger SRT. Motor Week journalist Benjamin Davis agreed the SS is a brilliant car, but points out that the price could limit its appeal.

But no-one thinks Chevrolet will have any problem selling all the cars it plans to source from Holden in Adelaide, although that number is unlikely to exceed 5000 cars.

The biggest problem with higher numbers is the CAFE fleet averaging rules, which set an average fuel economy target for a brand to hit in order to avoid fines. The SS is V8-only and hurts Chevrolet's CAFE average more than the Camaro, which is V6 and V8. So Chevrolet may actually throttle back on SS orders if it needs to. American consumers are a fickle bunch, but it is impossible to imagine Chevrolet will have trouble selling 5000 SS cars every year. I say this with authority after a three-hour blast in the mountains outside of Palm Springs.

The SS retains the brilliant agility, stability and road-holding of its Australian cousin. Chevrolet has resisted the American trait of fitting spongy springs to big sedans and the result is a big rear-drive car with cornering capability right up there with Camaro and even the Corvette.

If anything, the ride is a little harsh on some of the terribly maintained roads in some parts of Palm Springs, especially at lower speeds, but the SS is happy on the better surfaced roads up in the hills.

The 310kW LS3 V8 under the bonnet means the SS can rocket between corners. This is a little less powerful than the 317kW Clubsport because it runs a different induction and exhaust system.

Unlike Aussie SS cars, the Chevrolet is only available with an automatic; there is no manual. But before you get too smug, let me mention that American SS models get flappy gear change paddles on the steering wheels. These aren't available on any Holdens or HSVs; not even the range-topping GTS. There are some other thing the Yanks get that we don't, including a shark fin antenna and a knee airbag, but that latter is only there because some Americans are too stupid to wear a seatbelt.

Even after this first brief experience, it's clear the Chevrolet SS is a damn impressive car that shows how good Aussie engineering can be. 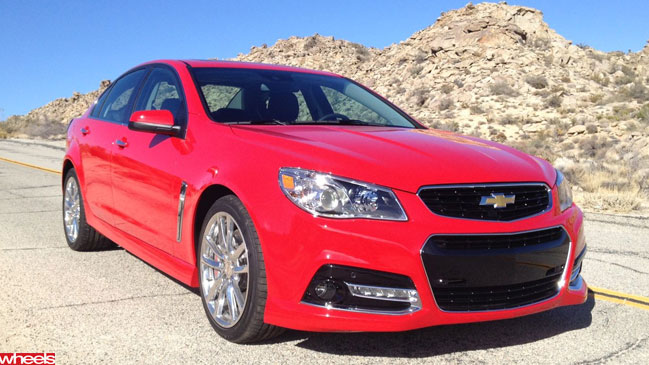 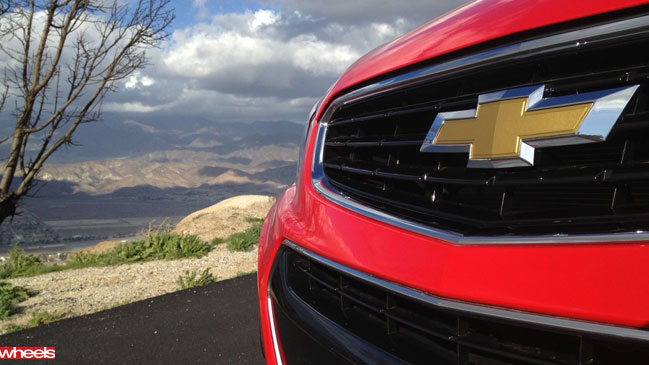