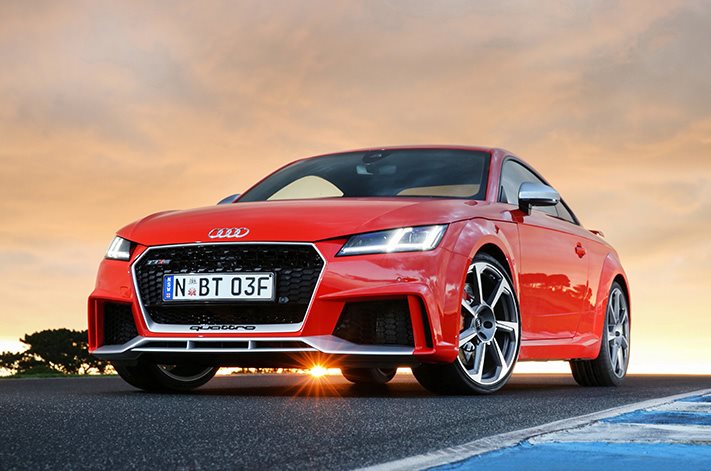 The previous-generation TT RS looked great on paper, but one-dimensional, point-and-squirt handling meant it wasn’t a car to steal your heart. We want to know if the new version translates better on Aussie roads (and track.)

The TT RS sets out to seduce with stunning exterior design, a sublime interior, and class-leading performance. It mostly succeeds, although purists may crave a little more interaction and adjustability. 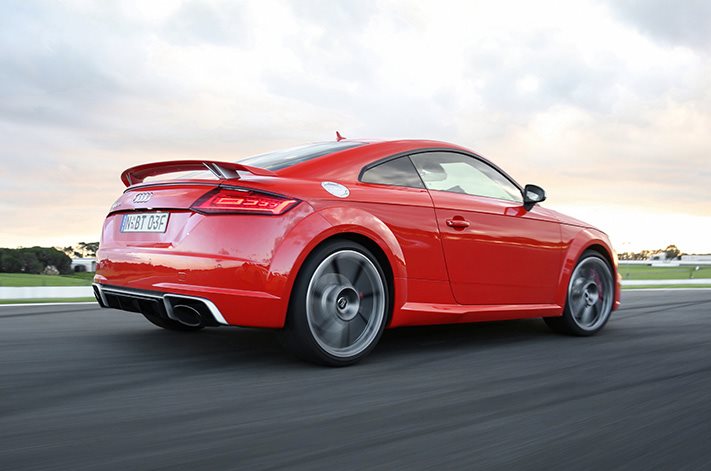 MINUS: Ultra-firm ride with dampers in dynamic mode; not as throttle adjustable as rear-drive rivals

Nostalgia, according to the old adage, just ain’t what it used to be. But that’s no reason for us not to extend a nostalgic rearward glance at Audi’s history with the in-line five-cylinder engine, given that it now arrives in freshly rejuvenated form here in the second-generation TT RS.

Fact is, it’s the turbo five-pot that really defines the RS variant of Audi’s now-iconic coupe, and the moment you hear its raspy, hacking crackle on start-up, you realise it provides the pivotal point of difference between this flagship variant and the ($37K cheaper) turbo-four TT S. 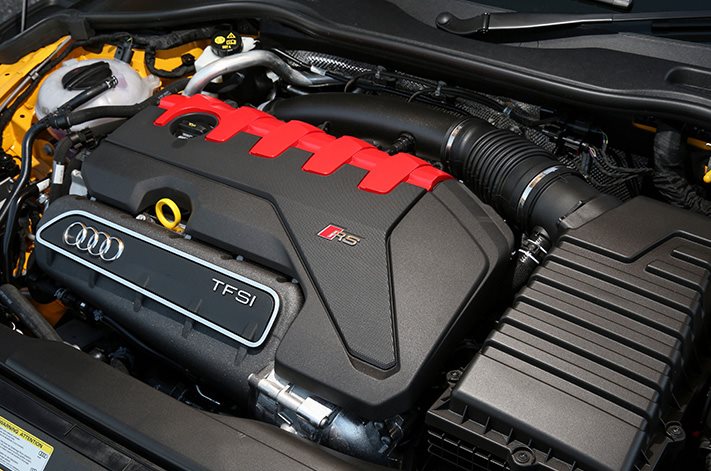 Think Audi five-pot and your mind probably flicks straight back the Ur-Quattro coupe, either in road-going homologation form in 1980, or maybe the snarling, flame-spitting Group B rally monster of the early ’80s, being flung through parting waves of mental fans by Walter Rohrl, Hannu Mikkola or Stig Blomqvist.

But let’s not forget the Audi 90 quattro IMSA GTO of the late ’80s, bristling with pumped arches and slamming around 530kW to all four corners. Or the RS2 of ’94, with its Porsche co-development collaboration.

It helps to buy into the five-pot history at least a little, because the TT RS really is defined by this new-gen engine. It retains the architecture and capacity of the previous-gen, but is lighter, spins more freely, and improves both outputs and efficiency. The weight cut comes with the use of aluminium for the block (replacing cast iron) and additions such as the magnesium sump, which collectively shave 26kg.

Its peak power looks pretty damn generous at a Cayman S-clobbering 294kW, but perhaps more impressive is the plateau it manages to sustain, from 5850rpm, and hanging on all the way to 7000rpm. Real-world upshot is that this is a turbo engine that digs in early – peak torque of 480Nm is there from 1700rpm – but still has an ultra-eager top-end, rather than a slightly anti-climactic six-grand breathlessness.

The initial bark on start-up has an almost junior Lamborghini flamboyance to it, which is probably appropriate, given the engine is precisely half of the 4960cc V10 that powered the original Gallardo, right down to identical bore and stroke.

Throttle tip-in and low-speed refinement of the revised, lighter seven-speed dual-clutch gearbox is exceptionally well mannered; not quite as seamless as a torque- converter auto, but not far short. Launch control is there if you feel inclined, and is integral to the claimed 3.7sec 0-100km/h time. 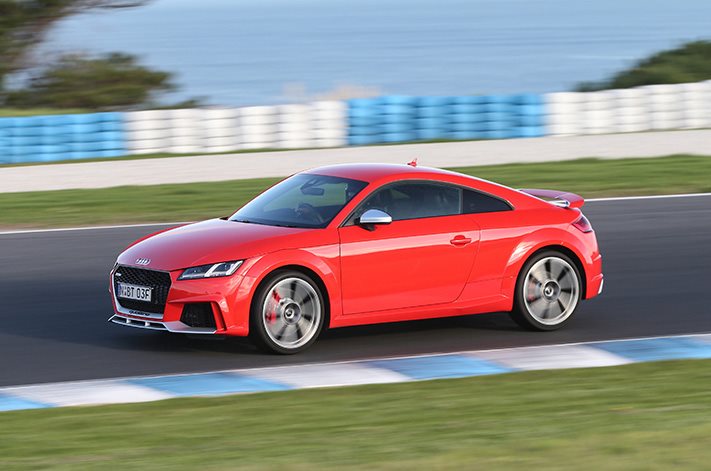 A further nod to the harder sports focus is that fact it will stutter hard up against the 7200rpm limiter when the shifter is pulled over into manual mode, but fact is the sports calibration is sufficiently aggressive to make manual paddle use an involvement option rather than a necessity unless you’re on track.

Speaking of which … we sampled both Coupe and Roadster on the sublime Phillip Island GP circuit, and came away impressed with both variants’ pace, power-down capability, planted fast-sweeper composure and stopping power.

However, if you want the ultimate in fingertip finesse and engaged rear-end; if you live for power oversteer and hip-pivoting samba, then the TT RS may not be the perfect fit. The steering is quick at 2.0 turns lock to lock, and has reassuring weight even in the lighter of its two modes. But while it’s way better than the synthesised feel of the first-gen TT RS, it’s still not an especially detailed or nuanced communicator.

So while there’s abundant front-end purchase, you’ll sense the slip angle more through the seat of the pants than the wheel. Barrel in hot and lift, and there is the first inclination of the back end wanting to help tighten the line, but the ESC, even in dynamic mode, quickly moves to quell it, and keeps the throttle cut for a moment longer than seems necessary.

So the TT RS becomes a tool that requires a very precise touch, rather than encouraging too much creative exploration of line and angle. At least you can get on the throttle nice and early, and the Haldex-type all-wheel-drive system does an excellent job of taking the chassis from a front-driver when lightly driven to a super-tractive all-paw bolter when you’re up it. 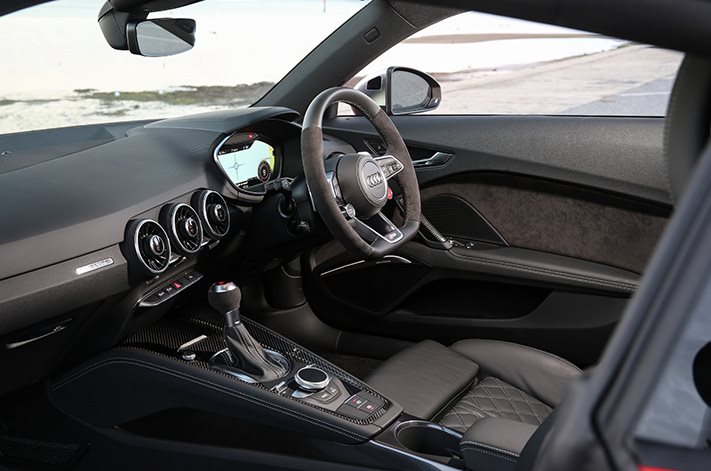 The slightly austere on-track demeanour is much less of an issue when there are advisory speed signs rather than ripple strips, naturally. On a fast backroad you’ll have a greater appreciation for the fine body control and almost foolproof ability to carve very quickly. The chassis is 10mm lower and runs a firmer spring and adaptive damper set-up that the TT S, meaning you’ll want to keep it in the standard setting, rather than dynamic, if you value your fillings and vertebrae.

Fortunately the Drive Select allows discrete control over all the key parameters, and creating an Individual configuration that teams regular steering and suspension settings with sports powertrain and quattro, along with an open exhaust flap, quickly became our road set-up of choice. The standard 380mm steel front discs, clamped by massive eight-piston calipers, copped track abuse with little complaint, so are all you’ll ever need on the road.

Same-size carbon-ceramic front rotors are on the options list for $8900 if your hip pocket runs as deep as your late braking. All of which may do little to dissuade enthusiasts from lusting after a Porsche Cayman S, but the flipside is not quite so clear cut. The Audi makes a stronger case now on both cylinder count, engine outputs, and arguably design elements. The TT RS is a stunning looking car, and its interior, with RS-specific seats and wheel, oozes a style and seduction factor the Porsche can’t match.

As for value, Audi points to a generous helping of now-standard equipment that equates to a $10K increase in added value over the old TT RS Plus, for a base price that’s a few grand cheaper than that car.

So ... faster, better, cheaper, and now with a soft-top Roadster option.  No need for a nostalgic yearning for the ‘good old days’ then.