The Audi RS4 Avant is the definitive Audi performance car.

If you don’t believe that, ask yourself what rivals it has. It's hard to think of another manufacturer that delivers such multitalented, all-wheel drive performance wagon, and the latest B9 version looks to hammer home Ingolstadt’s home-field advantage. Yes, there are other fast load-luggers, but none with the RS4's freakish bandwidth.

The Audi RS4 Avant’s blend of savage pace, all-wheel drive grip, everyday utility and sophistication of finish has proven a winning combination since the very first car arrived in 1999. Its genesis can, in fact, be traced even further back, to the 1994 Audi RS2 Avant, a car that set the template for this genre of super wagon. Having already sampled its near cousin, the Audi RS5 coupe, we were curious to see whether the RS4 Avant could parlay that car’s blend of talents into an even more cohesive proposition. The latest car reverts to the turbocharged V6 configuration of the original RS4, but are we about to get all nostalgic for the outgoing atmo V8?

If ever you needed an eloquent argument for the benefits of forced induction, this latest RS4 Avant is it. It’s the biggest step-change in the model’s history yet still delivers everything you’d expect from a ballistic wagon. 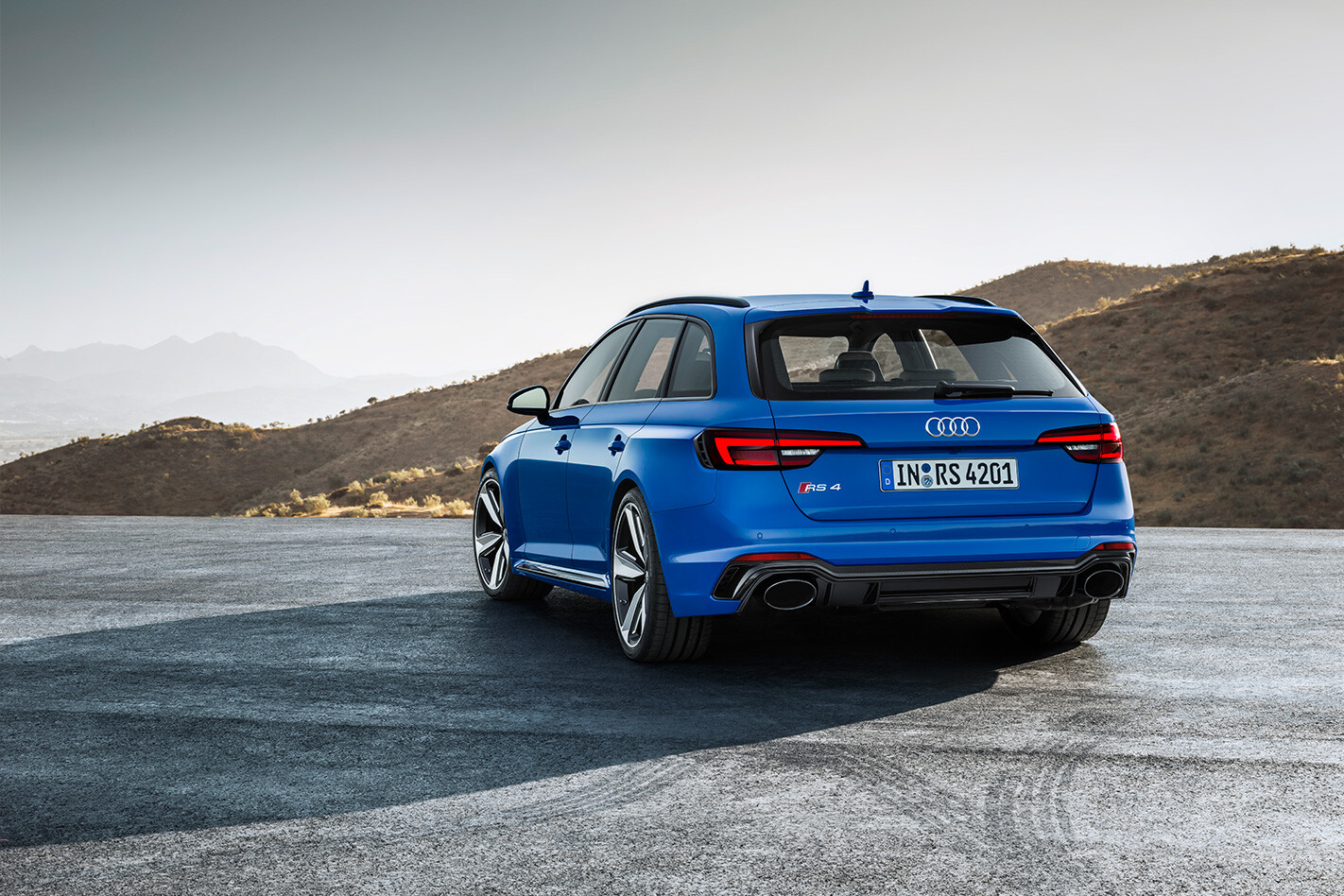 WE’VE BECOME fat on torque, gorging ourselves on great dripping gobs of it. Once you sample the addictively brawny character of the RS4 Avant’s turbocharged V6, you’ll wonder how you ever managed without 600Nm of the stuff. Before we go any further with that line of reasoning, let’s throw on the picks and pull it into context. The flagship of Audi’s sportscar portfolio, the R8 V10, only hawks up 540Nm.

And it’s torque that transforms this latest RS4. When compared to the original B5-gen RS4 from 1999, power has risen by 18 percent, while torque has stepped up by twice that amount, the latest car developing better than 36 percent more. The old 20th century 2.7-litre V6 RS4 made more Newton metres than the last normally-aspirated V8 model, a car which would develop 430Nm when wrung out between 4000 and 6000rpm. This latest B9 model generates virtually that much at idle. This huge musculature coupled with a smart all-wheel drive system means the RS4 is devastatingly quick out of the traps. Audi quotes a 0-100km/h time of 4.1 seconds. That’s laughably conservative. Your mum could get a three point something out of the RS4. In normal driving, it’s impossible to catch the engine off-boost. Set into sports mode, the transmission is the force multiplier that weaponises that torque. Plant your foot and before the pedal’s reached the bottom of its travel, the RS4’s eight-speed ZF torque-converter auto has dropped a couple of gears and the scenery’s leaping through the windscreen with the same sort of mildly unnerving velocity as when you fast-forward through the commercial breaks at 16x on your smart TV.

You won’t need savant-like recall to cast your mind back to a recent comparison Wheels ran with the mechanically-similar RS5 and while we were hugely impressed by the car’s pace and composure, it seemed to be a little shy of the charisma and involvement we expect of a top-end sports coupe. And yet the RS4 appears to be judged by a more lenient set of criteria. Do fast estates get a pass on the sort of excitement we want built into coupes? To a certain extent, yes. A five-door wagon with a 505-litre boot requires a subtly different skillset. Whereas a superhero coupe needs to don the cape all the time, a wagon’s preferable with a little more Clark Kent to its personality. 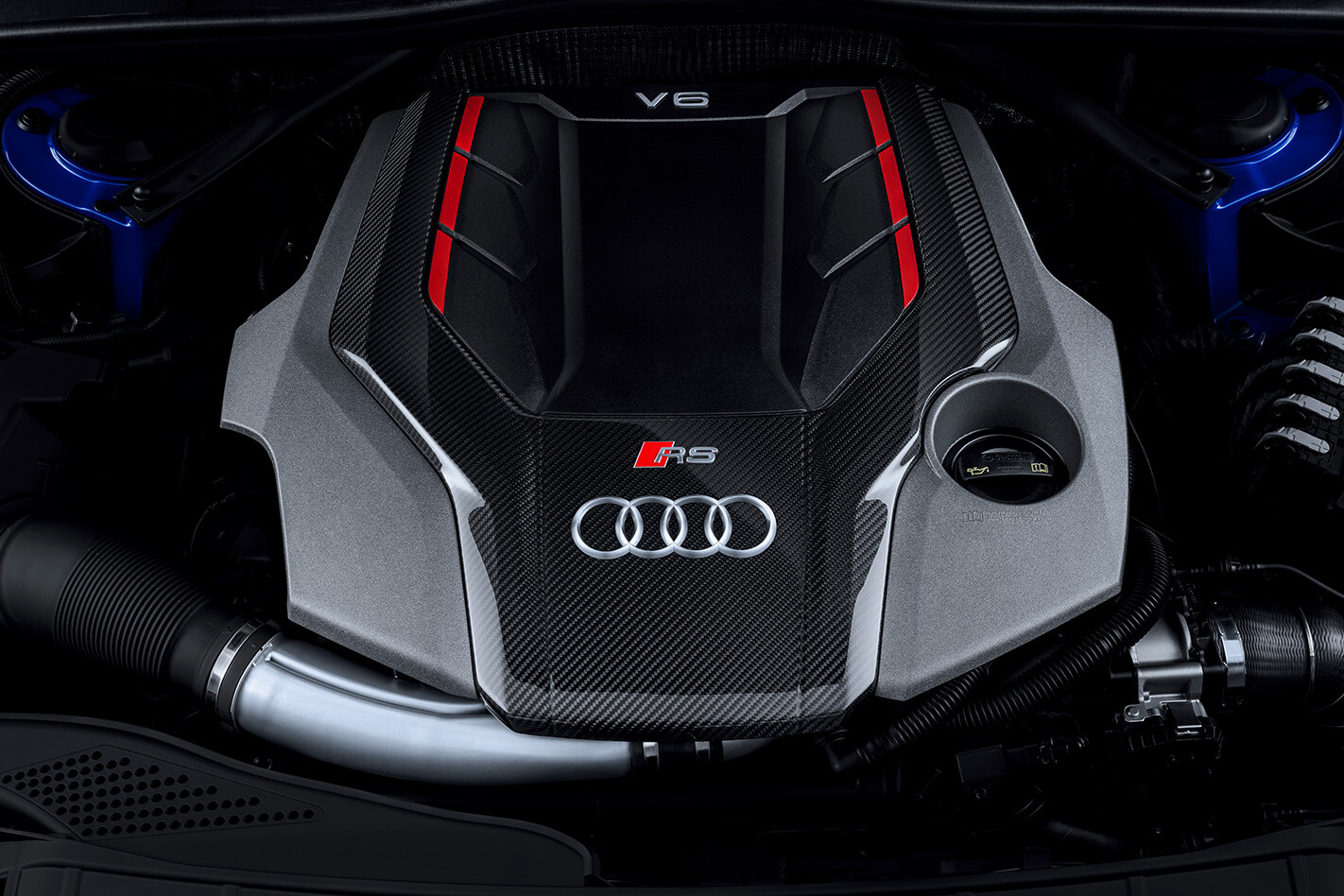 Aside from the powerplant’s game-changing increase in torque and the transmission’s talent in maximising it, the RS4 impresses in other regards. The difference between the Comfort and Dynamic drive modes is marked but not gratuitously extreme. Set into Comfort, with the gearbox doing its own thing, the RS4 is supple enough for city driving, even if the 800rpm idle is a little resonant. Switch into Dynamic and the throttle mapping gets incrementally spikier, the ride firms up and the Sports mode on the transmission is smart enough to ensure that the low-rent plastic shift paddles never really get too much of a workout.

Australian cars will come fitted as standard with a choice of either Hankook Ventus S1 evo2 or Continental ContiSportContact 6 rubber. They also get the excellent quattro sport differential, a sports exhaust and Dynamic Ride Control. Effectively a three-mode damper setup that’s diagonally-linked like a McLaren Sport Series car, DRC keeps pitch and roll in check. Without much in the way of reassuring body roll to gauge how close you are to the limit of adhesion, stability control interventions can occasionally take you by surprise. To bring the RS4 to life, the diff (optional in most other markets) is a must, and it rewards being trail-braked deep into a corner with a rapid transition to a serious throttle input. Driven in this manner, it’s possible to get the RS4 up onto its toes in a manner that seems to elude the RS5. The nominal 40:60 torque split is managed by the centre diff, with up to 85 percent of torque directed to the rear and up to 70 percent to the front. The quattro sports diff on the rear axle then apportions drive to whichever of the rear wheels can best deploy it.

The differences between the RS4 and RS5 are subtle, with no changes to DRC in either software or hardware. It all comes down to simple physics. The RS4 runs on lower profile tyres with less sidewall flex than the RS5, it’s 60mm longer in the wheelbase, is 18mm and 13mm narrower in front and rear track respectively, has a marginally higher centre of gravity and instead of the RS5’s 45 percent rearwards weight distribution, the wagon hefts a mere 43 percent at the rear. This means a rear end that’s a little keener to play when unweighted and a more benign nature when it does slip into a few degrees of dangle. When the RS4 makes landfall Down Under in April, expect it to carry a price tag about the $155,000 mark. Tack another $12k onto that for the carbon ceramic front brakes for an unparalleled ability to tenderise your Groodle. Dressed with the usual RS garnish of honeycomb trapezoidal grille, 30mm flared guards, an RS roof spoiler, rear diffuser and an interior that’s extravagantly swaddled in quilted leather and Alcantara, it generates some formidable showroom appeal. Who was it that said that Australia loves V8s but drives sixes? If that’s indeed the case, the latest RS4 Avant has potential to become a halo hall of famer for Audi.