A French-designed five-door light hatch, offered in one specification only, and aimed at buyers prepared to pay a premium for generous equipment, ample design flair and customisable aesthetics.

The new Citroen C3 went on sale in Australia at the beginning of the year, but a change of local importer meant a delayed media launch, so this was our first chance for an extensive drive on Aussie roads. Key demerits are the lack of AEB and the engine vibes at low revs. If you can get past this, it’s difficult not to fall for the perky, stylish charm of the Citroen C3. Hard-nosed pragmatists may notice they can buy a class-above Holden Astra R for this sort of money, but that’s not the type of buyer Citroen clearly has in its sights. PLUS: Funky looks stand out from the crowd; interior has a welcome dash of design flair and nice materials; mostly cheerful and accomplished to drive
MINUS: Pricey; low-rpm engine vibes, snoozy transmission calibration, no AEB

IN AN automotive world increasingly full of over-choice and over-complication, there’s something refreshingly straightforward about the arrival of Citroen’s C3 light hatch into Australia. It’s offered in just one (lush) spec level, with one sensible powertrain. Oh, and one pretty rich price tag, but more on that in a moment.

What the C3 also brings is a generous splash of design-driven pizazz and customisable style to what is a mostly sensible, pragmatic segment. Think of it as a stiletto to the eye of a Yaris. The surfacing is curvaceous, the proportions pert, and there’s ample potential to spec one that’s unlike anyone else’s via nine body colours ($290 or $590), three roof colours, the no-cost option of black 17-inch alloys, and three choices of interior trim combinations ($150 or $400). C3 is built on PSA’s long-serving PF1platform; an entirely conventional architecture for this class with a torsion-beam rear-end and strut front, but does feature disc brakes at all four corners. Wheelbase is 2539mm with an overall length of 3996mm, making it around 60mm shorter than a Mazda 2. Yet smart packaging means there’s enough leg, foot and shoulder room in the back for two average-sized adults if the front occupants don’t require full rearward travel of their seats, or it will easily take three small kids. Seat-up cargo capacity is 300 litres, ample for this class, and expands to 922 litres with seats folded.

More attention grabbing is an interior that stands apart from the competition for design flair and clever flashes of upmarket-feeling materials to distract you from the fact that the bigger, more costly bits, like the dash and door trims, are really not that costly at all. A slender satin-silver frame wraps a compact dash face, matched to a fabric accent. Retro-looking door-strap handles are intended to evoke thoughts of designer luggage. The seats lack side support, but are generously sized, properly comfortable, and come trimmed to look like something more upmarket. A 7.0-inch touchscreen sits in the centre of the dash and, along with the now-obligatory Apple CarPlay and Android Auto with MirrorLink, handles pretty much everything, including ventilation, which won’t please everyone. 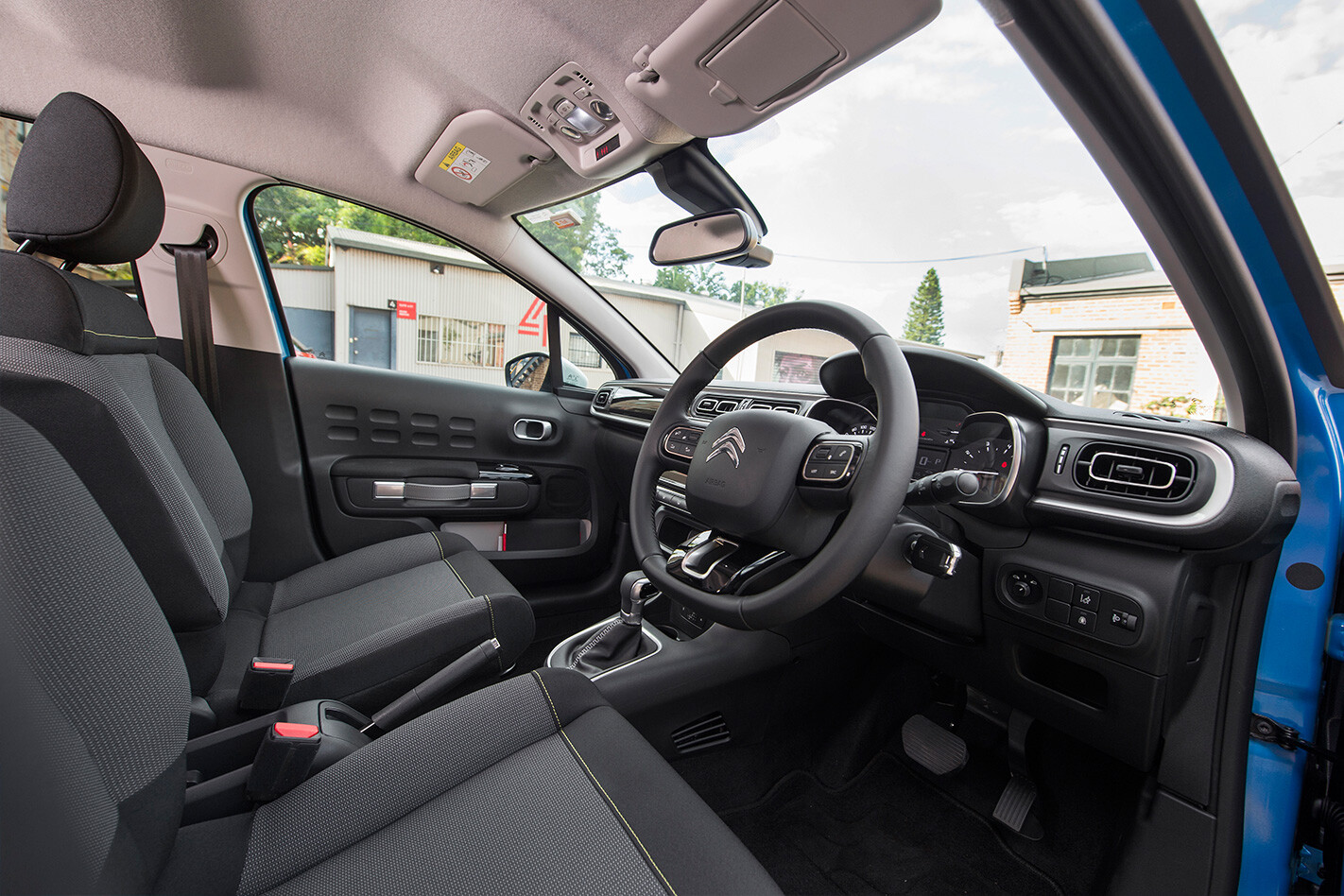 Colour and trim choices aside, the options list also keeps it simple: a $600 sunroof or a $600 feature called Citroen ConnectedCam, which is a wide-angle HD dash camera positioned behind the rear-view mirror to record traffic incidents or riveting road-trip moments to share on social media. Safety gear includes lane departure warning and speed limit recognition, but the crucial omissions are AEB and blind-spot monitoring, which explains the ANCAP rating of just four stars. AEB is only now making it into European cars; PSA won’t say when the safety system will make it onto Australian C3s; only that it will.

Steering that is feather light at parking speeds does gain a little more weight on the move, if not feel. But there’s delicacy and immediacy to the wheel’s motions, so no major complaint. Likewise the ride and body control, which, thanks to fairly relaxed damping, strikes an acceptable blend of easy-riding compliance with contained roll when you lean on the C3’s front end. It’s a much sweeter riding car than the related C3 Aircross small SUV, although sharp dips taken at speed do reveal a lack a rebound control. 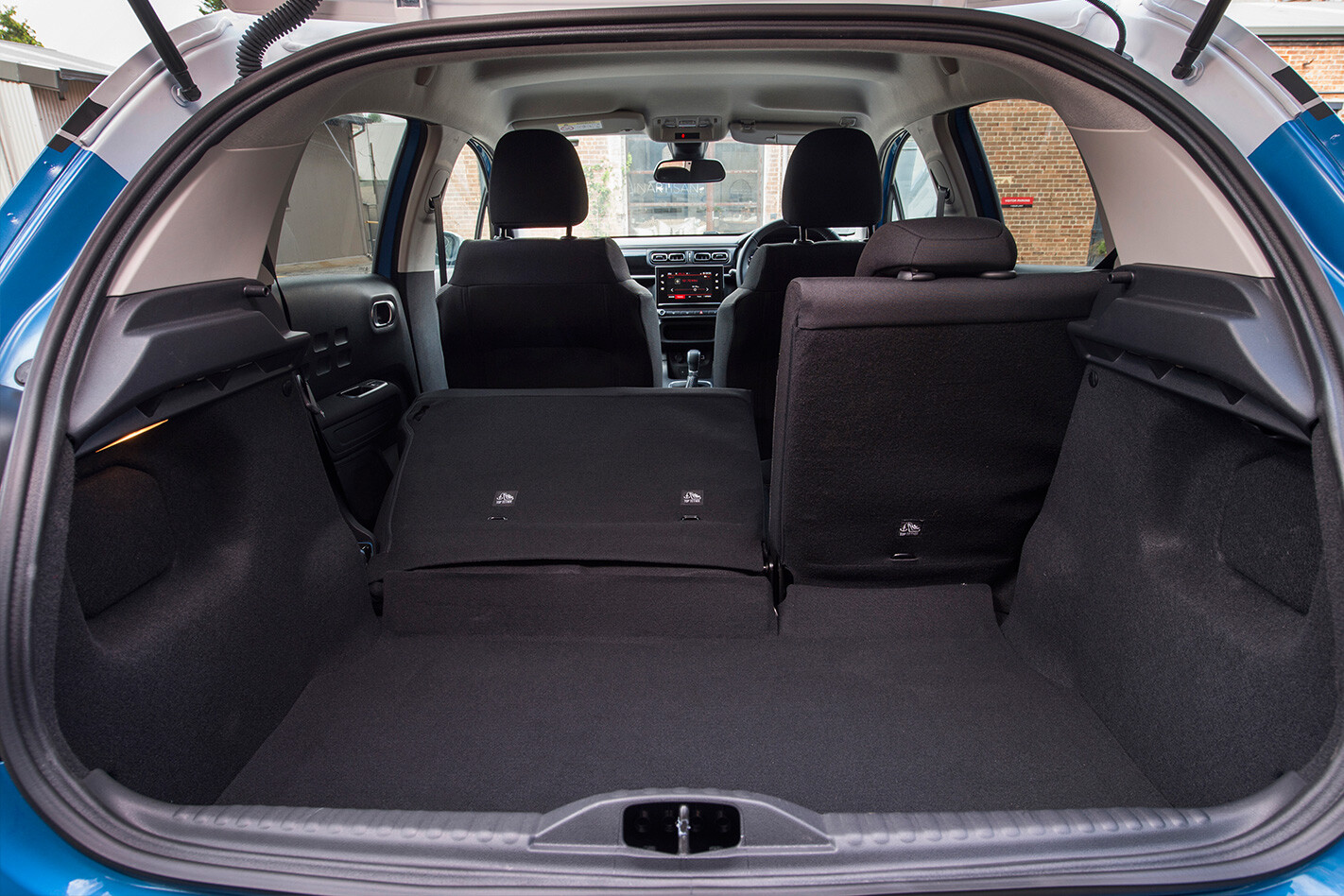 The powertrain, meanwhile comes with its own caveat. The 1.2-litre three-cylinder turbo-petrol is mated to a six-speed torque-converter automatic, and it’s mostly a very good combo. But two issues: first, the band of low-rpm vibration when moving away from standstill and at crawling speed. Then there’s the transmission calibration itself, which errs toward econo-focused snoozeville. Not an issue in daily driving, and there is a Sport button for a more aggressive calibration, but that brings an insistence for excessive and irritating gear-holding. Better to move the selector to the manual mode and shift yourself if you want to have a crack. On the upside, the engine is a super willing and very torquey, and with a feisty, parping note.

So overall, C3 is near-impossible to dislike – or ignore. Sure, the price is clearly aimed at customers amenable to paying a premium for fashion: a retail of $23,490, with an initial driveaway deal of $26,990. If the Japanese or German alternatives in this segment leave you uninspired, perhaps the price of French chic won’t be insurmountable.