Who would’ve guessed that the device most likely to depose Toyota’s 86 GT as the best driver’s car under $30K would be a humble compact hatchback, its DNA designed for supermarket car parks, 1.6 litres driving the front wheels and a torsion beam dragging its rears along for the ride?

And what a wild little ride the Ford Fiesta ST is. Its needle-sharp $25,990 sticker dips well below Toyota’s cut-priced sports car and what other lightweight-yet-heavy-hitting hot hatches have traditionally asked for. 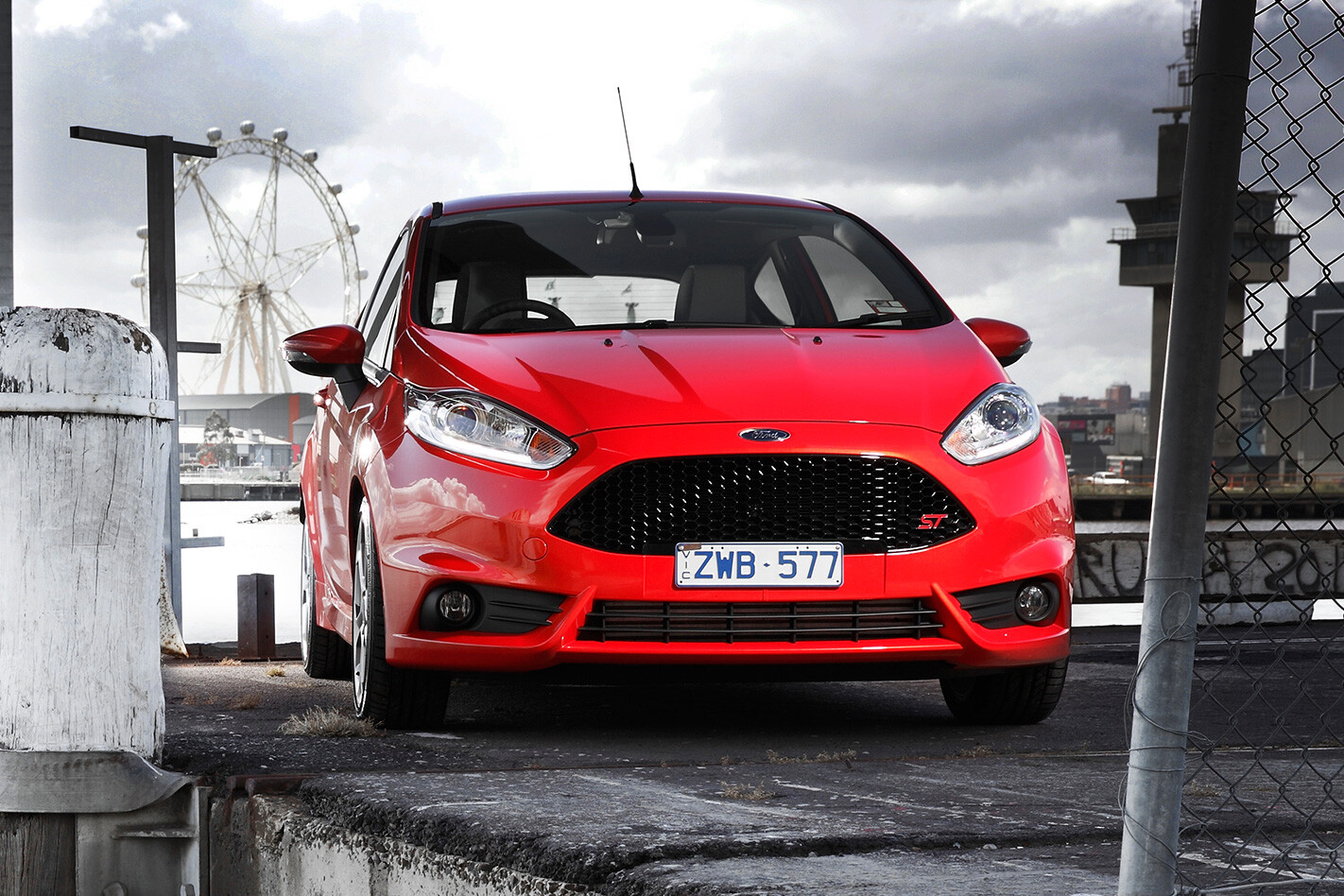 After sampling the ST in isolation, the verdict was a resounding one: The Blue Oval baby bundles together the kind of pace and fun factor on good roads that many cars twice the price can’t. Better than plenty at thrice the price, for that matter.

When Peugeot’s hotly anticipated GTi revival arrived in 208 form in Oz for $29,990 – the very same week as ST’s local launch – faces were slightly grim. But we’re assured the junior Pug brings with it a level of style, richness and maturity often lacking in the fast end of the small hatchback segment. Better yet, when let off its diminutive leash, the GTi proves an absolute corker – oodles of pace, heaps of fun – when thrown down a twisty back road.

The two are clearly different. Ford Team RS in Europe has honed the German-built ST to favour athletic ability, while the GTi, built in Poissy, France, aims (in Polo GTi tradition) to be the finest all-round hi-po supermini in the biz. The $4000 difference is a fortune at this price point, but there’s a lot to play for. Pace? Sure. Fun factor? Absolutely – though each has strengths in different areas, such as quality, equipment or value. The ST certainly wears its brasher, more aggro character on its sleeves. Outside, it gets the newly face-lifted Fiesta range’s Aston Martin-esque face, while the interior styling is typical of Ford’s like-it-or-lump-it design direction. The Recaro seats certainly weld your torso into the experience, and the German-built ST has some softer-touch materials than other (Asian-built) Fiestas.

But the centre stack is a case of fussy over design and struggles to escape its cost-conscious roots. It’s no stripper though: Single-zone climate control, eight-speaker audio, rain-sensing wipers, auto headlights, Bluetooth connectivity, smart key entry, seven airbags and an auto-dimming mirror are all standard equipment. There’s no sat-nav (even as an option) and no digital speedo, though.

The GTi manages to dodge the clichéd youth stylisation that afflicts small performance cars and alienates those of us who don’t wear our baseball caps backwards. There’s subtlety in its exterior appearance and a refreshing sense of quality in the detail. Climb inside the GTi and the premium feel is worth a good chunk of that $4000 investment. 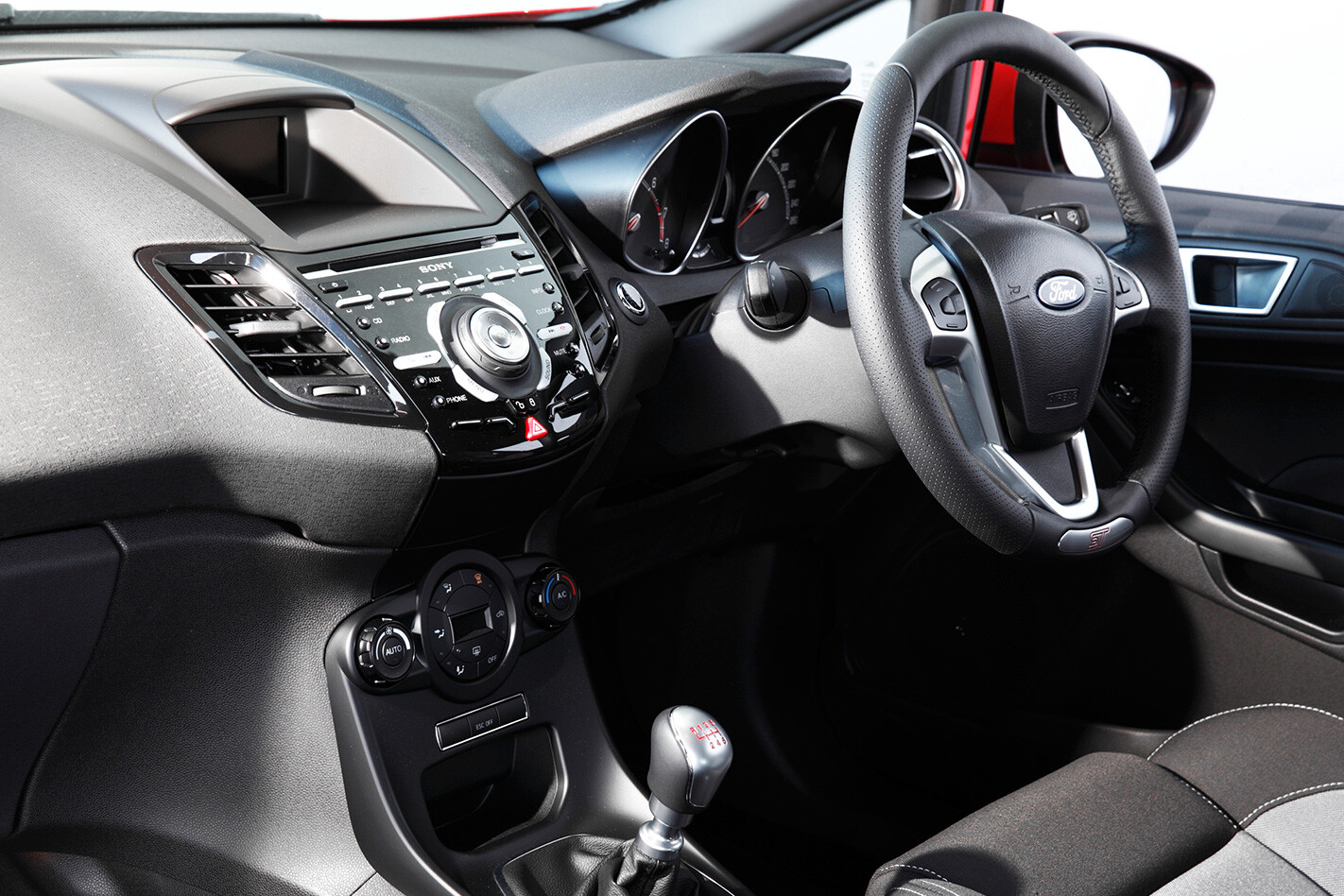 It’s much richer inside than the ST, and while the partial leather seats aren’t quite as purposeful as the Fiesta’s, they blend comfort and support nicely. There’s red stitching throughout, dual-zone climate control, coloured ambient lighting, a colour touchscreen with sat-nav and more judicious use of aluminium, though you only get six airbags.

The real buzz-killer is the weird red-to-black finish on some of the trim that can’t be delete-optioned. In terms of driver ergonomics, the 208 is better than most Peugeots, but the Fiesta has a slightly more natural relationship between driver and controls.

A big black mark against the French car is its tiny steering wheel, not due to its size but because with any normal adjustment setting the upper half of the rim completely obscures the instrument cluster. A deal-breaker? For some it will be.

Both use 1.6-litre direct-injected turbo fours, yet the form guides suggest there’s a larger gap between the French and German hatches than is the reality. The GTi boasts 147kW at 5500rpm with 275Nm available from just 1700rpm. Meanwhile, the ST officially offers 134kW at 6000rpm and 240Nm from 1600rpm. But those numbers don’t take into account the ST’s ‘overboost’ function, which lifts outputs to a GTi-matching 147kW and a dominating 290Nm. It’s a strange one. See, the Fiesta’s overboost calibration doesn’t operate in a narrow rpm band like a Focus ST’s does. Instead, with your right foot buried into the firewall, it provides up to 20 seconds of amplified output between 1600rpm and 6000rpm. Given the ST can hit 100km/h from a standstill in a claimed 6.9 seconds, it’s fair to say you’d be closing in on 200km/h by the 20-second mark. Why Ford underplays the ST’s real-world vigour is a head-scratcher.

Regardless, the GTi feels like it pulls harder in the lower mid-range of the rpm sweep, and it claims it’ll arrive at triple figures 0.1 seconds quicker than the Ford. But while the ST doesn’t quite have the initial slug down low, it swings pretty hard in the upper reaches of the tacho needle sweep, feeling a little more energetic and alive in doing so.

Both are virtually lag-free from the rpm depths, satisfyingly tractable, and capable of sling-shooting their lightweight 1197kg (ST) and 1160kg (GTi) masses forward with heady force. Either car is enthusiastic enough to tear traction away from its modest 205mm-wide 17-inch front rubber, but it’s the ST that begs you to wring its neck and rewards more – sonically and dynamically – when you do. That’s not to say the GTi is any less potent. In fact, the Pug feels a touch more eager, particularly when exiting corners.

The turbo engine’s mid-range kick lends an effortless vibe to making rapid forward progress between the curves. Neither is better or worse – they’re simply suited to different driver tastes and, thus, demand to be driven differently. But one thing’s for sure, both are deceptively quick cars.

Both are only available as conventional six-speed manuals and both, incidentally, come in three-door-only forms. Neither transmission is a particular pillar of weight and accuracy in hand, though the ST is slightly tighter in gating and slicker in feel. Their pedal arrangements, too, are good rather than stunning, the GTi suffering from the pronounced stagger of other cars in the French breed (such as the RCZ). That said, the clutch feel is more accurate in the GTi, whereas the ST’s is a little vague when predicting the bite point.

Particularly impressive is how well the ST’s mechanical systems gel together.

So often hot Fords feature the appropriate hardware for strength and performance yet lack a level of calibration and honing that make a car satisfying to drive. But with the Fiesta, Ford Team RS has created a car with real synergy.

The French car, too, feels completely and utterly polished once you get a move on, particularly the suspension set-up when you throw it up or down a challenging Aussie back road. The GTi is pretty handy on track, but you really notice the body roll, tends to light up the inside front wheel too readily and its engine gasps near redline. It shines much brighter when hustled hard across unruly surfaces, its superb damping allowing manic roadholding across mid-corner bumps and over patchy pockmarks, its sweet balance offering swift apex speed. If you spend more time on back roads than on circuits, the Pug is a nice fit.

What’s immediately obvious moving into the ST is just how more direct it feels, how much extra clarity there is between driver and road surface, particularly through the steering wheel and seat.

Some of the connection is no doubt a by-product of the chassis stiffness – the ST certainly sits flatter in corners, its ride more fidgety and uncomfortable over more surfaces. Yet there’s enough compliance in the suspension that you won’t want be spat off the road at the first mid-corner undulation. 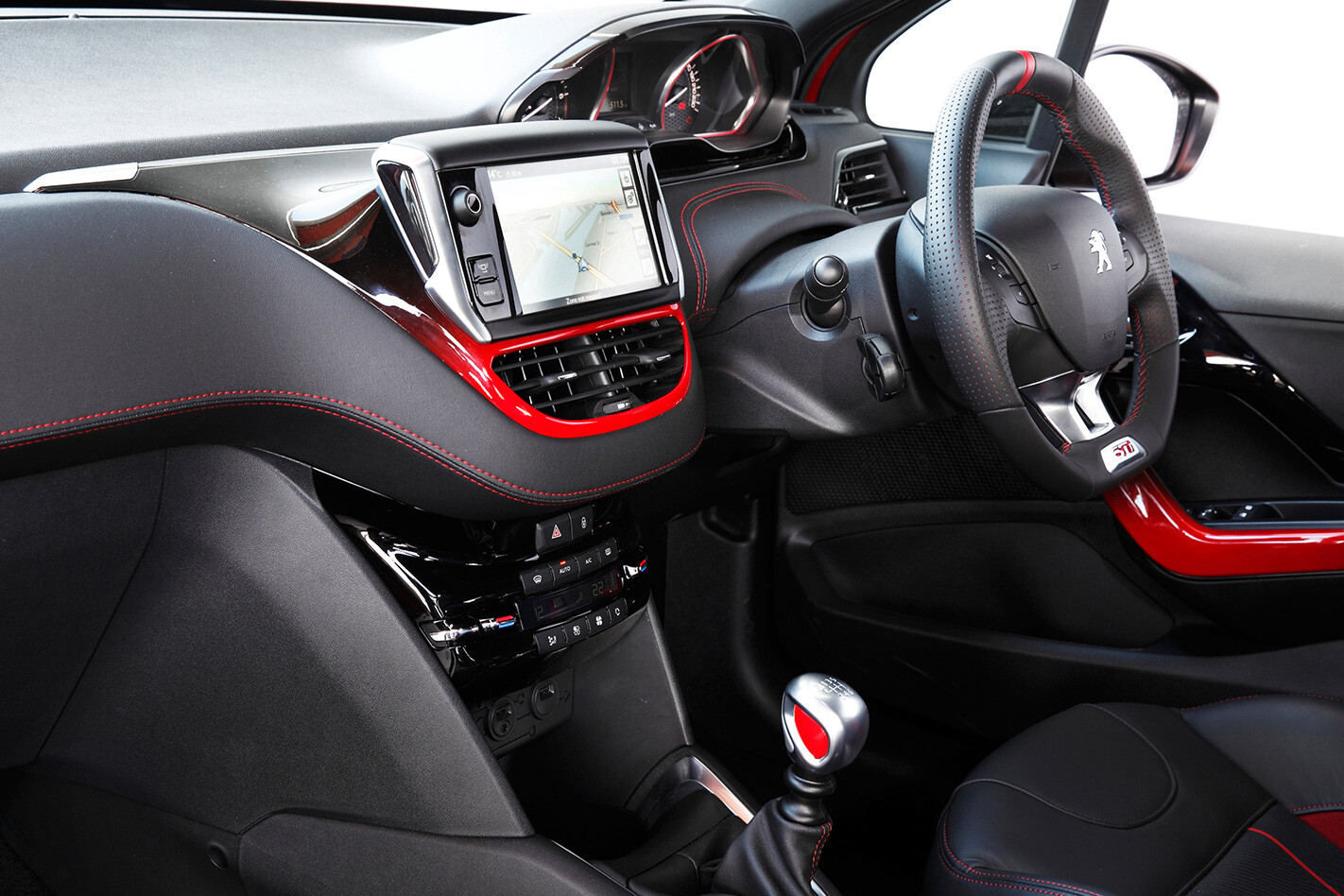 While the Peugeot is quite playful in dancing through direction changes at moderate speeds, it feels benign compared with the ST’s manic, razor-sharp handling character when you really start to push on. Not only is the Ford’s steering channelling higher levels of communication, its eagerness to change trajectory is more fearsome and its front-end accuracy and bite is more ferocious.

Lift off the throttle in a curve and the Fiesta reacts instantly and aggressively. And though the Fiesta’s responses are electric it’s also impressively balanced, a sort of happy medium where little wheel or pedal input is required to hustle the hatch along.

Even though the GTi is an exceptionally good real-world hot hatch, it simply doesn’t move one of the world’s most exciting segments along like the ST does. The Fiesta offers both old-school, wring-its-neck fun factor with new-gen ballistic pace in droves, in a German-spun package that costs veritable peanuts.

The next time Bang For Your Buck rolls around, the Fiesta ST is going to be one helluva tough little act to beat.