Before you order a Renault Sport Clio, do yourself a big favour and get your mitts on a Peugeot 208 GTi.

The first Peugeot GTi to be sold here (from August) since the 206 GTi 180 was pensioned off in 2007, the 208 follows a string of Pugs wearing those famous three letters that didn’t quite live up to the benchmark set by the wonderful, feisty mid-’80s 205.

So can the 208 bring GTi redemption? Like its arch-rival Clio, the 208 GTi boasts 147kW 1.6-litre turbo four power under its equally frumpy bonnet. The Pug, however, has a six-speed manual, less weight and fewer doors than the five-door, dual-clutch-only Renault. 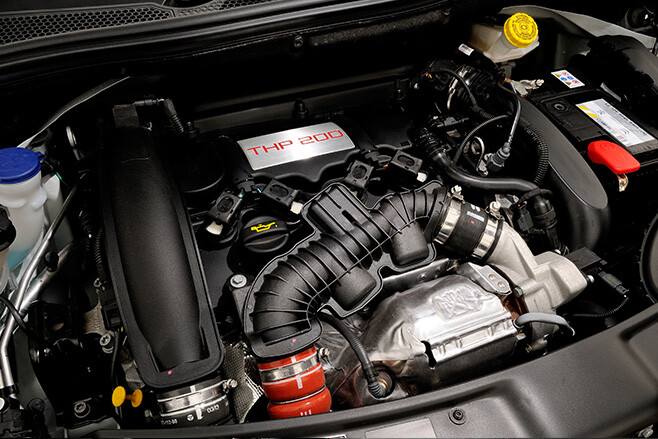 Not that the Pug advertises its pace all that much on the outside. You could say it’s subtle and sophisticated, but look closely and those ‘extended wheelarches’ look glued-on with double-sided tape. And the 17-inch alloys, while being elaborate in design, appear way too small.

The bodykit, too, which includes our test car’s optional nose-bleed lower red vane, looks like an afterthought compared to the more integrated add-ons adorning other compact hot hatch suspects. And from the rear, this anonymous white hatch could easily be mistaken for a Pom’s hire car somewhere in Spain. 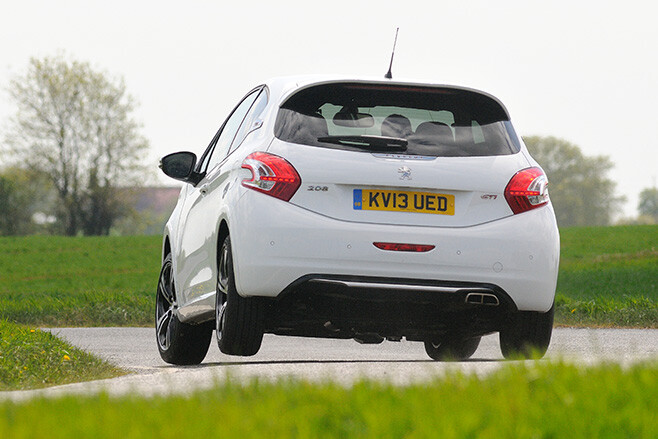 Climb in, though, and the slightly gaudy black-and-red door pulls reveal a nice, firm thud as the door closes, the cabin having a premium feel with quality textures and finishes. The supportive leather-bolstered, tartan-cloth seats look great, while there’s also an easy-to-use touchscreen and solid switchgear. It feels like it’ll hold together, unlike many hot Pugs of the past. The little French machine certainly stood up to, erm, being jumped over bridges during our test...

Essential to the sporting ensemble inside is the traditional red stitching, red centre-marker on the leather wheel and the bright red LED that borders the dials that can be switched on or off at the touch of a button. The carbon-patterned instruments are carried over from the concept car and look cool, but you’ll have trouble reading them because the driving position – much like in Peugeot’s RCZ – is an afterthought. Typically French, then…

It’s almost as if the 208 was developed without a performance model in mind, because the steering column doesn’t offer enough adjustment, so you feel like you’re holding the tiny steering wheel too close to your chest once you’ve set the pedals right. Adjust the wheel, and then the pedals are too close. Taller drivers who favour longer-haul, ergonomic comfort need not apply. Yet the 208 GTi is a cracker to drive. It certainly feels to be one of the lightest and liveliest of today’s micro hyper hatchbacks and this is evident the instant you start driving it. The well-weighted aluminium pedals that are in tune with the precise, smooth shifts from the six-speed manual gearbox. And as you march towards the redline, while there’s a sweet burble when you’re on the throttle.

The power delivery from the 1.6 turbo – the same PSA donk used in the RCZ, DS3 and Mini – isn’t brutal so you’ll need to drop a gear for instant punch, but it does deliver the goods in a progressive and linear manner. It’s a shame that the GTi’s engine doesn’t have the perky nature that it does in the Mini, where it’s raspy note and soothing burble on overrun make you want to mash the throttle over and over just to hear it again.

The Pug seems too conservative for such shenanigans. Still, the bigger brakes (302mm discs up front!) let you approach corners with gusto, and while the electric steering isn’t super quick, it has great progression despite turn-in not being quite as sharp as other hot hatches out there, such as the Clio. 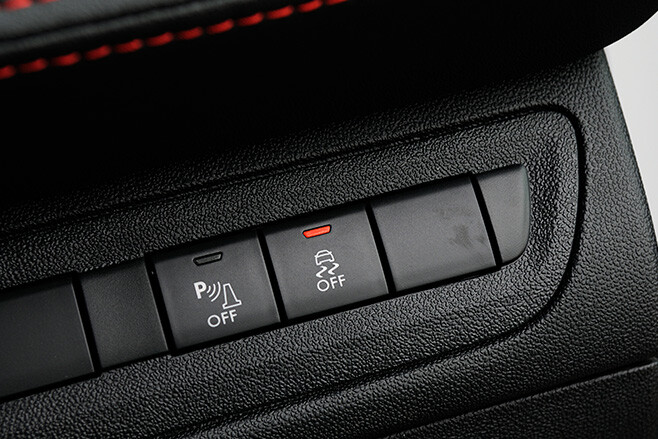 Unlike the Renault, though, there’s not a host of go-faster settings to confuse you, but a simple ESP off button on the dash. Leave it alone, and the ESP will hamper your corner exit when you’re really pushing it; turn it off, and the Michelins go into Hollywood mode, as the GTi’s body control isn’t up there with its rivals thanks to the softer settings which, on the upside, give it an excellent, supple ride.

That doesn’t mean it’s not capable around corners. An extra 10mm front and 20mm rear tracks over the regular 208 endows the GTi with slightly bolder cornering purpose, while its lighter weight encourages you to throw it into curves, where it’s easy to get the nose in and mash the loud pedal on the way out. That said, you still have to modulate the throttle to avoid it all going up in a cloud of smoke – literally. A proper mechanical diff would solve this. 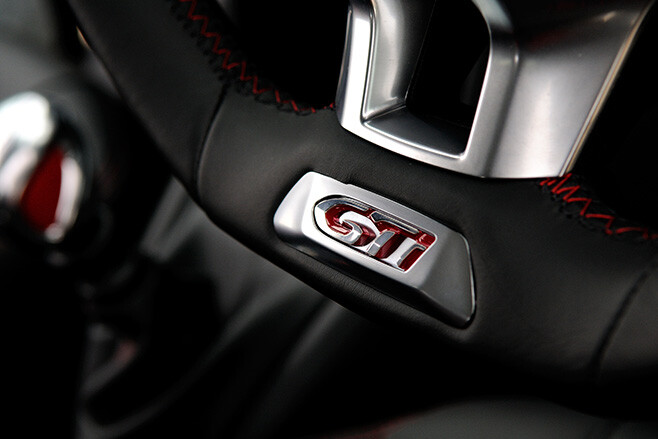 In more serene settings, the 208 GTi is an easy car to live with. Sure, it’s a three-door-only model, but the Pug’s something of benchmark for ride comfort in a segment backed full of fidgety competitors. Its cabin, too, is by far the most luxurious and thorough.

Trouble is, the existence of the Ford Fiesta ST means that both French hatches have their work cut-out for them. And, PR peeps at Peugeot must wish that the 205 GTi never existed, as the glasses become increasingly rose-coloured for the new car’s ancestor.

For modern hatches, though, things have moved on: lift-off oversteer is not a trait desired by owners these days, sadly. However, balls-out, corner carving is where compact hot hatchdom has been heading since the Clio 197s, Fiesta XR4s and like lobbed onto the small car scene. And right here is where the Peugeot has missed a huge slice of mojo. 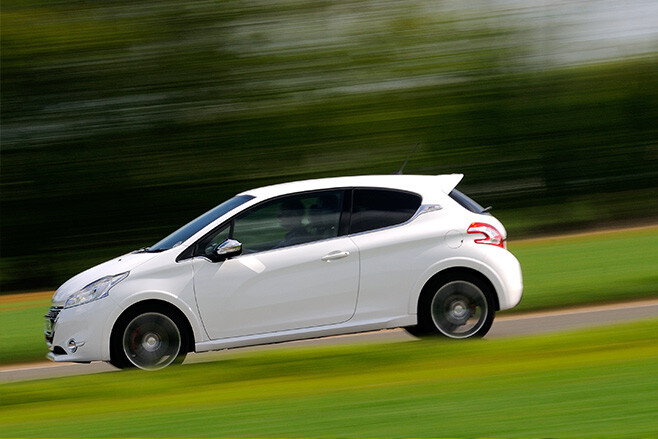 The gentrification of the 208 GTi is likely a symptom of the middle falling out of the new car market, most notably in Peugeot’s home market in Europe where it’s suffering record losses. Budget brands such as Dacia and premium makes such as Audi are selling like hot cakes, while mainstream manufacturers, as Peugeot is seen in Europe, have become collateral damage. The GTi has been pushed upmarket, and that has come with a cost: the lost opportunity to stamp itself as a dynamic benchmark.

While that’s lamentable, it also gives the Pug a niche offering in the small hatch segment as a comfortable, competent performer. Its understated looks could be viewed as a Q-car boon rather than undesired blandness and anonymity, while the more comfort-focused cabin makes rivals such as the Clio look childish and imply that perhaps the money ran out at Ford before they got to the Fiesta ST’s dash.

On the other hand, take a more critical view and you could say the 208 simply hasn’t been honed with same depth and skill as many of its rivals, and that the Pug has a broadly pitched tent rather than a definitive goal, denying it a sharp, focussed role as pure hot hatch. However rewarding and entertaining it is to punt, the 208 GTi falls a little short of its legendary ’80s predecessor’s legacy. Though it’s far from a dud. It’s a clear and strident step up from the flaccid 207 GTi, and while not as hard-nosed as some contemporaries it’s neither as juvenile in its looks nor flawed in its holistic niceness. A formidable and sophisticated hot hatch that’s a joy to drive? You bet.