The Hyundai ix35 Fuel Cell is the world’s first mass-production hydrogen fuel-cell powered car, and its presence in Australia signals the Korean company’s focus on hydrogen power as a key part of sustainable motoring.

WHAT IS IT?
The ix35 Fuel Cell is Hyundai’s fourth-generation hydrogen fuel-cell powered car, and the first prepared for mass production. It uses a fuel-cell stack to power an electric motor that drives the front wheels. A pair of rear mounted hydrogen tanks hold a combined 5.64kg.

With the exception of the drivetrain, the Hyundai ix35 Fuel Cell is just like a conventional internal combustion ix35. 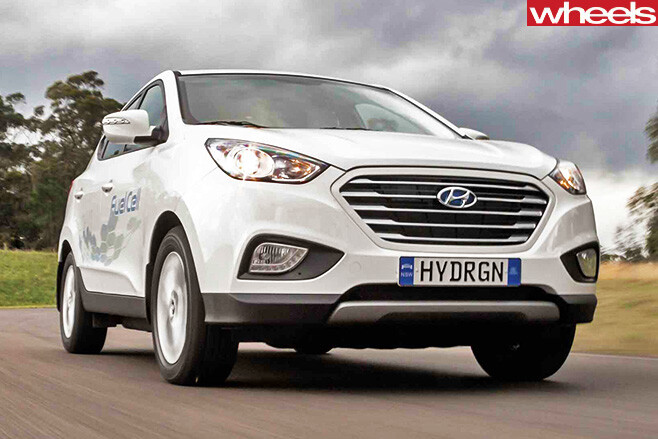 WHY WE'RE TESTING IT
Wheels was offered a drive of the Hyundai ix35 Fuel Cell on a private road as a preview to mass-produced hydrogen fuel-cell cars.

THE WHEELS VERDICT
The Hyundai ix35 Fuel Cell accelerates quietly and effortlessly, like a hybrid, and drives much like a conventionally powered version. Meanwhile, Hydrogen’s environmental credentials (water is the only by-product of using it to produce electricity in the fuel cell), inherent safety, and internal-combustion rivalling range, suggests hydrogen – and the Fuel Cell Vehicle – have a key part to play in our motoring future.

PLUS: Zero emissions motoring; range; smooth, quiet and responsive drive; safety
MINUS: You can’t buy one yet; the cost will be high initially; Australia’s hydrogen story isn’t as advanced as other regions such as California and parts of Europe. 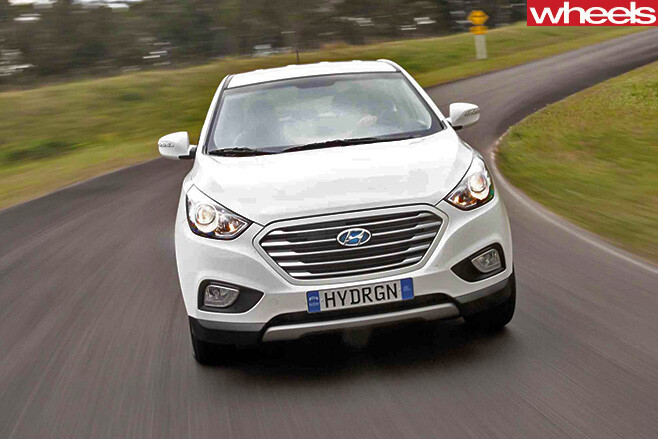 THE WHEELS REVIEW
THE Hyundai ix35 has served over four generations as Hyundai’s development mule for Hydrogen Fuel Cell. The current iteration from the Korean brand makes an almost seamless replacement for the internal-combustion powered medium SUV.

Developments in Hydrogen storage tank and fuel-cell technology have brought the key. Range has increased from the first-gen FCV’s 160km to the current ix35 FCV’s 594km, which is on the page with petrol and diesel cars.

That’s not the only way in which the ix35 FCV fits easily into the ordinary passenger car mould. In fact, unusual instruments are about the only things that make the fuel-cell ix35 any different from a petrol or diesel one, along with the hybrid-like torquey, smooth and quiet driving. Hybrid-like because it is a hybrid, in which a fuel cell replaces the engine and, with a lithium-polymer battery, powers the front wheels via an AC induction motor.

If you listen carefully, a faint fizzing signposts that the fuel cell under the bonnet is producing electricity in a chemical reaction of hydrogen with oxygen. The only by-product is water, which is emitted as a vapour or as the odd drop from the tailpipe.

The precious metal insides of the fuel cell are on the cutting edge, but if you’ve driven a hybrid, there’s nothing confronting at all about driving the ix35 FCV. The immediacy of the motor’s torque delivery means it’s more effortless than the claimed 12.5sec 0-100km/h figure suggests, and Hyundai claims a top speed of 160km/h. At the servo of the future – at this early stage of the local infrastructure story, it’s a refueller at Hyundai’s Macquarie Park, NSW, headquarters – the clean experience is similar to gassing-up an LPG car, while the refuelling time of around three minutes – and the cost per kilometre of filling the 5.64-litre pair of thick-walled aluminium/carbon tanks – is roughly on par with petrol.

Safety is often the first question for prospective fuel-cell converts. Hydrogen’s low atomic mass helps make it an inherently safe fuel, and there is measure upon measure built into the refuelling process, and the ix35 itself.

Drive the SUV and listen to its proponents, and rather than being challenged by hydrogen as a car fuel, it becomes difficult to see a motoring future without it. Hyundai’s fifth-generation fuel cell vehicle is in the works. The company won’t confirm what form it will take, but a sedan or SUV vehicle is likely. Production is set to start in 2018, and we could see it in Australia, perhaps in commercial roles with central refuelling, about the same time.