Isuzu’s utes are basic beasts – but with the right attitude, and training from the guys at Isuzu I-Venture Club, almost anyone can take these 4x4s on the rough stuff.

My partner was excited because she had never driven a four-wheel drive and wanted to learn.

I was excited because I thought I’d get to show her how ‘awesome’ I am at 4x4ing.

The I-Venture Club training day should have been the perfect setting for us both to achieve our goals.

Since it was established, the club has aimed to “offer different experiences to different customers – from the first-time-out novice to the experienced ‘hardcore’ off-roader”. 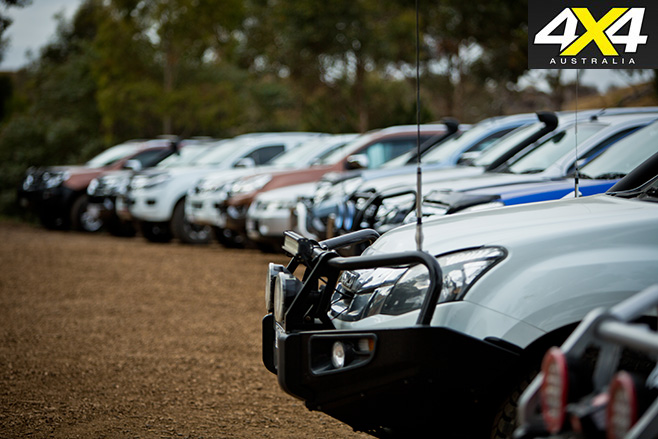 But, more importantly, the club helps Isuzu 4x4 owners get the most out of their vehicles in a safe and structured environment, taking them to some of Australia’s most challenging off-road destinations, with the full support of qualified 4x4 instructors (the last thing you want after you’ve just bought a brand-new Isuzu is to look like a dummy in front of your mates or girlfriend or, worse, end up stranded on a beach as high tide looms).

Now, I’m not an Isuzu ute owner – but, being the honest, durable machine that an Isuzu is, it is probably one of the few new four-wheel drives I could afford to buy. So I was eager to get on the tracks at the Melbourne 4X4 Training and Proving Ground, Mount Cottrell, to see what it could do – and, thankfully, I didn’t have to wait too long.

After a quick session of theory with our 4x4 instructor, a bloke named David Wilson, and a warm up on some moguls, we were taken to a descent most of our crew wouldn’t have been able to walk down. 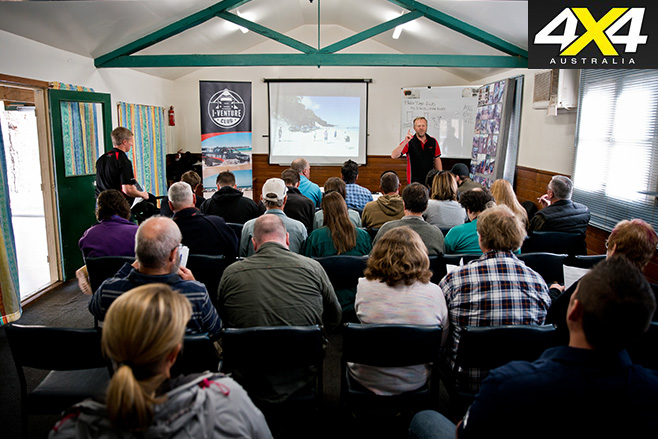 The idea of starting the day by driving off a cliff seemed to be to throw drivers in the ‘steep’ end to build their confidence. But it was also, no doubt, a way to exhibit Isuzu’s first-gear descent speed, which according to Dave, is world-class. To me, however, the descent was a chance to show off my ‘skills’.

“I want you to do the big leap of faith without the brakes,” Dave said as we assessed the obstacle.

I looked at my partner. I had earlier told her that when it was her turn to drive, she didn’t have to do anything she wasn’t comfortable with. She now seemed to be recalling my words, and didn’t want to take the plunge.

“It’ll be a piece of piss,” I said, contradicting my earlier statement. “Have a go. Don’t worry about the car. It’s not ours.” This didn’t reassure her. But the Isuzu crew gave us thorough instructions and that put her more at ease. 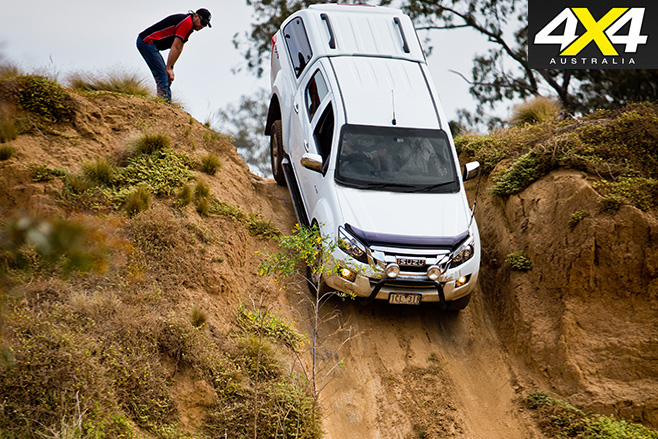 So off we went in our convoy, circling back towards the descent. I was among the first to approach the ramp on the other side of the drop. I accelerated up the mound and braked, with the Isuzu’s nose hanging over the edge and no solid ground in sight. “Now remember, no brakes.” Dave said.

Unfortunately, I ignored Dave and gently tapped the brakes all the way down. I made it to the flat at the bottom, of course, but it was still one of the worst descents of the day. I also didn’t get to experience the low-range reduction of the gearbox.

Hmmm. Luckily my partner does follow instructions and when it was her turn to tilt the D-Max down the hill, she bravely let go and the gearing comfortably brought us to the flat. The day was not exactly going how I had planned – I was supposed to be good at driving, not her. 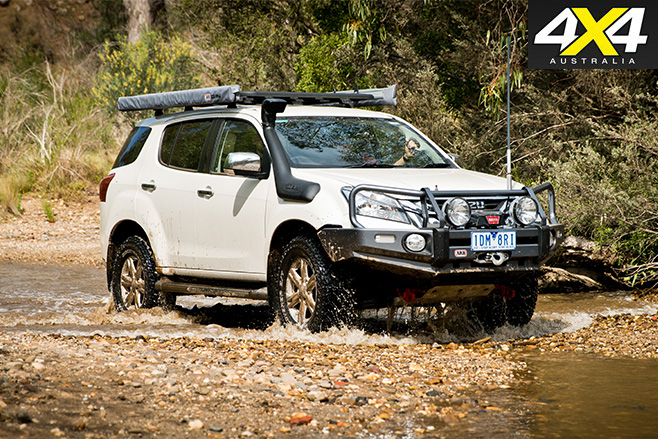 Next up we were taken to a tricky-looking track to learn about side slippage, lean angles and what happens when you lose traction under the diagonally opposed wheels of a D-Max – a 4x4 without a rear diff lock. On the first part of the track, the right-hand-side wheel track steeply rose while the left-hand side sank.

The trick to driving this, we were told, was to resist turning into the upside of the hill – doing so on such a steep incline can cause the wheels to climb, bite in and roll the vehicle. My partner managed the section with ease, and even cruised over a bumpy section where the Isuzu crew had earlier gotten their D-Max stuck to show us how to pump the brakes while accelerating – a kind of manual traction control. 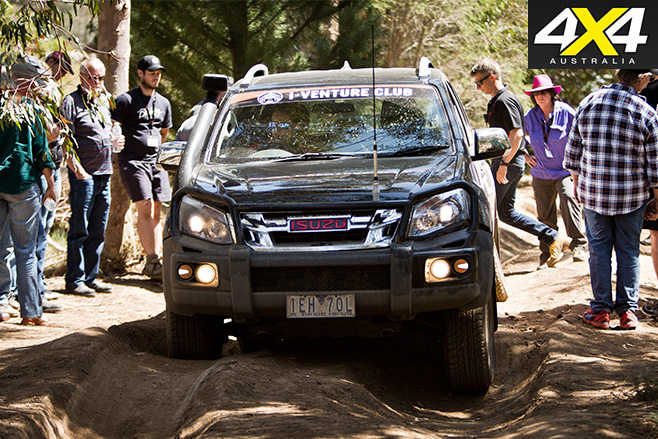 When it was my turn, I also got through the first part without too much trouble, but at the end, when I got to the steep mound, things went a bit awry. I accelerated gently upward until the D-Max’s diagonally opposed wheels completely lost traction. “That’s not working; reverse out,” Dave said.

So I reversed out and straight into another mound, losing my mudflap in the process.
“Try coming up this way,” Dave suggested, guiding me to an easier line. But, again, I became stuck.

Once back at the bottom, I had one final try, charging up with more momentum this time, dirt flying everywhere as the wheels spun, bounced and ripped over the hill. Dave shook his head. “Okay, that wasn’t pretty, but it was effective.” 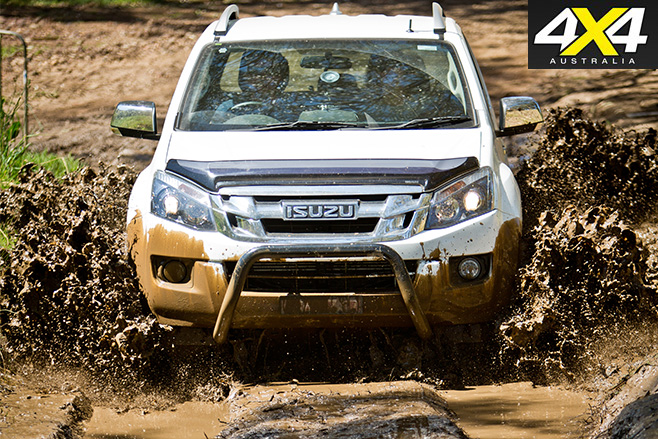 Yeah, it was effective – so effective it tore that section of the track up so badly they had to close it off to the rest of the convoy. Lesson learned – don’t be selfish.

As the day dragged on, it became more and more clear that my 50kg partner, who had never driven a 4x4 before in her life, was better not only than me, but also the entire convoy. In eight hours of driving at this serious 4x4 park, she didn’t get stuck once. How did this happen?

Simple, unlike me, she had gone to the course with the right attitude: she had been ready to learn and ready to follow instructions. And so she got the most out of the training. She didn’t push too hard and she gave the instructors, the course and the vehicle the respect they deserved. 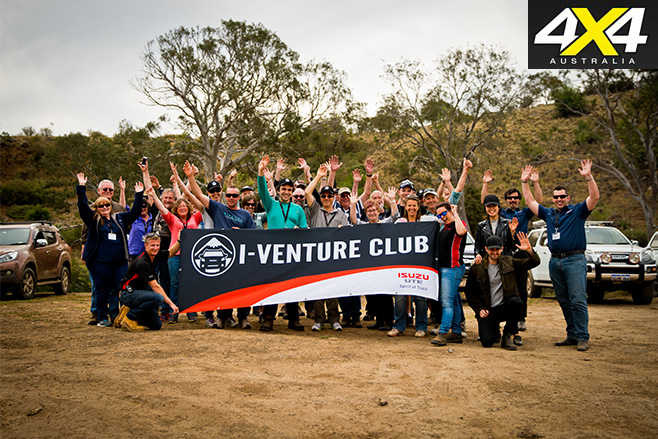 And that philosophy suits Isuzu Utes to a tee – they don’t have all the bells and whistles or sophistication of some other utes, but if you’re willing to keep it simple and use your brain, you can still get a lot out of them. And if there are things they still can’t do, there’s always the aftermarket.

On the final obstacle of the day, my partner descended down a damp, rocky embankment and into a flowing creek – flawlessly. “That was the best descent I’ve seen all day,” Dave yelled through our window.

“I’ll never hear the end of this,” I thought, as I held the severed mudflap in my lap.
Information on current I-Venture trips can be found at www.iventureclub.com.au.