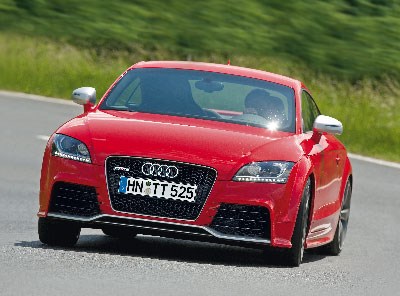 Audi's TT has been on a gradual path of self-improvement.

The first generation looked the part, but never delivered as a driver's car. The second generation gets closer and the recently arrived TTS is enough to make the Porsche Cayman sit up and take notice.

Now we have the brawniest TT yet, one complete with an RS badge and 250kW from the firm's first five-pot engine since the original, legendary Quattro. So has the RS team worked that same magic that transformed the ordinary S4 into the sensational RS4? And can any TT really be worth $140,000?

These questions take a back seat at first, though, because the RS just seems keen to make the point of how different a 250kW TT feels from the already pretty brisk 200kW S.

The TT traits are still there, but now it all happens with added urgency. Yes, the RS is a TT like no other, with the pace to not only outpunch a Cayman S but also trouble a 911 Carrera. It'll do 0-100km/h in a claimed 4.6sec and, if you pay extra, an unrestricted 280km/h top speed.

What's also immediately apparent, is the feistiness of the engine. A 'sport' button moves the throttle map to a more aggressive setting and opens the bypass flaps in the twin oval exhausts. With it pressed, the TT RS is not for the shy and retiring and marks a welcome return of the distinctive five-pot thrum to the Audi stable.

It's a charismatic engine that wills you to get the most from it. With 450Nm available from 1600rpm all the way to 5300rpm, the TT RS will pile on the pace regardless of engine speed or gear.

To handle beefier outputs, Audi has toughened the six-speed gearbox (manual only for now, although there are rumours the company is working on a dual-clutch version).

There are faster cars than the TT RS, but across narrow roads with odd cambers and tightening apexes, the list would be short and include serious names like the 911 GT3. What makes the TT RS so quick? In part, it's that engine and its flexibility, and in part the car's size, but also the ease with which it can be accurately placed on the road.

As with the transmission, the steering is recognisable as that of a regular TT, but with more weight and less slop. And the turn-in on the lower, stiffer suspension is more immediate and grip levels are higher. Thanks to all-wheel drive, the TT RS will only break traction in the dry when exiting the slowest corners, and even then only in first or (occasionally) second gear.

As a tool for hacking across challenging backroads, then, the TT RS is effective. But is that enough? What unifies the old RS4 and R8 and places them beyond the regular Audi range is a lightness of touch that makes them engaging when driven hard.

That and the fact that with the RS4, Audi turned rear-drive stalwarts into quattro converts.

As capable and brisk as the TT RS is, it's a disappointment to discover that it hasn't inherited the RS4's rear-biased torque delivery (in normal circumstances 85 percent of the drive is sent to the front). Pushed hard, the TT RS behaves like a well-controlled and agile but resolutely all-wheel-drive Audi, and as such, it doesn't offer its driver much in the way of interaction. You drive up to the limit of front-end grip and that's about it. Dial in more power and it just understeers. The only way to get any rear-end movement is to come off the throttle sharply on the way into a corner. Perhaps I was expecting too much, but the TT RS behaves much like a regular TT with the wick turned up, and that's not the transformation I'd hoped for.

Nor does the TT RS take well to the sort of bumpy roads it will face in Australia. The ride does its best to keep the worst hits from crashing into the cabin, but the body is constantly jostled by smaller imperfections, producing a restless fidget. This is not so much of an issue for grip or comfort, but the restlessness distracts from the job of actually driving the thing. And again, Audi has demonstrated with previous RS models that it can make a performance car ride with decent composure.

So has Audi stepped up to the mark and delivered an all-conquering driver's machine in the TT RS? One thing is for sure: by borrowing an engine from VW (the five-cylinder unit is used in atmo form in the US market) and strapping on a turbocharger, it has unleashed a cracking powerplant.

However, the engine is so boisterous that it tends to dominate the rest of the car. Steering, handling and gearchange — while perfectly good — do not match the charm or character of the engine.

What we're left with is an extremely brisk and agile TT, but one not as beguiling as some of Audi's more recent RS products, making the premium over the TTS difficult to justify. 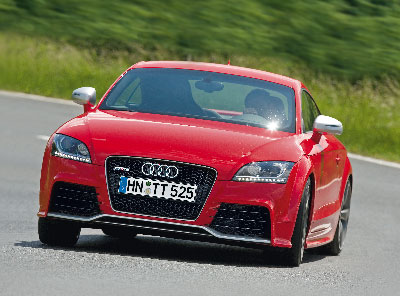 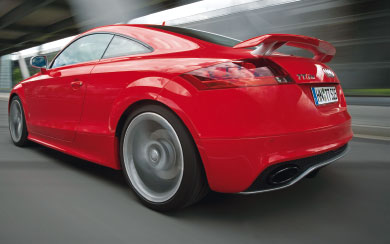 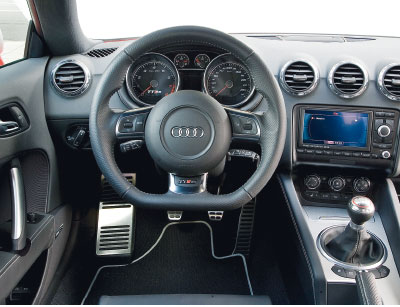