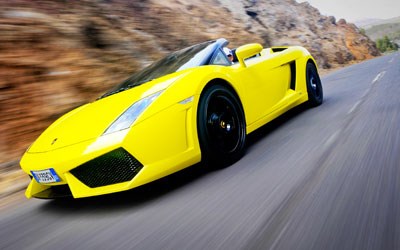 Open season in the bullpen? It's a roar deal.

Retract the roof on any convertible and you immediately open a forum for anyone armed with an opinion. Clearly one person's ideal of gently tousled hair and the heady notes of spring is, for another, a one-way pass to scuttle shake and sunburnt ears filled with the cries of "wanker alert!"


So where do you sit with regard to Lamborghini's new LP560-4 Spyder?

While you decide, it's preening itself in the sunshine not giving a toss. Somehow, through its exclusivity, belly-scraping stance and ceiling-scraping price tag, it manages to (almost) defy conventional soft-top assessment.

The fact is, no-one needs a $455,000 Lamborghini coupe — not while Porsche continues to offer a 911 comfortably under $300K. So it stands to reason that a convertible Gallardo, now crossing the half-mill threshold, should be an extravagance in these times to rival a private jet for car-company executives. Okay, bad analogy.

Yet Lamborghini confidently predicts that 60 percent of Gallardo customers who've limboed under the credit crisis will choose the convertible over the coupe. And having experienced the car on the sinuous, sensational roads in the Canary Islands at the international launch, it's not hard to see why.

Actually, make that hear why. The new 5.2-litre direct-injection V10 is an engine with a seemingly endless vocal repertoire, and removal of the roof invites you straight into the mosh pit for a searing, sometimes savage aural assault. It's brilliantly flexible, as you'd expect from 5.2 litres, but max torque doesn't arrive until 6500rpm, demanding you spin it hard for the desired result. Around 4000rpm, the induction growl sounds like a pack-a-day roadie clearing his throat into the mic. North of 8000rpm, the exhaust note climaxes in a bellowing, chilling roar at a volume surely about as legal as arson. Avail yourself to this engine's full force and you'll quickly forget the price tag while remembering why you didn't settle for a 911.

The six-speed E-gear transmission remains optional ($27K), as per the coupe, but the manual is clearly on the endangered list. None of the 13 cars available on the launch gave you the option to stir a gearstick. No complaints — it's hard to shout "insufficient involvement" from a car like this, and the shift speeds are much improved from the original. Yet the gearbox still falls well short of a good dual-clutch transmission for seamless ratio selection, demanding you ease the throttle slightly or else embrace a footy-club-style slap in the back.

There's little evidence that the roof removal results in a loss of rigidity, and it would take a race track to make the Spyder's weight gain of 50kg apparent. The steering, as in the coupe, is chunkily weighted and deliciously direct. Grip levels, especially on the optional Pirelli P Zero Corsa tyres, are colossal. It takes a committed attack to find a nudge of understeer on the way into anything worthy of third gear and up, and a determined right foot to neutralise it, via the rear-biased all-wheel-drive system, on the way out.

All is not perfect, however. The eight-piston Brembos have a springy few centimetres of travel before you strike the meaty goodness, which I found continually disconcerting. When nailed, however, they're as effective as a forearm to the jaw. Carbon ceramics are optional, but if you require them, then you should have bought a Superleggera.

Cabin turbulence is calmed via the small glass screen behind your head, allowing conversation up to around 140km/h. Beyond that it starts to get a little gusty, although we did we see 250km/h without loss of caps, sunglasses or hair follicles. The top speed claim is 324km/h, which feels credible, but I'd suggest raising the roof before you try.

Time to park the pragmatism. For those with the means, Lamborghini ownership is a statement of arrival; a wave of a flag pronouncing both wealth and taste. And, hey, what better way to improve that flag's visibility than through the open roof of a car as extroverted, intoxicating and accomplished as this? 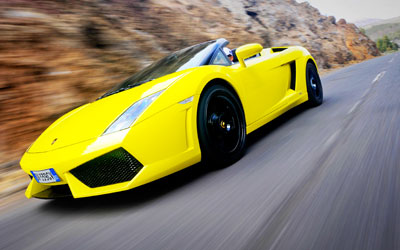 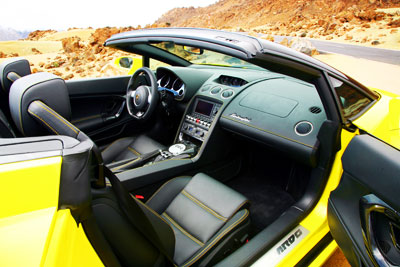 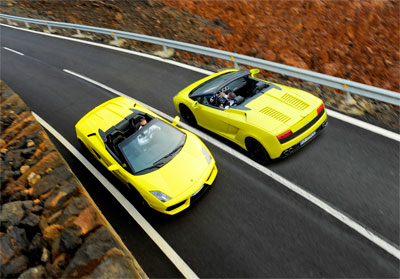