Mazda’s MX-5 through the generations

Mazda’s MX-5 may be the world’s most popular sportscar, but it’s still like any family. Roping everyone together for a catch-up can be a pain.

Today, though, we’re lucky, we didn’t have to coral the four generations ourselves. Mazda’s dipped into its own Heritage Collection and wheeled out each of its MX-5 models for us to taste.

They weren’t covered in dust, either, despite some of these cars being over 25 years old. Underneath they’ve been restored nut and bolt and are regularly displayed in Mazda’s HQ. 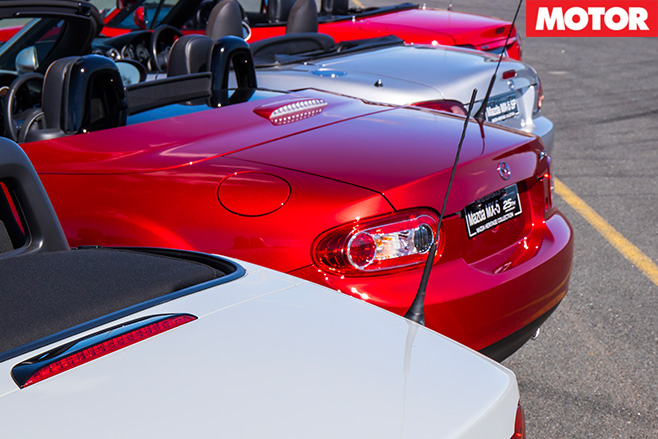 No one’s been able to drive them up until now. At least not like this, with Albury’s Wodonga TAFE track in empty front of us.

Mazda warned it doesn’t want any ten-tenths stuff, but there’s enough rope on offer to have a decent blast and learn how the MX-5’s magic has evolved over three decades.

Kicking off is Mazda’s original hit, the 1989 MX-5, or NA series as its known among trainspotters. 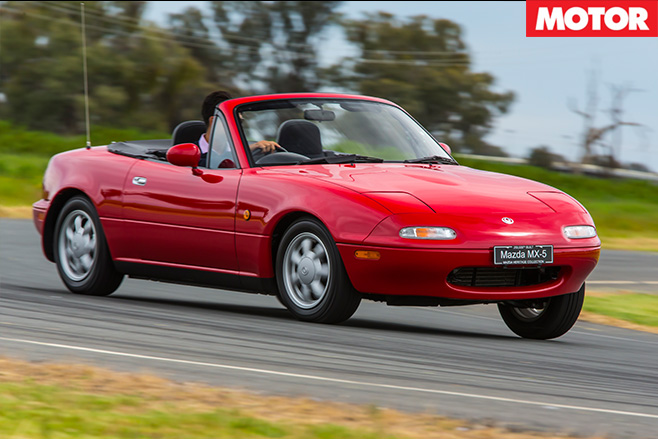 From the outside, headlights stowed away, you first notice how good its design looks – with short overhangs, thin A-pillars, and uncomplicated grille design – even today.

However, this timelessness falls away once you open its tiny little doors, where you’re greeted by old plastics and cloth. The oily bits might be brand new, but the NA’s 8000km-old interior certainly isn’t.

Still, there’s an attractive simplicity about the place, from the stubby lever knob to the large airbag-less steering wheel, and it’s surprising how roomy the place feels.

Firing up the mighty 1.6-litre’s with a key buoys nostalgia, and the five-speed gearbox slots tightly into first, where we’re given access to a piffling 85kW and 130Nm. 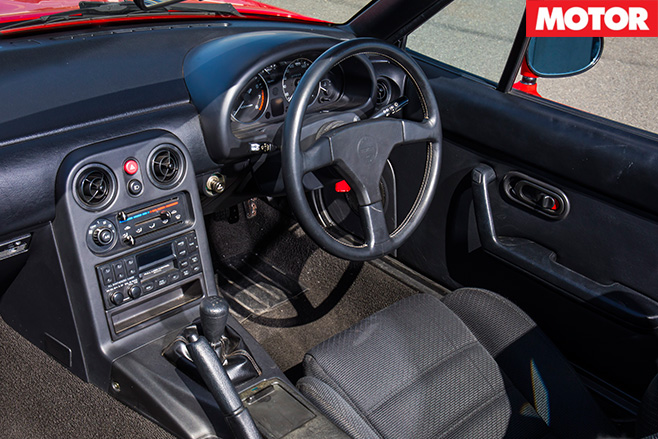 Short gears keep the engine toiling hard out the pits, and the power feels decent enough in a roofless car that weighs 940kg. But corners are more what this thing’s about.

It’s softly sprung and rolls, but to its benefit as its chassis balance allows you to work its tiny 185mm-wide tyres.

You quickly find a rhythm, and we could’ve driven for hours if it wasn’t for what was waiting for us next…

See, Mazda didn’t roll out any old NB-series MX-5 here. It’s actually the boost-sucking SP version of which only 100 were built in 2001. 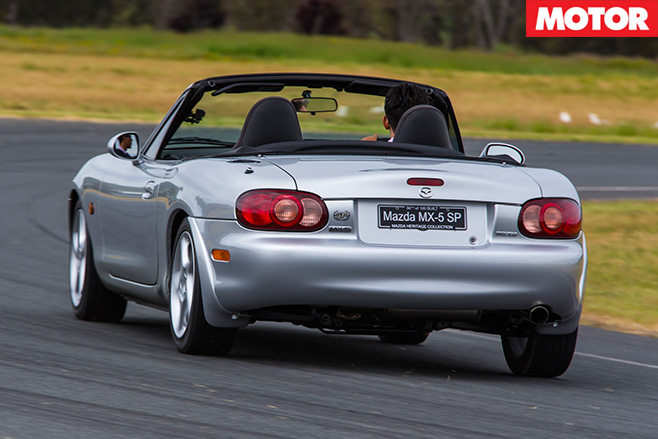 Developed by Prodrive in Melbourne’s Campbellfield, a Garrett turbo was hung off its 1.8-litre four banger, taking power from 113kW/181Nm to 157kW and 280Nm.

That’s more power than Fiat’s incoming turbocharged Abarth 124 Spider and has only 1050kg to haul.

Not only was this SP the world’s first factory turbo MX-5, its airbox would have made it one of the first Aussie cars to sneak carbon fibre into its engine bay – take that, Ford Falcon XR6 Sprint. 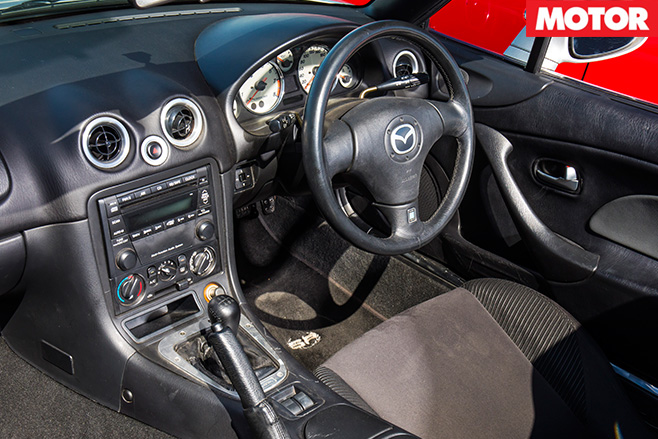 Besides looking at it, though, the engine makes a brilliant noise. It’s quiet on idle, but the turbo wakes with a muffled hiss under full throttle, and sneezes when lifting off.

There’s a stutter when slowly rolling off full throttle, but the power delivery’s smooth and linear and the needle rips towards 7000rpm redline much faster than its older brother. 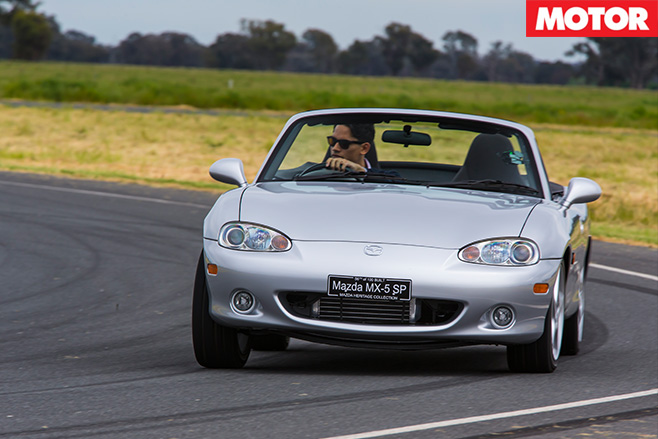 Because the third-generation car instantly has more grip across the front-axle. There’s also more point and agility. Unsurprisingly, it also feels generations ahead in body rigidity, feedback, and roadholding ability. 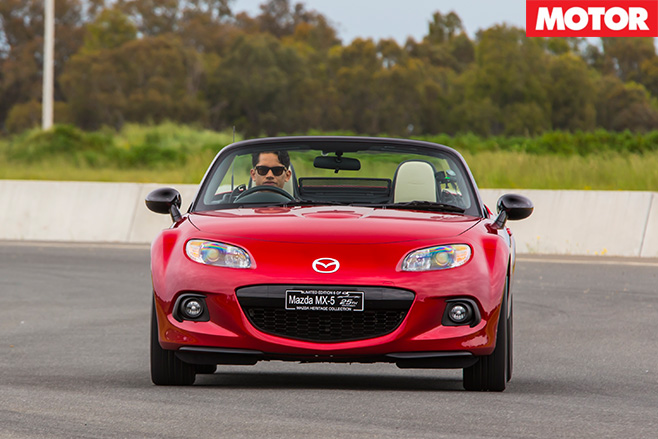 With no turbocharger and some extra padding around its hips (at 1167kg) it isn’t as ferocious down this track’s short straight, failing to really need fourth gear, but it feels the most agile.

Launched in 2014, this special 25th Anniversary edition heeded the car’s twilight years. It would have lacked technology against rivals, Bluetooth and a simple-LCD display the height of its connectivity smarts, but not luxury. 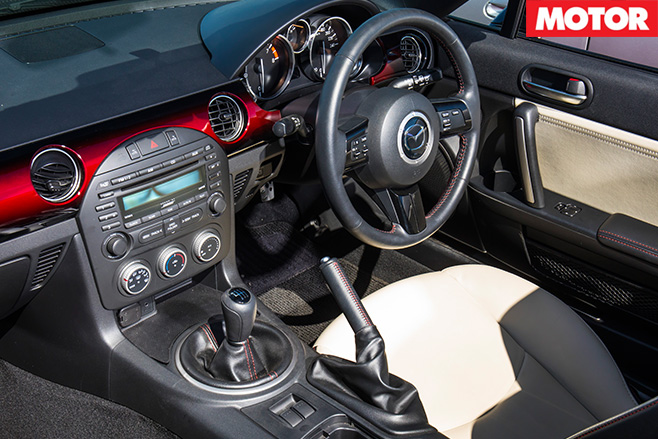 However, there’s something missing from the NC which made the NA and NB so magical. Exactly what that was became obvious in the latest generation…

Mazda’s feverish quest to slim down the fourth-generation car paid dividends, because hooking the ND into a corner at Wodonga TAFE’s racetrack reveals an instrument much like the first two gens. 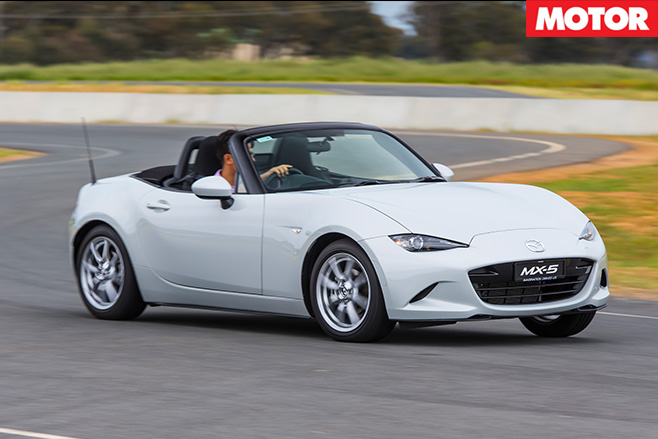 There’s softness to its damping that belies the old cars’ tossability, overlaid with the NC’s sharpness and precision.

The diet helped, which dropped weight to 1009kg for the 1.5-litre MX-5, but compromised some aspects of its cabin. It’s, erm, cosier than the NC’s and the soft-fold roof makes it feel a little no-frills.

No MZD connect means there’s a single-dot matrix LCD display, like the NC, and makes it feel a little pared back for technology. 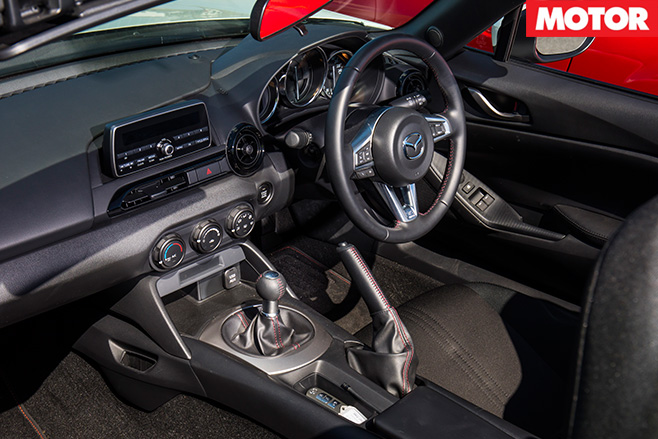 Both engines are the better for the no frills approach, though, because with so little weight to carry the 2.0-litre is hot-hatch fast down the straight. It also owns a flexibility and punch only the SP can match.

Mazda’s managed to not only recapture the original car’s magic for the ND, but its value too. Putting the roadster in reach of the masses again, it launched this year at $31,990 for the 1.5-litre. 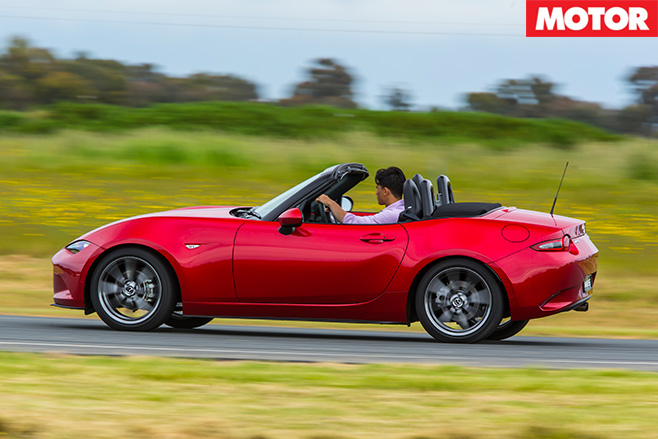 That’s only two grand more than the original NA’s price in 1989, which says a lot about this line of evolution.

Mazda’s inspired idea to revive the British-roadster proved a hit. And 27 years, one million cars, and three generations later, evolution has arrived back at the original’s tactile, involved, pared back driving experience – and price.

By this showing, the family’s closer knit than ever.