Mercedes-Benz has no excuses for not being at the top of the four-seat convertible game. It’s been at it for more than 100 years and its 2014 E500 Cabriolet is now cleaner looking, faster, more economical and far, far safer.

Mercedes-Benz has no excuses for not being at the top of the four-seat convertible game. It’s been at it for more than 100 years and its 2014 E500 Cabriolet is now cleaner looking, faster, more economical and far, far safer.

The outgoing E-Class Cabriolet fan barely complained about any of those areas, but Mercedes has just finished the mid-life upgrade of E-Class sedan and is about to deliver an all-new S-Class. The upgraded technology from both exercises was just lying about at Sindelfingen and it mostly fitted quite easily into the E500 Cabriolet.

There was the smoother grille and air intakes of the E-Class sedan, the optional full LED head and tail lights, a raft of new engines (particularly four-cylinder engines) and new materials throughout the interior. Perhaps its most important new technical feature is Benz’s brilliant Stereo Multi-Purpose Camera, which fits inside the windscreen near the rear-view mirror and feeds its 3D data into the stream of other sensor information delivered to the car’s all-calculating computer.

This upgrade gives the car the ability to see risks its driver has ignored, miscalculated or been distracted from and the kinds of safety tricks this info can be used for are only limited by the imagination of Benz’s engineers. The 3D map covers 50 metres in front and to the sides of the car and the data from the 500 metre range of its radar cruise control is also added to the information stream and Benz admits it is only scratching the surface of how to use this information.

From here, it’s all just software coding to brake the car to stop before a problem, to use its electro-hydraulic steering to veer around a problem or a combination of both. With the engine, gearbox, brakes, skid-control systems, airbag and seat belt systems and steering all managed by computer, Benz believes the Stereo Multi Purpose Camera was the missing link in a massive reduction in crashes, large and small.

But while Mercedes-Benz is clearly hinting that this was a facelift born out of convenience rather than necessity, there has also been the provocation of BMW’s upcoming 4-Series Cabriolet as well.

One counterpoint to that the 4-Series is actually just what BMW is now calling the next 3-Series Cabrio, but to counter that, you could just as easily argue that the E-Class Cabriolet is actually a C-Class with a convertible E-Class body design on top of it. Because it is.

It is a C-Class chassis with a lot of underbody bracing and reinforcing, to be fair, and it gives every impression on the road of being from the larger E-Class family.

There are multi-link suspension units at both ends, large brakes, a seven-speed automatic transmission and rear-wheel drive, but the standout feature of the E500 Cabriolet is Benz’s magnificent 4.4-litre twin-turbo V8.

Designed to replace the old, silken, strong atmo V8, the 4.4-litre uses a big bore and a short stroke to deliver an absolutely fuss-free 300kW and 600Nm of torque.

But it’s not just about the numbers. It’s about the delivery. There is no point in its range where it’s weak. There is nowhere that it can be caught doing something soft or harsh. It’s just strong, with it peak torque arriving at 1600rpm and remaining at that level until 4750rpm, then the power peak arrives at 5000rpm and stays there until 5750rpm. Effectively, it means the E500 Cabriolet can deliver huge strength whenever you need it. All it takes is a gentle prod on the gas.

But when you succumb to the temptation of a far-less gentle prod on the gas, the E500 Cabriolet still maintains its air of dignity, even while its exhaust is delivering its own air of aggression.

The numbers suggest it hits 100km/h in 4.9 seconds (a tenth of a second slower than the near-identical E500 Coupe) and goes on to hit a limited 250km/h, but that’s nothing like the whole story. It hits its speed limiter in fifth, sixth and seventh gears and, if anything, feels as though it accelerates even harder than that once its rear tyres hook up.

Its mid-range strength is phenomenal and makes you wonder if anybody really needs an AMG. Benz must have wondered the same thing, because they won’t make an AMG version, so this is as fast as it will get.

The ride and the handling package feels a little old-school Benz, despite Mercedes trumpeting the car’s new-school handling developments. There is grip and there is stability and there is a rock solid feel on any road, at any speed (including its top speed), but there isn’t a lot of involvement. You might always step out of it feeling fresh from the quiet cabin and the quality seats and the terrific ride, but you won’t come out buzzing from the experience.

The roof has seven layers of cloth and tucks away (at up to 40km/h) inside a 390 litre boot. One of the key evolutions is that the unsightly-but-effective Air Cap can now be switched to an automatic mode. That will lift it from its casing (across the top of the windscreen) up by itself at 40km/h and pull it back in at 15km/h for the sole reason of making it less unattractive at cafe-crawling speeds.

The whole package comes together much better than the old E500 Cabriolet did, though. It’s calm, it’s fast, it feels like a rock and it’s extremely comfortable, with very few weak points.

Until then, and the arrival of the 4-Series, the E500 Cabriolet is a no-brainer for a very limited market. 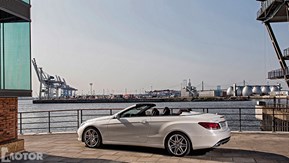 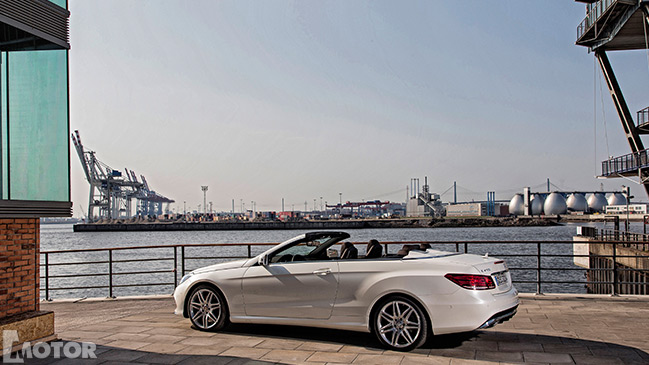 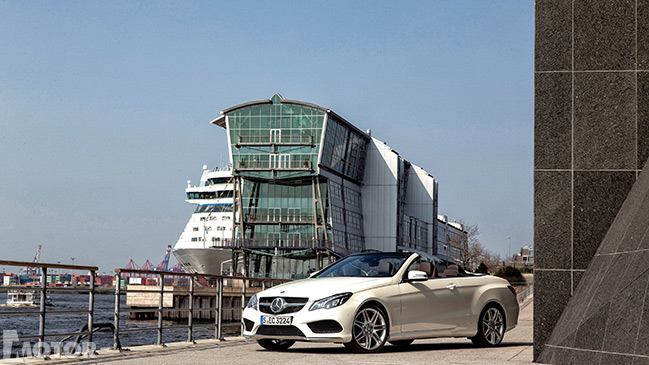 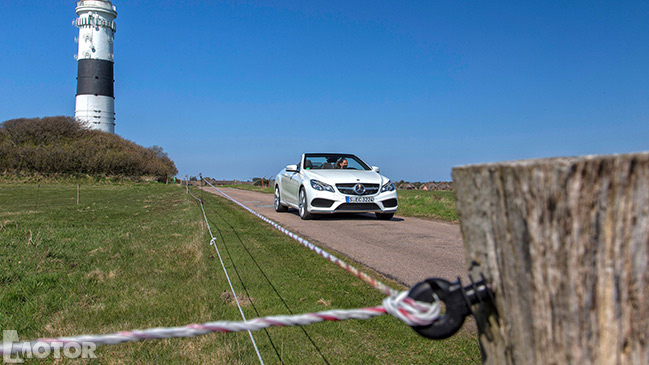 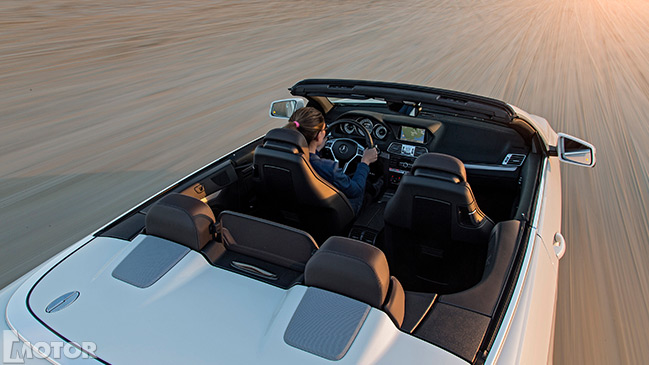