But that all changed when he spotted a little Morris Minor Traveller while cruising around the Auckland bays. He was blown away by the coolness exuded by this tiny Pommy Woody and wondered if he’d ever be able to afford one of his own.

At the time, Shane was touring around in a not-so-cool Suzuki Escudo (Vitara to you and me) and he couldn’t justify the expense of having two toys. Then he came up with a brilliant idea; he’d join the two together!

While casually browsing through the local Autotrader he found a mint-condition Morris Minor Traveller for sale, but he couldn’t bring himself to mutilate such a rare and classic vehicle. So he began to further research the possibility of creating a Suzuki/Morris hybrid, purchasing a few Morris Minor books from the UK and taking some measurements of his Escudo. Once he’d worked out that the Suzuki’s wheelbase closely matched that of the Morris, he hit the go button on the project. 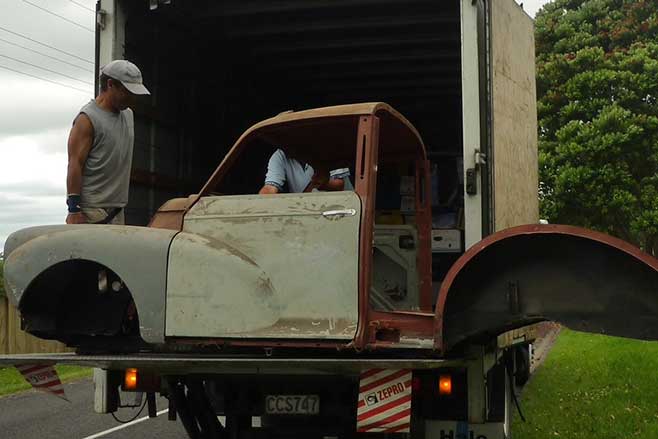 Shane bought the shell of a Morris Minor Traveller and, referring to it as Old Rusty – it certainly wasn’t in good enough condition to complete the project. There was enough there he thought, to at least salvage the floorpan and the roof. As well as Old Rusty, Shane bought a two-door Morris Minor to use for donor parts.

With a growing number of Morris bits and pieces about the place Shane was running out of space, so a mate stepped in and offered his garage (much to his wife’s dismay) “for a couple of weeks,” to store the two-door. With time now of the essence, Shane got stuck in and removed the engine and various other parts that were surplus to requirement and these were sold off in an effort to recoup some of the expense.

A few months later, Shane got in touch with Lance from Freelance Automotive, who had done the low volume vehicle (LVV) certification on his Suzuki, and told him about his Suzuki/Morris hybrid project. Lance thought Shane was nuts, but eventually agreed to help out with the fabrication and welding requirements, so Old Rusty was sent away to Lance’s place. 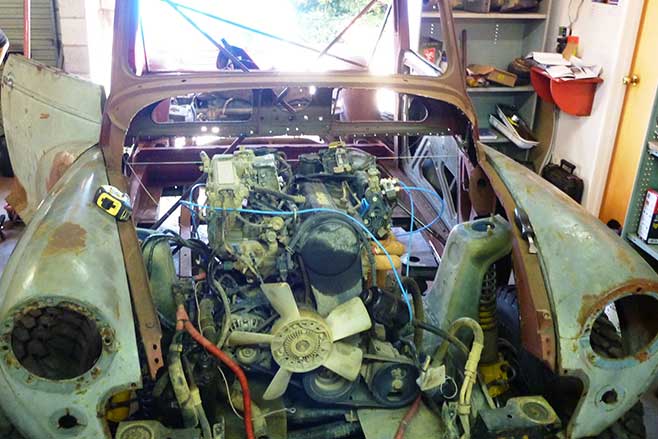 Meanwhile, Shane had varnished the wood and somehow managed to convince his partner that a romantic weekend away was in order. Off to Waipu Cove they went, where Shane met a bloke who had four Morris vans in his back paddock. Shane’s research had revealed that the back-door hardware from a Traveller is as rare as rocking-horse poo, but he thought the van’s back-door mechanisms could be modified to fit the Traveller.

The project was starting to take shape, but Shane still hadn’t managed to secure a roof or side panels for the wooden frame. Eventually he tracked down a bloke who was modifying his own Morris Traveller (with a V8 no less!) and convinced him to loan out that vehicle’s panels so Shane could make a mould with which to construct his own carbonfibre copies. Shane’s mate Nina, a carbon engineer, came up with a new laminate design, and then another mate Richard, a boat builder, agreed to help with the construction of the panels. After plenty of bogging and sanding, the roof plug was ready to make the mould. Some Karate Kid action later (wax on, wax off) and they popped out the beautiful carbonfibre roof and side panels. 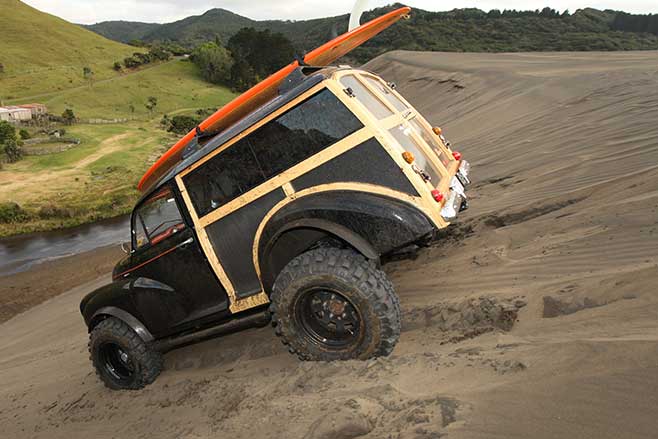 Soon after, another Traveller body popped up for sale in Christchurch. It was in a lot better condition than Old Rusty and although its wooden frame was non-existent, the elusive original back door hinges and locking mechanism were. After consulting with Lance, it was decided it would be cheaper to replace Old Rusty with this Traveller shell.

By the time the new Traveller body was dropped off at Freelance Automotive, the Suzuki body had been removed from its chassis and so the process of cutting and welding began. It wasn’t an easy task and Lance had to spend considerable time on the conversion to ensure it would be roadworthy.

By now, Shane had discovered eBay and was delighted to find that these days you can buy more spare parts for a Morris Minor Traveller than when they were in production! He was in heaven and his internet bill soared. He purchased various rubber seals and hinge refurbishment parts, as well as badges for his new orange cheese-cutter cap that would help him to blend in with the real Morris Minor enthusiasts. 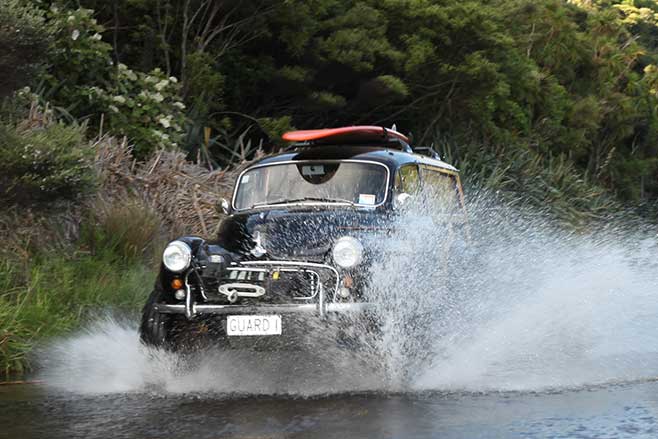 Then, in another stroke of luck, Shane’s partner had to go to England on business, so he jotted down a list of parts for her to bring back including a set of indicator and brake lights, and new back-door handles for the Traveller.

Once Shane had stripped all the parts from the two-door that he needed he sold the remainder, as well as the body of the Suzuki, to recoup some more costs. Cash in hand, he ventured out to Alu-Tech Vehicle & Marine Windows for some custom sliding windows for the back of the Woody. Much more high-tech than the originals, these new units have all-in-one frames with drain holes and tinted glass.

Shane then headed up to Helensville to check on Lance’s progress. They discussed seat positioning, cutting away the wheel arches for big off-road tyres and strengthening the chassis. Shane was concerned about the integrity of the wooden body parts if there was too much chassis twisting when driving off-road. After all, the Suzuki was plenty capable in the rough stuff, with crawler gears, front and rear ARB Air Lockers, Calmini three-inch suspension lift and 31-inch Simex tyres. 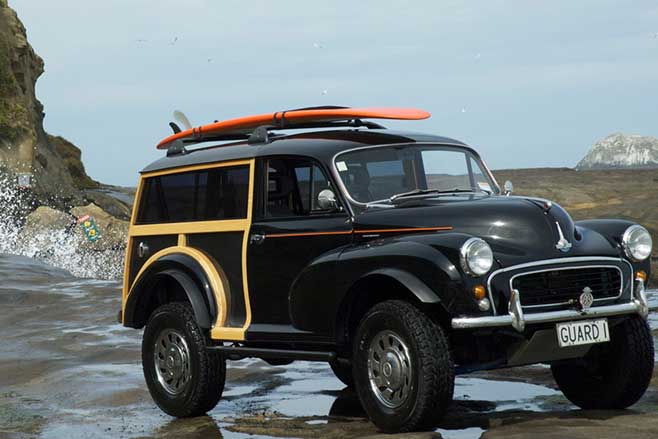 Quite a few months later, all the fabrication was finished and the Morrie was off to the paint shop. The boat builder helped to fit the windows, carbon panels and roof to the wooden frame, which was then attached to the newly-painted body. The shiny chrome lights, trim and handles came out of storage and went on. Then the confusing job of trying to mate the Suzuki’s wiring loom to the Morrie’s lights and other electrical components was tackled.

Finally the key was turned and the old Suzuki donk burst into life. Shane then applied for LVV certification (registration) and the 4x4 Woody passed straight up! After a service at Motortech4x4 in Auckland, the final accessory was added: an old school surfboard to the roof. Three years after spotting that Morris Minor Traveller while cruising around the Auckland bays, Shane could at last drive his dream 4x4 Woody to, and on, the beach.

You can get the latest info on all things 4X4 Australia by signing up to our newsletter. 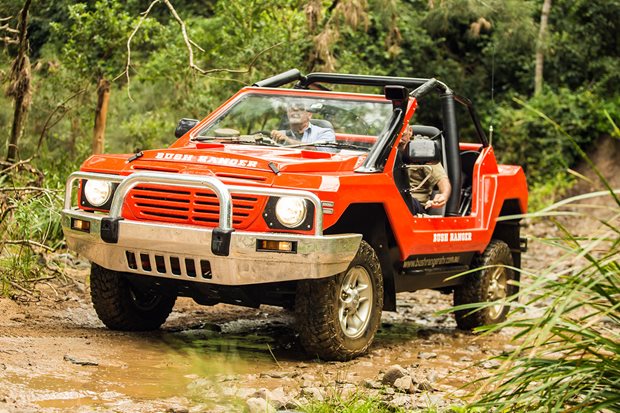 The Bush Ranger may not be the most civilised machine, but it is a 4WD of great competence, with go-anywhere character 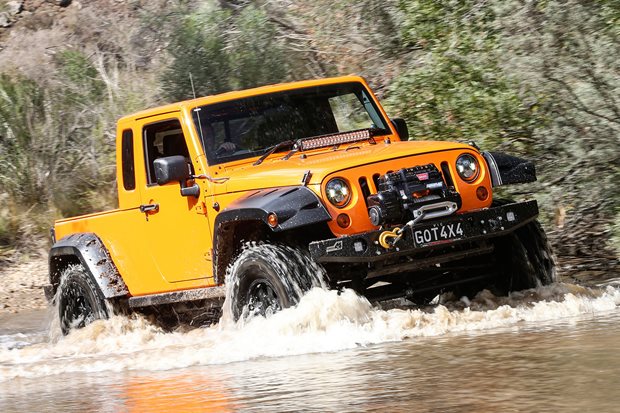 Forget your Hiluxes and Rangers, this custom-built Jeep Wrangler ute would be the duck’s guts – if Jeep had the smarts to build them. 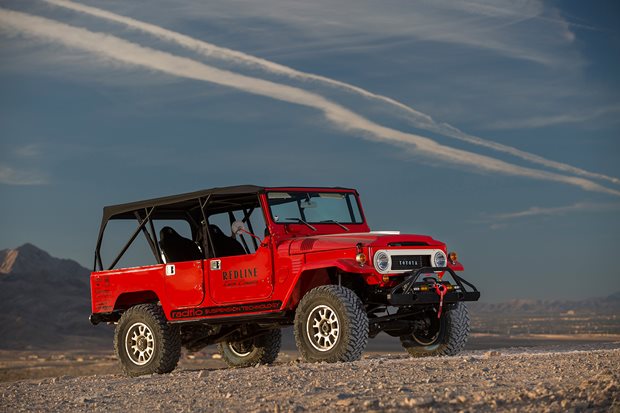 Fancy a four-door 40 Series LandCruiser with all the modcons? Meet the amazing Redline FJ-Ute