Fast Clios have always been among MOTOR’s favourite hot hatches.

Models like the Clio II 182 Cup and Clio III RS 200 offered all the fizz and effervescence of a freshly opened bottle of Schweppes, the screaming atmo engines and playful handling offering a truly red cordial driving experience.

When Clio IV arrived in late 2013, it was more like a cappuccino – still capable of delivering a shot of adrenaline, but in a more mature, refined fashion. It’s proved a popular approach; enthusiasts might scoff at the dual-clutch ’box, turbo engine and five-door body, but buyers aren’t fussed, Australia now the second biggest Clio RS market globally with more than 1500 sold.

Popular it may be, but we’ve been a little underwhelmed by this new grown-up Clio, though to be honest we probably need to discard those fond memories of its predecessor. Help may be at hand, however. 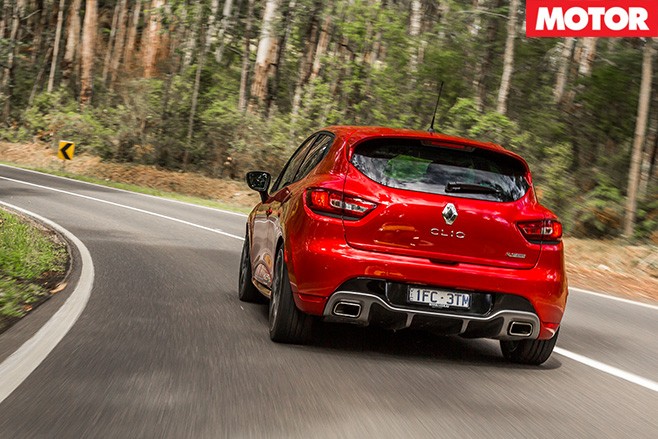 In an attempt to win back some of the party faithful, Renault now offers the RS 220 Trophy, a sharper, faster Clio that aims to recapture some of the old cars’ focus. Just 220 will be offered in Australia at $39,990, a $1990 increase over the current range-topping Clio, the RS 200 Cup Premium.

It’s a modest premium given the extent of the changes, as few areas of the Clio have escaped modification. The 1.6-litre turbo four offers 162kW/260Nm, the extra 15kW/20Nm courtesy of a new intake and exhaust, extra 1psi of boost pressure (now 14.8psi) and a bigger turbo.

A torque boost function also adds an extra 20Nm in fourth and fifth gear. Speaking of gears, the six-speed EDC dual-clutch ’box has been thoroughly overhauled, with 30 per cent faster shifts and shorter paddle throws, though from June 2015 the latter was carried over to the RS 200.

The biggest changes, however, are reserved for the chassis. Ride height has dropped 20mm at the front and 10mm at the rear, rear spring rates are up 40 per cent, there are stiffer dampers with hydraulic bump stops and a 10 per cent faster steering rack. Wheels remain 18s but are now wrapped in Michelin Pilot Super Sports rather than the standard Dunlop Sport Maxxs. It’s a comprehensive overhaul, but before we sample the newbie a refresher behind the wheel of the RS 200 is in order to provide a benchmark.

Renault’s number one aim with Clio IV was to make it more liveable day-to-day and there’s no question it achieved just that. As fantastic as the previous Clio RS was, its hyperactive gearing and jiggly ride made it wearing on the daily grind; the new car is an oasis of calm in comparison. The ride is well-judged, the gearbox is annoyingly hesitant from rest but slips unobtrusively through the gears and turbo torque makes plugging gaps in traffic a breeze.

It’s very undramatic, though. If you just want a quick-ish daily runabout, that’s fine, but if you’ve forked out extra for an RS product, shouldn’t it give you some reminder of what you’ve paid for? Personally I find myself driving everywhere in Race mode using the paddles just to feel somewhat involved.

Most of the blame lies with the engine, which is effective but feels flat and lifeless with little reward to revving it to the 6500rpm limiter bar a load of turbo whoosh. Compared to similarly-sized units in the likes of the Fiesta ST or Peugeot 308 GTI the Renault’s M5Mt seems, well, dull. Thankfully, when you venture beyond the city limits it’s quickly apparent that though the engine department has dropped the ball, Renault Sport’s chassis engineers are still top notch.

The Clio RS comes alive when driven hard, strong brakes, accurate steering and a lively yet easily controllable chassis ensuring it relishes a thrashing. The nose will push wide if you’re greedy with the throttle but find the sweet spot and you can float the car into corners under brakes with a hint of oversteer, even within the constraints of ESP.

Suddenly the engine is merely a tool for transporting you from corner to corner. If the RS 220 can deliver a similar level of handling entertainment while adding some firepower under the bonnet, it could be something special indeed.

Swapping into the 220, it takes a while to really hone in on any differences; the changes have been extensive, but we’re mostly talking 10 per cent here and there rather than any drastic alterations. For example, the extra grunt shaves just 0.1sec off the claimed 0-100km/h time (now 6.6sec) so the biggest difference in the engine is a little extra growl at middling rpm before hefty helpings of turbo rush once again dominate the soundtrack at higher revs. 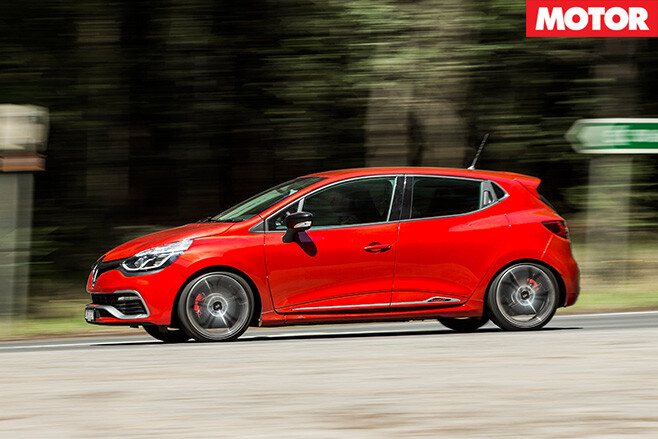 Similarly, while there’s no doubt the gearchanges are snappier – the reduction in shift time makes the RS 220’s Normal mode as fast as the RS 200’s Race – the process is still somehow unsatisfying. It’s difficult to pinpoint precisely why, but part of the reason must be that while the shifts themselves are faster, there’s still a slight delay between requesting a change and it occurring, especially on downshifts, whereas the best dual-clutch ’boxes respond virtually instantaneously.

The gear ratios are also all over the shop; even with the RS 220’s higher 6800rpm cutout in the first three gears, first runs to just 50km/h and second is done by 80km/h before a big jump to third, which stretches to 122km/h.

On a typical twisty road, swapping frequently between second and third gear, often neither is ideal for the corner you’re tackling. It’s a problem exacerbated by the paddles being fixed to the steering column, as you’re frequently grasping at air when you need an upchange on the exit of a corner.

Really, the Clio RS – both 200 and 220 – is crying out for a manual transmission with sensible ratios. Just such a gearbox exists in the Nissan Pulsar SSS, which shares the Clio’s engine, so there seems little reason not to at least offer the option, just as VW now does with the Polo GTI. 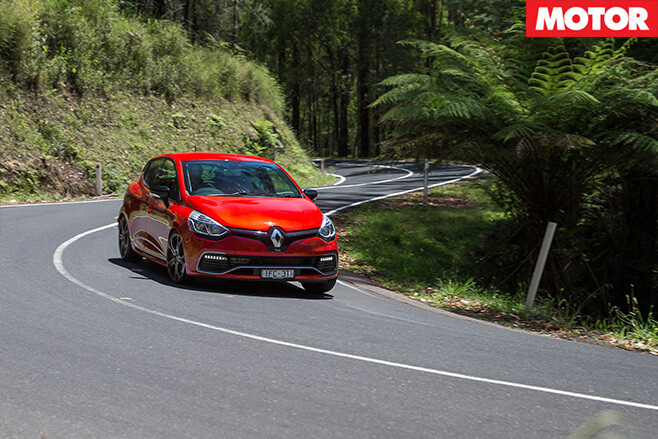 No doubt the vast majority of sales would still be the self-shifter, but the Clio would be a better car for its inclusion. And don’t mistake this as the outdated ranting of some automotive luddite; some cars work brilliantly with a dual-clutch ’box, but the Renault isn’t one of them.

Perhaps unsurprisingly, with so much attention focused on the chassis, it’s here the changes are most apparent, and the news is mostly positive. With Michelin Pilot Super Sport rubber at all four corners, the Clio has impressive levels of grip, but the severe stiffening has also endowed it with a serious dose of attitude. The RS 200 is lively but the RS 220 is even keener to rotate the rear, which is entertaining in second gear corners but can get the heart racing in third, especially when it skips off a bump and needs quick correction.

Add these heightened cornering capabilities to its increased straight-line speed and you have a car that can dispatch a tricky road at huge pace, and will likely only heighten the RS 200’s already impressive circuit capabilities, however the added stiffness has had a seriously detrimental effect on the Clio’s ride quality. This is a very firm car; probably no more so than the Clio III RS 200, but it is really borderline for day-to-day use and after 300km photographer Jacobs and I are both keen for some respite. All of which leaves the RS 220 as a fairly confusing proposition. It’sundoubtedly faster, sharper and more focused than a regular RS 200, but Renault seems to have enhanced the Clio IV’s strengths without really addressing its weaknesses; Peugeot’s 30th Anniversary transformation of the 208 GTi was much more effective at improving that car as an overall package.

There’s also the issue of price. While good value in comparison to the Cup Premium, at $39,990 the RS 220 sits perilously close to cars from the segment above such as Volkswagen’s excellent Golf GTI, Ford’s entertaining Focus ST and the Clio’s brilliant bigger brother, the Megane RS265. In this context it doesn’t really stack up and we can’t help but feel the base Clio RS 200 Sport at $30K offers the most entertainment for your outlay and remains our current favourite.

The clio’s M5Mt engine was co-developed with Nissan who install it in the Pulsar SSS and Juke among others. Oddly, it feels (and sounds) very different in its Japanese applications. 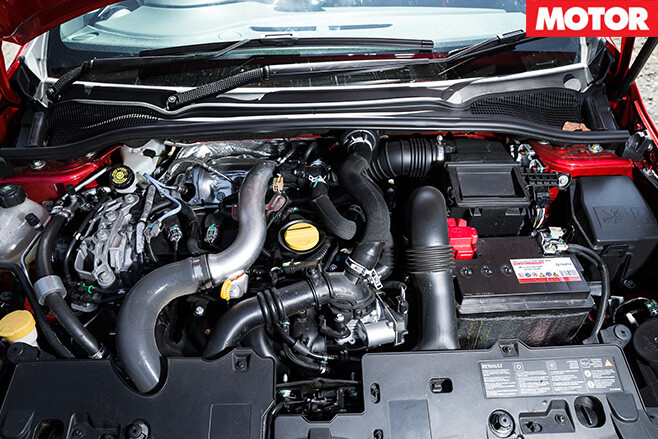