LAND Rover’s all-new Discovery promises higher levels of equipment and refinement and a model for all buyers from its 13 variant line-up.

For the first time in the nameplate’s long history the Discovery will be offered with a single-range transfer case, and a two-speed transfer case will be optional across most models.

Land Rover has always sold the Discovery on its breadth of ability; the fact that it could be a luxury wagon, suburban tourer and capable off-roader all in one. The Discovery 3 and 4 filled that role like no other 4x4, but for the fifth-generation model the brand seeks to broaden its appeal to a wider market and more buyers globally. 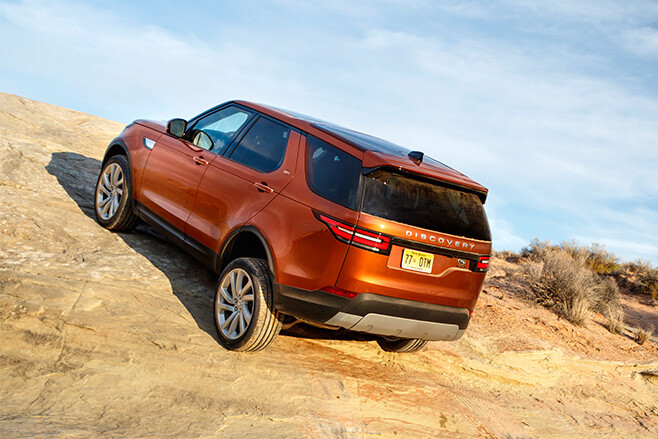 The purposeful, functional and, let’s admit it, boxy styling of the D3 and D4 weren’t to everyone’s liking, and that was the first thing the designers looked at when putting pencil to paper on the new model.

“That was a design that didn’t resonate with a lot of people, it was very polarising,” said Land Rover’s current head of design, Gerry McGovern. “All the vehicles that we create now need to sell a certain amount in order to create the volume so we can get the investment back and invest that in the future.”

So the new Discovery had to have more mass appeal and sit well within the ‘new’ Land Rover family, but the style of vehicle presents some challenges. 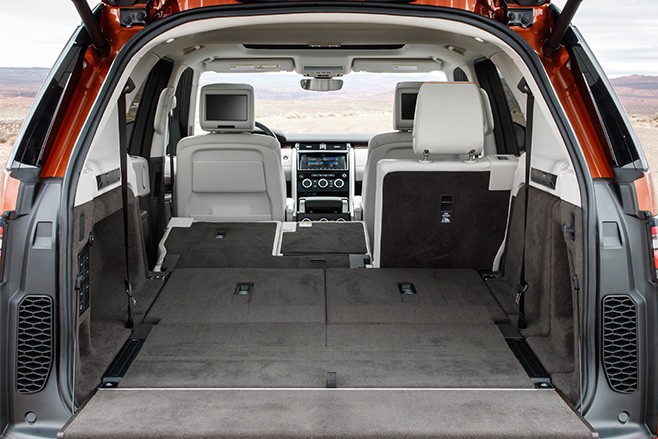 “When you’re doing a vehicle this size, with seven full-size adults, that is a big package, and to package that successfully and still make it look dramatic is a difficult task,” said McGovern.

So the new Disco looks more generic in a Land Rover way, with closer ties to the Ranger Rover, Rangie Sport and the smaller Discovery Sport vehicles. This is the new Land Rover, so you’d better get used to it.

In another first for the Discovery, the new model rides on a monocoque chassis made from aluminium. It shares this platform with the Rangie and Rangie Sport but, keeping more in line with its off-road-capable usage, the suspension components on Disco are steel and not alloy as they are on the Rangies. The use of lightweight alloys on the chassis and body contribute to a weight saving of up to 480kg on some specification variants, specifically the four-cylinder engine with single-range transfer case. 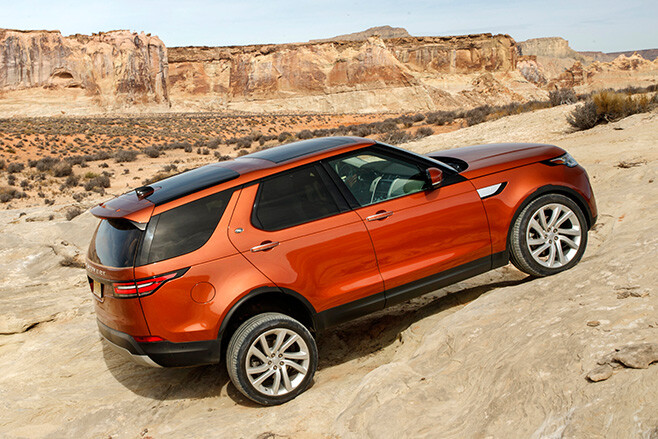 Yes, that’s right, we said four-cylinder. For the first time since the Series 1 Disco, a four-cylinder engine returns and is expected to make up the bulk of sales on the new model in Australia. It’s the latest version of Land Rover’s 2.0-litre Ingenium diesel engine and will be available in two states of tune for the Discovery. The base Td4 engine makes 132kW/430Nm, while the Sd4 puts out a handy 177kW/500Nm. There is also a traditional V6 diesel engine, which is an evolution of the ‘Lion’ TDV6 from Ford, and it makes 190kW/600Nm. All engines are backed by an eight-speed auto from ZF, and there will be no petrol engine offered in Australia.

Our first drive of the Series Five Discovery was limited to the Sd4 and Td6, both in HSE Luxury trim, at the international launch in the USA. The vehicles will go on sale in Australia in July – these two variants will be released first, while the entry level Td4 S models will land a couple of months later. That Td4 S will represent an approximately $4000 lower entry level price for the Discovery in Australia when it lands at $65,960 in five-seat trim. 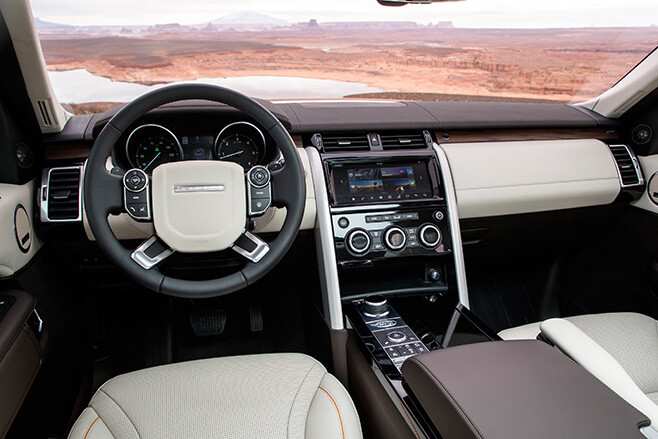 A two-speed transfer case will add $920 to the price of your Disco; a locking rear differential adds $1080; Terrain Response 2 a further $2060; and height adjustable air suspension another $2060. So gearing the Discovery up for all-terrain use adds up pretty quickly, and there’s an extensive and complex list of options and packages available to blow the cost way out.

The Td6 remains the choice for 4x4ers looking for an adventure vehicle. The Sd4 is nice and will probably suffice for 80 per cent of buyers, particularly new buyers to the nameplate, but loaded up and/or towing we reckon the six is the go. All engines are rated to haul a 3500kg braked trailer, but after driving an unladen Sd4 on the highway we reckon it’ll be slow going with a load. 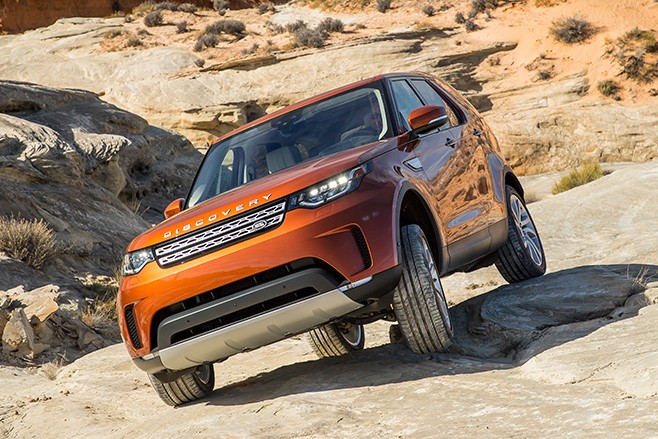 The Sd4 is a sweet touring engine and nice around town, it’s quiet and refined from inside the cabin and responds well to throttle inputs. It was only when overtaking at highway speeds that it felt wanting and, again, that was with just two passengers on board. Fuel use is rated at 6.3L/100km.

The familiar Td6 engine responds extra well to the lighter body and chassis of the new model. It gets along with urge and purpose and would cope much better with the demands of loads and long-distance travel. It is rated to 7.2L/100km consumption and the fuel tank is a paltry 85 litres for the Td6 (77 litres for the four-pots).

Our test vehicles were both fitted with two-speed transfer cases and all the off-road hardware on offer. Terrain Response 2 adds an Auto mode to the existing modes for Normal, Grass Gravel Snow, Mud & Ruts, Sand, and Rock Crawl. The Auto mode reads the terrain and driving style to select the right mode for the conditions and take the guesswork out of it for the driver. It’s a system that makes even the most inexperienced off-roader look and feel like an expert. 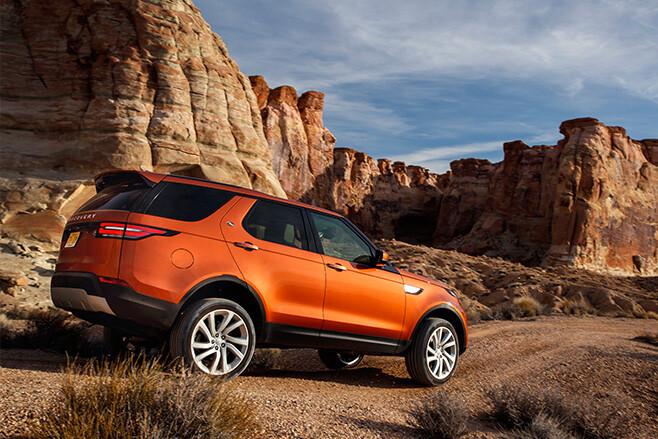 The suspension is fully independent and rides comfortably on the highway and sandy desert tracks we sampled it over. The test cars were fitted with 20-inch wheels and it looks as though the smallest offering from Land Rover will be 19s. Tyre choices for these 19s have a bit more sidewall height than in the past, with both 235/65 and 255/60 19s available as per the Range Rover Sport. We’re yet to determine if a smaller diameter wheel rim can be fitted to give better tyre choices.

With the suspension cranked up and low range selected the Discovery fared well on a tricky little rock-crawl course. The electronic traction control and automatic centre and rear diff locks are beautifully calibrated to maintain traction and forward momentum. Another huge plus over the previous models is that with the suspension in the raised position it now doesn’t automatically drop down until 80km/h, up from the previous 50km/h which was real nuisance. Also, with the suspension raised, the wading depth is a best-in-class 900mm. 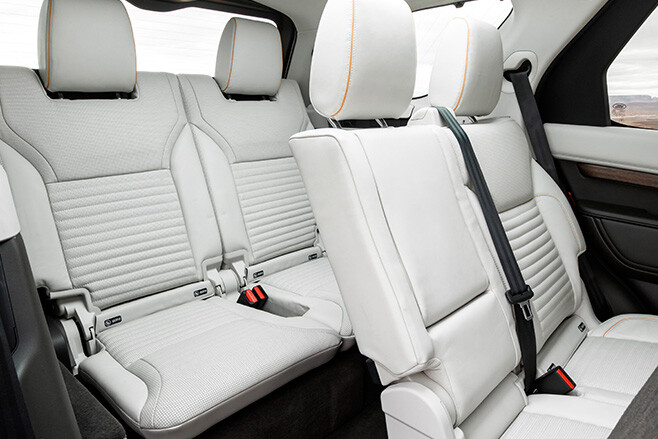 The new Discovery is a very different vehicle than the one it replaces, yet it retains the accommodating seven-seat cabin, quality ride, high levels refinement and competent off-road ability the model is known for. It’s what McGovern calls “lifestyle enabling versatility”, and when you add these attributes to the wider range of variants which will appeal to more to non-off-road users, the new Disco should be a sales winner for Land Rover. We’re looking forward to driving it on familiar Australian tracks later this year to get a better feel for its abilities.