Volkswagen’s much-anticipated V6 diesel Amarok has arrived and with it comes a new benchmark in 4x4 dual-cab utes.

Initially available in Ultimate and Highline specification and only as an eight-speed automatic, more V6 models will arrive next year including a 6-speed manual with dual-range, part-time 4x4.

The V6 engine attracts a very reasonable $3000 premium over the other Highline and Ultimate automatic models. The TDi550 Highline is $59,990 while the Ultimate tops the range (for now) at $67,990.

While the two new V6s will sell against the existing four-cylinder models for the time being, next year will also see shrinking of four-cylinder range from four to two grades, Core and Core Plus, while the single-cab 4x4 may also be phased out. 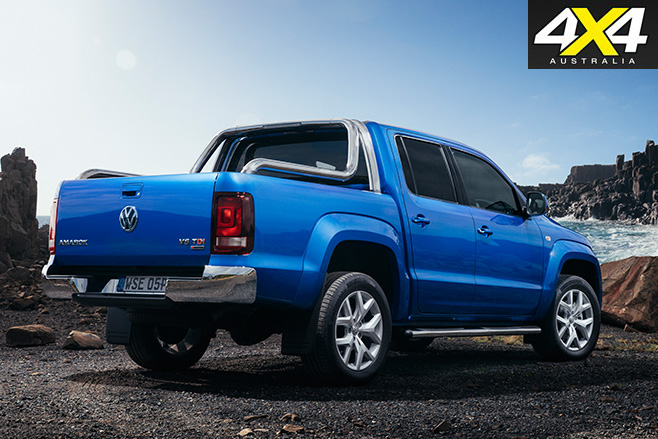 The reduction of the four-cylinder range will make way for an expanded V6 range including the special-edition Aventura due mid year. Expect the V6 to also make it’s way down the model grades but in a lower state of tune from the current 165kW/550Nm.

The engine in question is a long-serving VW family design that’s used in the Touareg as well as the Porsche Cayenne and Macan and Audi Q7 although it’s been beefed-up for the Amarok application.

Changes include a larger sump for added oil capacity and stronger pistons especially designed to cope with the demands of high-load, low-rpm operation. The Amarok’s V6 also comes with the latest emission tech including AdBlue SCR and a DPF and is already ahead of the game with regards local emissions compliance. 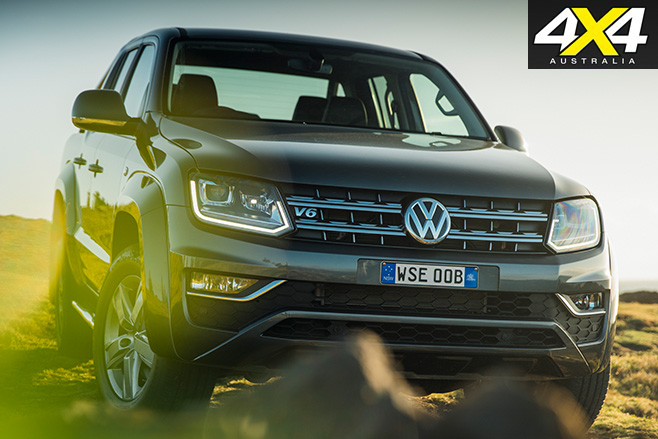 Unusually the engine is a 90-degree V6, rather than the more common 60-degree V6. It’s a DOHC, 24-valve design where the cams are chain and not belt driven and employs common-rail injection (@ 2000bar) and a single variable-geometry turbo.

For the time being the V6 only comes with a ZF eight-speed automatic and single-range full-time 4x4 in a system that’s similar to what’s currently available with the four-cylinder engine although the gearbox is a heavier-duty unit to cope with the extra torque of the V6. The 4x4 system uses a self-locking electronic-clutch centre diff that provides a nominal 40/60 front to rear torque split on high-traction surfaces but can vary the torque split as needed.

While the engine claims 165kW from as low as 2500rpm and extending up to 4500rpm, it also has an overboost function that bumps the maximum power to 180kW to provide more urge in overtaking situations and the like. The overboost is activated on throttle applications of 70 percent or more and for periods up to 10 seconds at a time. 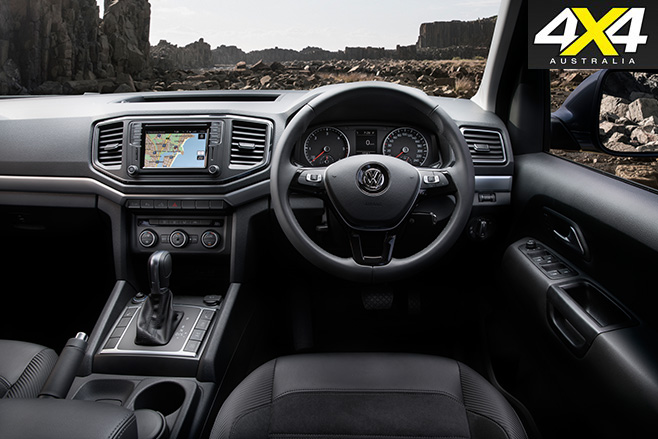 DRIVING
On the road the Amarok V6 is effortless at low and middle revs and punchy when needed. Pedal to the metal it will sprint from a standstill to 100km/h in just 7.9 seconds something that will leave even the best of the competitors utes, none of which will even break 10 seconds for the same sprint, back in its dust. Perhaps more appealing is the smooth and refined nature of an engine that sounds very un-diesel like with little or no telltale diesel rattle.

The refinement of the engine is matched by the super-slick ZF automatic that provides a wide spread of ratios for everything from low-speed rock crawling to effortless highway cruising. Thankfully the overall gearing isn’t excessively tall (as seems to be the trend today) with top gear giving around 60km/h/1000rpm. With maximum torque on tap at 1500rpm it means the engine doesn’t even think about slipping out of top gear on undulating country roads at legal highway speeds. 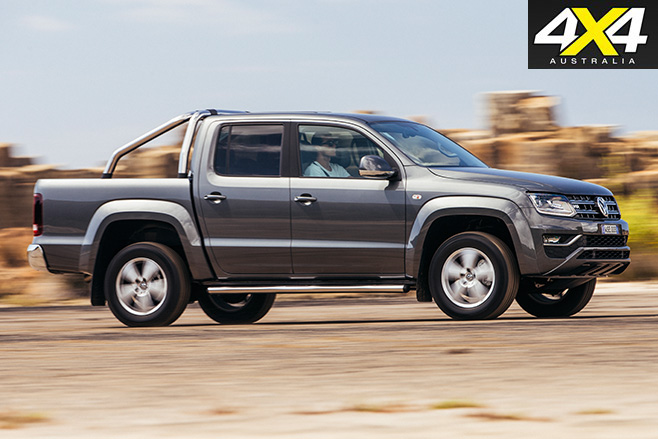 As with the four-cylinder Amarok with the eight-speed auto and single-range 4x4, the V6 can go from highway cruising to steep off-road work without having to touch a lever, switch or dial. There is a ‘Off-Road’ button that tweaks the gearbox-shift and ETC protocols as well as activating the hill-decent control, but left to its own devices the Amarok largely works it out itself anyway.

The off-road section of VW’s launch drive was moderately tough in parts but not sufficiently tough to require the rear locker to be engaged, which in the case of the Amarok keeps the traction control active on the front axle. On all competitor utes bar the up-dated Ford Ranger activating the rear locker cancels the traction control on both axles, which means it’s not always helpful.

If the Amarok V6 performs as well in truly difficult off-road situations as the four-cylinder eight-speed then it will be brilliant. Certainly there’s nothing to suggest it won’t be given the gearbox and drivetrain is effectively the same, only beefier. Given the extra torque of the V6 at low rpm, VW techs suggest it’s actually better in the steep stuff than the four. 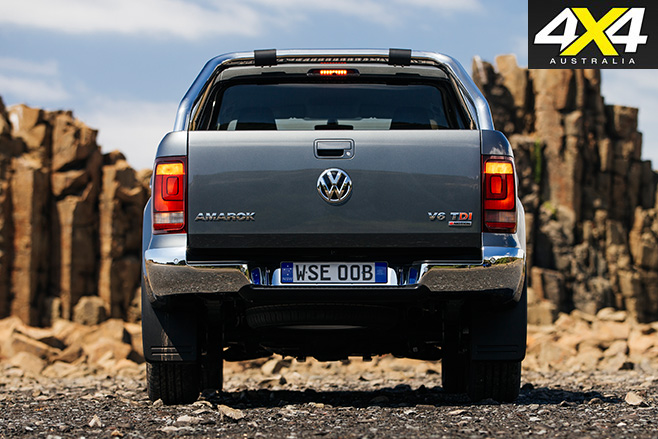 As ever the Amarok offers first-class on-road ride and handing thanks to steering and chassis-balance that’s a cut above the rest of the class. If you want your ute to feel as much like a sports car as possible then this is it.

As standard the Highline comes with 18-inch alloys and the Ultimate with 19s but the launch vehicles were equipped with factory 17s fitted with Pirelli Scorpion ATRs (245/65R17s) as used on the current Core model.

The 17s can be fitted despite the V6 having bigger front brakes than the four-cylinder, now the biggest front brakes in the class. Disc brakes are also fitted at the rear which is a rarity in this class of ute. 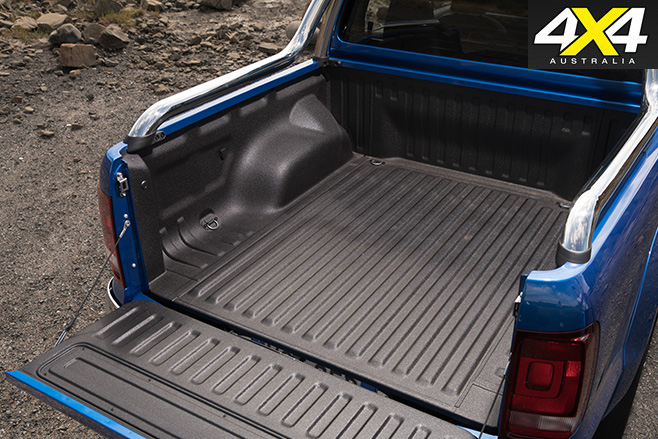 The towing capacity remains changed at 3000kg but the GCM as been beefed up to 6000kg to match the Ranger and the BT-50 as a best-in-class figure. With the higher GCM, the V6 can tow its max and still have a decent payload in the tray, which is not the case with the 3500kg tow-rated utes. VW also offers a factory towbar while a bullbar is also in the works for next year.

Things like the spacious cabin (the widest in class) and the only tub in the class that can carry a full-sized pallet between the wheelarches remain largely unchanged although the cabin and equipment details have been changed, as has the front-end styling details.