FORD’S Ranger Wildtrak is a handy on- and off-road mauler, but can it cope with two sandbags in the tray and more than 2.5-tonnes of caravan strapped to its towball?

And not just any caravan, but a class-leading Avida Topaz 7052SL 50th Anniversary edition.

To find out, 4X4 Australia sent it on a 200km loop south out of Sydney on varied roads including inner-city roadblocks, two-lane highways and freeways, winding secondary roads, and plenty of steep climbs and descents.

The Ranger got down to business with its oodles of power and torque (147kW/470Nm) making relatively light work of the caravan. On the road, the Ranger is relaxed and quiet at a steady cruise, although the inline-five lets you know when it’s working hard. The six-speed transmission seems to have a big ratio gap between the crucial second and third gearchange, and it takes a while to up-shift after hillclimbs level onto flat terrain. Using Sport mode makes the Ranger more eager to downshift, but it also holds gears for longer. Manual mode works best, especially for engine braking – the transmission has a predictive mode that downshifts when it senses it is necessary (which works well when not towing), but it doesn’t downshift enough when there’s something weighty on the towball.

The Ford has a wheelbase of 3220mm and a rear axle-to-towball stretch of 1330mm to provide a good foundation for stable towing. Also encouraging is the lack of front body rise (just 10mm). Rear suspension compression is more significant (a droop of 80mm).

The Ford is only marginally affected by crosswinds, large trucks (with their destabilising bow wave of air) or yaw (sway) when changing direction or braking. Body pitching is minimal and the Ranger rides smoothly with the big box on its tail. The Ranger’s reversing camera screen incorporates a centreline marker to help line up the towball, and it works really well. Helping ease sway anxiety is the Ranger’s standard trailer sway control, although we never needed to rely on its help.

Making life easier for those who need to power accessories in their caravan, the Ranger comes standard with a 12-pin plug. 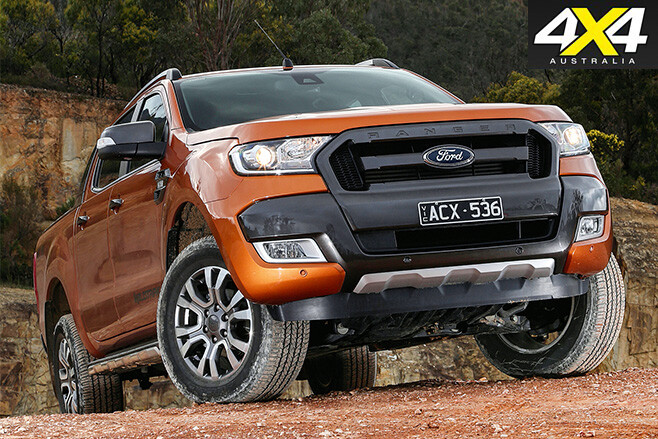 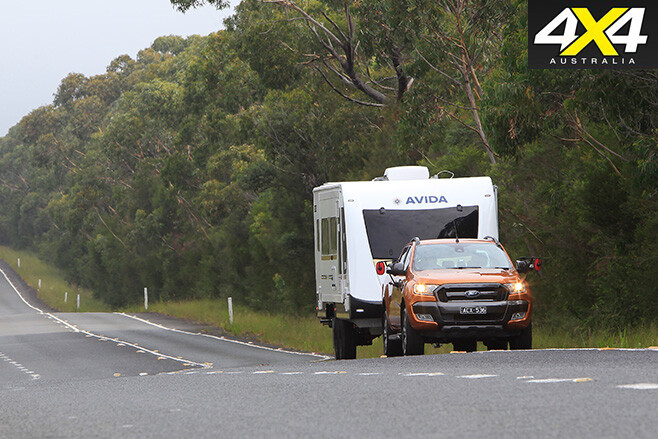 AVIDA has been building RVs since 1965, and to celebrate its 50-year milestone, the company released its new top-of-the-range Topaz 7052SL 50th Anniversary.

This is the company’s first caravan slide-out, and it’s a big one – it takes in almost the whole offside, stretching out just over four metres. Only the bathroom misses out on the 600mm-plus widened living space. The Avida’s composite wall, ceiling and floor panels combine to make a rigid structure, with a steel galvanised chassis (with six-inch RHS longitudinal rails and four-inch drawbar rails) underneath.

The net result of the body and chassis design is great rigidity and lightness. The 2572kg tare weight is light for a ’van of this size and specifications, especially as it’s a slide-out.

The Cruisemaster independent suspension is an asset for a caravan intended for rough-road use, as are the All-Terrain tyres. The kitchen has plenty of room, while the dining area is the size of a small room – there’s a leather-clad offside lounge opposite a slightly wider lounge on the nearside wall. The dining table is secured to the floor in front of the nearside lounge, and there’s plenty of room to get around it to the lounge.

The bedroom is spacious with the slide-out, with ample room to walk around the end to the bed. Opposite the bed on the nearside is one of the Avida’s party tricks – at the press of a button, a flat-screen LCD TV pops out of a narrow cabinet benchtop.

The bathroom is also a good size – there’s a shower enclosure on the nearside, and in the centre sits a ceramic washbasin on a stylish, curved vanity-unit top. A washing machine is under a sliding benchtop further along the vanity. 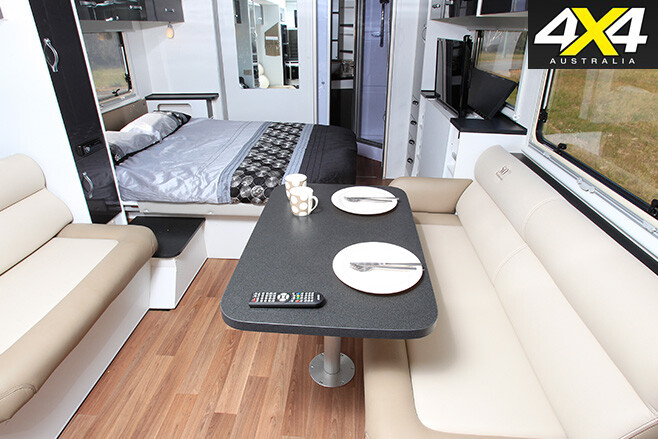 Underneath there are twin water tanks, as well as a greywater tank – a rare commodity in caravans and great for camping, ensuring greywater doesn’t turn the campsite into a mud bath.

The Topaz’s electrical layout is both simple and comprehensive – the master power switch is right next to the door, and there’s an LCD water and power level indicator panel.

The Topaz has Avida’s trademark attention to detail: it has a strong yet light body and chassis structure, and it has one of the longest slide-outs in the business.