Portugal's Sintra region is a haven for royalty. The World Heritage-listed Sintra National Palace was consistently occupied by kings from the early 15th to the late 19th century; the accompanying castle dates back a further 600 years still.

In more recent times, primarily the 1970s and ’80s, Sintra played a crucial in the Portuguese round of the World Rally Championship, motorsport monarchs like Markku Alen, Walter Rohrl, Hannu Mikkola and Michele Mouton mastering the stages, the seas of rabid spectators parting just long enough to allow the passage of screaming Group 4 131 Abarths and bellowing Group B Quattros. 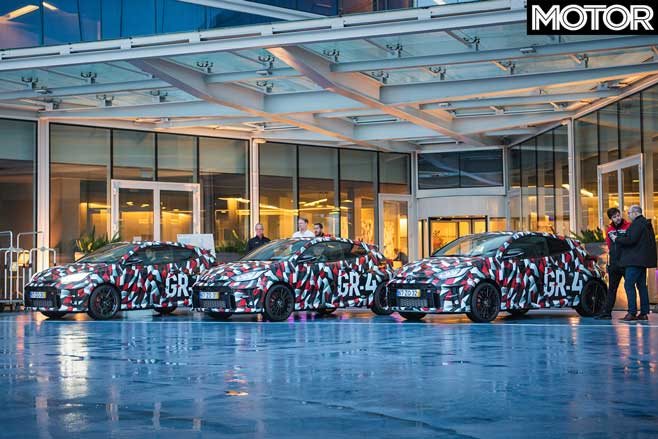 It's apt, then, that Toyota should choose the region for our first taste of its new road-going rally car, the Toyota GR Yaris. If that seems too tall an order for the humble Yaris, consider that the GR will form the basis of the successor to the machine that carried Ott Tanak to the 2019 world title.

The days of the true homologation special are sadly over, but Toyota has thrown not just the kitchen sink but the refrigerator and half the oven at its new Yaris to transform it from an inoffensive city car into an all-wheel drive hot hatch.

It starts with the bodyshell. The GR is the only three-door Yaris, a decision made to provide a stiffer, more aerodynamic base for the World Rally Car. The roofline is lowered 95mm to reduce drag and the roof itself is carbon fibre, an unheard-of addition in this segment. To further shed weight the doors, bonnet and hatch are aluminium, the net result being a 38kg saving over the previous Yaris body-in-white. 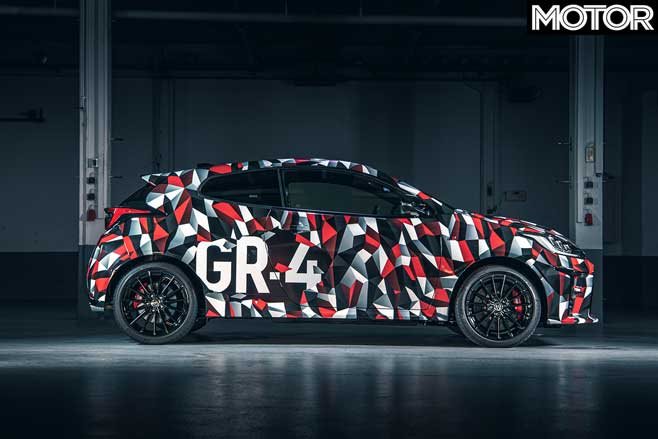 The modifications don't stop there, the GR sharing virtually nothing in common with the cooking version Yaris. The standard car's cheap and easy to package rear torsion beam suspension has been ditched for a four-link arrangement, the dampers and springs have obviously been completely overhauled, wheels swell to 18 inches in diameter wearing 225/40 tyres and cover enormous brakes.

Toyota won't provide the exact sizes just yet, but reveals the front two-piece rotors are bigger than those on the Supra (so at least 348mm) and there are four- and two-piston calipers front and rear respectively. Healthy stoppers for a car that weighs in at just 1300kg.

Where it really gets juicy, though, is the drivetrain. The engine is bespoke to the GR Yaris, a 1.6-litre three-cylinder that benefits from a hefty dose of turbocharging. According to engine boss Atsunori Kumagai: “The three-cylinder is very good [for] response and power compared to four-cylinder,” though its compact size and lighter weight certainly can't hurt. Toyota might have downsized the engine, but it hasn't downsized the grunt. The exact outputs are still a secret, but the GR Yaris will produce more than 185kW/350Nm for a power-to-weight ratio of at least 142kW/tonne. Healthy. 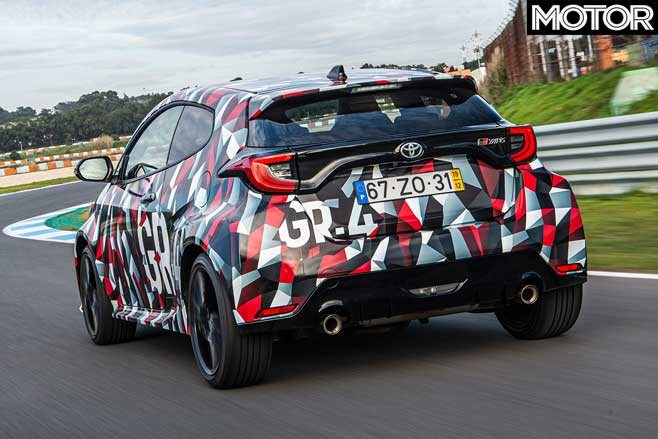 A close-ratio six-speed manual is the only available gearbox, an auto dismissed due to its weight. But what truly sets the GR Yaris apart in the baby hot hatch segment is its all-wheel drive system. Loosely based on that found in the RAV4, drive is apportioned front-to-rear via what Toyota calls a 'high response coupling', using a set of electro-mechanically controlled clutches. There are three modes which vary the base drive split: Normal (60:40), Sport (30:70) and Track (50:50).

Sadly, Toyota Australia has no plans to offer the Performance Pack, Vice President of Sales and Market, Sean Hanley, stating: “We believe the [standard] GR Yaris ticks every box we needed to tick to bring this car to market.” 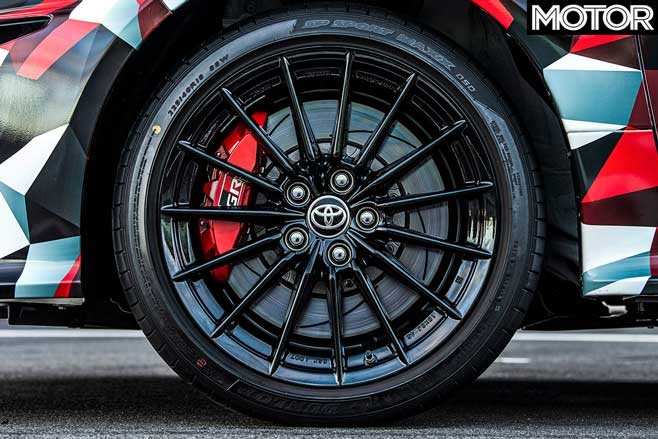 It's an impressive stat sheet and happily one that translates to the drive experience. The engine, in particular, is incredible. According to Kumagai, the “most important point is response for this car.”

Response isn't an attribute generally associated with small, heavily turbocharged engines but the GR's triple feels at least 25 per cent bigger than it is. Flexibility is its greatest strength, charging forward even in higher ratios; fifth gear, 2500rpm? No sweat. This isn't a car in which you'll need to row the gearbox to overtake.

Not that doing so is a chore. The shift is light, accurate and easy to use; it's not quite a Civic Type R, but on first acquaintance it's nicer than an i30 N or Megane RS. At the legendary Estoril racetrack it feels pleasingly quick; on the narrow mountain roads where Alen, Rohrl et al plied their craft it feels seriously potent. The short gearing helps, but the GR's engine also isn't afraid to rev; the redline sits at 7000rpm, though its best work is done by 6500rpm. 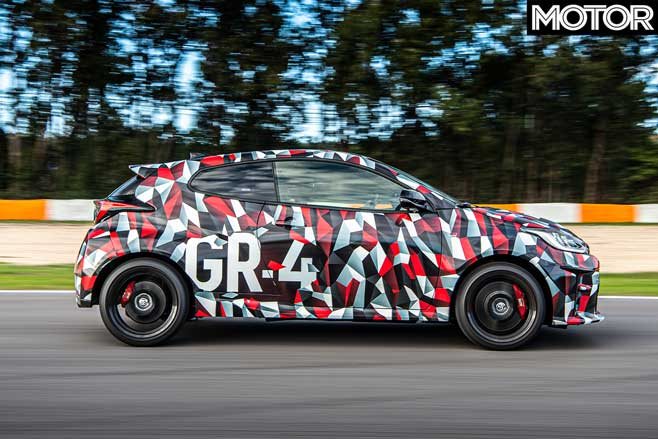 Subjectively, the biggest question mark surrounds the soundtrack; the three-pot thrum is more commonly associated with budget city cars (VW Up, Renault Clio, Nissan Micra) and isn't unpleasant, just a bit tuneless. Some rally car-style pops and bangs would help, but are no longer possible with the latest emissions regulations.

The best insight into the attitude of the GR Yaris engineering team? The fact it retains a manual handbrake, Toyota's European Master Driver Vic Herman laughing: “It can be useful.” Toyota's new hot hatch was tested extensively at the Nürburgring, but its program wasn't limited to tarmac, hitting the snow and gravel with Toyota's WRC drivers behind the wheel. “They have huge experience with differentials,” explains Herman. “It's their main tuning tool.” 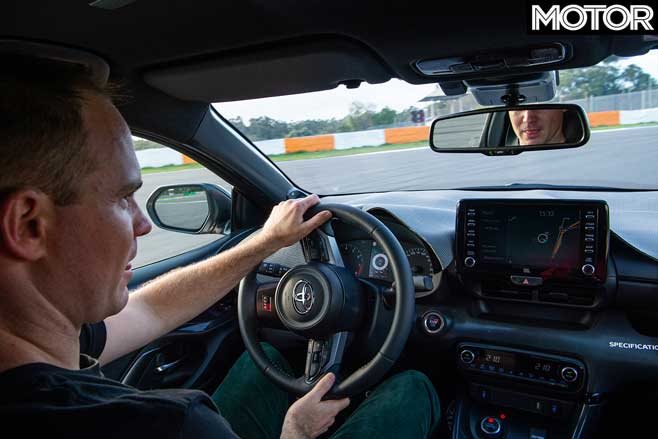 The harder you drive, the greater the similarity between the three driving modes. Sport's 30:70 drive split sounds like an invitation to power oversteer, but once the all-wheel drive system detects wheel slip its priority is to take the necessary steps to regain traction.

Exiting Estoril's super tight chicane the Performance Pack's Torsen diffs prove their worth, the standard car momentarily spinning an unloaded inside rear wheel, though such is the level of grip that it's unlikely to be an issue that would ever appear on the road. 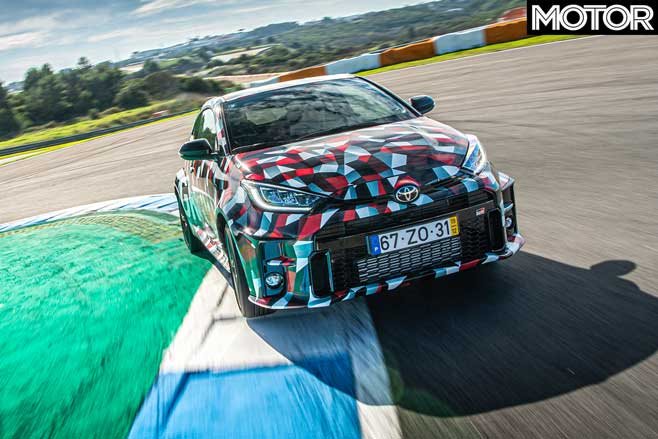 You still have to exercise a degree of patience, but do so and the GR Yaris will tenaciously hold your chosen line. The ESP is far too conservative and there's no halfway-house sport mode, but thankfully my chaperone is happy for it be disengaged for the last couple of laps and the Yaris feels so happy to be free of its restraints.

On the road it just flows. The steering is light and accurate, turn-in crisp and traction absolute, all characteristics that promote confidence. Its size is also of real benefit; the smaller footprint takes up less real estate on the road and the relative lack of heft gives it an agility larger rivals will struggle to match. The static dampers feel nicely judged, too, providing stability and support without rattling your teeth out.

It's difficult to suggest many improvements, but a stronger rear-drive bias would be nice, for it seems the GR Yaris lacks that Focus RS-like ability to rotate the car using the throttle. The details differ, but its overall behaviour is strongly reminiscent of the Audi S1. 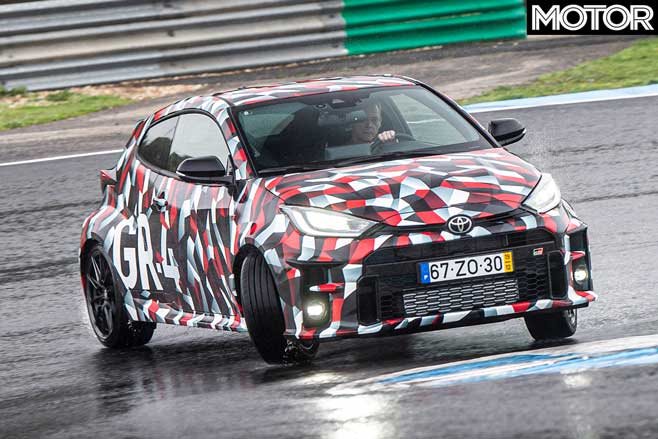 Let's hope the price tag isn't also reminiscent of the $49,990 Audi. Currently, it's the great unknown, Hanley refusing to offer hints on pricing beyond “We understand that the car's got to be attainable.” It's a unique offering; its size suggests a competitive set of Ford Fiesta ST and VW Polo GTI, yet its power and performance puts it closer to the Subaru WRX and Hyundai i30 N.

At $35,000 or so the GR Yaris has the potential to be the hot hatch king, but add $10K and it could be the court jester, talented and amusing but ultimately a bit player. The bang is there, but we won't learn the bucks until closer to the GR's Australian release in Q4 2020. 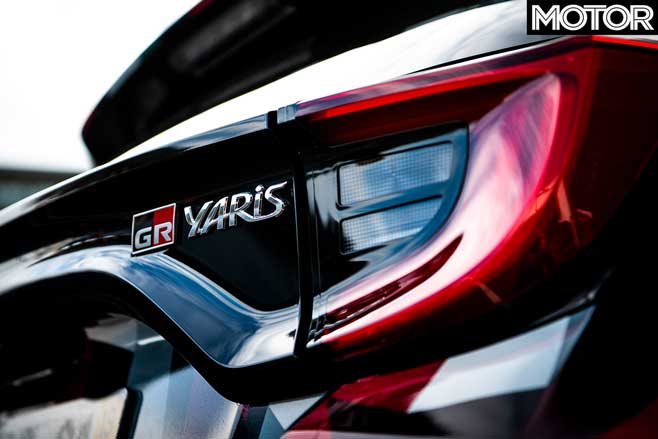 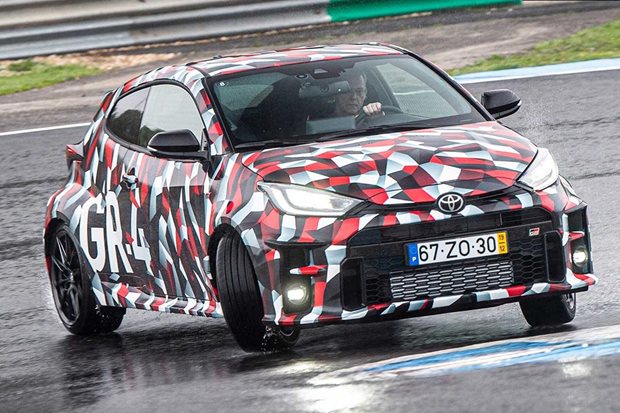 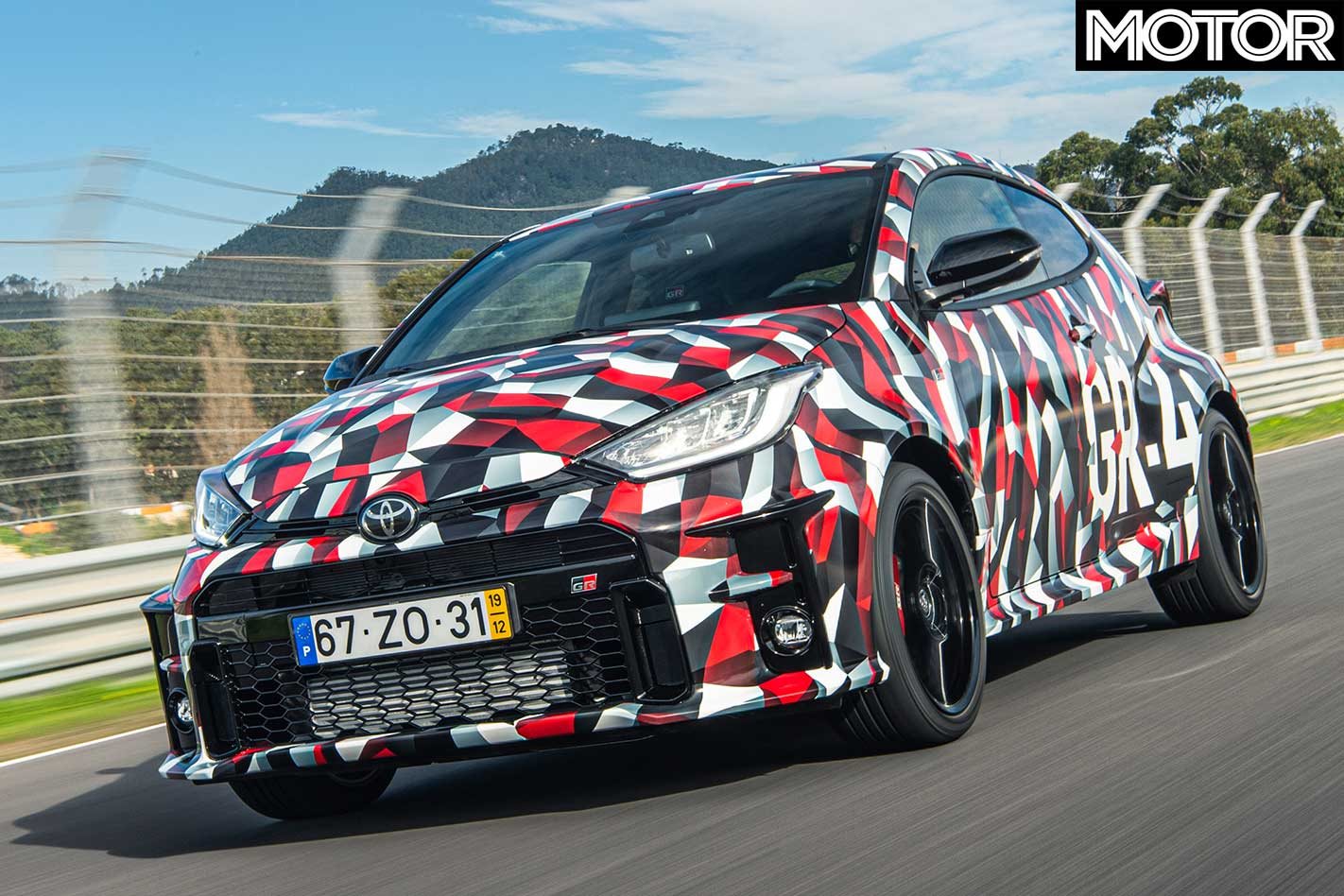 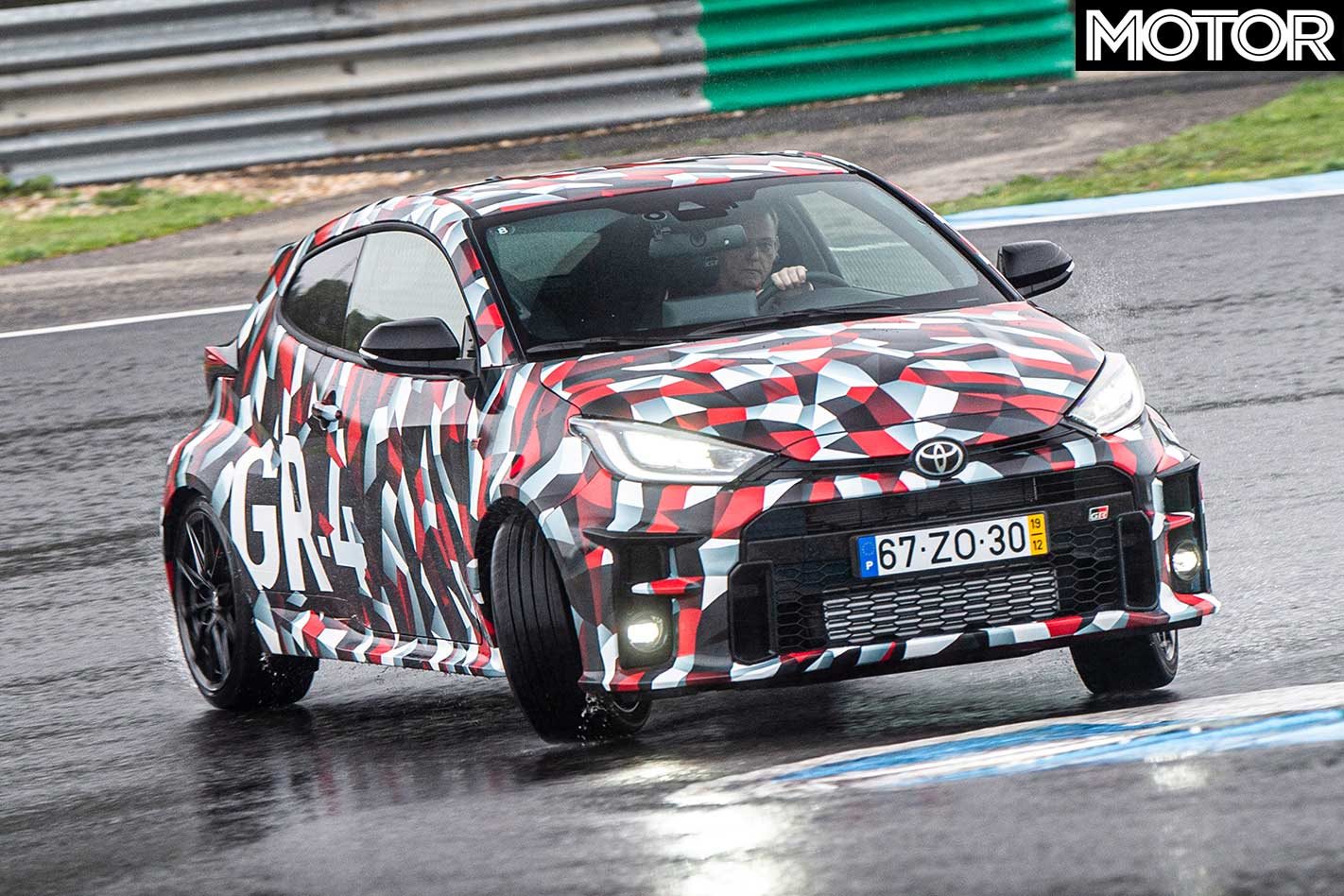 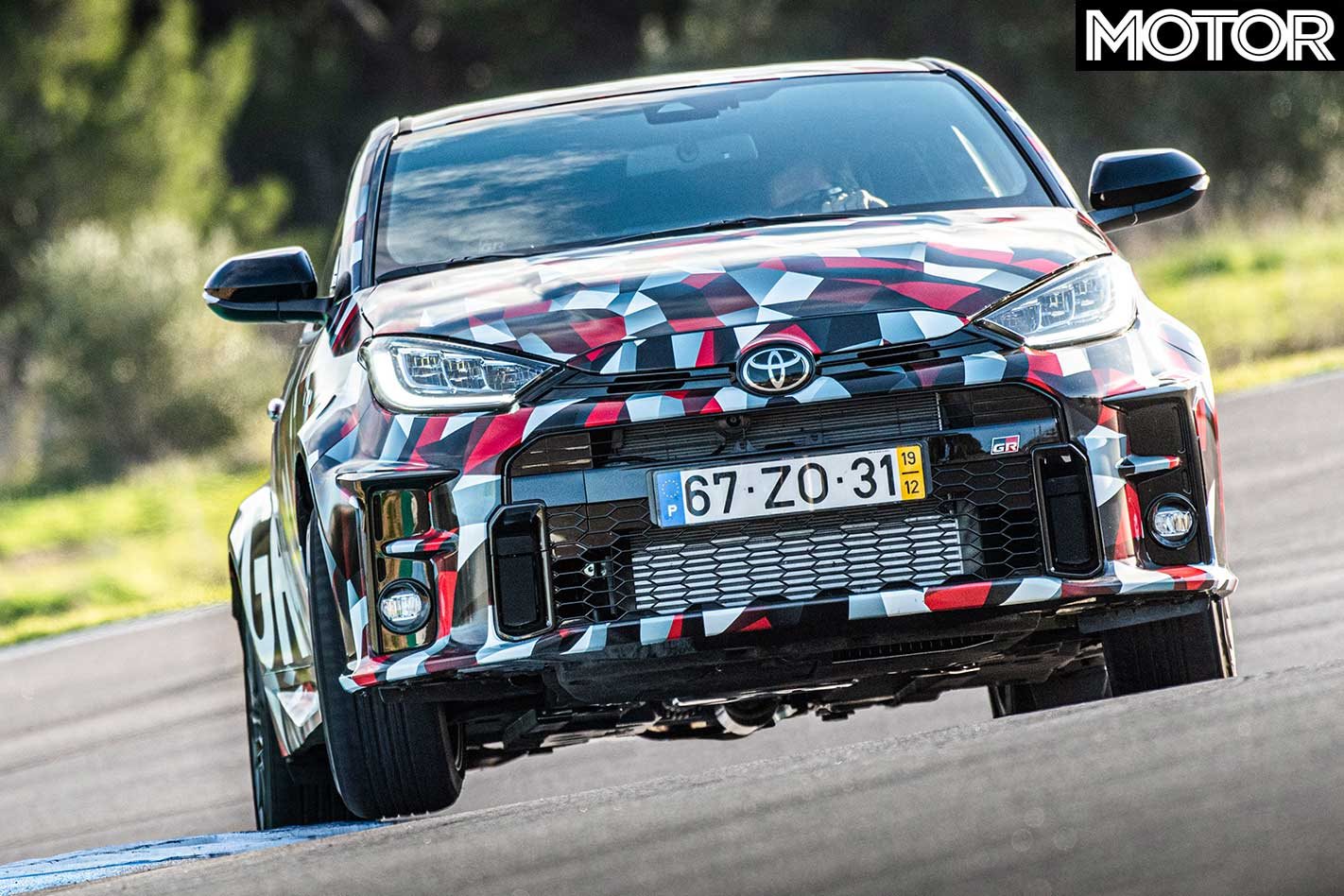 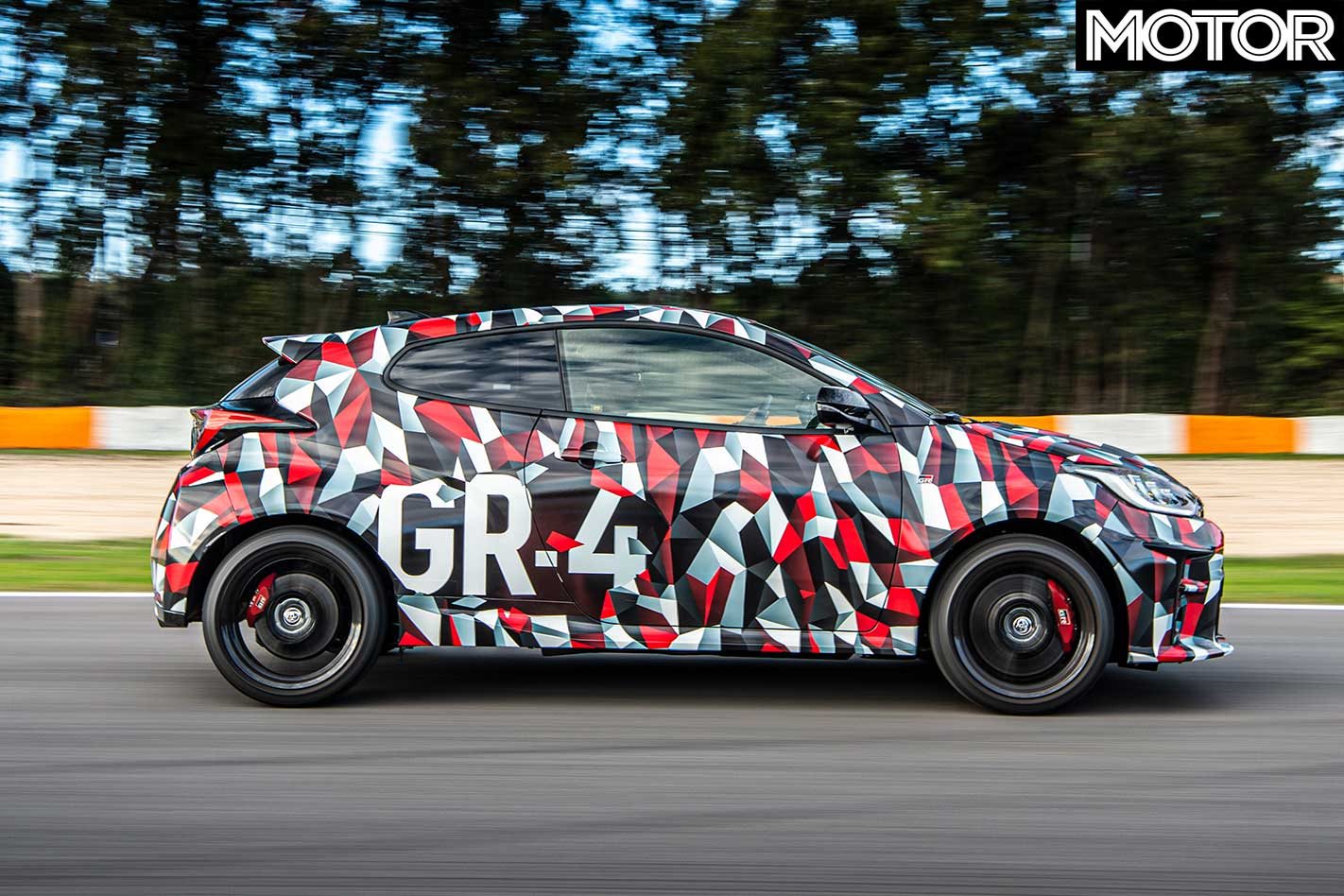 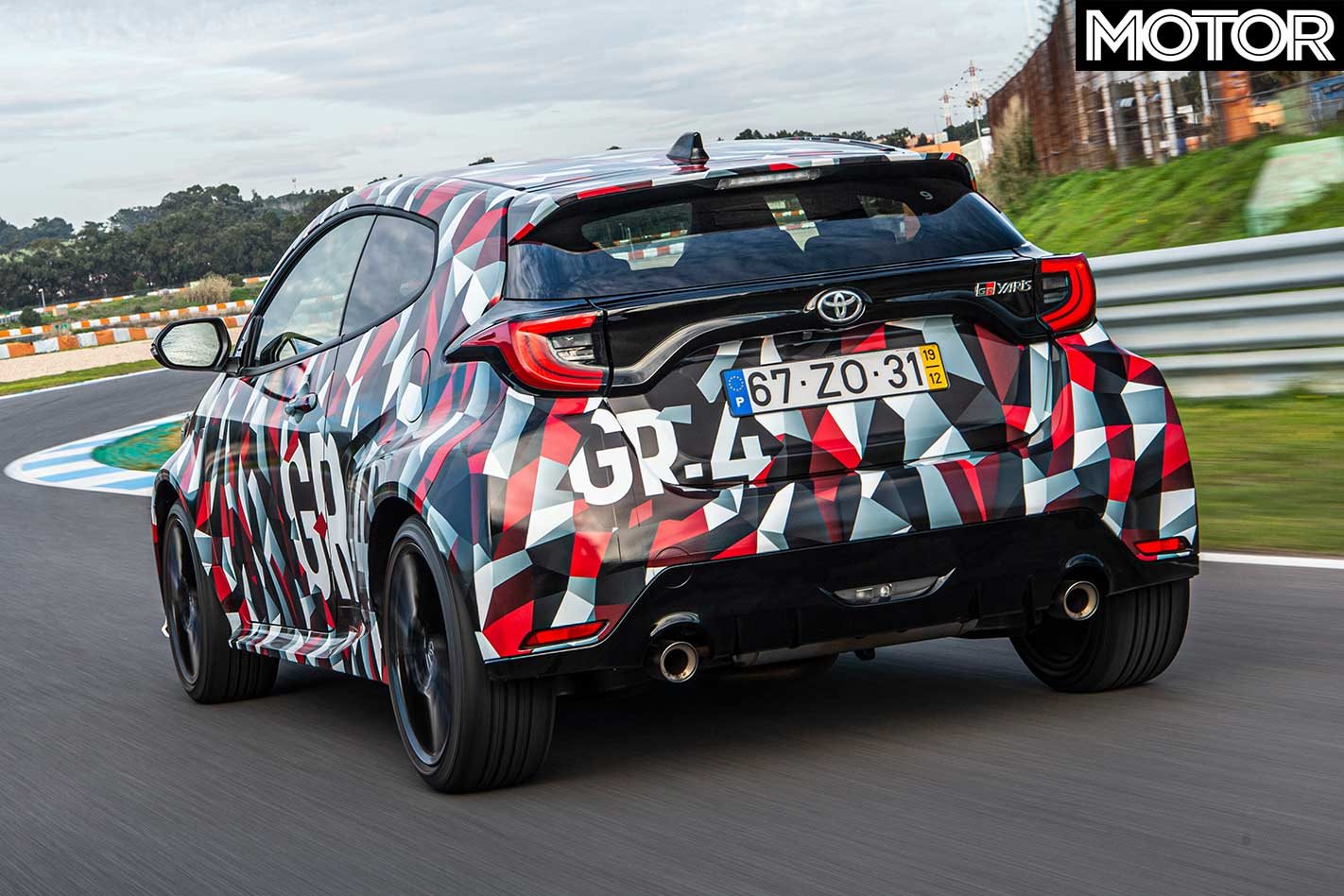 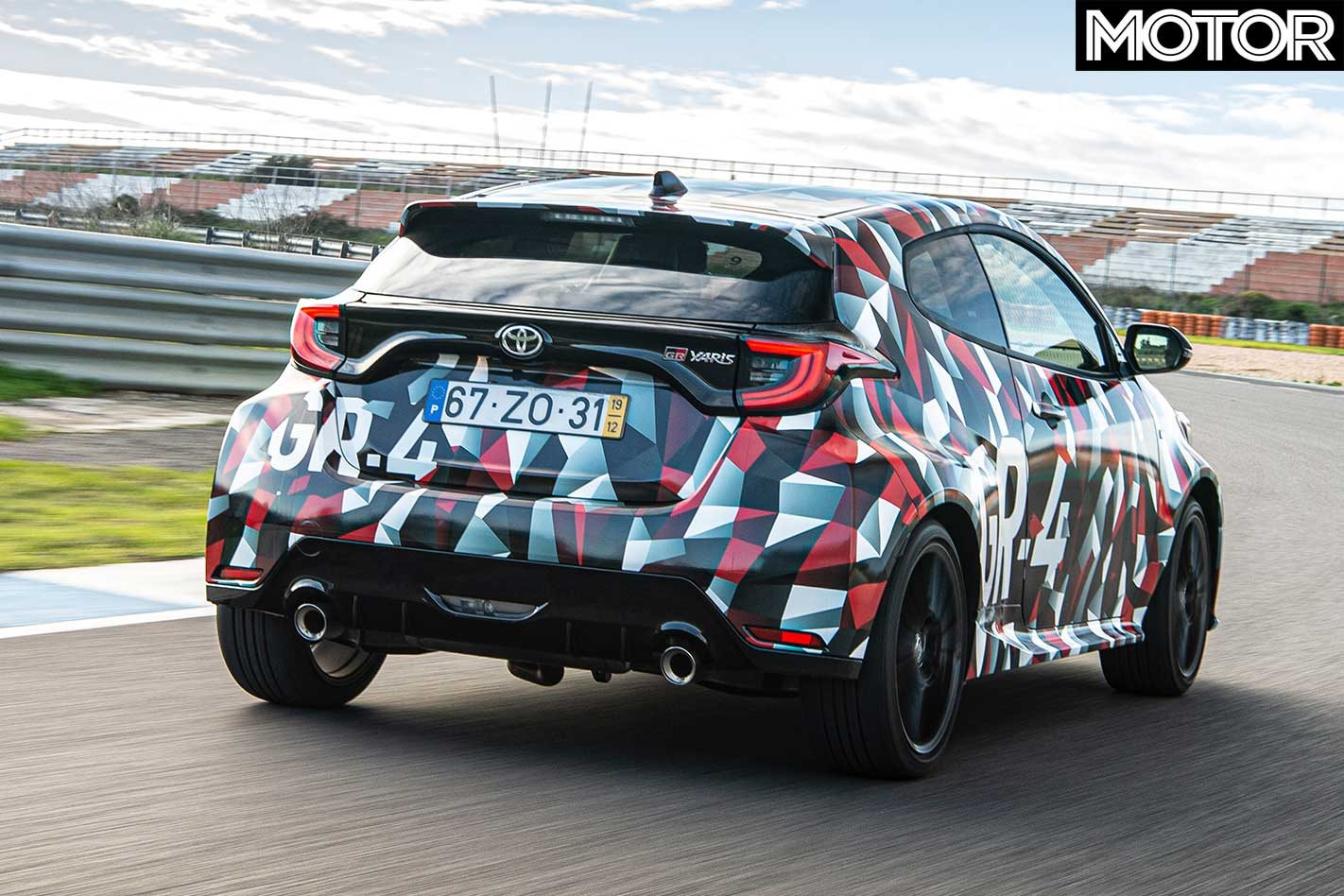 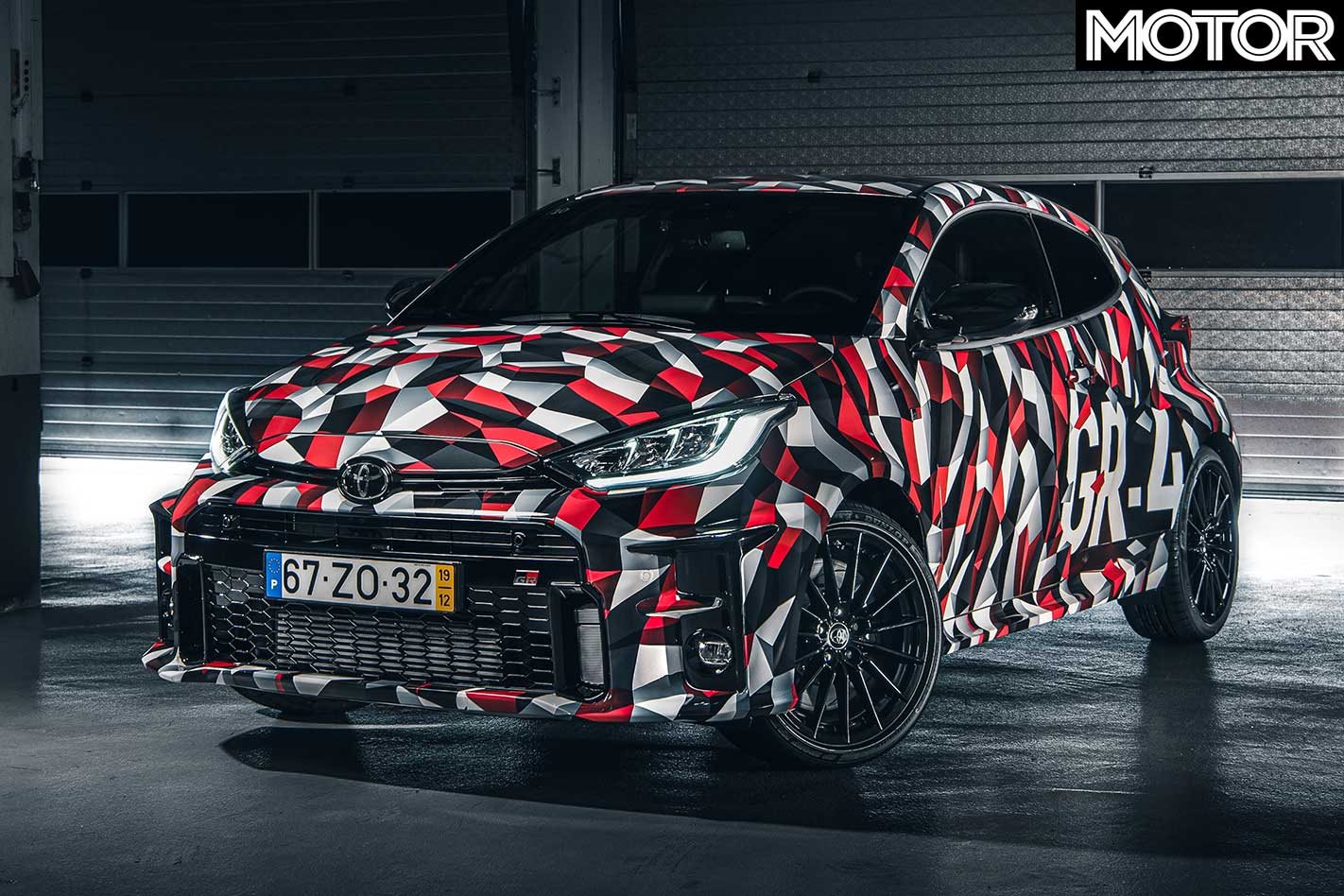 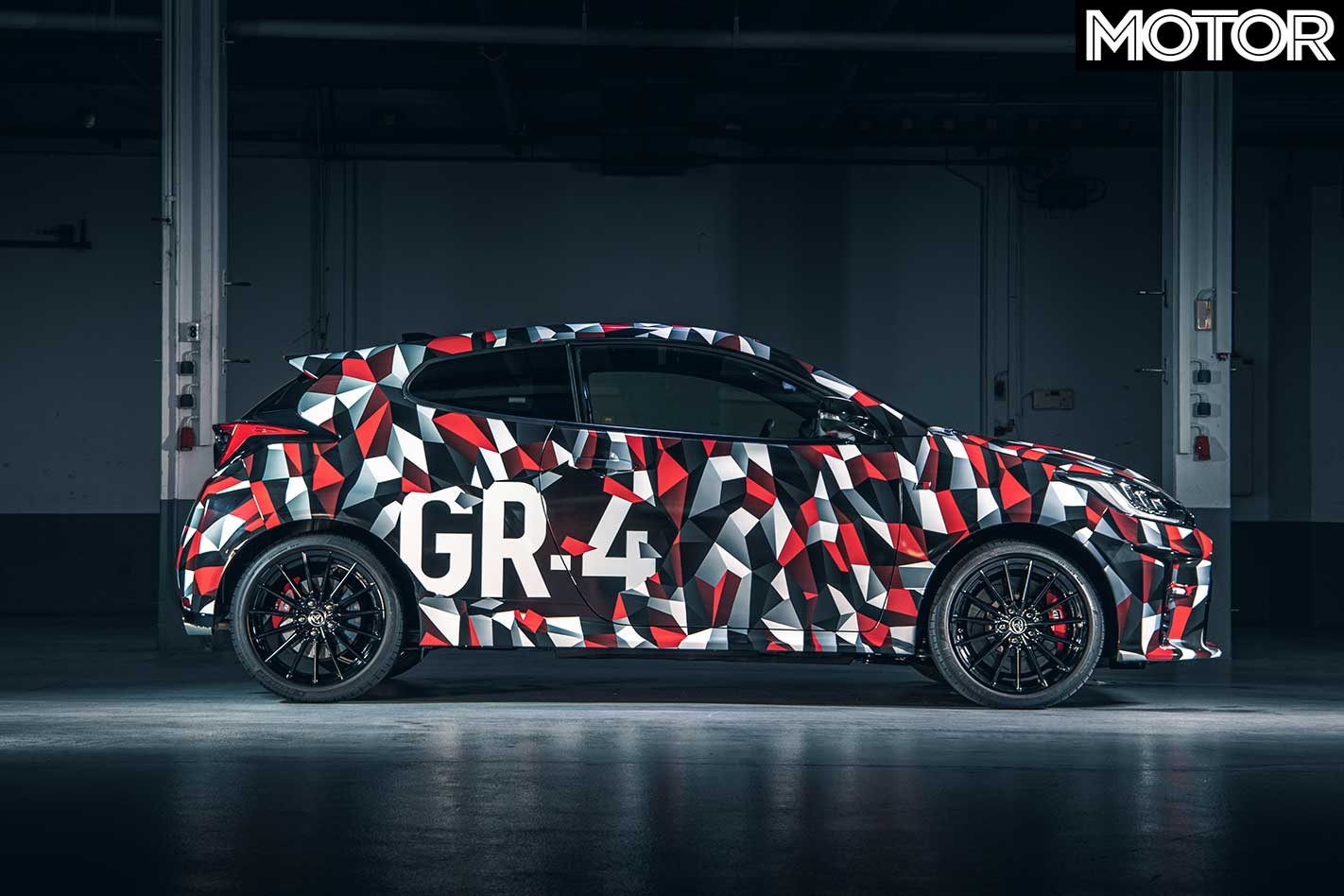 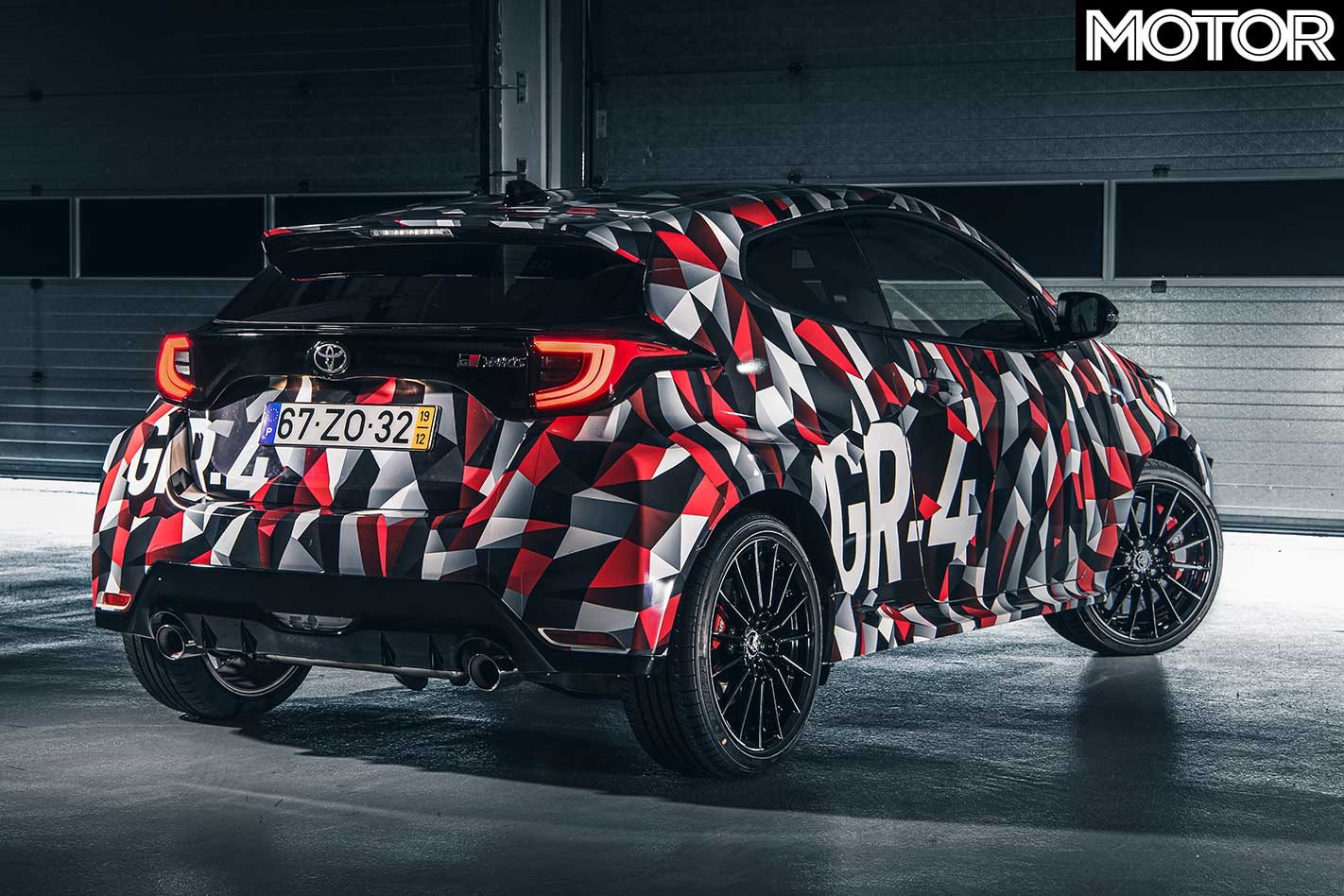 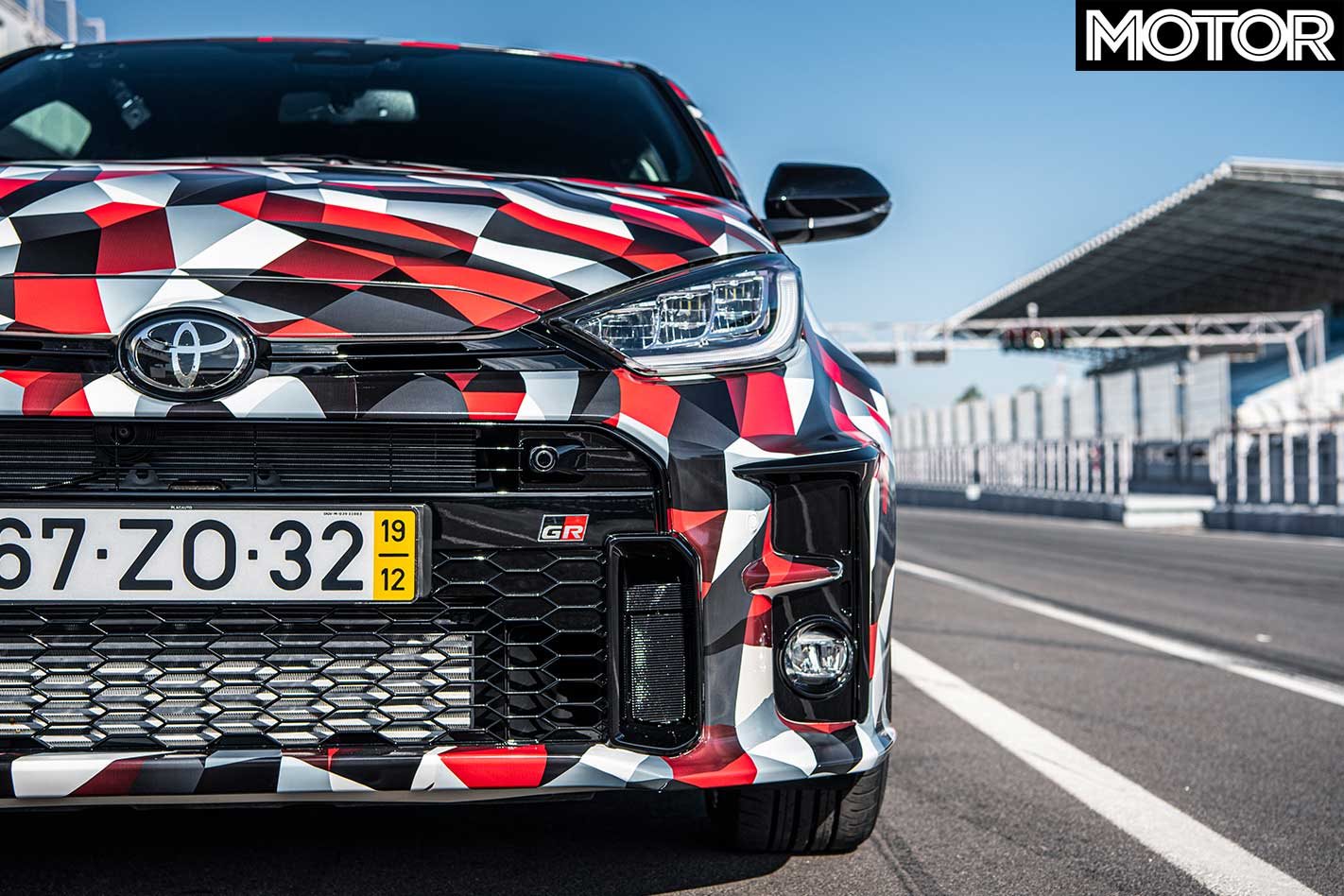 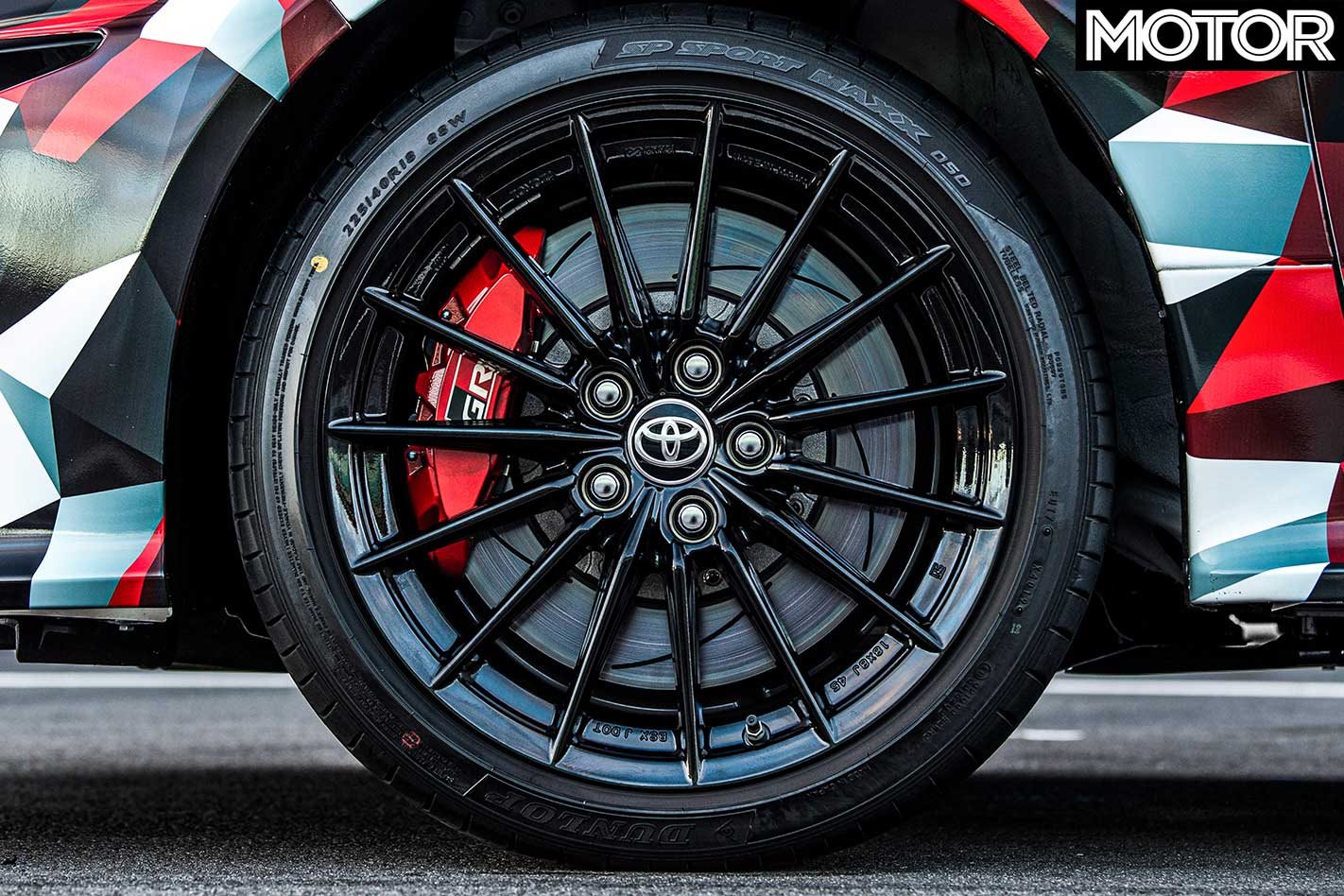 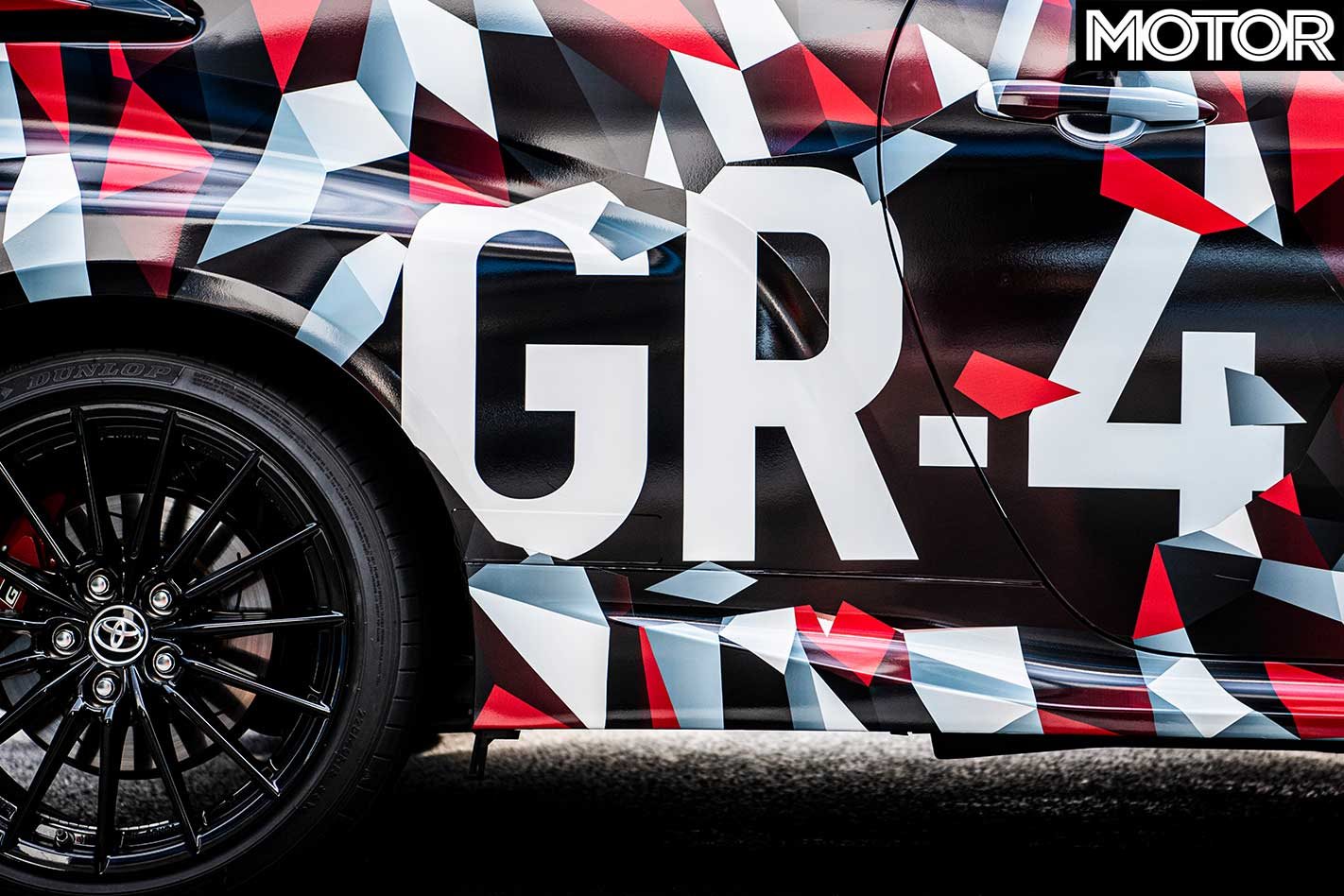 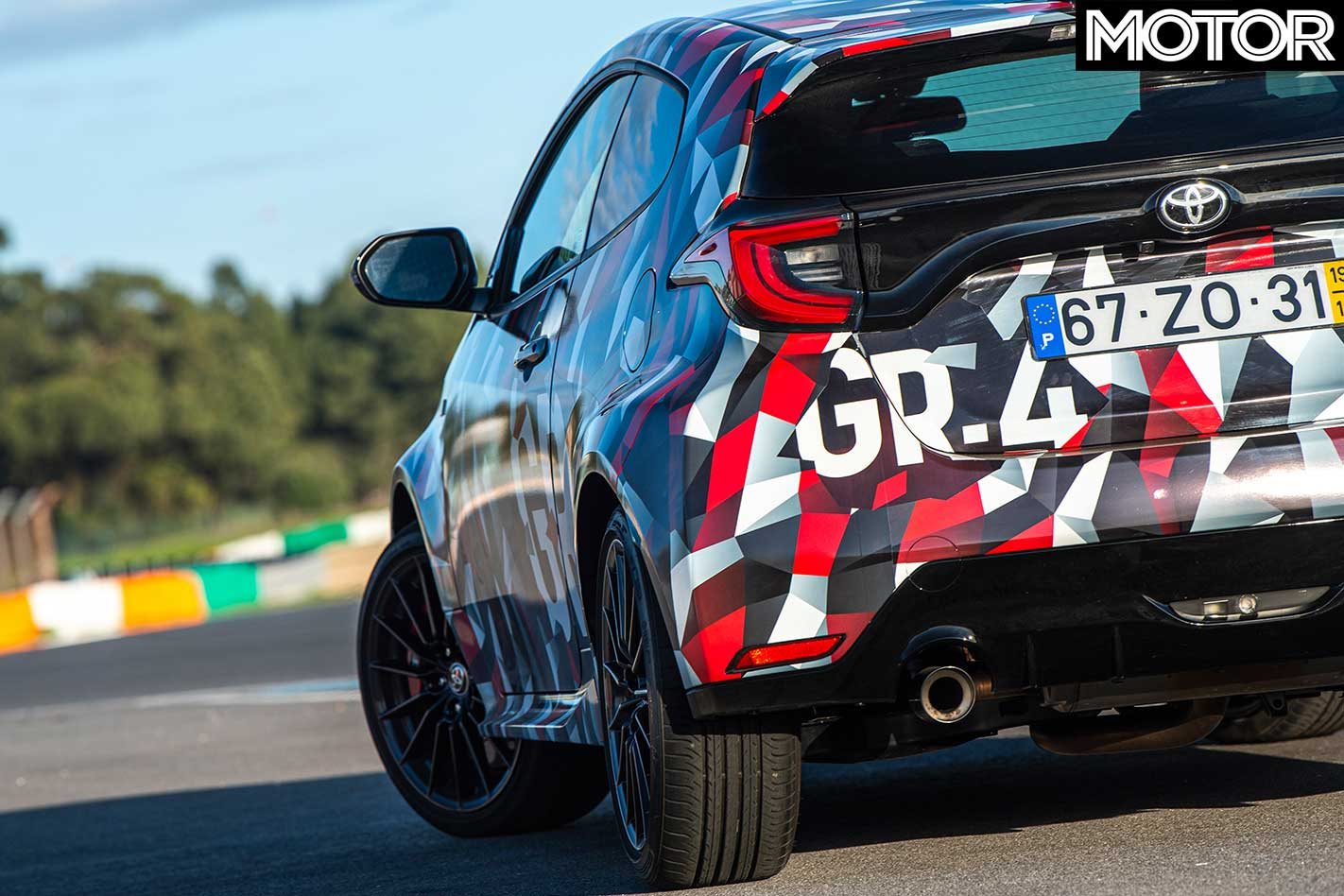 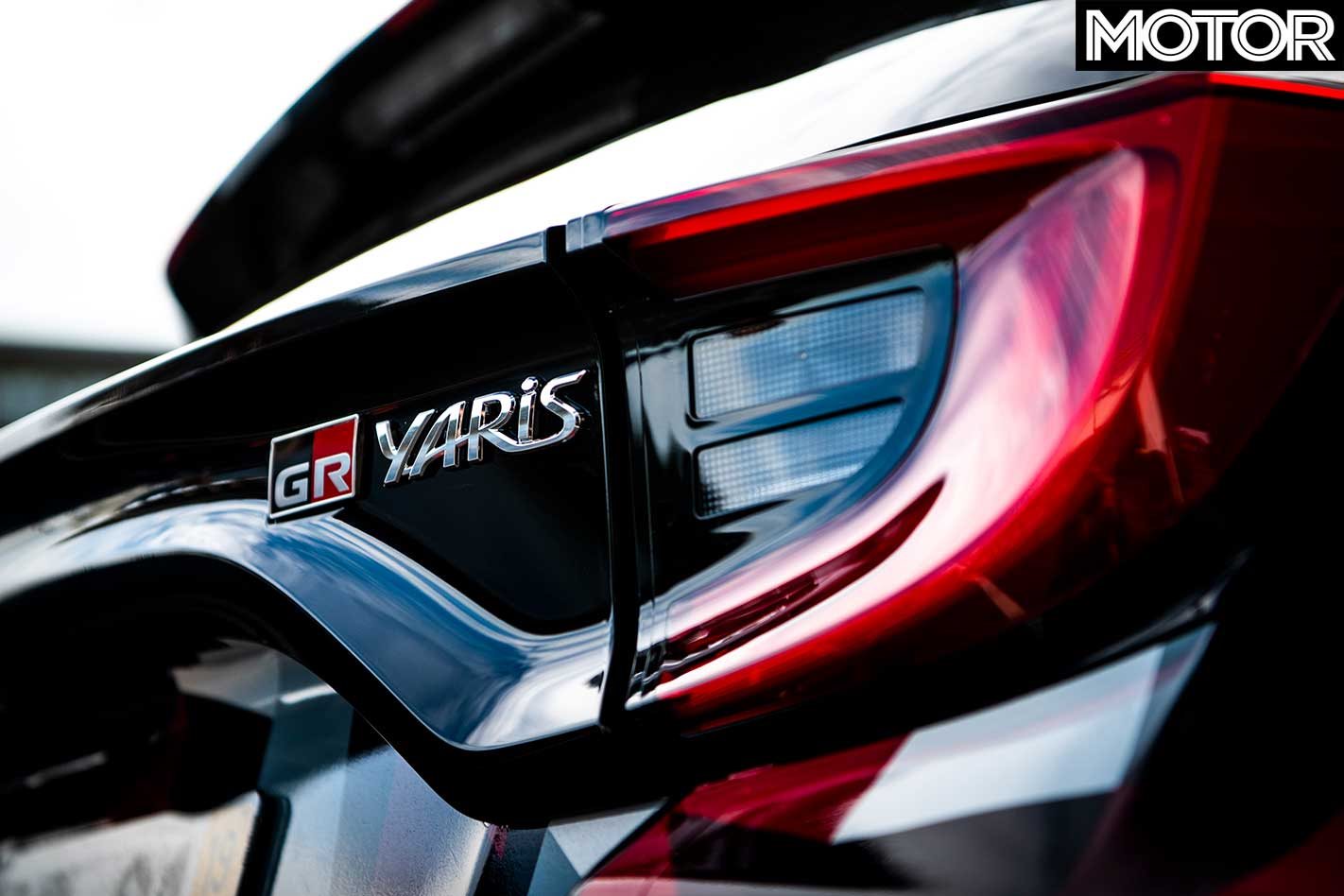