It’s fitting Honda chose Dresden as the base to globally launch its 2018 Honda Civic Type R.

The small city in Germany’s south was once its cultural jewel before allied forces levelled it in World War Two. It remained in ruins until, over the past thirty years, Dresden citizens began to rebuild it to former glory.

Honda’s Type R lineage has suffered a similar experience. Faster, better rivals bombed the badge into retirement in 2012. During this absence, however, Honda chose to quietly rebuild its performance arm.

Now, arriving this September for $50,990, an all-new Civic Type R will inject a hot Honda back into the Australian market. And it’s coming with vengeance. 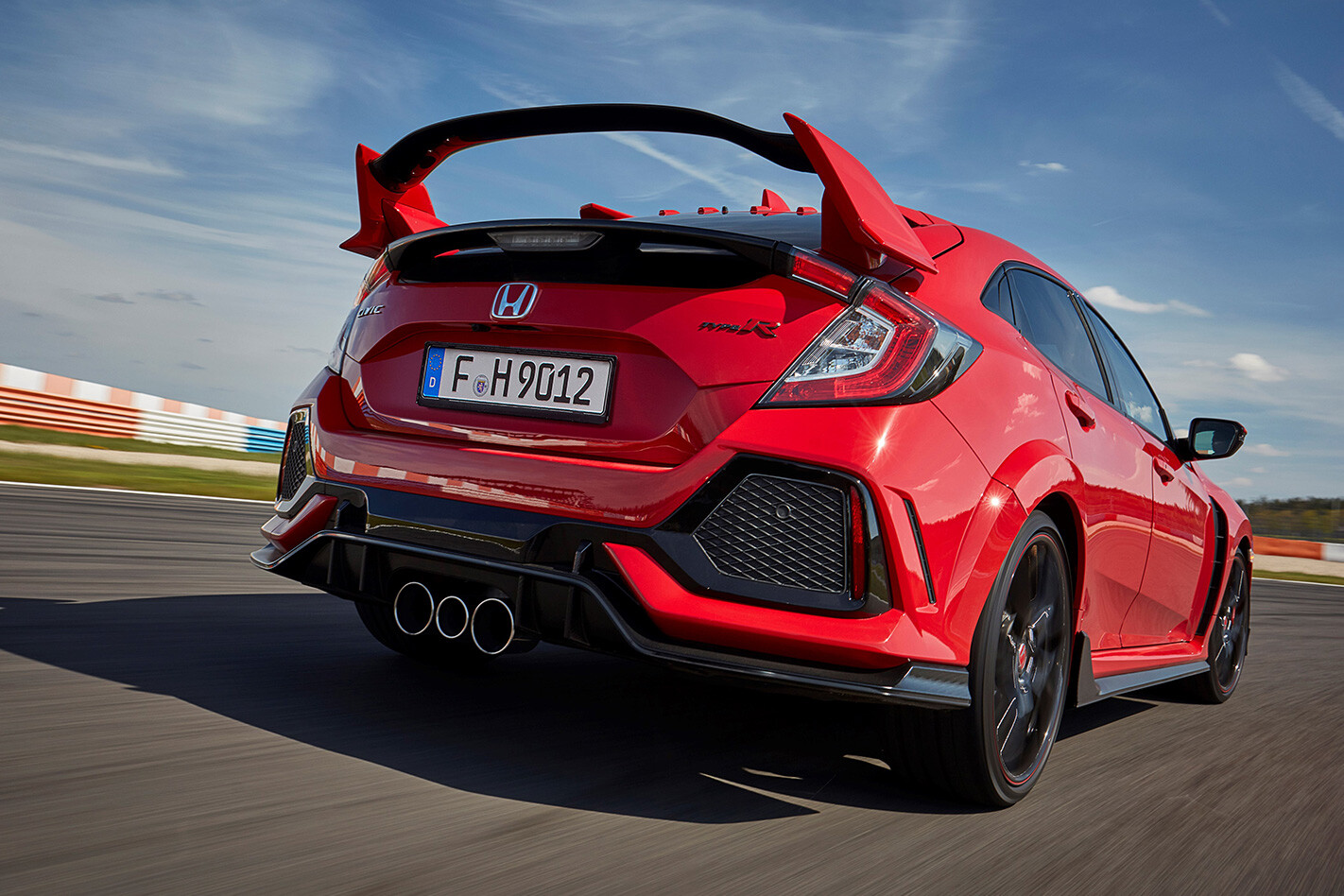 Yep, that’s right, this thing’s turbocharged. Honda’s traded revs for torque and hung a monoscroll turbocharger off the 2.0-litre engine. The result is 235kW and 400Nm.

Aussie cars, though, make 228kW in line with the 2015 Civic Type R, as engineers have wound back boost and fuel flow to protect it from our hot weather and poor fuel quality.

No Honda Civic Si for Oz

That’s still a significant jump up from the third-generation car’s atmo 148kW and 193Nm, the last Type R sold here. The turbocharger doesn’t only bring more power, but a change of character as well. This Type R isn’t about chasing redline for every last kilowatt. Even though power peaks at 6500rpm it works hardest in its mid-range, where its turbo punch blends in smoother than a VW Golf R and linear than a Megane RS. You can now short shift a Type R.

There’s no dramatic engine noise, either, besides a small whistle from a deflating turbocharger when the throttle plate closes.

Honda says an auto would add too much weight, so it's offered only with a six-speed manual. Atop it a spherical titanium gearknob which moulds nicely to your palm and drives into each gate with a satisfying snick.

Honda reckons 100km/h from rest is yours in 5.7sec in both Aussie and Euro models, and if the road’s long enough the Civic Type R can clip 272km/h. 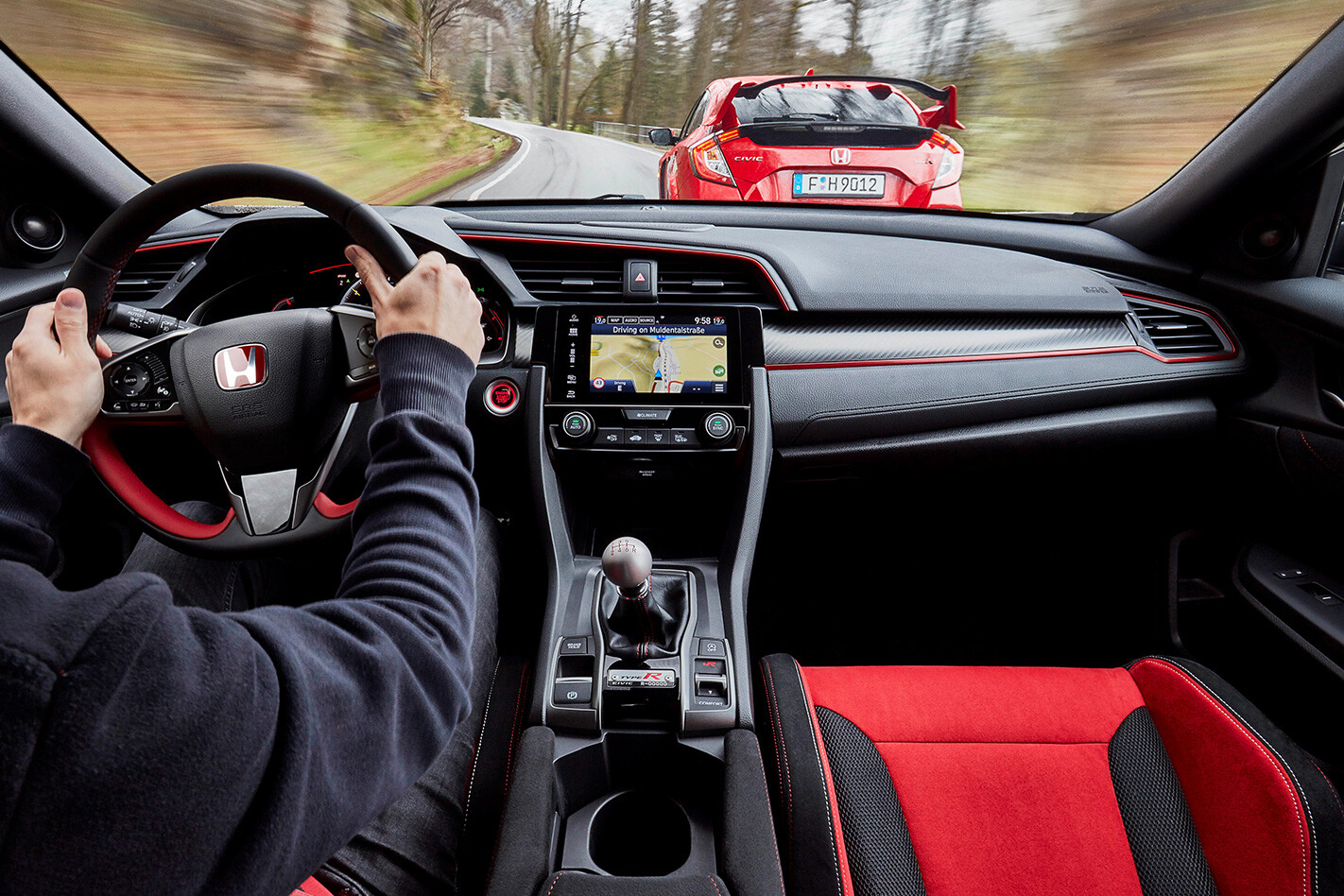 But not only can this Civic conquer Autobahns, its 7 minute and 43.8 second Nurburgring lap time tore seven seconds out of the old model’s effort.

Continental SportContact6 tyres add 10mm of tread to each corner. While 20-inch wheels hang over a 95mm longer wheelbase and sit 65mm further apart on the new rear track. As a result the Civic Type R feels rock solid at high speeds, tracking along the autobahn’s long radius bends at over 160km/h with excellent directional stability.

New aerodynamic trickery helps. All those wings, vents, and vanes make the Civic Type R a true downforce car. The only one in its category, Honda says. True or not, it feels properly planted at such speeds.

With huge four-piston Brembo front calipers clamping drilled discs the Civic Type R pulls up like its trailed by parachutes, but it lacks the finesse and feel of Nissin systems in foregone models.

Adding to its dynamic arsenal are adaptive dampers. They’ve been retuned for the 2018 model and are at the centre of its three-mode drive system that flicks between Comfort, Sport, and ‘R+’.

They give the Type R a broad range of ride compliance without sacrificing grip. It’s hard to say how they’ll handle Melbourne’s tram-tracked roads, but first impressions are good. As things speed up, Renault Sport products might have more turn-in, however this Civic Type R is on another level after apexes. That redesigned dual-axis front suspension system and helical LSD give it phenomenal traction, and feel, under full throttle at corner-exit.

What lets it down, though, is its dual-pinion electric steering rack. Numb steering feel robs the car of much needed tactility. And it’s darty just off centre, requiring quick corrections to keep a smooth cornering arc.

Buyers new to the brand will find it a dynamic class act that’s both hugely capable and forgiving. It’s also very liveable. The ride’s polished, you won’t suffer tinnitus on highways, and we can think of worse transmissions – automatic or manual.

Inside, the rear seats are a bit drab, there’s no satellite-navigation available on Aussie models, and we’d appreciate electrically adjustable front seats. But the interior feels solid, forward vision’s great, and the Type R specific seats are extremely comfortable and well bolstered.

Demand's been strong, with over 250 orders already placed on the car in Australia. Honda expects to sell 1000 units over its first year on sale.

Diehard fans might miss the frenetic power rush, raw lightweight cabins, and textural steering feel that defined original Type Rs. But maybe that’s what happens when you rebuild something from the past. You lose its original foundations to make it better.

Dislikes: No sat-nav for Aussies, not that hardcore anymore