The mystique of the black Spec-V GT-R is immediate.

The lure of such an exclusive, anticipated supercar sparked a hive of activity around the world as pundits and supercar lovers tried to pick exactly what the Spec-V would gain over the already-capable standard GT-R, after the flying V was spied at the Nurburgring last year.

We’d heard about its lightweight carbonfibre body parts, its $70,000-plus carbon-ceramic brakes, its high-gear boost control, unique Bilstein suspension, and ultra-high performance Bridgestone rubber. Now it’s our turn in the hot seat to see how these changes alter the GT-R. 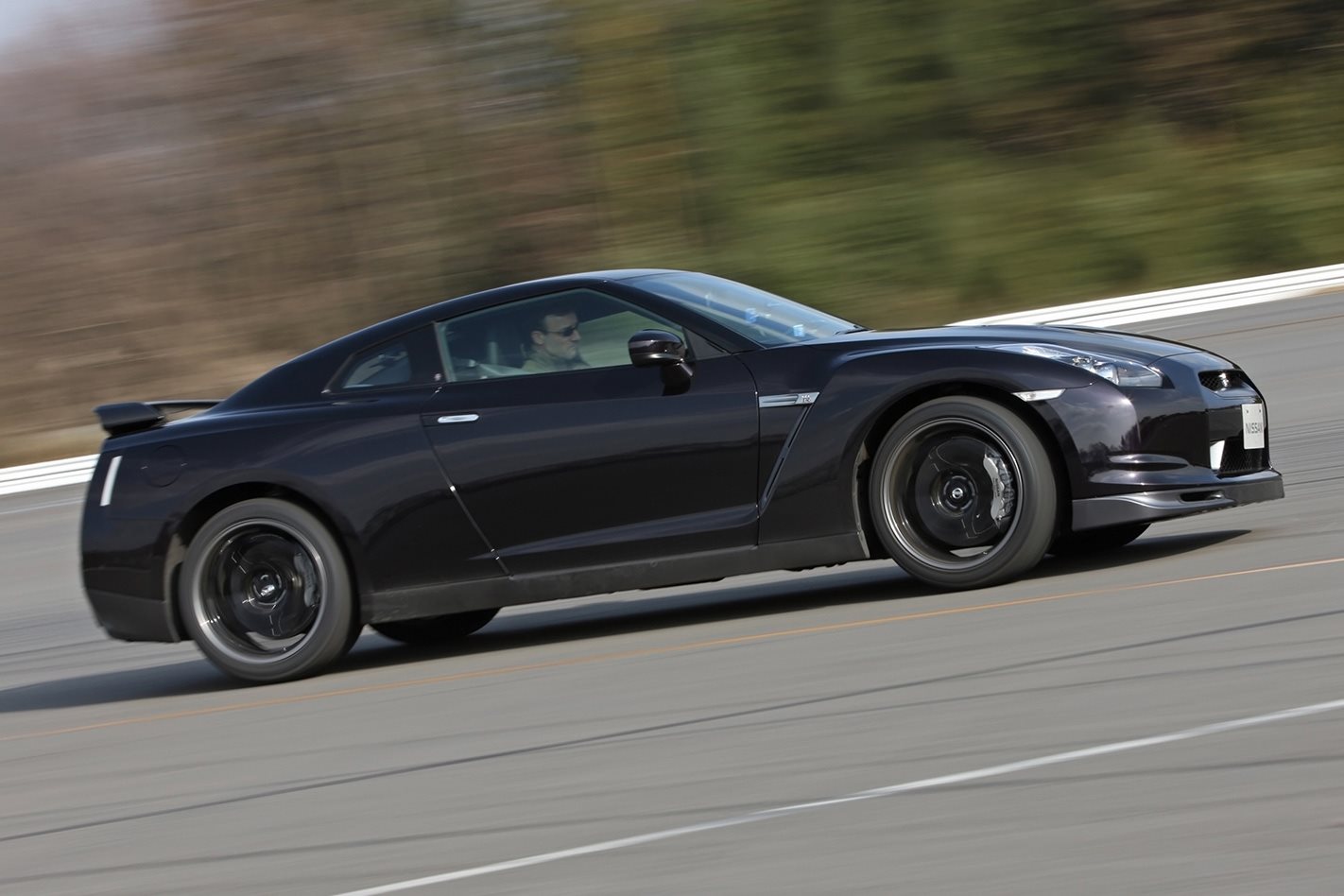 The GT-R’s creator is celebrated race engineer Kazutoshi Mizuno, and as he leads us onto the test track, he begins raving about the ultra-special upgrades on the Spec-V. It’s like Mad Max being guided by his leather-clad workmate, The Goose, into an underground workshop to reveal the thundering 448kW ‘pursuit special’ the police mechanic has just finished creating. “Shut the gate on this one, Maxy. It’s the duck’s guts!”

Now Mizuno might not be as colourful with his description, but he is no less enthusiastic talking about the beast he’s created. He is the only chief engineer we know of who reports directly to the boss, in this case Nissan CEO Carlos Ghosn. And after hearing his ‘supercars according to Mizuno’ philosophy, you understand why. This fella is an engineering genius and that’s why Ghosn basically gave him free reign. 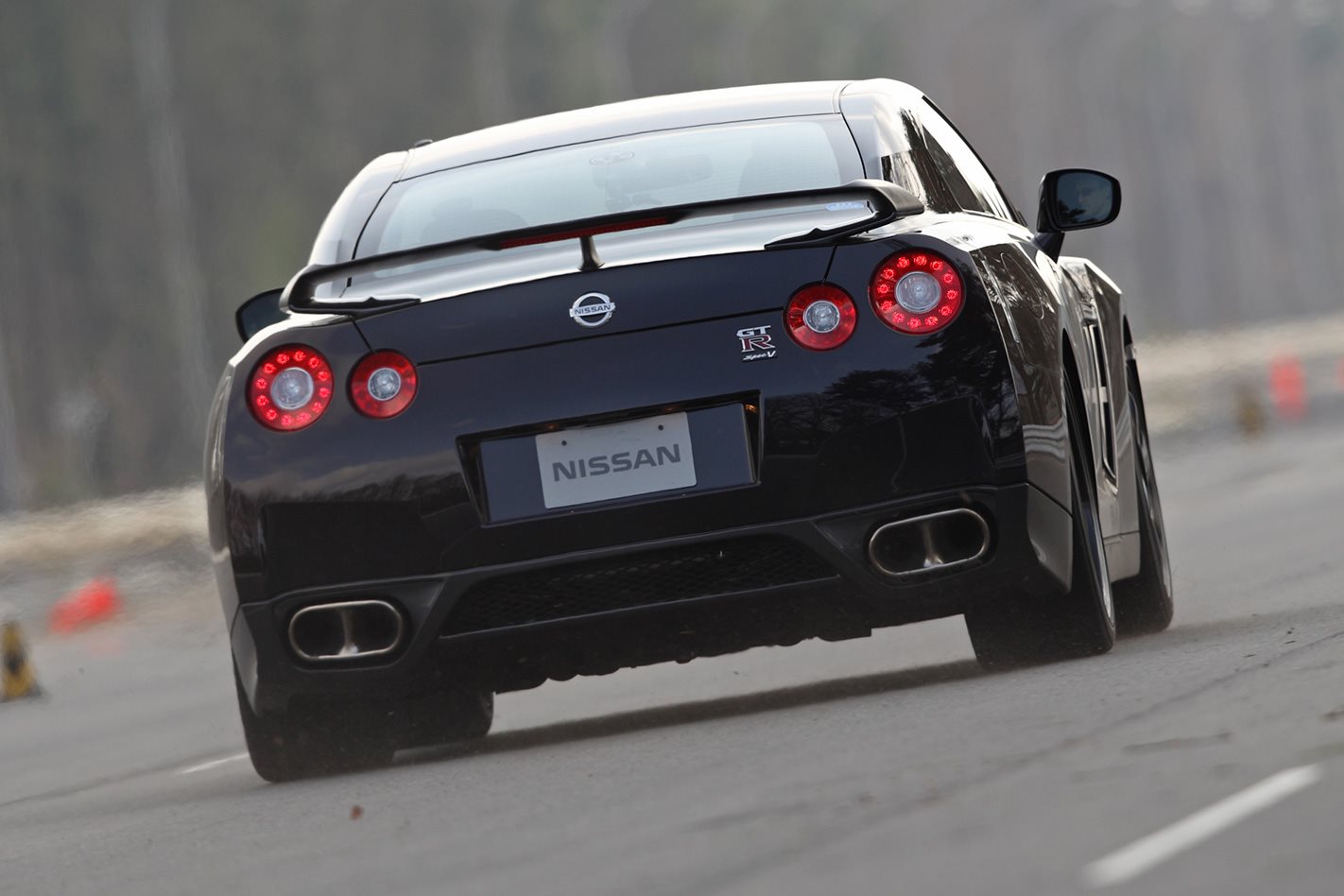 "We thought the opposite to most engineers,” he said. “We thought backwards. For the GT-R, we came up with a target kerb weight first of around 1750kg and then thought, what do we need to [do to] achieve that weight?”

The Spec-V looks more menacing than the regular GT-R. Shaded in optional ($8700!) Ultimate Black Opal paint, the Spec-V’s carbonfibre brake ducts, grille, and rear wing not only give it a racy nuance, but they also reduce weight. The lightweight, forged-aluminium 20-inch wheels by Rays Engineering openly advertise the fact that this car means business.

To shed as much weight as possible, Mizuno replaced the tight rear seats with soft plastic covers, while in the front he specified two ultra-thin carbonfibre Recaros to save more kegs. All up, the Spec-V has lost 56kg, dropping kerb weight to 1684kg which, to tell the truth, is less than the 100kg weight loss that we expected.

“The GT-R is the anyone-anywhere-anytime supercar,” claims Mizuno. “The Spec-V, in contrast to what you might be thinking, is not the high-performance version of the GT-R.” Huh, really? “It is a car tailored to those drivers who really enjoy fast driving and like to push a car to its limits on a track. That’s why we strived to build the best brakes in the world,” he stresses. Right. 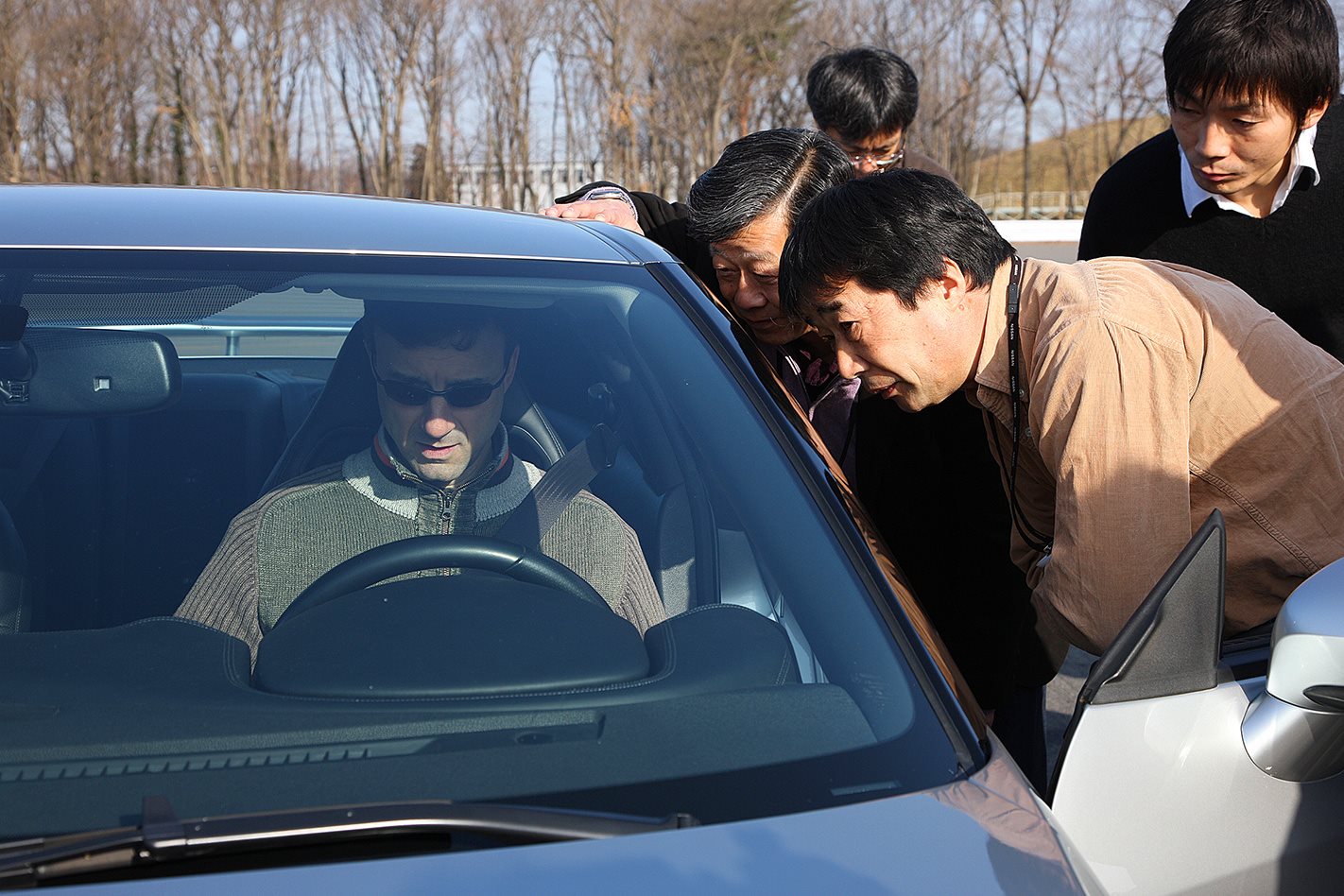 With a nod from Mizuno, we flick the starter button and the Spec-V springs to life with a deeper, throatier burble than the stock GT-R thanks to a newly fitted titanium-coated exhaust system. Finally, an exhaust that sounds like an exhaust! The Spec-V’s 3.8-litre twin-turbo V6 is painted black instead of silver, and claimed power is 357kW, which is no different from the regular MY09 GT-R – again, a figure less than we expected.

But as Mizuno explains, “That was not our aim. We wanted to lift the on-road thrill factor, not power. And re-define brakes.” The 588Nm torque figure is identical to the regular GT-R’s, too, however there is a high-gear boost control device that ups that figure by 19Nm for an 80-second burst.

As we ready ourselves to launch the car, Mizuno makes sure we know about the retuned VDC unit (an upgrade on all post-MY09 GT-Rs). He is basically saying that he strongly recommends we leave the VDC on, as minor revisions to its programming make it as fast as, if not faster than, the car with the VDC off.

“Oh, so you don’t want us to use the launch control?” we say cheekily. To which he replies half-smiling: “What are you talking about? The GT-R has no such feature.” He is just toeing the company line, because Japanese law states that road cars cannot have launch-control systems.

Leaving the stability-control on, there’s no need to floor the brake pedal, wood the throttle to 4500rpm and release the brake like with the standard GT-R. So we take Mizuno’s advice and just transfer our right boot gently off the brake and floor the throttle. 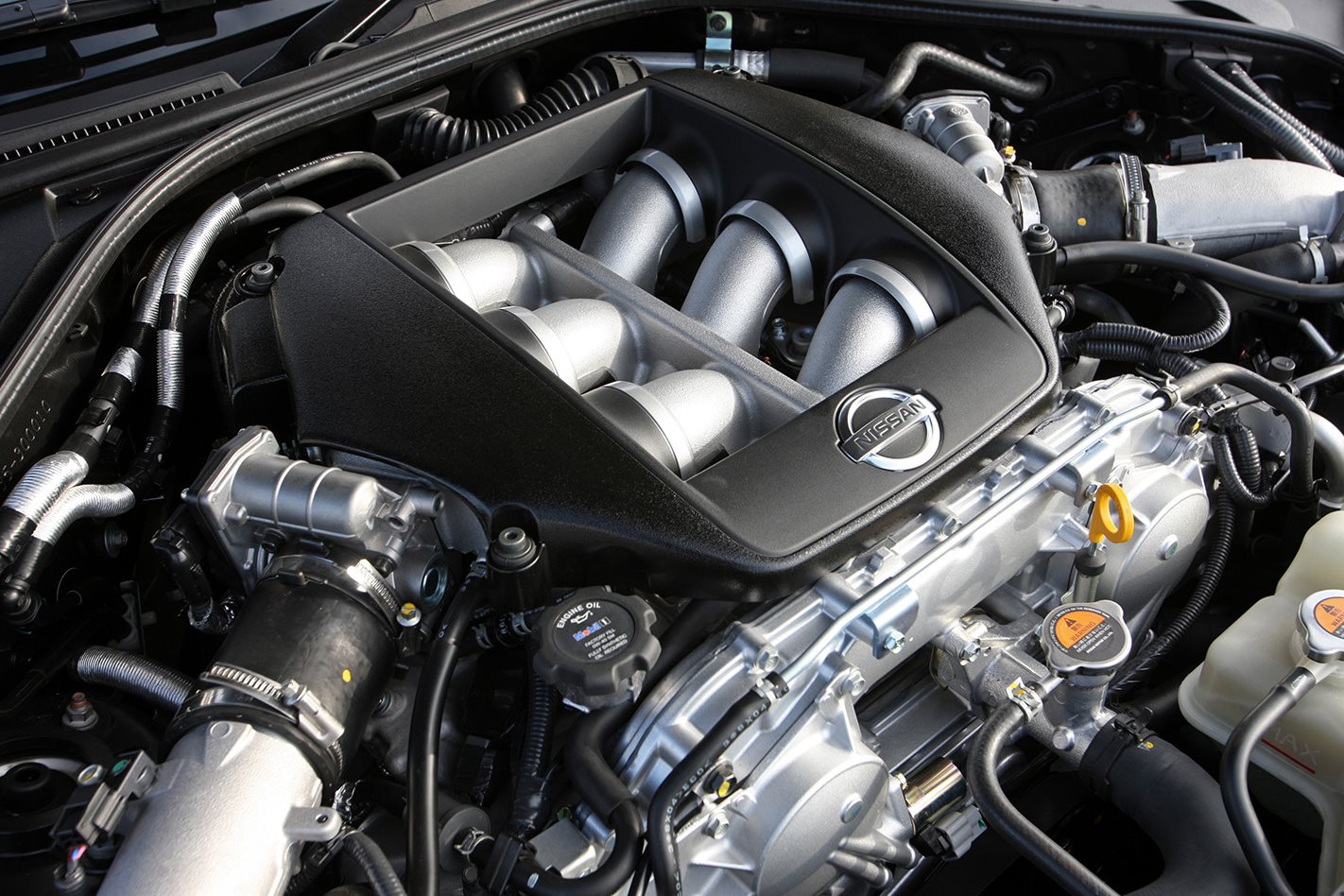 In contrast to the original GT-R’s brief loss of traction at launch, the Spec-V takes off instantly with virtually no tyre squeal. This thing gains speed like it’s been catapulted from an aircraft carrier. Simply awesome. Zero to 97km/h (60mph) comes up in 3.4 seconds and the quarter-mile flies by in 11.5 at 201km/h.

That makes the Spec-V faster than not only the Dodge Viper, Porsche 911 Turbo and Corvette ZR1, but its true European rivals in the Ferrari 430 Scuderia and Porsche 911 GT2.

The slalom is a true test for the revised suspension set-up and tyres. On the Spec-V, the switchable Race, Sport, and Comfort dampers are history. The new car’s one-size-fits-all units were jointly developed by Bilstein and Nissan to achieve the best combination of grip and ride quality.

The tyres might look like stock 20-inch Bridgestone Potenza RE070ZRs, but they’re not. To endure the extreme braking forces of the Spec-V, Mizuno asked Bridgestone to produce stiffer sidewalls for the Spec-V’s boots, with more rigid shoulders and a more aggressive tread pattern that puts more rubber in contact with the road.

But the Spec-V’s big news is its carbon-ceramic brake system. It pulls the car up quicker than any other stoppers of the past and resists fade better. This six-piston affair is a collaboration between Brembo and Nissan. From motorsport, Mizuno knows brakes and what’s here is just a bee’s weeny shy of the stoppers found on a GT track car. 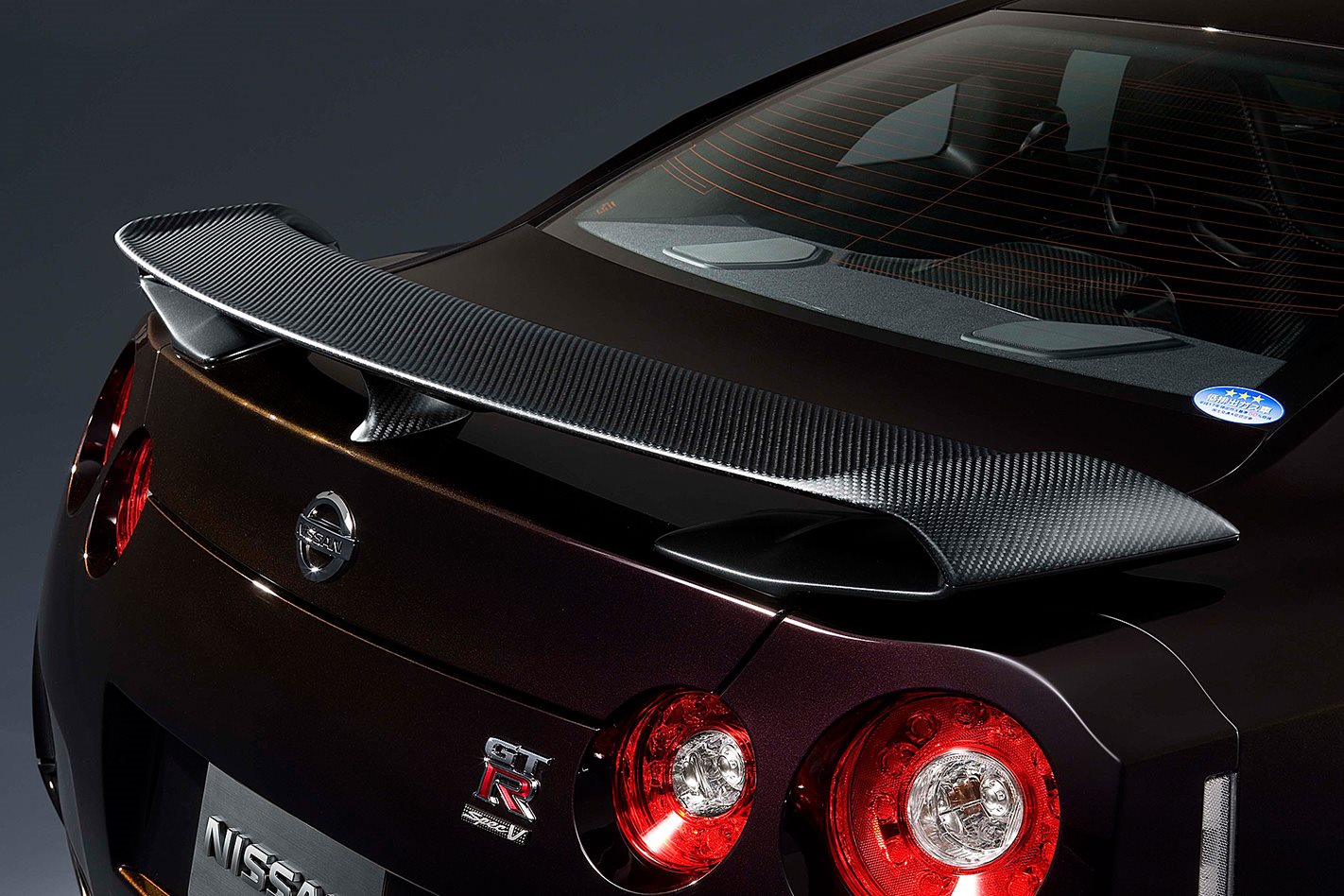 Pushing the Spec-V through the slalom, we immediately notice just how much more composed the car is at speed, with more feedback and less understeer than before, but acceptable ride quality. Grip is enormous. At 120km/h, the Spec-V is nearly 1.6 kays faster through the cones than the GT-R we tested last October. But, more significantly, it is much quicker than the 911 GT2’s 115km/h and matches the Corvette ZR1!

On the skid pad? Fitted with those ultra-grippy Bridgestone Potenzas and fixed Bilstein suspension, the Spec-V returns a sensational figure of 1.12g, compared to the stock GT-R’s 0.93 and the ZR1’s impressive 1.06.

Braking from 97km/h to zero, the Spec-V’s package pulls up in 32.3 metres. After a couple of tries wooding the huge carbon-ceramic anchors, our stopping distance is curiously identical to the GT-R’s. The Spec-V is lighter, has better rubber and ceramic anchors, so what gives? Nissan’s public-relations bloke pipes up and points to the windstorm that has just dumped dust and crap all over the track.

We also reckon that maybe we did not quite generate enough heat throughout the test to get these all-conquering brakes up to operating temperature.

After all, for all intents and purposes, these are racing brakes and need heat on board to achieve maximum stopping force. Okay, so we were expecting something like the ZR1 and GT2’s stopping distance of 29.3 metres, but 32.3 metres will have to do for now.

When Mizuno points us in the direction of the winding test track at the back of the facility, our first lap is extra-tentative so that we can adequately warm up these carbon-ceramic stoppers. Satisfied that the rotors and pads are now hot, and that the dust and pollen has all but gone, we open the throttle more and brake later, diving deeper and deeper into each successive corner. And the Spec-V just keeps delivering, inviting us even deeper into the turns. 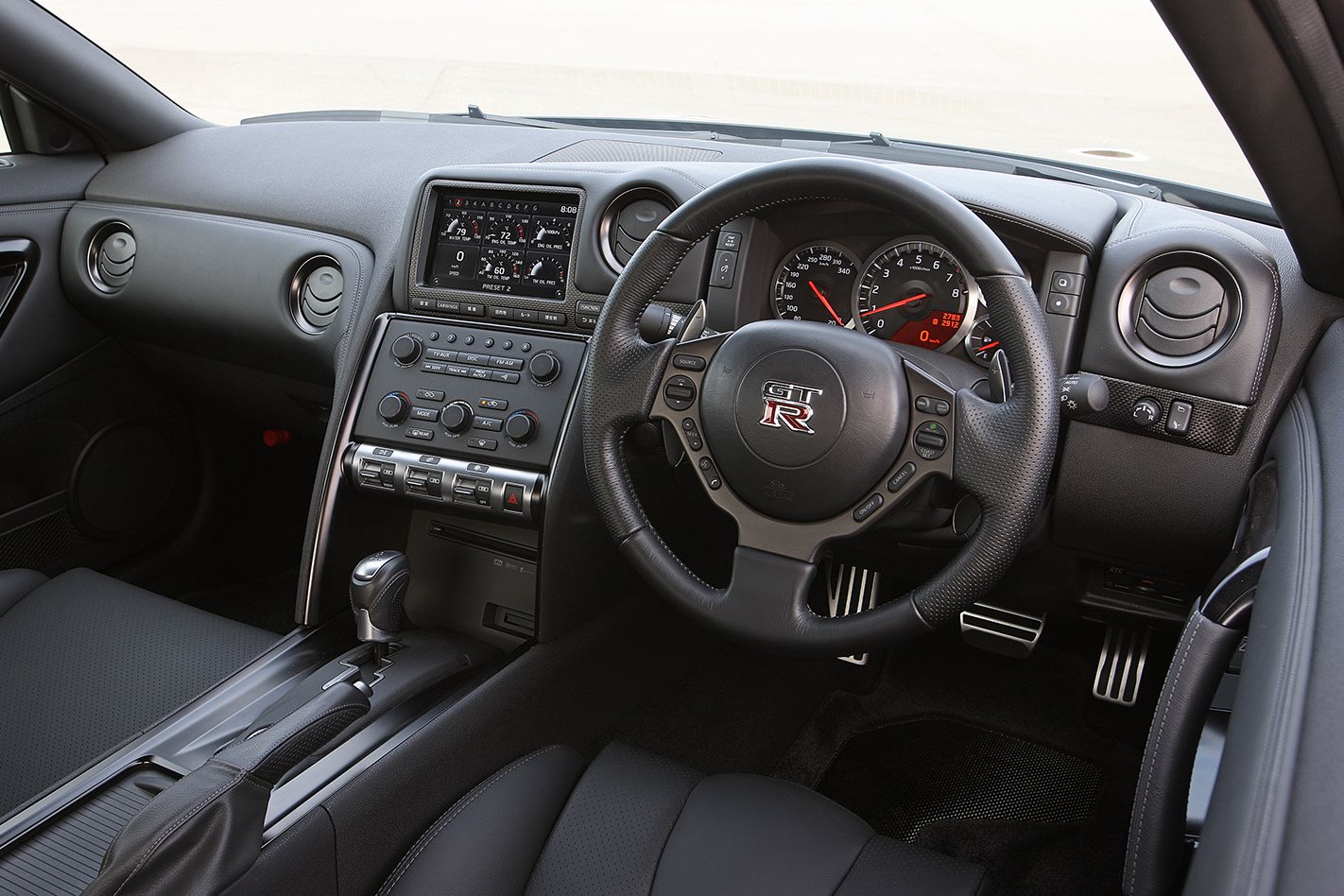 Nothing can really prepare you for the galactic braking force as you jump hard on the Spec-V’s anchors. We’ve been told that up to 2g is generated under full braking from 240km/h. And, yes, it feels that brutal – like pulling up in a GT race car. But the Spec-V remains stable and flat throughout the whole process, instilling an eerie sense of calm in its driver. You almost feel as though you are coming out of hyper-space as the scenery slows and the Spec-V ’s pace is arrested. Violently.

No matter how many laps we complete, the Spec-V’s brakes are always there, and we mean every photon of braking force that is there for the taking, every time. Brake fade simply doesn’t exist. The standard GT-R starts to fade after five laps of Fuji Speedway – including full braking from over 260km/h at the end of the mile-long straight.

Mizuno tells us the Spec-V can push its limits all day at Fuji and come back for more the next day. And we believe him. The downside? You’d better have upwards of $70K in your back pocket to replace pads and rotors. 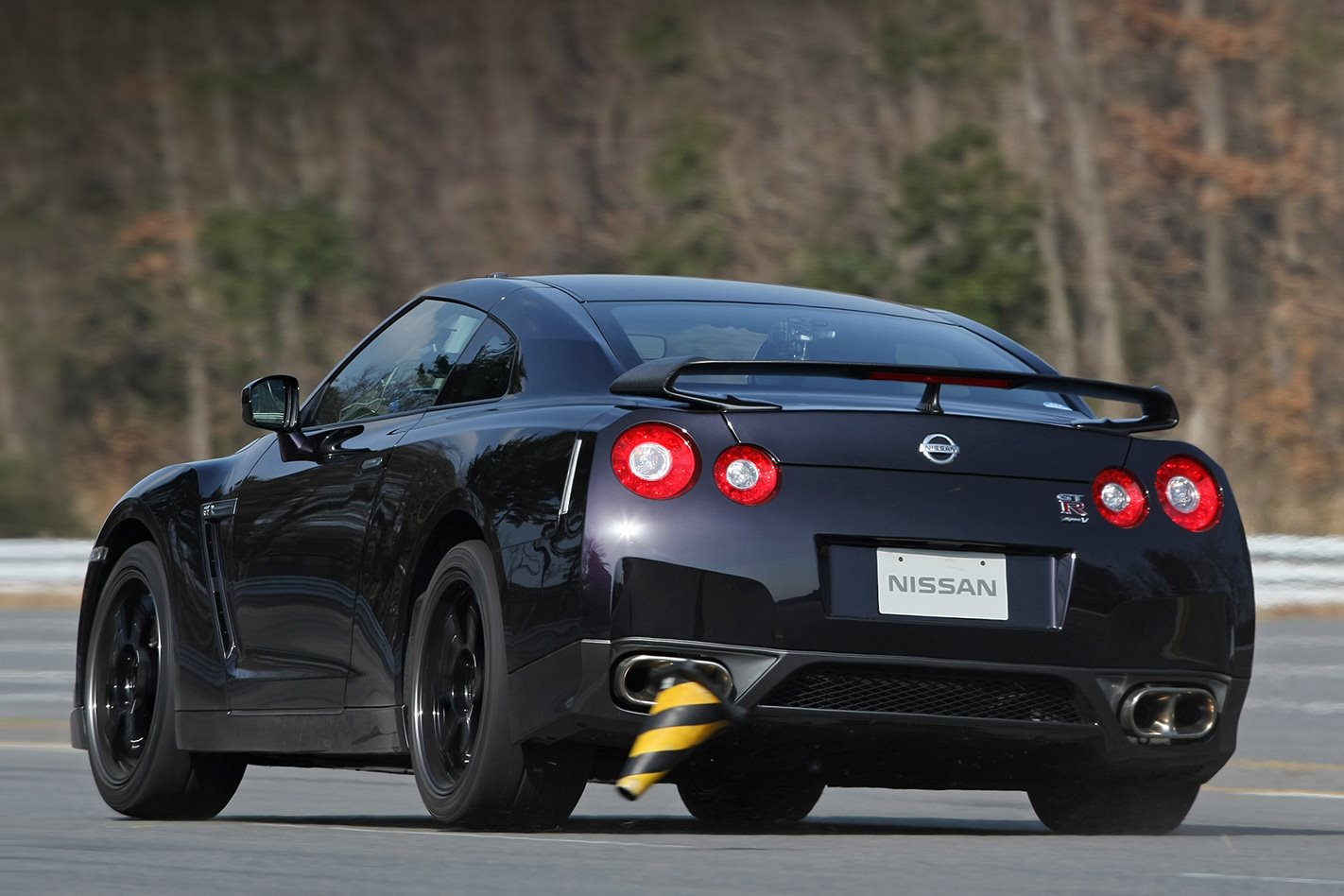 As we exit yet another corner at Nissan’s Tochigi test track, we flick the steering-wheel-mounted switch that engages the high-gear boost control for an 80-second shot of additional torque. It’s “just enough for half a lap of a race track like Fuji Speedway,” explains Mizuno. And that’s where this car is at home – going full throttle on a circuit.

In the Spec-V, Mizuno has created a GT-R track special packing prodigious brakes, unyielding rubber, and a suspension set-up that combines both ample traction and acceptable comfort. But it comes at a premium. Try $242,571. In Japanese coin, that’s double the price of a base GT-R and $65,000 more than the Corvette ZR1 that generates similar test results.

At that price, the Spec-V could be a hard sell even in Japan, even if they only make 30 units a month. Exports are yet to be confirmed.

Just to keep us all salivating at the evolution of Japan’s greatest-ever car, Nissan will turn up at the Nurburgring in Germany in April with the Spec-V in an attempt the smash its own 7:29 lap time. And there’s more for the GT-R in the pipeline, apparently. That’s right, Mizuno has more magic up his sleeve. Watch this space. 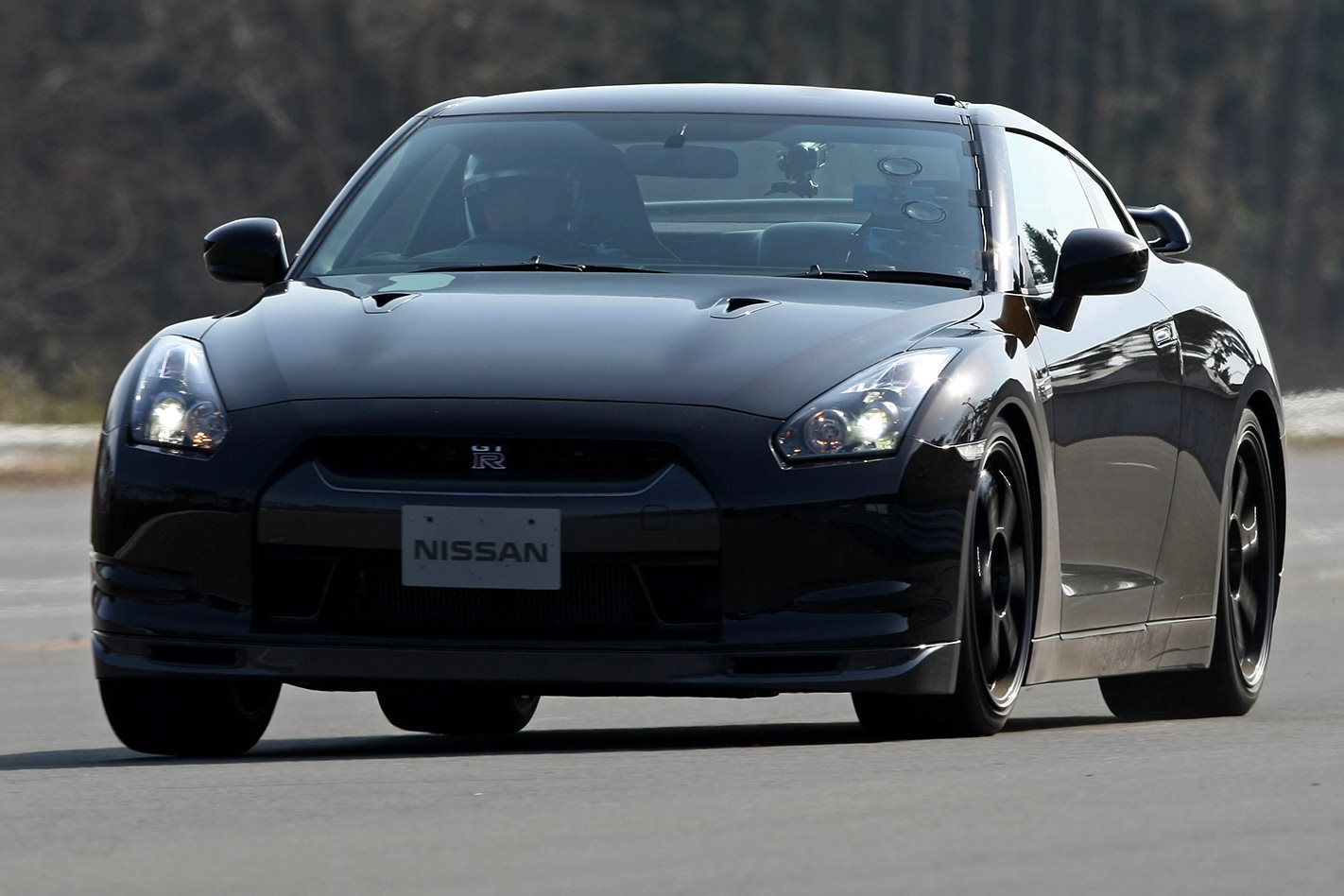 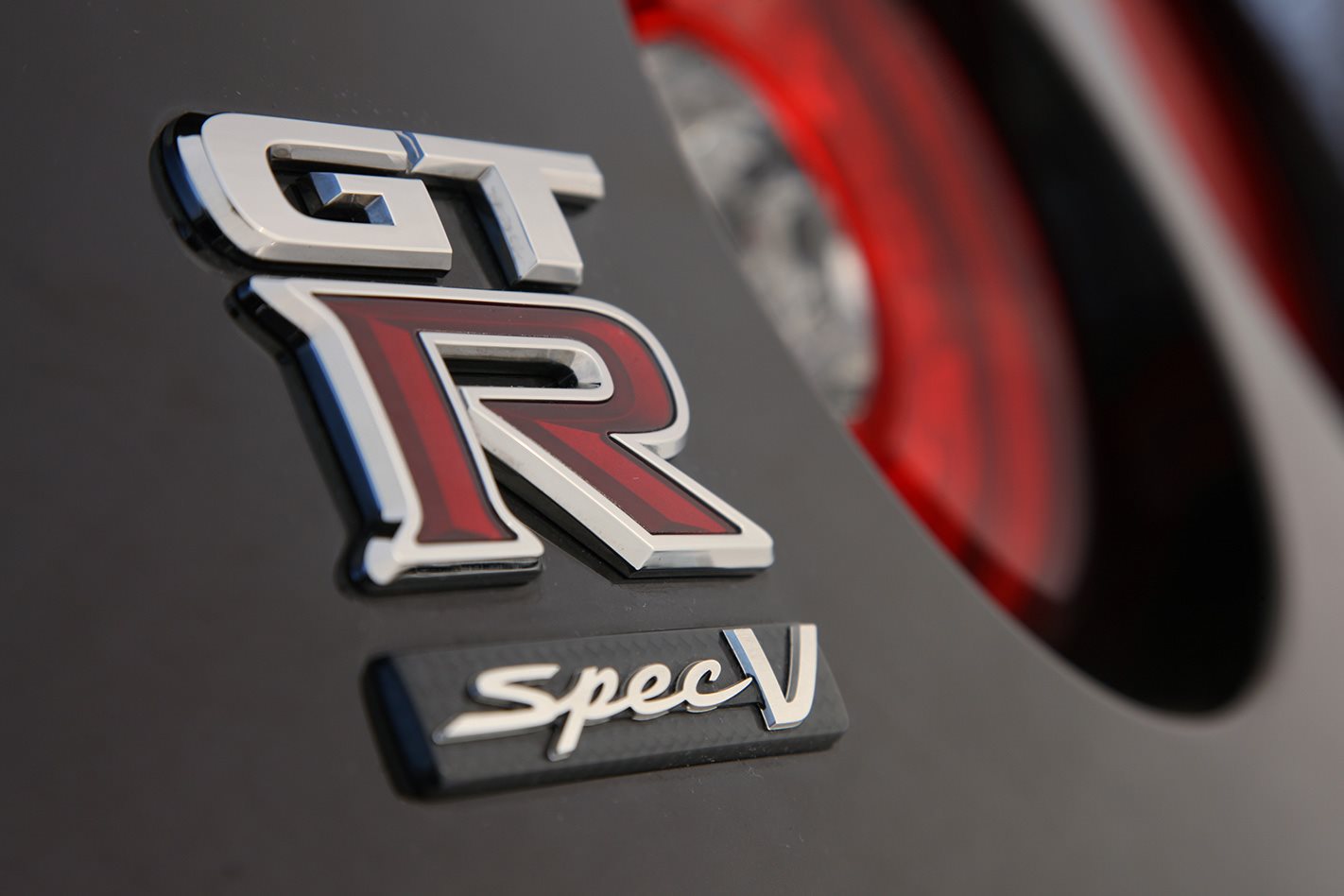 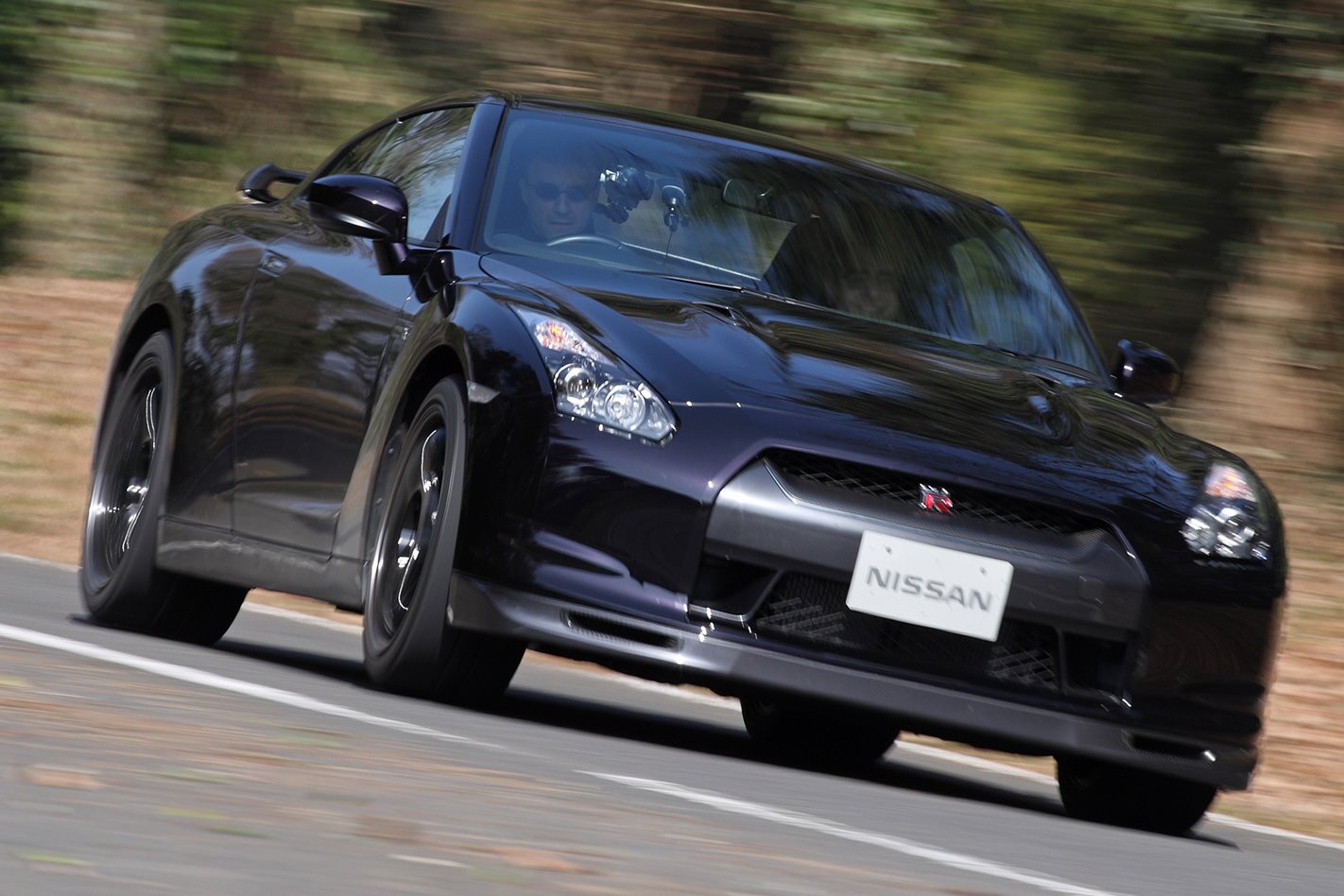 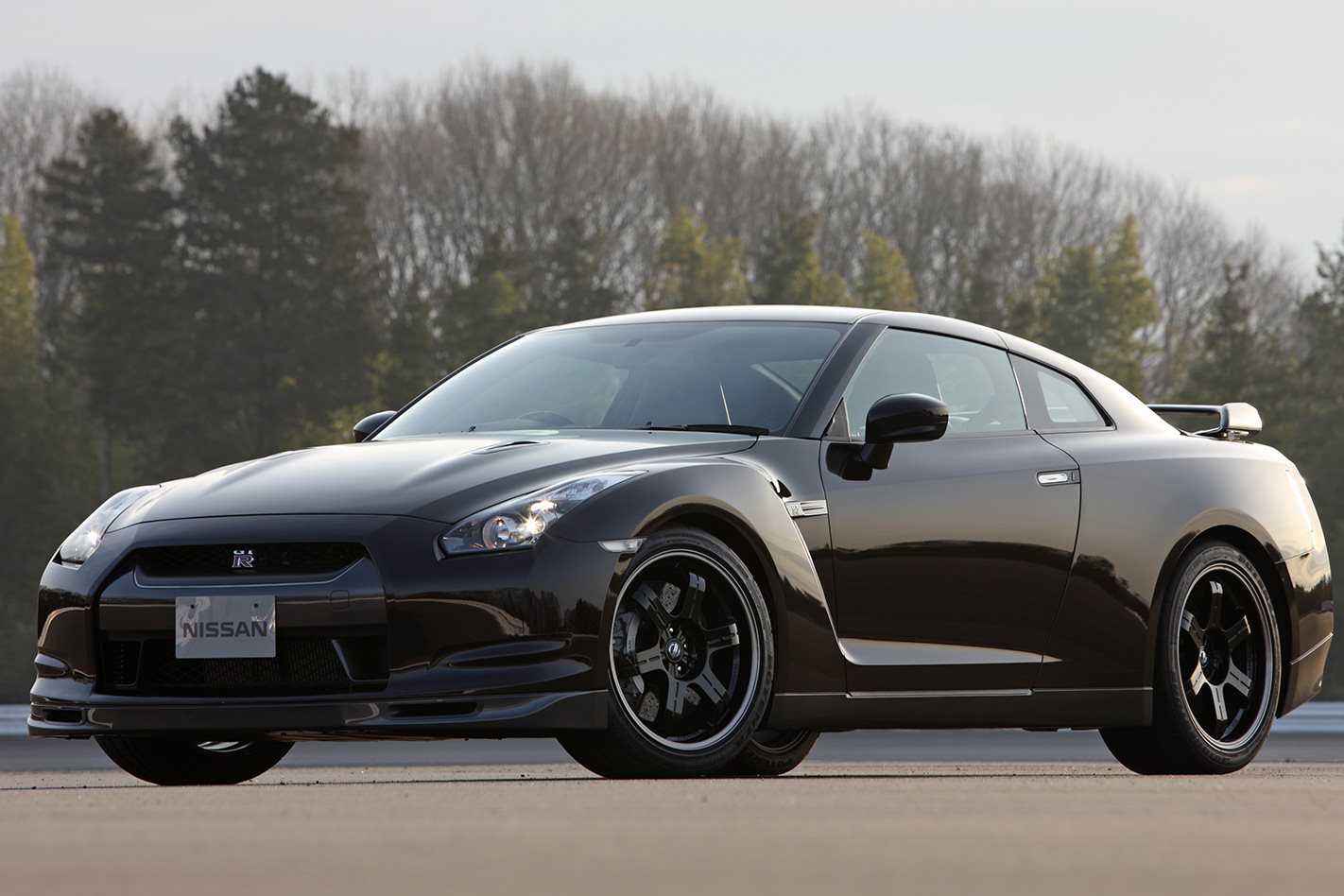 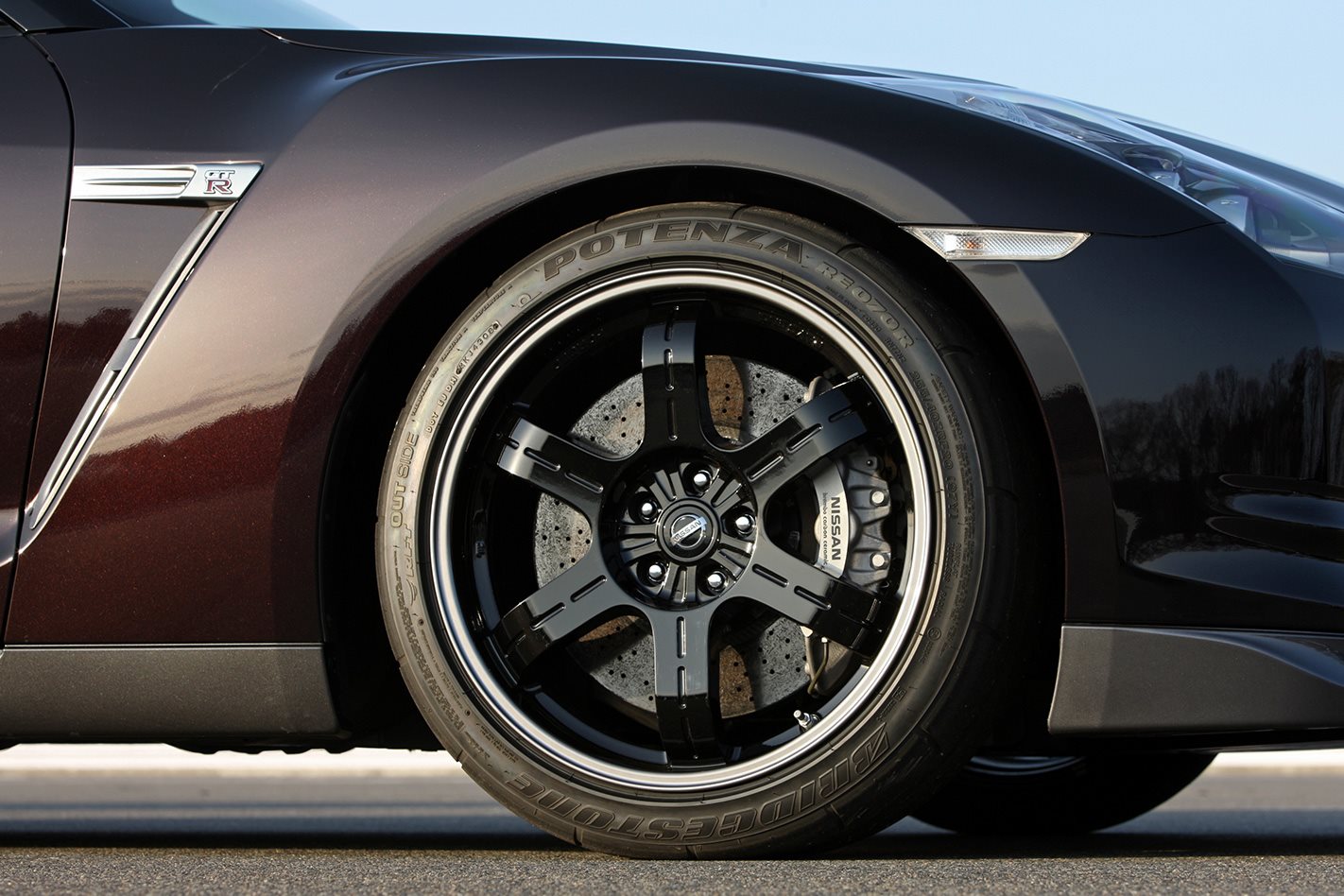 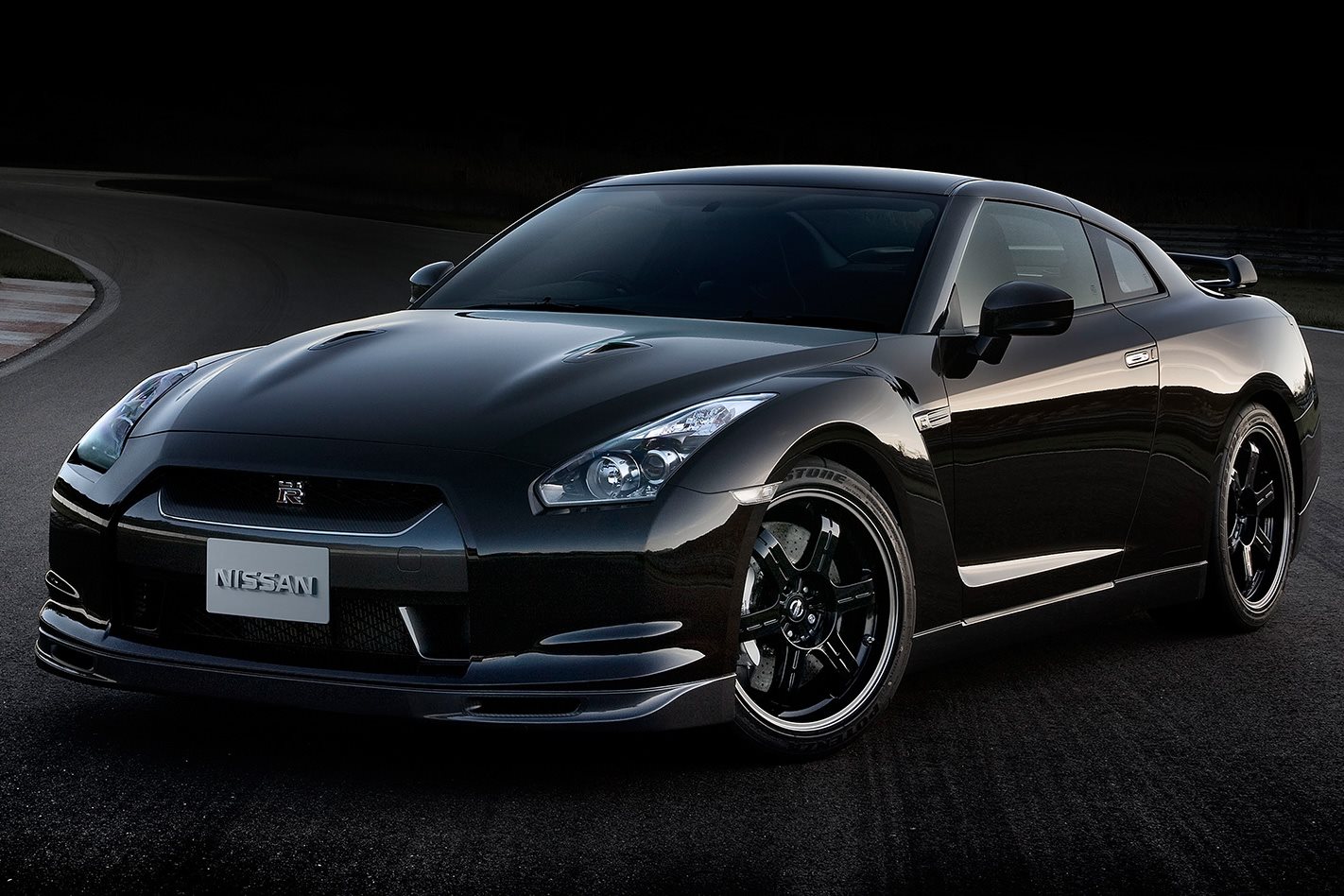 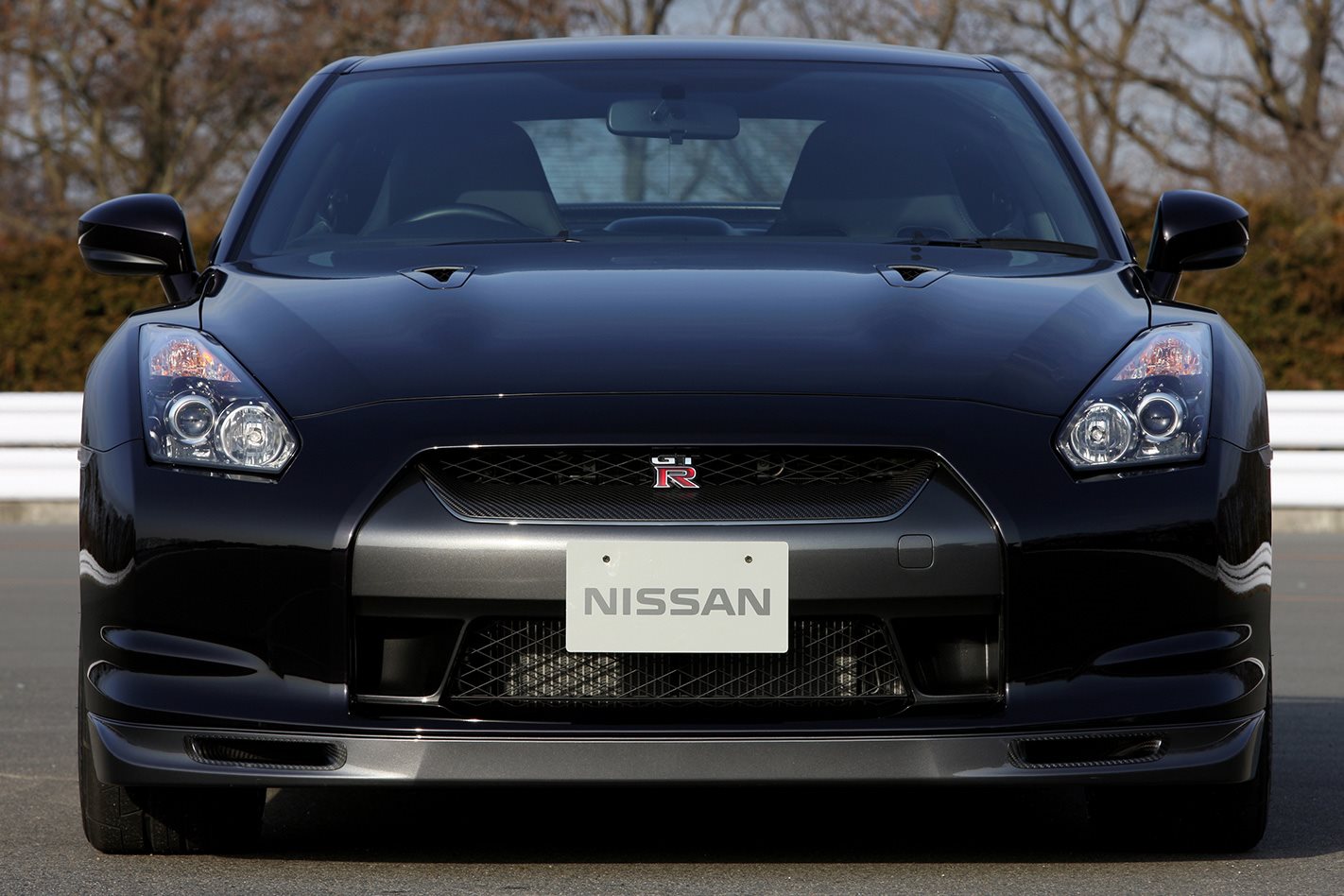 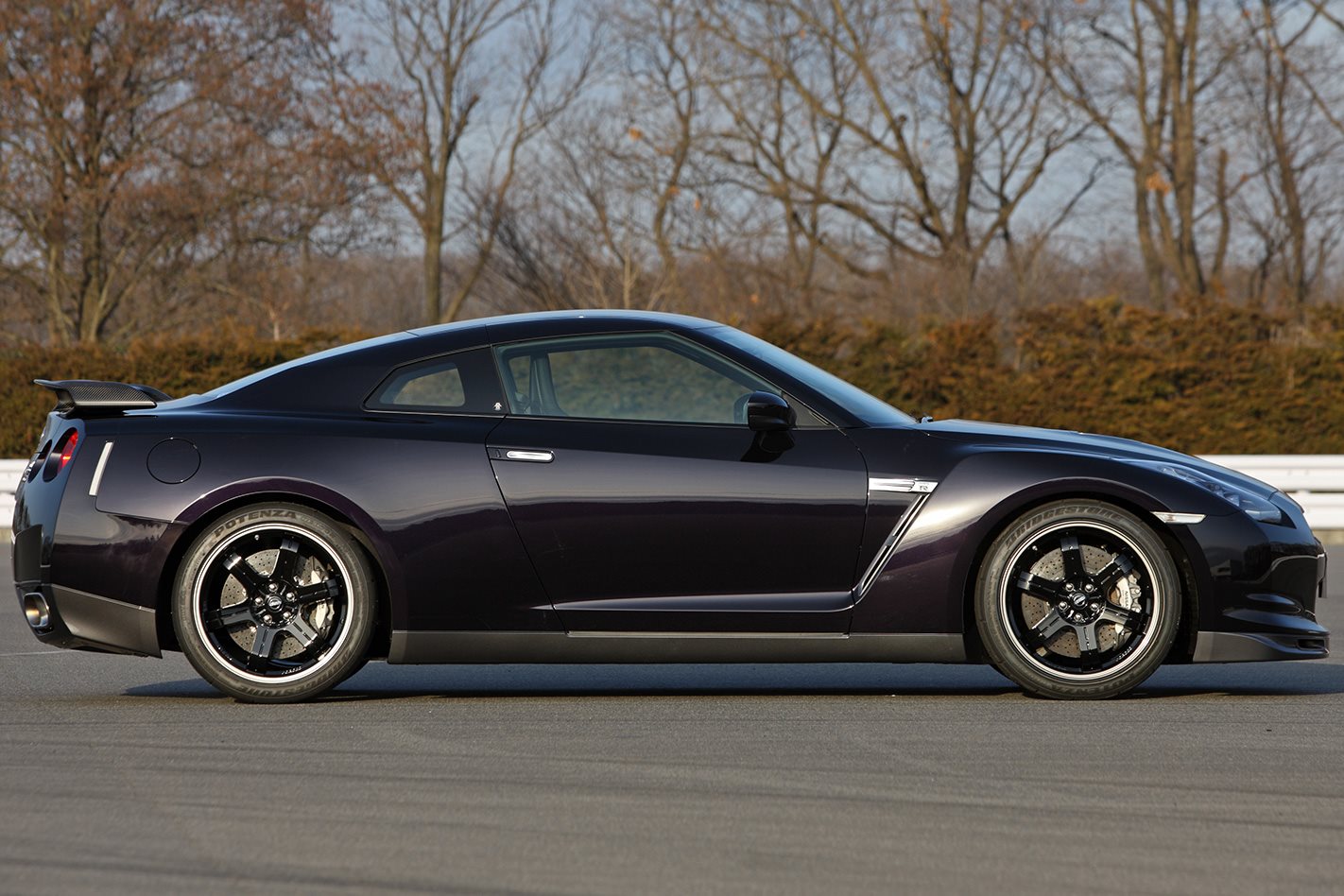