All you need to know before wandering into a Mazda dealership.

The Mazda 2 is consistently one of the bestselling cars in its segment, which includes compelling rivals such as the Volkswagen Polo. The little Japanese hatch or sedan proves that driving a city car doesn’t have to be boring, and has funky good looks to boot.

If you are looking to add one to your garage, here is everything you need to know about the price, standard features, pros and cons, and which version we would recommend. 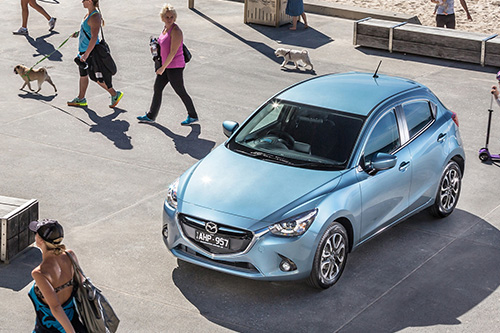 Every Mazda 2 comes with cruise control, power windows and an AM/FM radio with a single-disc CD player and USB input. Audio controls on the steering wheel and hands-free Bluetooth phone and audio connectivity, push-button keyless start, and a tilt and reach adjustable steering column, along with rear parking sensors, and six airbags. An option available on all Mazda 2s for around $400 is Smart City Brake Support, a form of automatic emergency braking that operates at speeds below 30km/h. Every Mazda 2 carries a three-year, unlimited kilometre warranty.

The Mazda 2 looks good, feels nice inside, and is more fun to drive than most city cars. Its 1.5-litre engine is very easy on fuel and delivers plenty of power. Strong retained values and a 12-month service interval help make it a smart choice.

The list of cons for this car is rather short given Mazda added cruise control to the least costly models. Perhaps squinting at the tiny tachometer in less expensive models (upper spec grades have a different instrument design) could be annoying if you want to know what the engine is doing. The spare tyre is a space saver, and its 80km/h recommended top speed could bother you if you get a flat far from home. But for a car intended mainly for city use, it’s a defensible choice because it frees up some boot space.

The one to get

The Mazda 2 Maxx, in either hatch or sedan, is our pick of the line-up. Both bring desirable features such as alloy wheels, a reversing camera and a 7.0-inch touchscreen loaded with the Pandora, Stitcher and Aha internet radio apps. Its steering wheel and gear-lever handle are trimmed in leather. Wheels are made from aluminium alloy and look nicer than the plastic-trimmed steel wheels on the least costly model, the Mazda 2 Neo. However, the Neo is an appealing base model that represents very good value.