This year’s Beijing motor show will definitely deliver a few surprises when the curtains drop on April 25. Here’s what we expect to see so far.

Though it will be built and sold exclusively in China for the time being, a European – and maybe even Australian – launch for CX-4 is not entirely ruled out. The Beijing show will give us the chance to see how much the production car differs from the Koeru concept that previewed CX-4 at the Frankfurt motor show last year.

A selection of shadowy teaser images released by Volkswagen have given us a glimpse of a new Volkswagen SUV, most likely a preview of next-generation Touareg, to be shown at the Beijing motor show. Plug-in hybrid technology has been confirmed for the concept along with power outputs of 280kW and 699Nm, and a 0-100km/h sprint of six seconds.

What we can see of the styling suggests a burly SUV with the same upright and muscular proportions of the recently released Tiguan mid-size SUV. Strips of LED lighting up front give off a Tron vibe, with LED tail lamps featuring at the back.

Infiniti has offered a peak at its new SUV concept, dubbed QX Sport Inspiration, to whet our appetites in the lead up to Beijing. It’s the first look at a new mid-size SUV Infiniti plans to add to its range of next-generation vehicles. 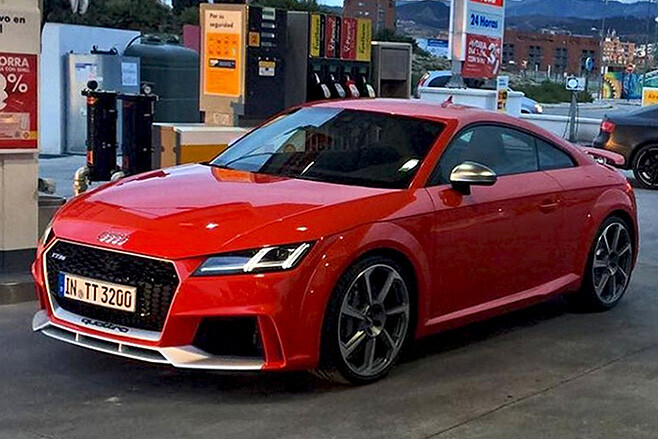 Though an image of one very authentic looking Audi TT RS was leaked sans camouflage (pictured above) around the time of the Geneva motor show earlier this year, we are still waiting for an official reveal by Audi.

Beijing seems like a potential venue for this, and could also serve as the appropriate platform for Audi’s performance boffins to confirm rumours about the bonkers numbers associated with TT RS. Think: sub-4-second 0-100km/h acceleration and around 300kW from its five-cylinder turbocharged engine.

The new Porsche 718 Boxster convertible (pictured above) has already arrived, but its hardtop counterpart is yet to materialise. The Porsche 718 Cayman will use the same all-new turbocharged four-cylinder engines as found in 718 Boxster. They’re controversial, but devastatingly effective, and the Cayman body will provide an even better stage for them to perform on. It’s unlikely to look much different to a Boxster with a solid roof, but it will still be pretty to stare at!

Renault’s next-generation large SUV will pick up an as-yet unknown new moniker. The name ‘Maxthon’ seems to be a front-runner, despite Renault’s senior vice president of marketing, Michael Van Der Sande, saying, “There is a fairly high chance the name will start with a C or a K.” A debut at Beijing should reveal all.

The roomy five-seat SUV will be built in China on the same platform as the seven-seater Nissan X-Trail and use Nissan engines. Spy shots of the SUV in test mode suggest styling similar to that of its smaller SUV sibling, the Renault Kadjar.

Another murky teaser image, this time from Lexus, hints at a facelift for the IS sedan range. It shows a revised LED headlight design and heavily sculpted body lines exaggerating the now signature Lexus spindle grille. It follows a similar update received by bigger brother sedan, the Lexus GS.

Further details are thin on the ground until the Beijing show, though after the recent addition of a new 2.0-litre turbo unit to the IS range it’s unlikely we will see any major changes to the line-up of engines.