A facelift for the Volkswagen Amarok ute has been revealed in a series of sketches by the German brand.

Changes to the headlights and grille bring Amarok into line with the latest VW styling seen on Passat, Tiguan and the Touareg concept to be shown at the Beijing motor show next week. Other exterior updates include a new scuff plate up front and restyled LED tail lights at the back. External dimensions remain the same at 5.25 metres long and 2.23 metres wide.

Inside is where the biggest changes appear. Volkswagen has concentrated on squaring off all design features and concentrating on horizontal and vertical lines. “They make the Amarok more attractive as a pick-up and also appeal to customer groups that until now have shopped in the classic SUV segment,” reads a statement accompanying the illustrations.

The instrument panel, dashboard and climate control vents are all redesigned. Volkswagen says, “Rejecting round contours makes the front and interior appear more striking and pronounced.” 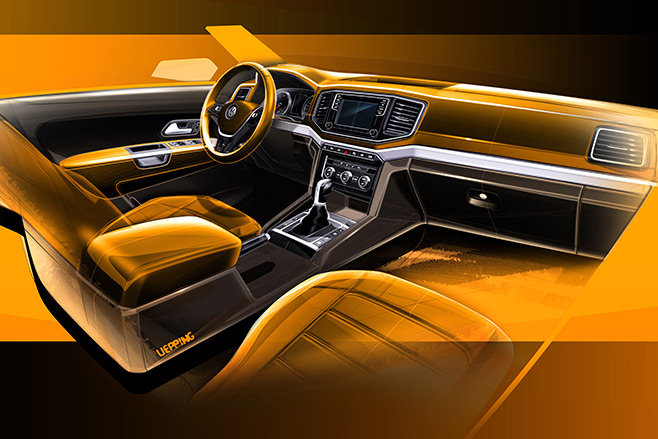 “Like previous iterations, the latest Amarok will combine passenger car-like on-road manners with full off-road capability. The Amarok fulfils all that is expected of a classic pick-up in both style and concept.”

In these initial sketches, big, square wheel arches house larger alloy wheels. They’re probably not representative of the actual wheel sizes we’ll see when the facelift is properly revealed, but Volkswagen has said the updated Amarok will feature rim sizes that are “considerably increased and strengthen the appearance of the power athlete.”

The refreshed Amarok is expected to go on sale in Australia before the end of the year. 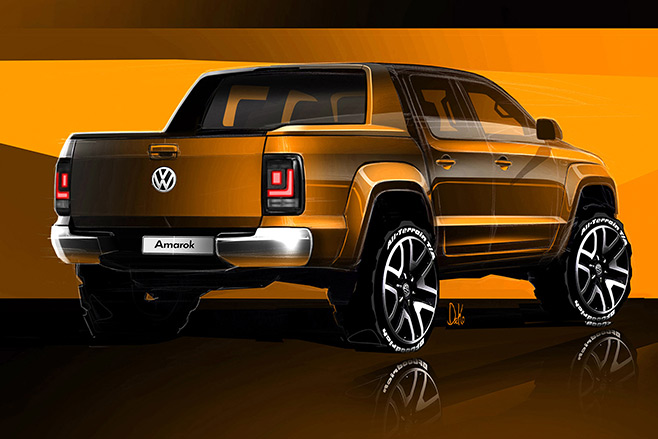 At this stage no engine or gearbox changes have been mentioned. It is likely the existing 2.0-litre four-cylinder turbo diesel will remain, as will the six-speed manual and eight-speed automatic transmissions. Whether or not it will be joined by another engine option remains to be seen.

Find out more about the current model by reading our Volkswagen Amarok range review.