There’s no denying that you can find a lot of value in buying a used car. But you’re also taking a chance that the car has been cared for and serviced, and will get you further than the former owner’s suburb before breaking down and costing you thousands in unexpected repairs.

Sometimes, it’s safer and less stressful to buy a new car instead. That way you know you’re getting a vehicle in top working order, and with the peace of mind that it has a warranty should anything go wrong.

The good news is that new cars have never been more affordable, or better. Cars like the Kia Rio, Holden Barina, Mitsubishi Mirage and Honda Jazz are all less than $20,000 to buy (driveaway) and will guarantee you five years or more of untroubled motoring.

2019 is shaping as another bumper year for new car buyers on a budget, with significant updates to a number of key players at the sharpest end of the affordability chart – no matter your taste - plus there’s a couple of very interesting newcomers on the horizon that promise to shake up the establishment. Here are 15 options coming to Australia in 2019 that start at under $50,000.

Spun-off from the new Volkswagen Polo platform, Audi’s box-fresh second-generation A1 city hatch promises to inject a great deal more sophistication into the bottom end of the German brand’s product portfolio. Now measuring over four metres long, it’s physically bigger than before, but a range of new powertrains – including a 1.5-litre turbo four with cylinder deactivation – move the mechanical game along as well. Inside there’s a greater sense of maturity in the cabin furnishings, plus plenty of infotainment tech.

BMW is being pretty cagey on this one, but let’s have a swing anyway… Swapping to front wheel drive for the first time, the BMW 1 Series will still yield a performance variant – only this time it’s likely to mimic the M5 by offering all-wheel-drive in conjunction with a turbocharged four-cylinder petrol engine. This will pitch it up against Mercedes-AMG’s inbound A-Class hotties.

Given the potential change to a front-wheel-drive layout, it does put questions marks around the fate of cars like the M140i – it may well even be given a stay of execution until BMW’s first real FWD hot hatch is, err, hatched.

The C5 Aircross has morphed into an SUV that harks back to comfortable Citroens of old.

Citroen says the new C5 Aircross will be the ‘most comfortable and modular SUV in its segment’ by drawing on its predecessor’s plush hydro-pneumatic suspension with tech that it calls “Progressive Hydraulic Cushions”. Ride comfort will be further enhanced by ‘Advanced Comfort’ seats that filter out road disturbances. The 4.5-metre-long C5 Aircross will make the most of its spacious interior by offering a wide centre console and flexible rear seating that can expand boot space from 580 to 720 litres. The Fiesta has long been a dynamic darling of the compact hatch set, and Ford will be cranking up the athletic ability of its next-generation Fiesta next year with the Fiesta ST hot hatch.

However, the ST will be the only way you’ll get to put a new-gen Fiesta in your driveway, for Ford Australia has declined to bring lesser models in the range to local showrooms due to unfavourable exchange rates putting the squeeze on pricing.

As for the ST, we’ve already driven it and declared it to be one of the best hot hatch options at its expected high-$20K price point. Expect to see it land sometime in the second quarter. The Focus hatch has already received its full model changeover by now, but the family will grow when the Focus Active rolls into Ford showrooms in 2019.

Following a similar format to the Impreza-based Subaru XV but described by Ford as a passenger car rather than an SUV, the Focus Active will bridge the gap between the regular Focus hatchback and Ford’s bona-fide SUV line-up. The ‘missing link’, if you will.

Only one engine, a 134kW 1.5-litre turbo petrol, will be offered, and the Focus Active is strictly front-wheel drive with an eight-speed automatic. 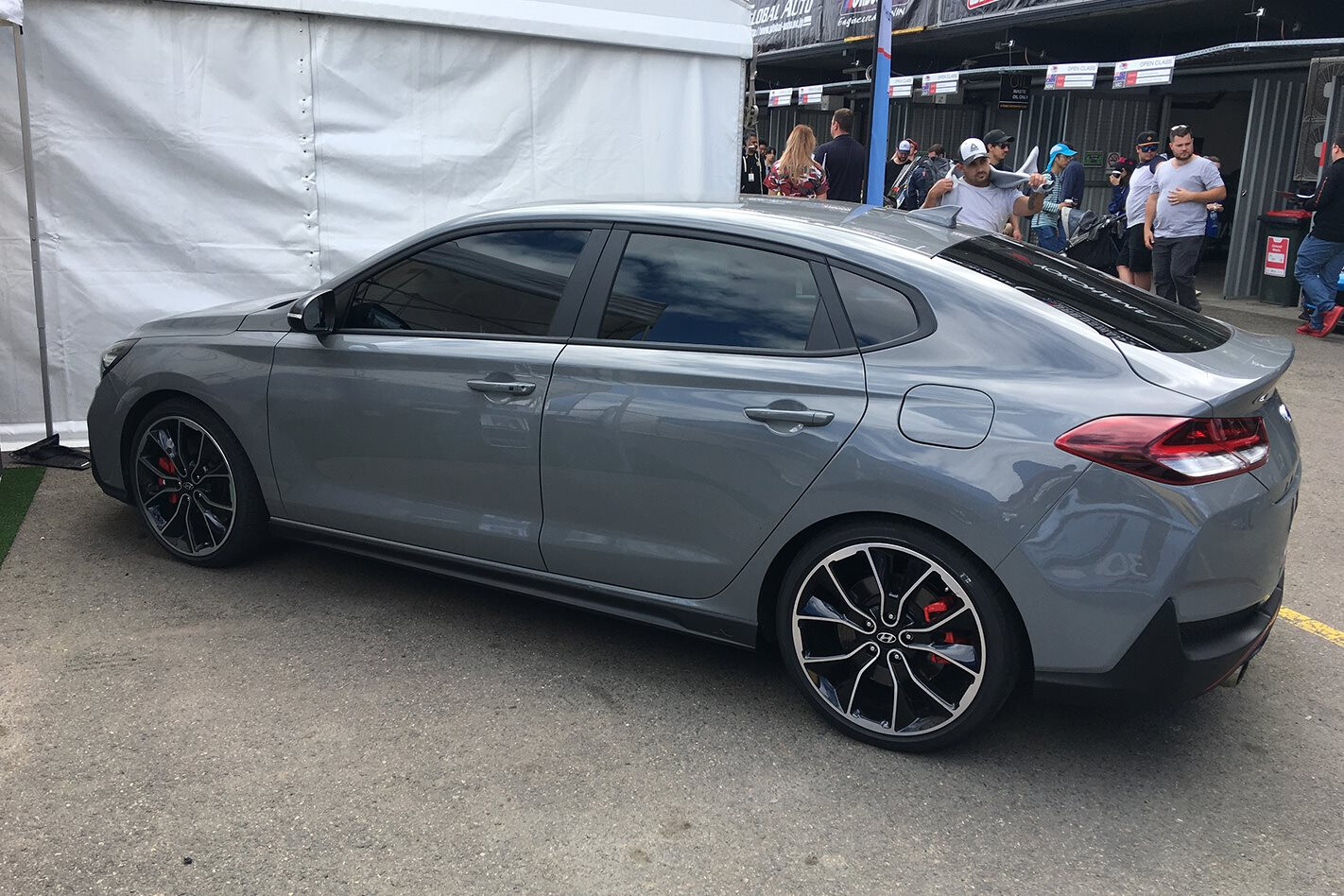 While some overseas markets enjoy the ability to buy an i30 in a more mature ‘four-door coupe’ bodystyle, Hyundai Australia says the i30 Fastback is not coming our way… unless you spend big on the high-performance N variant.

Fatter profit margins at the circa-$40k mark mean the European-built i30 N Fastback actually makes economic sense for Hyundai to sell in cost-sensitive Australia, even though lesser variants aren’t. For buyers looking at the existing i30 N, the impending option of a grown-up looking Fastback may prove quite alluring, especially as it retains all of the go-fast mechanicals of its hatchback brother.

Exact launch timing has yet to be settled, but the i30 N Fastback’s price should only wear a very modest premium over that of the hatch.

An all-new version of the archetypal Jeep arrives early next year with looks that still hark back to its 1940s origins.

The all-new Wrangler will have plenty of 21st-century technology under its familiar looking skin including a new 2.2-litre turbo-diesel engine, eight-speed auto, and a huge leap in interior presentation and equipment.

Jeep is touting even greater off-road ability, but with suspension retuning aimed at improving road manners and ride comfort to overcome the current model’s weaker points. One weak point it seemingly can’t overcome is safety – with EuroNCAP deeming it worthy of just one star out of five during independent crash testing.

The 2019 Wrangler range includes the entry-level Sport, the Overland and the more off-road focused Rubicon.

In the middle of the year Mazda Australia will change over its popular Mazda 3 range with an all-new generation hatch and sedan, and while local details such as range structure and pricing are still far from ironed out, the design of the new 3 shows that Mazda’s mainstay small car is set to be a real looker. The hatch and sedan will be quite visually distinct from the B-pillar rearward – certainly more so than the current generation – and the local powertrain line-up is likely to include Mazda’s innovative and ultra-efficient SkyActiv-X supercharged compression-ignition engine.

MG aims to boost sales in Australia with its premium-equipped new-generation medium SUV.

Based on the X-Motion concept revealed at the 2018 Beijing Motor Show, the MG GS’s attractive lines appear to have been penned to directly take on the Mazda CX-5, with state-of-the-art driver assistance tech and German-rivalling upmarket cabin appointments to sweeten the deal.

A major update and facelift of the popular dual-cab ute.

It’s not quite a full new model but with more than 2400 changes including new sheet metal, updated six-speed auto, more cabin equipment and safety tech, the 2019 version is significantly different. A new flagship is also expected at a later date bringing a tough truck rival to the Ranger Wildtrak and HSV Sportscat. Ooh la la! Who knew a mid-size sedan could look this good?

Strong visual links with the 3008 and 5008 are in evidence both inside and out (a very good thing), and the new 508 looks modern, dignified and flaunts a far more premium aura than most would expect of the French brand. Lightweight engineering also promises more than a skerrick of dynamic aptitude as well. Translation: it’ll drive like a dream when it gets here in mid-2019.

Renault joins the one-tonne ute revolution at last, but is it fashionable to be late?

After a protracted gestation and a drawn-out arrival date, it looks like Renault will finally weigh into the potentially lucrative dual-cab ute contest on red dirt.

Like the Mercedes-Benz X-Class, the Renault Alaskan also takes its underpinnings from the popular Nissan Navara, and although exact Australian specifications are yet to be confirmed, it’s likely the French contender will offer a high-end version with lots of kit as well as a more affordable workhorse at the entry point.

After a two-year hiatus, SsangYong is back on Australian turf with a factory backed operation and a four-model assault for its relaunch. Leading that charge is the Musso one tonner, which makes a good case for itself with standard AEB, enticing prices and an unbeatable seven-year warranty.

Suzuki goes back to the future to revive its mini 4x4’s iconic styling and serious off-road cred.

It has questionable road manners and safety, but if initial reaction is any guide the new Jimny will be one of the most popular releases of 2019. The boxy fourth-generation Jimny retains its ladder-frame chassis, live front and rear axles and dual-range transmission that’s still activated by a proper lever.

There a few modern touches including a large infotainment screen with Apple CarPlay and Android auto connectivity. It will also come with a more powerful 1.5-litre petrol engine (up from 1.3L) petrol four-cylinder engine with a choice of five-speed manual or four-speed automatic transmissions.

One of the most significant new cars for 2019, the all-new Toyota RAV4 promises to shake up the highly competitive medium SUV market by setting new benchmarks in terms of standard features and modern powertrains, including a petrol/electric hybrid. It will have the option of torque-vectoring AWD and multi-terrain drive modes to help it grip, and spawn a more off-road focused version called the ‘RAV4 Adventure’. The new RAV4’s bigger exterior dimensions will result in significantly more interior space and comfort, while the interior design will be more upscale than the current model.