It seems the Mazda 3 is getting set to receive a mid-life update in the not-too-distant future.

A leaked image appears to show the new face of Mazda 3, called Axela for the Japanese domestic market.

Changes are slight and evolutionary, bringing the popular hatch into line with more recently released Mazdas like the Mazda CX-3 and CX-9.

A redesigned grille now fully encompasses the Mazda badge, and no longer extends above the headlights, instead meeting them at the lower corners and merging into the remodelled lamps themselves.

The current Mazda 3 (pictured below) has been on sale since 2013. 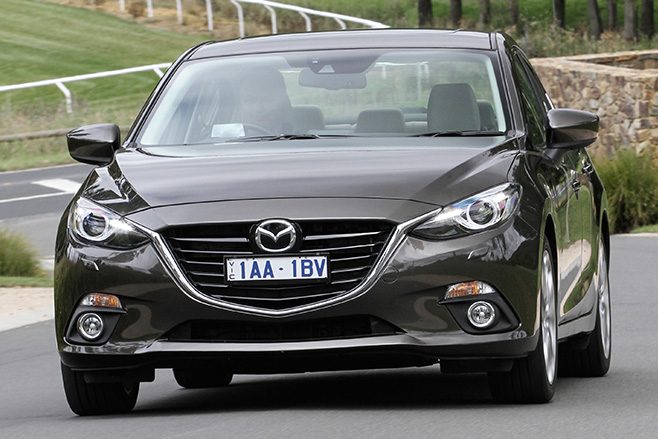 The bumper bar has a restyled air intake beneath the grille, and simplified light clusters on either side with what appear to be LED driving lights rather than the conventional fog lights of the current car (pictured above). Reshaped turn signal indicators sit above the driving lights and have been added to the side mirrors.

According to the text on the leaked brochure, the car pictured features Mazda’s 2.2-litre twin-turbo diesel engine.

The current Mazda 3 arrived in 2013 and is yet to receive any visual tweaks, so the timing is about right as far as mid-life updates go. Alterations to the interior and rear of the car are also expected.

If the leaked image is the real deal, an official debut of the refreshed Mazda 3 is likely to happen in the second half of this year, with an Australian arrival closer to 2017.