Toyota to boost efficiency without turbo tech, 2018 Camry to pave the way forward

The next-generation Toyota Camry will set the template for the automaker’s future petrol engines.

Speaking at the CAR seminar in the US this week, Toyota’s US powertrain program manager Ben Schlimme said the fuel-efficient tech that underpins the 2018 Camry’s engine will eventually roll out across the manufacturer’s entire petrol engine line-up – including bigger V6 and V8 powerplants.

“Dynamic Force is not solely aimed at the 2.5-litre engine”, Schlimme said. “We are working to bring it to other segments.”

But why is this significant?

As many rival manufacturers embrace turbocharging as a means of extracting more power from smaller engines – and delivering greater fuel efficiency as a result – Toyota believes the 152kW 2.5-litre engine of the next-generation Camry is evidence that turbocharging isn’t necessarily the best route for cutting fuel consumption.

That 2.5-litre engine, an evolution of the current Camry’s 133kW four-cylinder unit and part of the ‘Dynamic Force’ range of powertrains, is able to deliver an astounding 41 percent thermal efficiency - meaning it’s able to extract 41 percent of the energy of the fuel it burns. That may not sound like a lot, but petrol combustion engines – especially non-turbocharged ones – typically have a much lower thermal efficiency of between 25 and 30 percent. 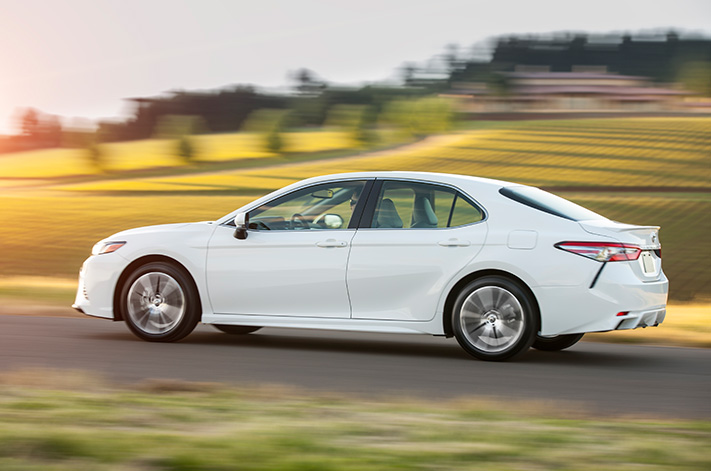 In the realm of naturally-aspirated engines (engines that don’t use a supercharger of turbocharger), Mazda is the only other major manufacturer that achieves similar thermal efficiency from a mass-produced petrol engine. Its SkyActiv range of petrols, which power everything from the Mazda2 to the CX-5 and Mazda6, are capable of delivering a thermal efficiency of around 40 percent.

Toyota, like Mazda, has largely resisted the trend of downsizing engines and adding turbos, though it has dipped its toe in the water with the 1.2 litre turbocharged four-cylinder of the Toyota C-HR (and foreign-market versions of the Corolla hatch).

However Schlimme’s comments indicate Toyota’s mass-market passenger cars will continue to eschew turbochargers in favour of efficiency-optimised naturally-aspirated engines. Turbos and their associated hardware do add cost to a car, after all, and profit margins are slimmer in the non-luxury market. What works for a six-figure Lexus won’t necessarily work for a Camry.

The next-generation Camry was revealed at the Detroit Motor Show at the start of this year [https://www.wheelsmag.com.au/news/events/1701/2017-detroit-motor-show-all-new-2018-toyota-camry-revealed], and is set to go on sale locally towards the end of 2017.

So far three engines have been confirmed for Australia: the new 2.5-litre four-cylinder, a petrol-electric hybrid of the same capacity, and an all-new direct-injection 3.5-litre V6 variant that marks the return of the ‘Camry V6’ badge.