Father Christmas brings a COTY contender back for the holidays. Alex Inwood unwraps the Audi Q7.

It's no secret we like the all-new, second-generation Audi Q7. Anyone who read Wheels magazine's Car of the Year issue will know it came tantalisingly close to winning our most coveted award, thanks to a blend of cutting-edge technology, sorted dynamics and supreme refinement.

But while we’ve spent thousands of kilometres testing the Q7’s ability, we’re yet to live with one on a day-to-day basis. Which is why I grabbed the keys to this Q7 for the Christmas break. This test, while not a proper long-term exercise, might still expose any annoying bugbears that could undermine the ownership experience.

As well as seeing if Audi’s SUV could cope with the choking traffic around my inner-city Melbourne home, I’d planned a 1000km road trip to visit family in central NSW. 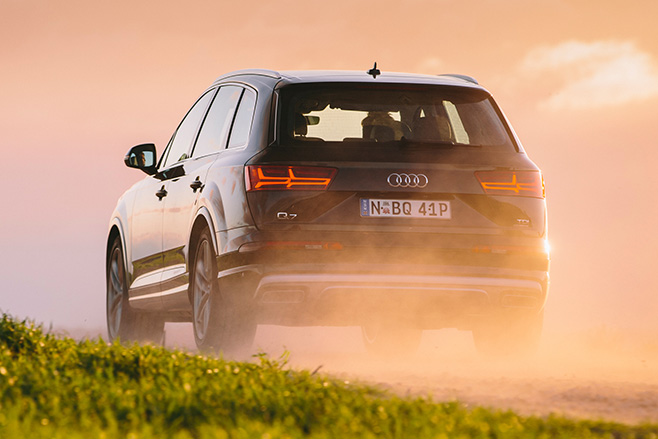 The Q7 might have dropped 240kg over its predecessor, but there’s no escaping the fact that this 2060kg SUV is still a big bus. Yet on crowded city streets it doesn’t feel it. The light electric steering imparts an unexpected sense of nimbleness, undermined somewhat by a rather rotund 12.4-metre turning circle.

Out on the highway, the Q7 comes into its own. This is the type of interstate slog Audi designed it for, so it’s no surprise the Q7 chewed through the 10-hour journey with ease. Four passengers and the family dog fit with space to spare, the air conditioning is brilliant, the whisper-quiet cabin has class-leading refinement and the ride on optional air-suspension is silken and cosseting, well worth the additional $4950.

It was surprising how little diesel the smooth-spinning 3.0-litre TDI drank. COTY testing on twisty rural roads saw the Q7 return a surprisingly high figure of 11.1L/100km, but on the expanses of the Hume it sipped at 7.3L/100km. Overall, with city driving included, the efficiency reading was 7.9L/100km, which is hugely impressive for a two-tonne SUV with this level of effortless performance.

Less convincing is the Eco setting in the Drive Select system. It failed to return any real efficiency gain and instead robbed the torquey Q7 of its ability due to a doughy throttle and sluggish engine response. Comfort mode is the smarter option. 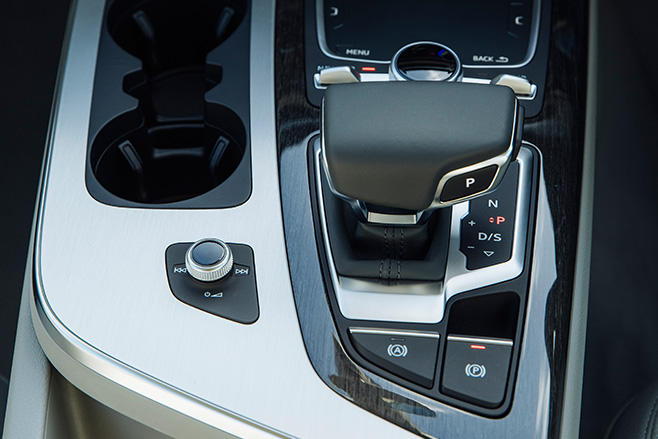 The most useful storage option is a cubby behind the gearstick that’s big enough for two phones, house keys and wallet

The idle-stop system takes an infuriatingly long time to restart, but other systems are more successful, including the optional adaptive cruise control and lane-keep assist.

The retractable 8.3-inch centre screen garnered praise as it allowed passengers to control the sat-nav and music; good luck doing this in the new TT, with its driver-focused virtual cockpit. The only real complaint levelled at the Q7’s beautifully made interior was that the front passenger seat is too flat and lacking in lateral support.

Are these minor foibles enough to tarnish the Q7’s polish? Absolutely not. During its three-week stay, the Q7 dealt with city traffic, thousands of freeway kays and cracked rural roads as easily as Roger Federer would breeze through your local Tuesday night tennis comp. So if you’re looking for a big, luxurious seven-seat SUV, your hunt just might be over.

The fact that the Q7 feels so at home on Australian roads shouldn’t be a surprise. Australia’s penchant for large luxury SUVs is so high we rate as the sixth-biggest market for Q7s worldwide. Oz falls outside the top 10 for every other Audi model. Australia is so important to the Q7’s success that Audi conducted more than 11,000km of testing on Aussie roads to ensure its SUV flagship can cope with our barren land’s rough roads and extreme temperatures.