Can’t spring for the high-performing M3 and C63 flagships of the BMW 3 Series and Mercedes-Benz C-Class ranges? Never fear, for we’ve put their budget-friendly alternatives to the test.

When it comes to powerful luxury sedans, just how much do you really lose by stepping down to the circa-$100K zone? Do the Audi S4 quattro and Mercedes-AMG C43 4matic sit forever in the shadow of the heavier-hitting Alfa Romeo Giulia QV, BMW M3 and Mercedes-AMG C63, or are they plenty of car for most people, most of the time?

It’s handy that the S4 and C43 have ample design distinctions both inside and out, because if they were debadged and styled like whitegoods, you may initially struggle to tell them apart. They’re dimensionally close, both run 3.0-litre V6 engines fed by turbochargers; two for the AMG, one twin-scroll unit nestled between the cylinder banks in the S4. 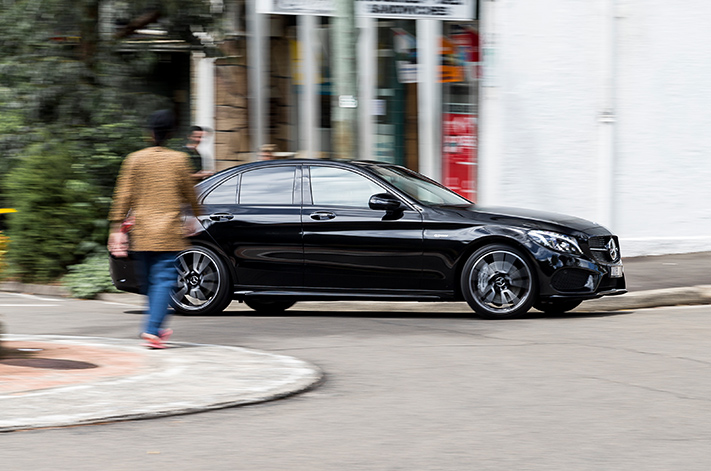 Both use torque-converter autos; the Audi with eight ratios, the AMG nine. Both drive all-four wheels and are capable of sending the bulk of their torque rearward. Both are lavishly equipped and both ooze ample driver appeal. 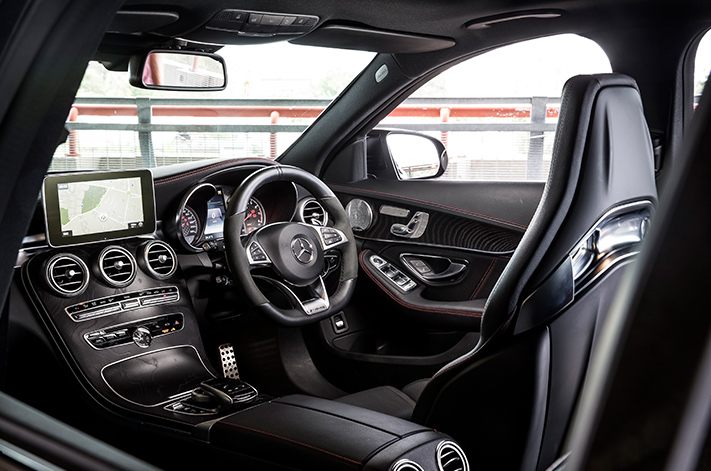 You’ll need to hit the options list to get either of them looking as you see them here, though – the AMG soaked up around $9K in paint, seats and performance exhaust, for a total of $110,000, while the Audi came in at $116,000 with paint, audio, extra tech and flashier trim. You’ll also want the optional sports differential ($2950) in the S4, as it can send bulk torque to an individual rear wheel and brings a more pivotal, adjustable feel from the rear end in hard driving.

Hit some properly challenging roads and you’ll feel the C43 has a bit more suspension compliance than the ultra-firm AMG C63 S, but its comfort setting still doesn’t cut your butt much slack. You get the sense that the chassis engineer who deemed the ‘comfort’ setting truly comfortable may sleep on a granite mattress. Big expansion joints still thump and slap, while rough roads can bring audible protests through the structure and dash. 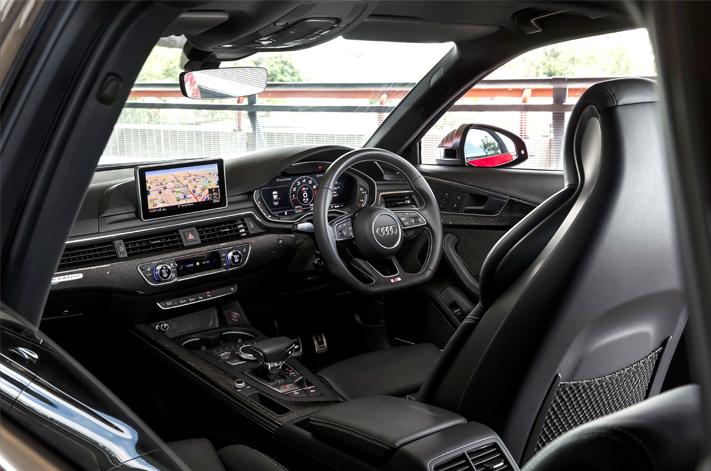 The S4 instantly feels more supple and pliant, but more than that, it breathes better with the road, and instantly contrasts with the slight restlessness of the C43’s chassis. In lots of ways, this first impression of composure and machine-edged precision is a pointer to the core differences in character between the two cars: the Audi is ultra-refined and polished; the AMG has a bit more mongrel in its genes.

You know it from the moment you stick the Benz in its most aggro Sport+ setting (there’s no Race mode like there is in the C63), allowing the V6 to dig in early, and hammer through the mid-range. Up top, it has a keenness that the Audi can’t quite match. You get the light-artillery sound effects on over-run, too – a touch contrived perhaps, but who doesn’t like the percussive barrage of distant mortar shells from an AMG exhaust? 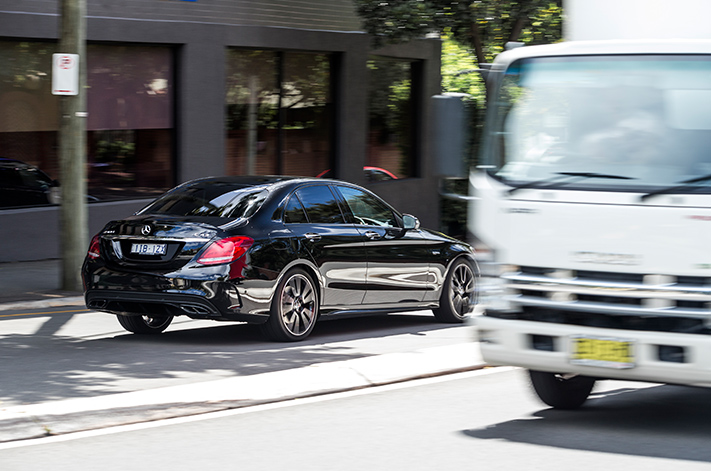 Anyone with fond memories of the previous- generation S4’s supercharged V6 may find the new turbo V6 a touch anodyne, and maybe a little uninspiring near the redline, but the reality is it makes more torque and a bit more power than the old blown unit, and is actually a really lovely thing to slip behind regardless of conditions.

Like the Alfa, the S4 is happy to adopt stealth mode, gliding along with little apparent effort, the exhaust switched to deliver a distant, contented hum; wind and road noise set firmly to mute. 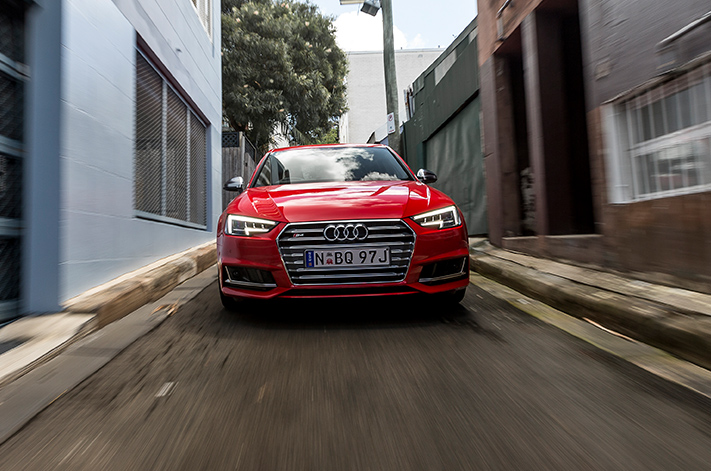 It’s this part of the Audi’s character that actually starts to win your affections, especially ensconced in the designer-cool cabin, all sleek surfaces, quilted stitching, and glossy carbonfibre. Its steering, too, is less try-hard than the AMG – not as quick in terms of turns lock-to-lock, but lighter, pointier, without the overt masculinity the C43 wants to impart.

In terms of outright performance, there’s not a whole lot to split them: both claim 0-100km/h in high fours, both will actually do it in low fives. , but still plenty to keep you in the game, and ample to test the power-down abilities of the respective all-wheel-drive chassis. 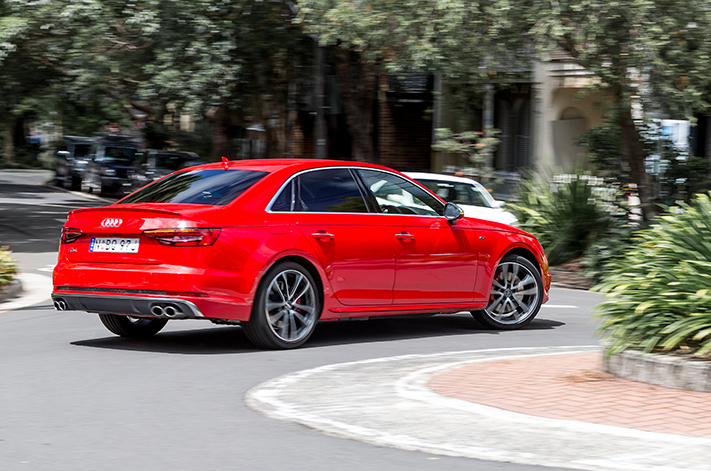 Which is the other area where this pair do their thing differently from cars like the M3 and C63 S. Where those machines goad you to chase the throttle and manage the rear end, this pair encourage you to load the tyres, point and shoot. Tractive, failsafe and damn effective in the wet - but ultimately not as satisfying.

For all their technical similarities, it’s actually refreshing to find there are fundamental character differences between this pair. If you like your sports sedan to be a bit of a brawler, you’ll want the Mercedes-AMG. We lean to towards the all-round athleticism of the Audi, but wouldn’t pick an argument with you – or your AMG – if you went the other way.

First published in the April 2017 issue of Wheels magazine, Australia's most experienced and most trusted car magazine since 1953.