It’s taken a bit of time, but manufacturers are slowly catching on to the fact that 4x4 ute buyers often have a few dollars in their pockets. Whereas the ute was once a no-nonsense workhorse, things are changing, and fast.

Ford’s Ranger is the nation’s favourite in this class and, in FX4 special edition guise, it gets a whole lot of extra gear over the XLT model it’s ostensibly based on. But is all the window dressing worth the extra coin?

Not so very long ago, floating the idea of a Ford Ranger being a better buy than a Toyota Hilux would have had you skittled off a construction project faster than turning up without the right protective footwear. These days the Ford’s superiority is a widely accepted fact. The Ranger is Ford’s best-selling vehicle in Australia and for good reason. Ford listened to what ute buyers wanted and priced the Ranger sensibly. 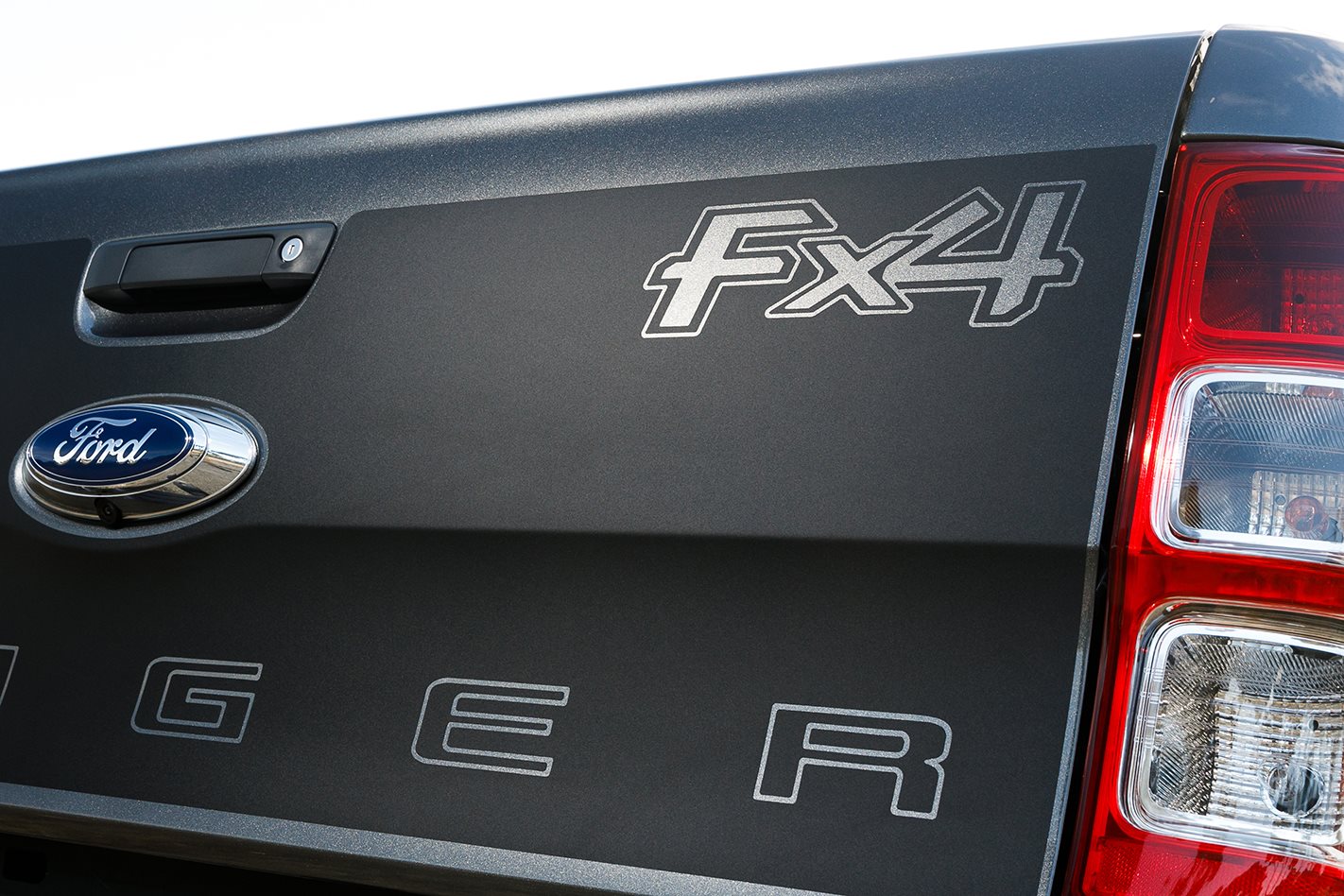 The thing is, sensible pricing doesn’t always equate to big margins. So Ford has attempted to tease away a little at what the market will bear. The results have not disappointed. Almost two-thirds of Ranger sales have been the top-end XLT and Wildtrak variants. It seems that Aussies can’t get enough of tricked-up pick-ups. To that end, Ford has added another model to consider, the FX4 special edition.

The Ford Ranger FX4 builds on the XLT with a black optics pack, some 18-inch ‘Stark Grey’ alloys, black roof rails and leather accented seats, monogrammed with the FX4 badge. That little lot tots up to an additional $3420, to which our test car added $550 worth of Magnetic Grey paint.

The engine’s a familiar one to Ranger buyers: a five-cylinder 3.2-litre diesel that drives all four wheels via either a six-speed manual or (as tested) a six-speed automatic transmission.

Let’s not beat about the bush – the Ranger FX4 looks good. That’ll be enough for some ute buyers seeking to one-up their mates. The 18-inch alloys and matte black sports bar are particularly nice touches and the monogrammed leather accented seats are also a cut above what you’d usually expect in a vehicle like this. And, unlike the Ranger Wildtrak model, there’s no orange in the cabin. That has to be a plus.

The FX4 can walk the walk too. With 470Nm of torque, a 3.5-tonne towing capability and 800mm water wading ability, the ritzy extras don’t detract from the ute’s no-nonsense fundamentals.

Likewise, you get a stack of standard equipment that until fairly recently was the preserve of flashy executive sedans. The Ranger features an 8.0-inch touch screen with voice-controlled sat nav, Apple CarPlay and Android Auto. That’s on top of tech like rear parking sensors, dynamic stability control and a four-wheel drive system that you can shift on the fly. 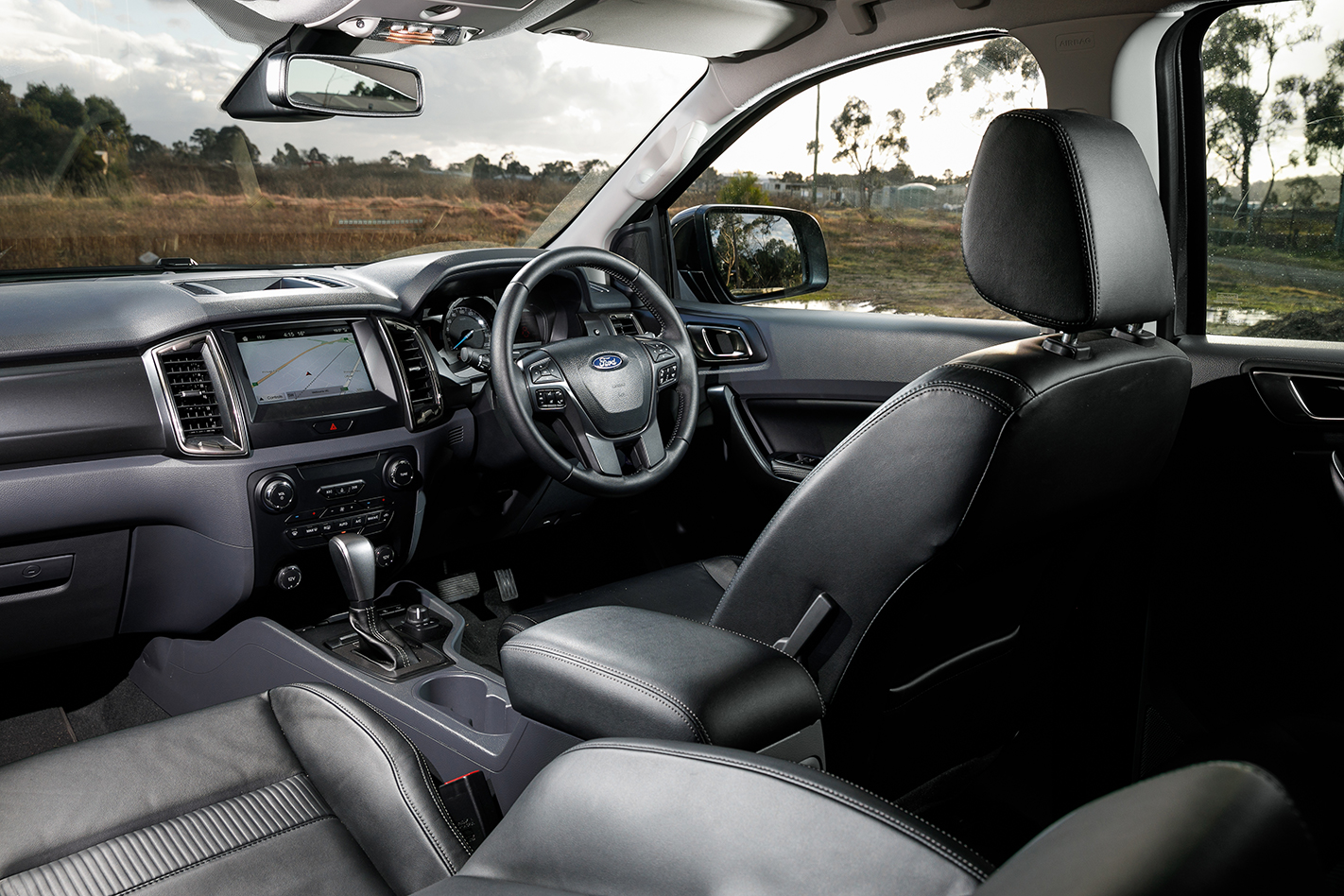 For a ute, the ride quality is good. Clearly if you’re comparing it with a passenger car it’s going to seem a little bouncy, but it’s got the Toyota Hilux and Nissan Navara licked in this regard. Holden Colorado and Mitsubishi Triton? That’s a tougher assignment, with the VW Amarok still boasting the best ride quality in this sector. Even on the bigger 18-inch alloys it’s not too unsettled on a country road.

Ford’s SYNC3 infotainment system is one of the best in its class. It’s not a particularly pretty system to look at, but in terms of functionality, it’s right up there. Like us, you’d probably prefer keeping your eyes on the road rather than trying to unearth functions that are buried in multiple touch screen menus. SYNC3 is your friend here.

There’s a reasonable amount of legroom in the back seats. All too often when manufacturers design dual-cab utes, the rear seats are the first casualty in trying to eke a few more millimetres of tray length or driver accommodation. A six-foot passenger can easily sit behind a six-foot driver in the FX4.

The engine isn’t particularly refined and requires a good bootful of revs to get the Ranger moving with any great alacrity. This results in so-so fuel economy. Ford claim an average of 8.7 litres per 100km. We saw just north of 11L/100km without driving the vehicle particularly hard.

The steering column only adjusts for rake and not reach. This can result in a legs-splayed driving position in order to get the wheel at exactly the right proximity to your body.

The automatic gearbox isn’t the sharpest tool in the box, often holding a gear for way too long, forcing you to lift the throttle in an attempt to prompt it to shift up. 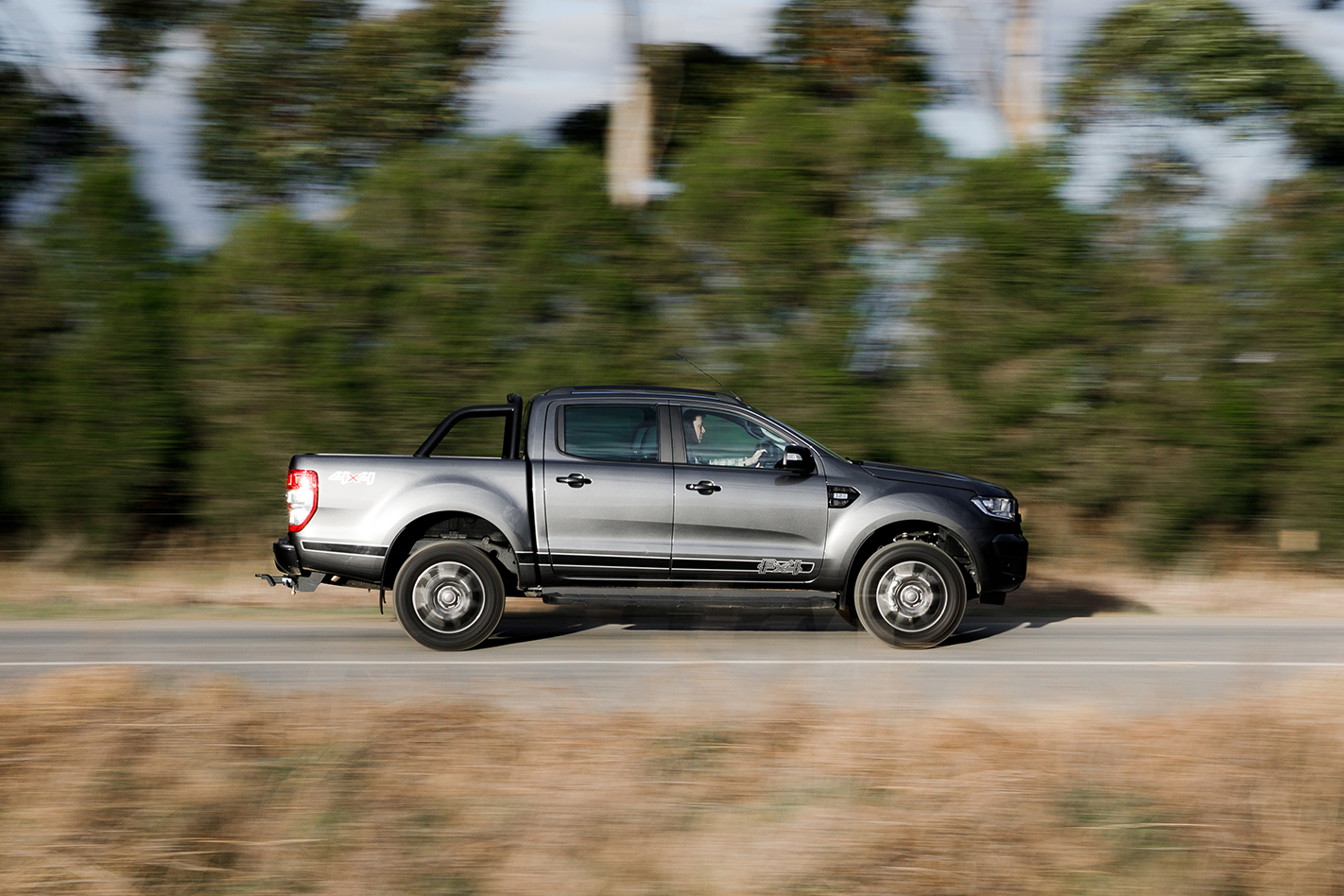 The value proposition isn’t exactly cut and dried for the FX4. Should you fancy the optional $800 Tech Pack (adding Forward Collision Alert, Lane Keeping Aid, Automatic High Beam Control and Adaptive Cruise Control), the FX4’s final invoice will be more than the ostensibly range-topping Wildtrak which features the Tech Pack inclusions as standard. And you’ll also be missing out on the Wildtrak’s heated seats, puddle lamps and roller tonneau for the tray.

The steering can feel unnervingly light at times for such a macho-looking vehicle. It’s accurate but it’s neither quick-witted nor particularly generous with feedback.

ANY OTHER CARS I SHOULD CONSIDER

If you’re in the market for a high-end ute, Volkswagen’s Amarok is a key contender, although Mercedes-Benz’s X-Class looks an intriguing entrant. The Holden Colorado in Z71 guise has the bling to compete with the Ranger FX4 and despite having a smaller engine, it has the edge in terms of straight-line speed. 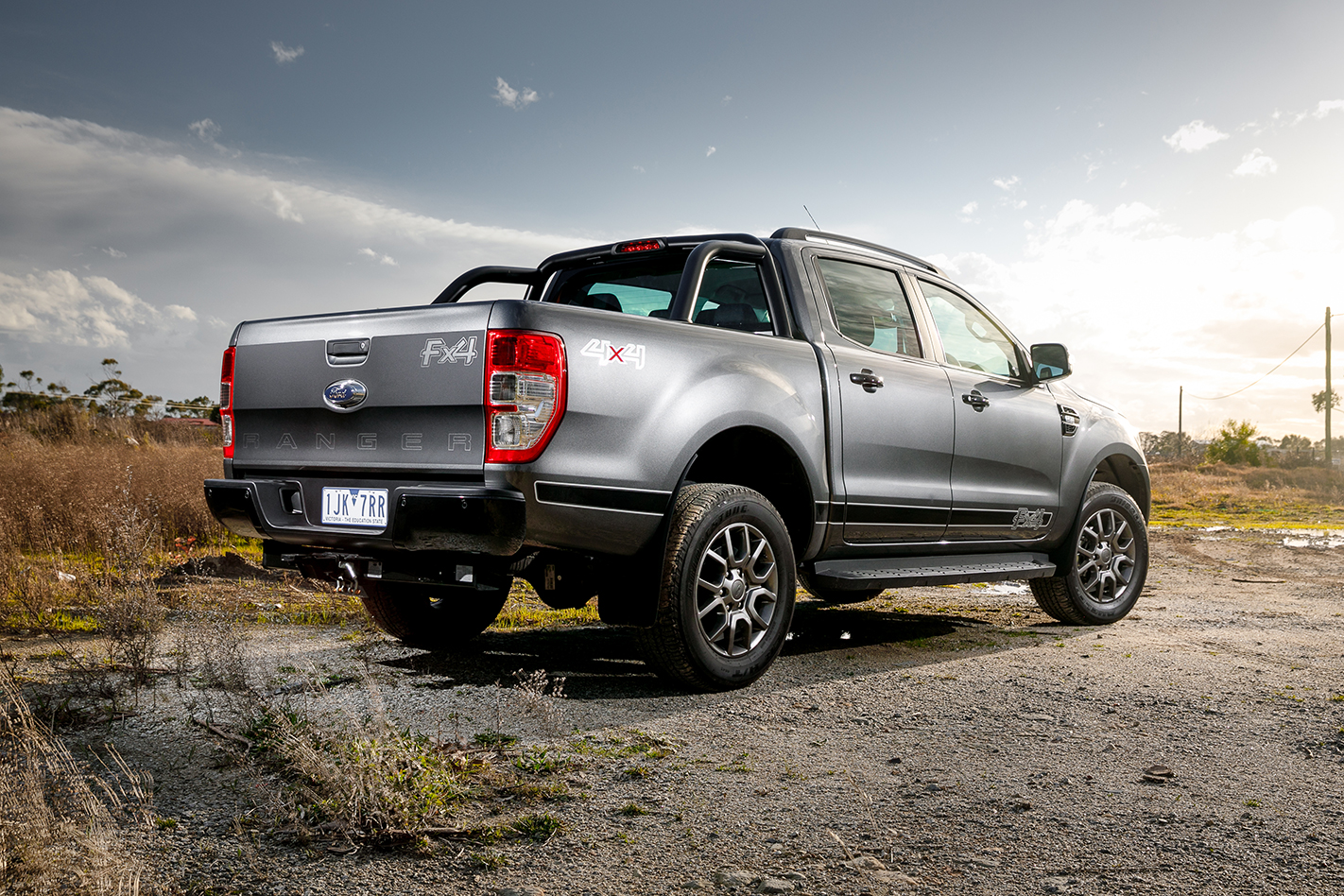 Special edition ute draws a bead on the cashed-up tradie

The unvarnished reality of the Ranger FX4 is that Ford is charging almost $3500 over the price of an XLT for what is ostensibly a black optics pack. Inch-bigger alloys, roof rails and leather seats are the key upgrades, which call into question the FX4’s value-add. Manufacturers seem to think there’s so much price headroom in the ute market that it’s a gold seam just waiting to be mined, but savvy buyers might want to look elsewhere in Ford’s range for a smarter deal. 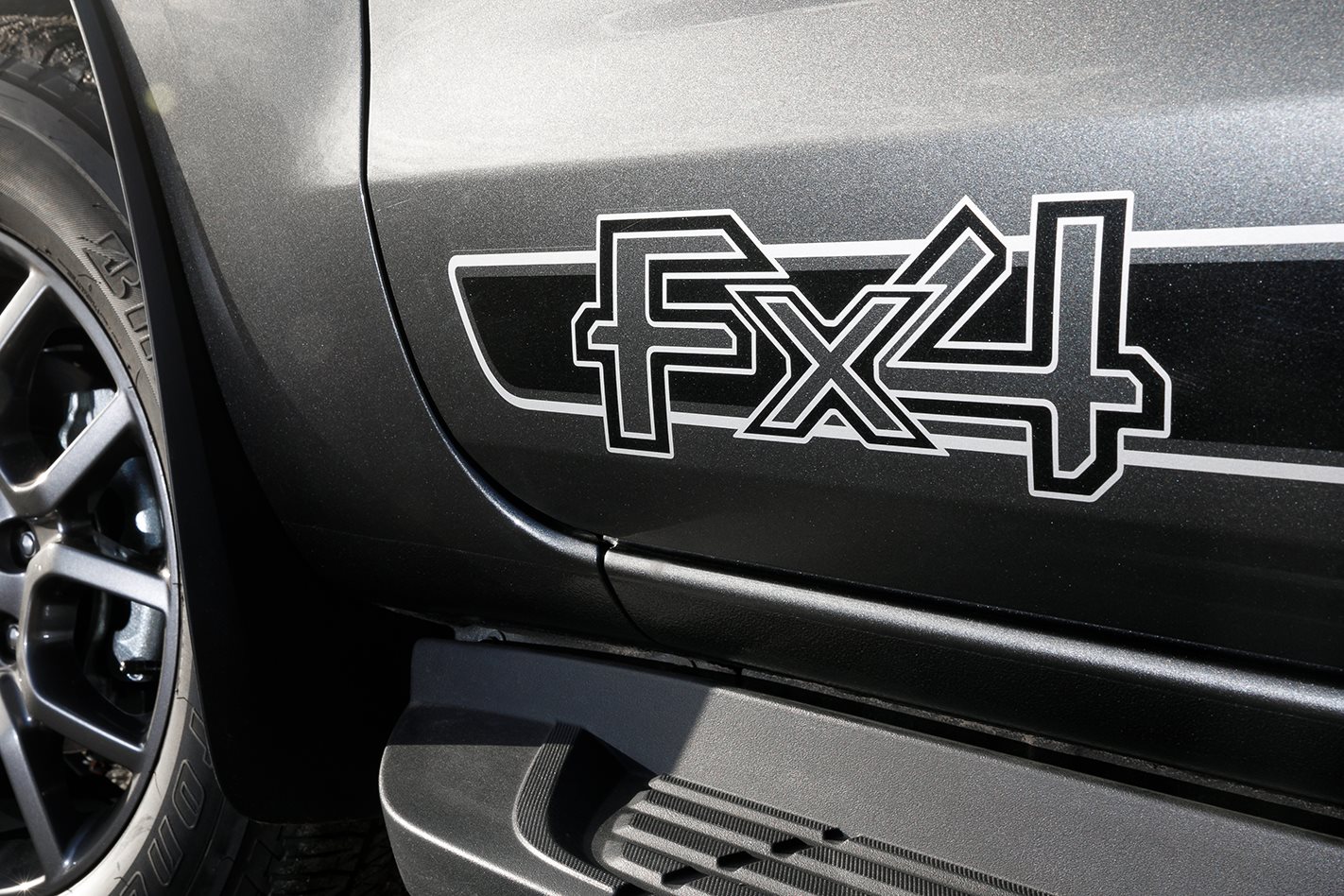 THAT the Ford Ranger is a better ute than the Toyota Hilux is a fact that takes some time to get used to. How do you go about beating the unbreakable legend? It turns out that doing the basics right like offering decent ride quality, a gutsy engine, strong value and keen utility are enough. It’s like Buster Douglas beating Mike Tyson by the simple expedient of stepping to the side to negate his bull-like power. Sometimes the most obvious solutions are hidden in plain sight.

Ford shifted almost 31,000 4x4 Rangers last year, and almost two-thirds of them were upspec XLT and Wildtrak versions. The success of similarly high-end versions of the Holden Colorado and Volkswagen Amarok coupled with Mercedes-Benz’s intention to join the fray with its Navara-based X-Class clearly has Ford convinced that the target market for these vehicles has a lot of disposable income looking for a new home. The FX4 special edition builds on the XLT with a black optics pack, some 18-inch ‘Stark Grey’ alloys, black roof rails and leather accented seats, monogrammed with the FX4 badge. 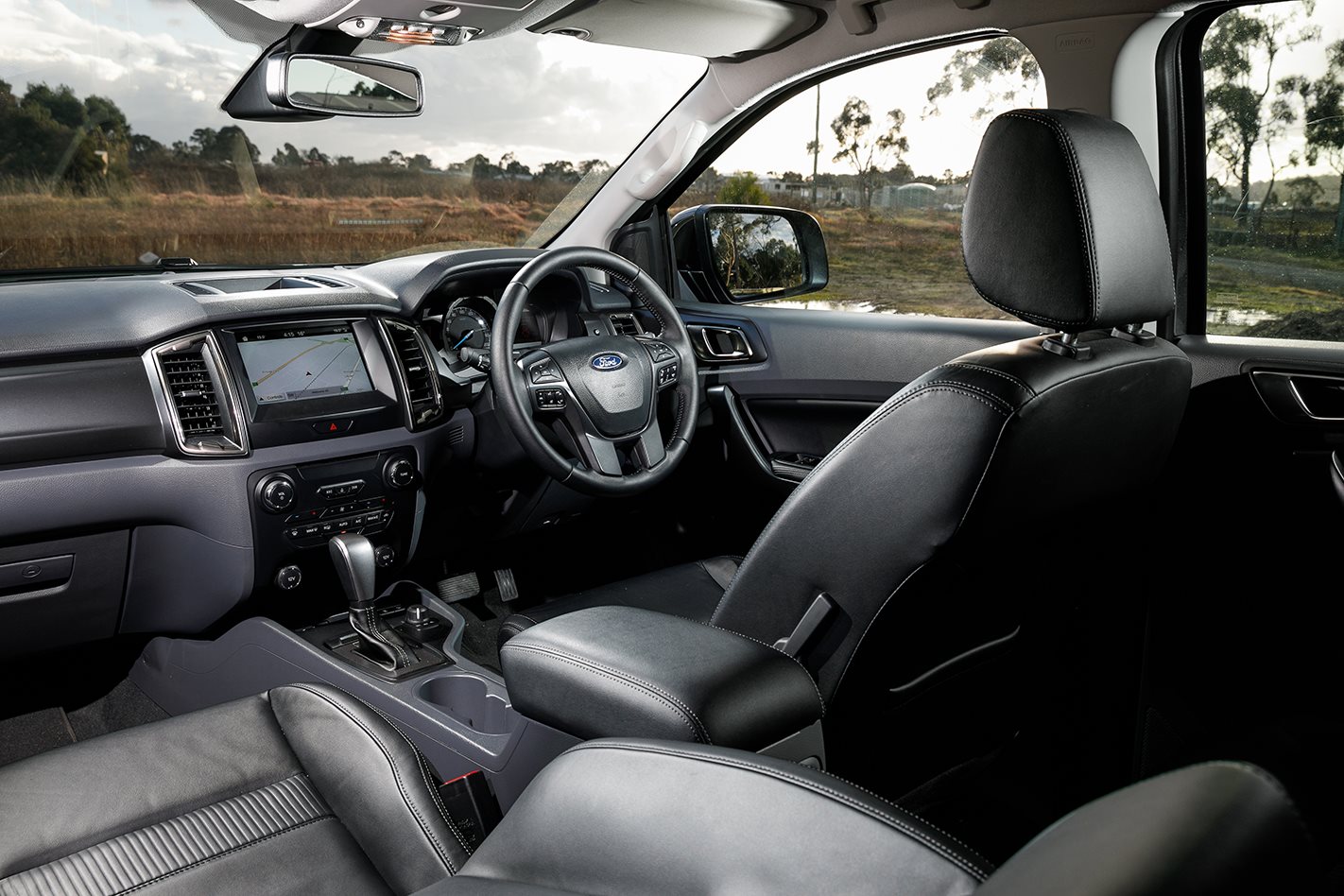 It’s hard to argue with the aesthetic. The FX4 looks squat and purposeful; the Magnetic Grey paint of our test car (a $550 option) even delivering a degree of subtlety for a car that looks to have had most of Ford’s options list plastered to it. Given that the smallest price difference between mechanically-identical trims of the Ford Everest is $6,000, is the FX4’s $3,420 impost over the  XLT really that insurmountable an ask?  It would appear not, given the rate that the 2200-vehicle allocation is disappearing.

Prospective FX4 buyers interested in adding the optional $800 Tech Pack (adaptive cruise control and lane departure assistance) to their purchase would do well to consider the range-topping Wildtrak version. This features those inclusions as standard and comes in at $125 less than a Tech Pack-equipped FX4. Plus you get features like heated seats, puddle lamps and a roller shutter for the tray. 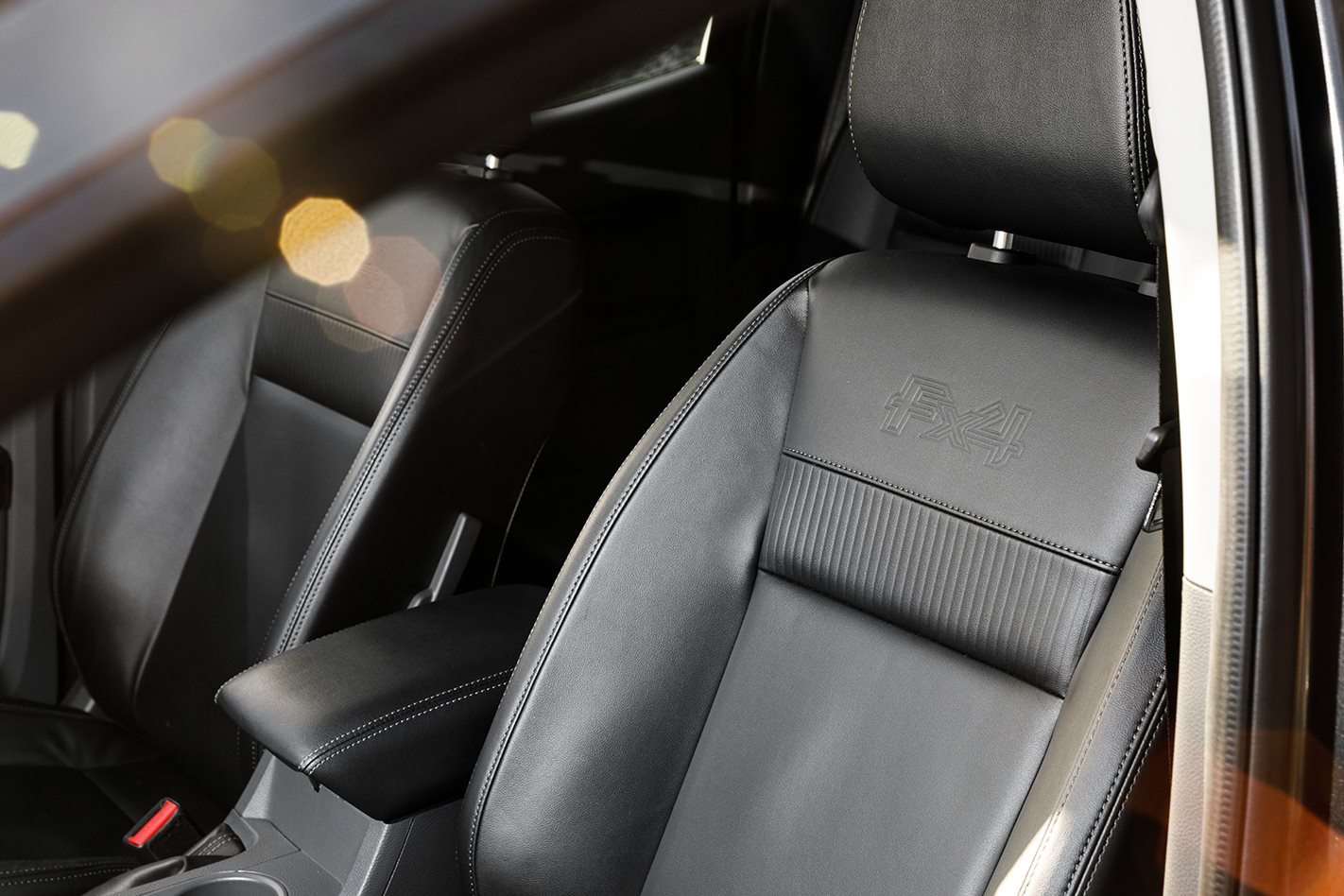 Like all premium PXXII Rangers, the FX4 is powered by a Euro5 compliant 3.2-litre turbo-diesel lump good for 147kW and 470Nm. It’s a pretty vocal thing with this weird sound when you roll off the throttle, like Darth Vader with catarrh. While the five-pot doesn’t have the muscularity of some of its rivals, the Ranger can maintain a decent pace cross country, helped by a ride quality which vies with the Amarok for the current best in class. How the leaf-suspended Ranger manages to ride better than the coil-sprung Navara is a bit of a head-scratcher. Other attractions? The SYNC3 infotainment system is a good deal cleverer than anything else in the class and the Ranger’s safety gear and towing capacity betters even the heavy-hitting Amarok V6.

And there’s the nub of the Ranger FX4’s appeal. The dressing drags punters in off the street. What keeps them coming back is that under the glitz it still feels an authentic working vehicle, all hard plastics, sibilant engine and no-nonsense practicality. The moment premium utes lose that authenticity, manufacturers will discover the price ceiling to this market extremely quickly. 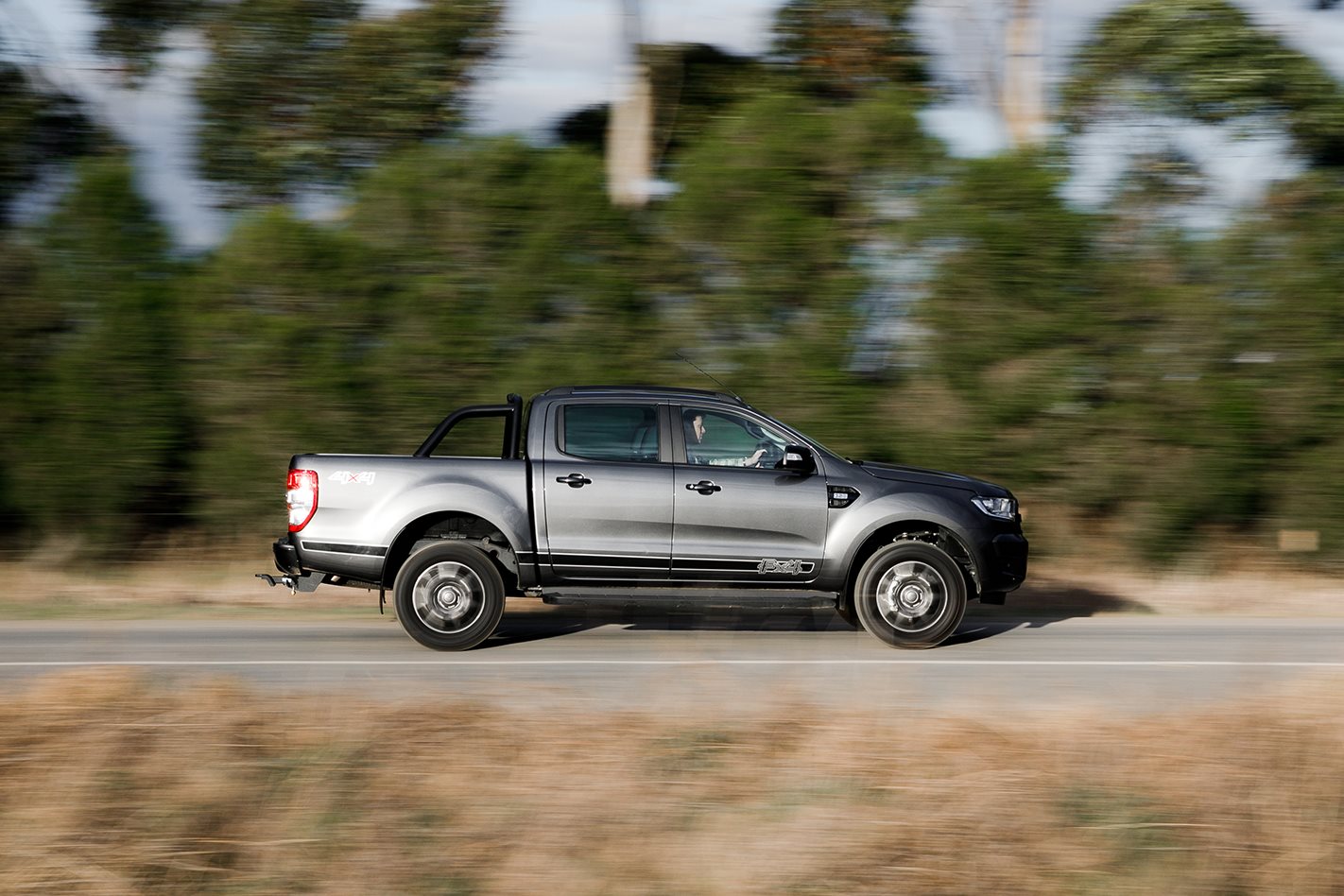 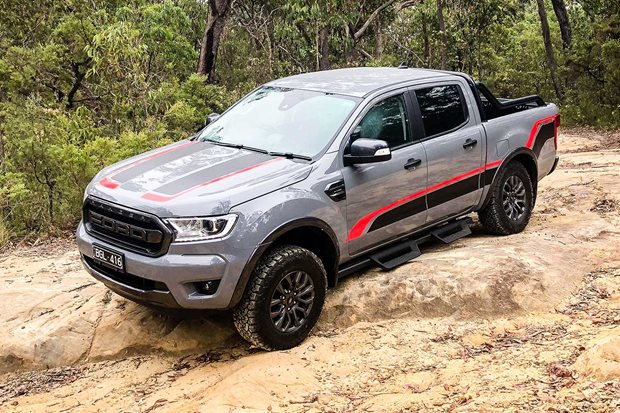